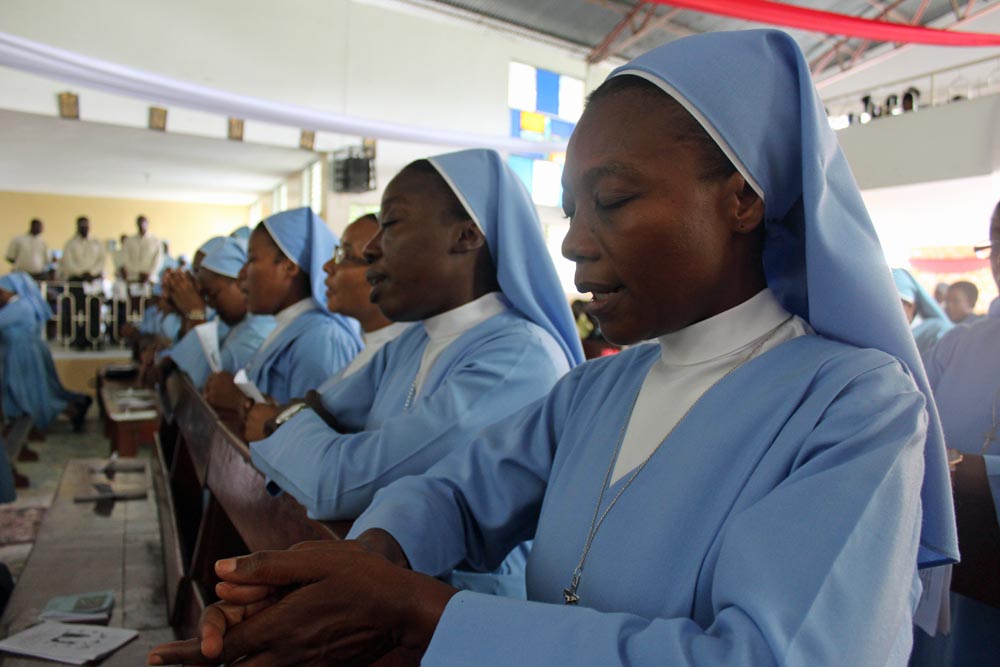 Sept. 14, 2017, was a day of celebration and prayer as three women professed perpetual vows as members of Haiti's Little Sisters of St. Thérèse of the Child Jesus. (GSR photo / Chris Herlinger)

At once joyous, inspiring and hopeful, the acclamation, sung in French at a service of perpetual profession, came on a sunny, mild day with no clouds, no winds and no seeming threats.

It was a day that belonged to God.

But it was also a day that belonged to Haiti's Little Sisters of St. Thérèse of the Child Jesus, a Haiti-based congregation that has faced and withstood numerous challenges in its seven-decade history but is looking toward the future with optimism, hope and a distinct sense of mission.

"We believe in God, and we put our faith in God, in the providence of God; God never leaves us," said Sr. Denise Desil, 66, the congregation's mother general, said in an interview in September before three Haitian novitiates took their perpetual vows. 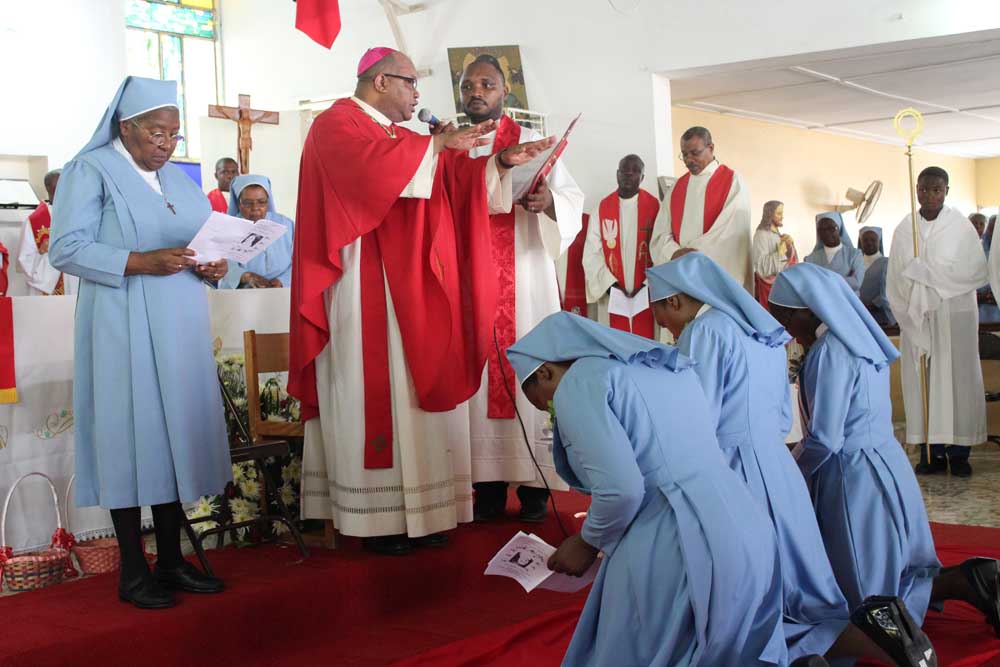 Sr. Denise Desil, 66, left, the mother general of the Haiti-based Little Sisters of St. Thérèse of the Child Jesus, and celebrant Bishop Ducange Sylvain at a September service of perpetual profession for three women. The service was held at the congregational chapel at Rivière-Froide, a suburb of the capital of Port-au-Prince. (GSR photo / Chris Herlinger)

Founded by Fr. Louis Farnese and the Rev. Mother Carmella Lohler in 1948, the congregation had the specific mission, according to a congregational history, of "giving relief to people in the poorest and most remote areas."

"This was a revolutionary concept at the time, akin to liberation theology," the history notes.

Today, a small portrait of the martyred Salvadoran bishop Óscar Romero hangs in the congregation's mission house in the southern community of Baradères, and Desil's face brightens at the mention of Romero.

"Somebody gave us that portrait. We liked the way Óscar Romero talked and took the position for the poor people," she said. He was martyred for his advocacy of those living in poverty, she added. "He talked about justice."

Romero also talked about the hope in faith, something that resonates deeply with Desil. One reason for that is that the congregation has nearly 175 members, and younger women continue to join the congregation. In addition to the three women who recently took vows, there are currently three postulants and two novices, and more half of the congregation's sisters are under 50 years old, she said.

The three women taking their vows in September, Carmelle Desrosiers, 44, Joselène Mahotiere, 37, and Célina Dalmacy, 37, all came to the congregation from earlier careers: nursing for Desrosiers and teaching for Mahotiere and Dalmacy. 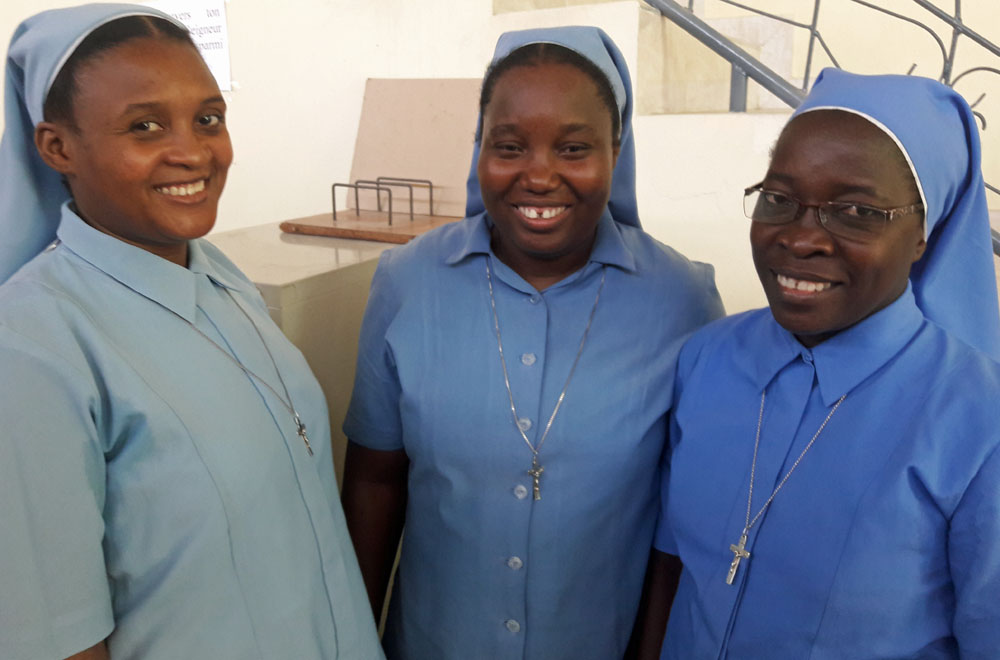 The three are from regions of rural Haiti where the congregation works in the areas of health, agriculture and education. All said the work of the congregation as advocates for Haitians living in poverty made a deep impression on them.

"I appreciated the work of the sisters among the peasant people," said Mahotiere, who is from Baudin, the locale of the first congregational mission.

"We pay special attention to the peasant people. This is our mission," said Dalmacy, who is from the Artibonite department, or province, in northwestern Haiti.

Desrosiers, who is also from Artibonite, said she knew sisters from other congregations before she met sisters from the Little Sisters of St. Thérèse of the Child Jesus. She said their work proved to be a motivation and the congregation's charism was "what I had been looking for," melding both service and spiritual grounding.

The women say they have had good models and mentors among the older sisters, including Sr. Zulmy Leon, 83, who is from a rural family in southern Haiti and whose accomplishments include organizing 24 farmers groups into a federation for farmer advocacy and education, and helping train 2,000 rural Haitians in agronomy.

Haiti, with a population of about 10 million, is becoming increasingly urban: About 2 out of 10 Haitians now live in the capital metropolis of Port-au-Prince. But a majority of Haitians still live in rural areas, according to the World Bank, and many of those now living in cities come from rural family backgrounds.

Many of the challenges Haitians face are the challenges of rural areas: drought or other climate extremes, like hurricanes; the effects of climate change; and the continued need for finding new water sources and access to wells for safe drinking water.

"There is a constant problem with water in Haiti," Leon said. 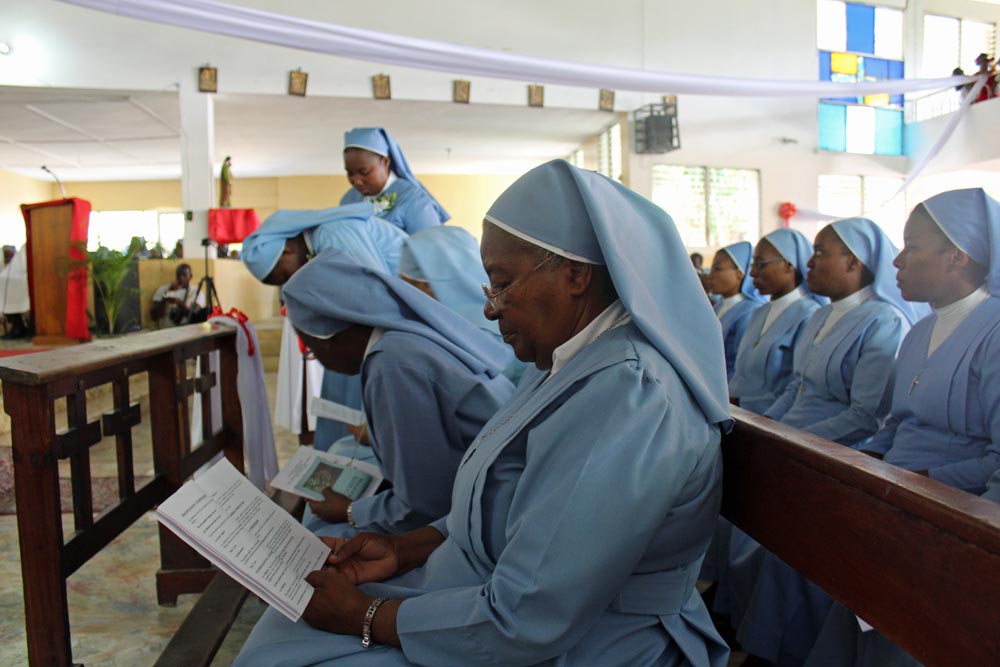 "We believe in God, and we put our faith in God, in the providence of God; God never leaves us," said Sr. Denise Desil, 66, the mother general of the Little Sisters of St. Thérèse of the Child Jesus. (GSR photo / Chris Herlinger)

Leon and the three younger women spoke to Global Sisters Report in a large common area of the congregation's motherhouse in Rivière-Froide, a suburb of Port-au-Prince, a place that promotes a "feeling of family," Desil said.

It is here the congregation has consolidated work in recent years following several tragedies stemming from Haiti's 2010 7.0-magnitude earthquake. Three sisters and a driver working for the congregation died when the congregation's small house in Port-au-Prince collapsed; a fourth sister died elsewhere. And 122 students perished when a congregation-run school in the western city of Carrefour collapsed during the quake.

It has taken years for the congregation to emerge from those events, and Desil acknowledges that they still sting.

"I was near the school the day of the earthquake, and it was terrible," she said. "I thought it was the end of the world."

But the tragedies also showed the need for the congregation to continue its work, and in places that are hard to access.

"We do something unique. We go to places where the others don't go," she said. "We have a very poor country, the poorest in the western hemisphere, and we have a lot of challenges in order to survive. We need to support people who count on us."

One locale that counts on the Little Sisters of St. Thérèse is Baradères, located in the Haitian department of Nippes, 130 miles west of Port-au-Prince. 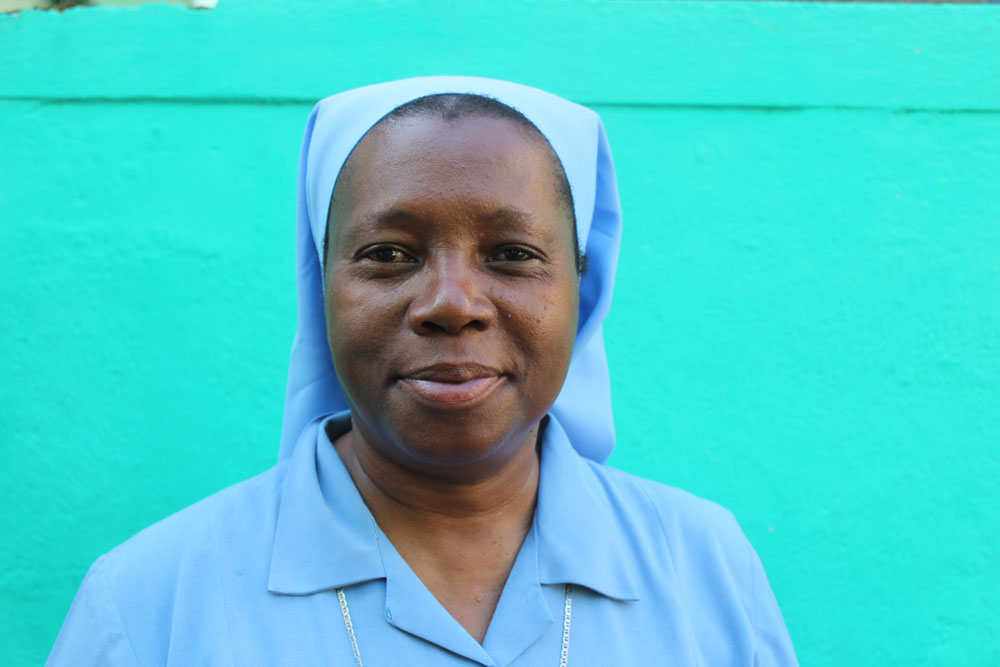 Sr. Marie Judith Prophete, who works as a nurse in a sister-run clinic in Baradères, and other clinic personnel see about 100 patients a week in a 12-bed clinic and hospital. Among the constants in the area are malaria and typhoid; immediately after Hurricane Matthew, they also included cholera, diarrhea and water-borne diseases. (GSR photo / Chris Herlinger)

Getting to Baradères requires an all-day drive along poorly paved mountain roads and switchbacks. But during the autumn rainy season, Baradères is heavily affected by rain, something all too evident in October 2016, when Hurricane Matthew hit large areas of southern Haiti, including Nippes.

"This may look like paradise, but after the hurricane, it was like hell," said Little Sisters of St. Thérèse Sr. Marie Judith Prophete, who works as a nurse in a sister-run clinic in Baradères.

Matthew dumped 3 feet of water on some areas, and it took the sisters based at the clinic about a week to clean up from flooding. Almost two dozen volunteers helped the sisters with cleanup, a tribute to the sisters' work but also an example of the sisters' need to rely on the community's goodwill.

In the past, the sisters' mission received regular assistance from a prominent humanitarian group, but the shipments of medical supplies that helped stock the clinic stopped because of poor road conditions, Prophete said, and the sisters are looking for other groups to fill the gaps. However, partnerships with other groups continue, including the Rockland, Massachusetts-based Medicines for Humanity, which named Little Sisters of St. Thérèse Sr. Jeanne Martha Pantal its 2017 Humanitarian of the Year for her training of other sisters in the areas of maternal and child health.

In Baradères, the clinic personnel, which includes Prophete and Dr. Rene Wyson, see about 100 patients a week in the 12-bed clinic and hospital. Among the constants in the area are malaria and typhoid; immediately after the hurricane, they also included cholera, diarrhea and water-borne diseases.

Those threats have not fully abated, Wyson said: "We are still facing a lot of sickness." 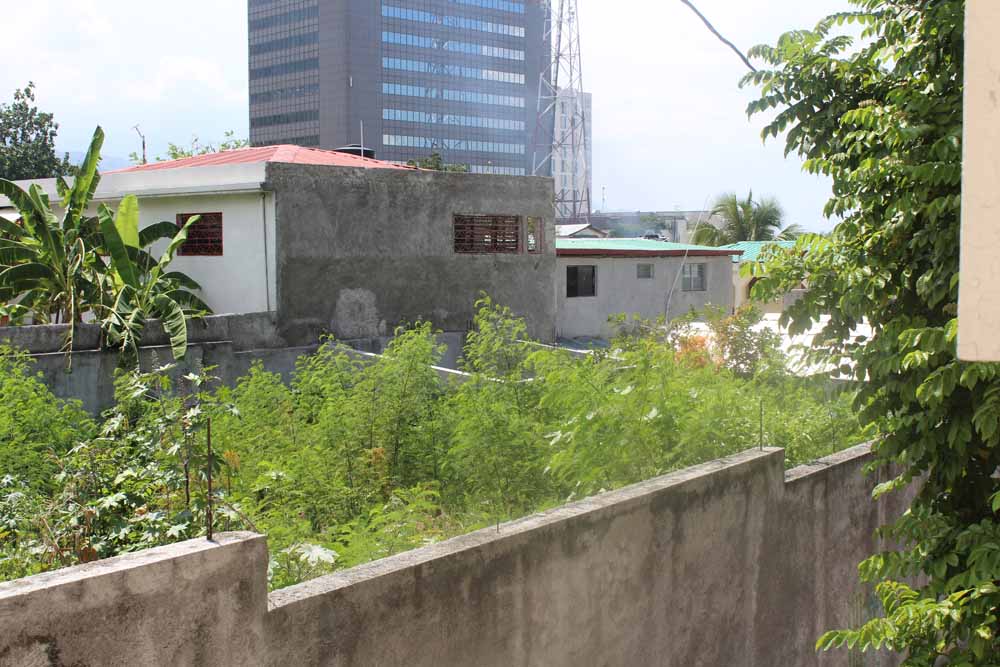 A small congregational house in Port-au-Prince used for mission work in the capital was lost in the earthquake, and the sisters would like to rebuild the structure. (Ulrick Louijeune)

Those are not the only challenges facing the sisters. A small congregational house in Port-au-Prince used for mission work in the capital was lost in the earthquake, and the sisters would like to rebuild the structure. Meanwhile, repairs to 10 mission sites affected by Hurricane Matthew continue, Desil said, with the congregation still trying to raise funds for repairs and rehabilitation.

"We're not finished with Matthew yet," she said.

Also needed are repairs and expansion to the motherhouse, which was originally built to accommodate a far smaller group of sisters. And in an April email, Desil said the congregation is hobbled by a lack of vehicles for their ministry.

"We have a big problem with transportation," she said. "We need a car for the [mother] house and an ambulance for the sisters" and their mission work. 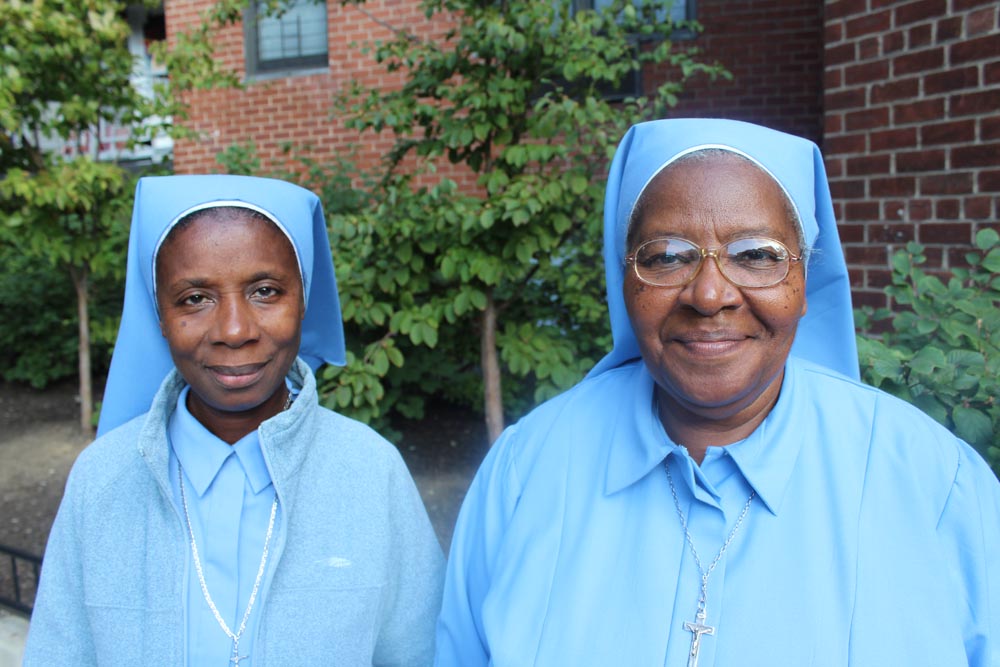 Desil rattles off the challenges with concern but also with a sense of enduring hope.

"We face the challenges because this is our country; we were born and raised in it, and we have great faith and hope in God. We enjoy our life here. It's hard, but we enjoy it." She paused, contemplating the gift of a quiet moment and a gentle breeze on a fall afternoon.

"God shows us a way to survive," she said. "We are Haitian."

At the Sept. 14 service of perpetual vows, the spirit of those words came alive when, at the end of the ceremony, families, friends and fellow sisters sang out in Haitian Creole and with firm affirmation and deep feeling a celebratory closing hymn:

Superhero Assumption Sisters use their 'powers' to empower others

How do we hold the pain?