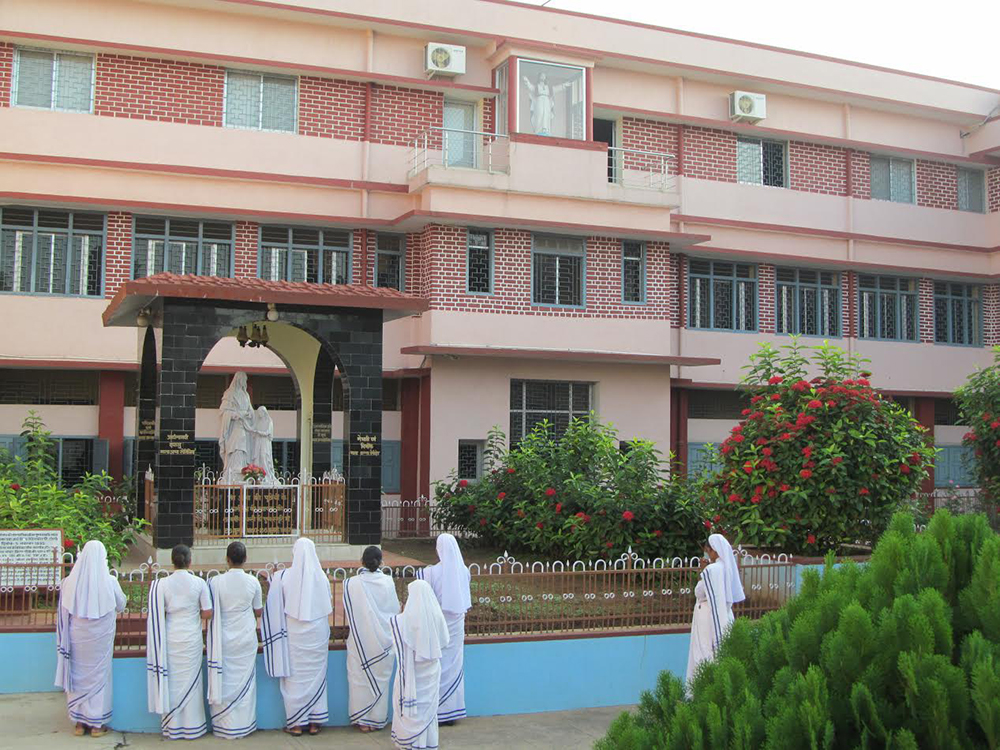 Junior sisters of the Daughters of St. Anne pray in front of a grotto, where the mortal remains of Bernadette and co-founders are buried at the congregation headquarters in Ranchi, eastern India. (Saji Thomas)

Ranchi, India — India's tribal church is upbeat after the Vatican approved the process to canonize a nun from the community last summer.

The first tribal saint is "a sign of positive change in the Catholic Church in India," says Cardinal Telesphore Placidus Toppo about the launch of the process for Mother Mary Bernadette Prasad Kispotta, the founder of the Daughters of St. Anne, Ranchi.

Toppo, the first Asian of tribal descent to become a cardinal, is the archbishop of Ranchi, capital of Jharkhand state, the nerve center of India's tribal church and the congregation's base.

The Daughters of St. Anne, Ranchi, is the first congregation founded by a tribal sister for tribal girls in eastern India. 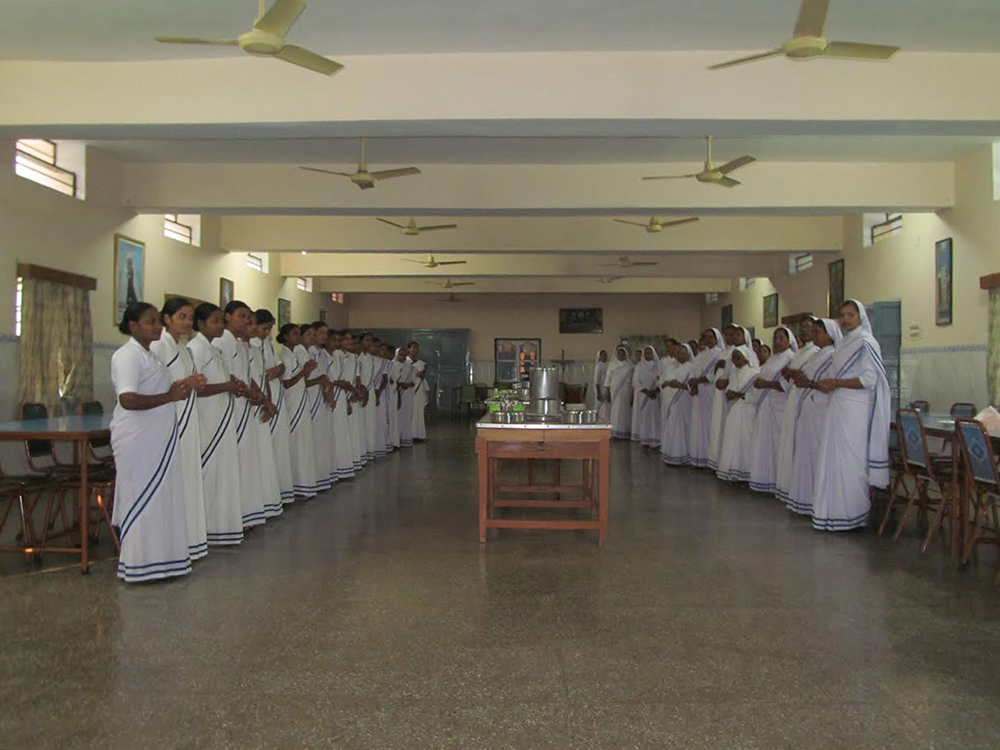 Sisters line up for breakfast at the mother house of the Daughters of St Anne in Ranchi, India. (Saji Thomas)

The nun, who is popularly known as Mother Bernadette, died of tuberculosis on April 16, 1961, at the age of 82. She was declared a Servant of God on Aug. 7, 2016, the first in the four-stage canonization process.

The 77-year-old prelate points out that Bernadette started the congregation when foreign missionaries working in the region refused to admit tribal people to seminaries or convents.

The prelate points to an incident in 1912 when four tribal boys were sent to the papal seminary in the city of Kandy in Sri Lanka (then Ceylon) to become priests. The seminary superior sent them back, saying it would take another 100 years for tribal people to understand Christianity.

However, within a century, the tribal church has produced several bishops and a large number of priests and nuns. Toppo headed the Indian church as the president of the Catholic Bishops' Conference of India from 2004 to 2008.

Toppo says the congregation that Bernadette defied opposition to start for tribal girls has flourished, with its members now serving other communities in India and overseas.

St. Anne Superior General Mother Linda Mary Vaughan says her congregation now has 1,029 members residing in 142 houses in India, eight in Italy and one in Germany.

"When our founder becomes a saint, the tribal will have a saint of their own," Vaughan, a Eurasian, says. 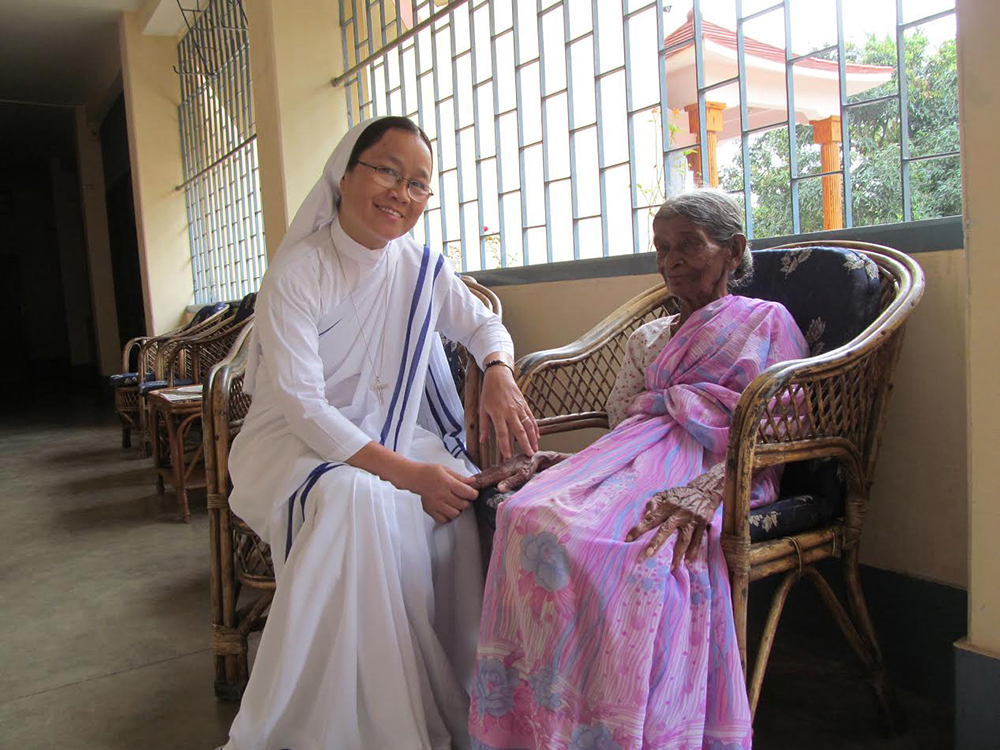 Fr. Stanislaus Tirkey, secretary of the Indian bishops' office for tribal affairs, also shares this view. "It is a matter of great pride for the tribal community that one of them is on the road to sainthood," says the priest, who serves in New Delhi. Bernadette's sainthood will become a symbol of unity and deep faith for tribal people, who, Tirkey says, form nearly 10 percent of India's 19 million Catholics.

Vaughan says Bernadette's canonization would encourage the tribal community to aspire for holiness in their situations. Although the tribal people venerate all saints, they would relate to Bernadette better because she had grown up in the same conditions as theirs. The other saints are all outsiders, she adds.

India has so far produced six saints, including Mother Teresa of Kolkata, who was canonized in Rome on September 4, 2016. In 1947, Teresa became an Indian citizen.

The Indian saints come from the country's western and southern coastal regions that trace their Christian roots back for centuries. On the other hand, tribal people of eastern India received the faith only in the second half of the 19th century.

The first Indian to become a saint was Gonsalo Garcia, who was born of Portuguese parentage in Bassein near Mumbai, western India. In 1862 he was canonized, 265 years after he was martyred in Japan.

Three saints belong to Kerala, a southern Indian state where St. Thomas the Apostle is believed to have preached the faith. However, the church there had to wait until 2008 to get its first saint – Alphonsa, a Franciscan Clarist nun, who died in 1946. The other two saints from Kerala are Fr. Kuriakose Elias Chavara and Sr. Euphrasia Eluvathingal, canonized in 2014.

Goa, where Portuguese missionaries such as St. Francis Xavier introduced faith in the 15th century, has produced Joseph Vaz, the apostle of Sri Lanka. He died in Kandy in 1711 at age 59, and Pope Francis canonized him on Jan. 14, 2015, at Colombo.

India also has a few people, who have been beatified, the penultimate stage in the canonization process. However, none is from a tribal background. 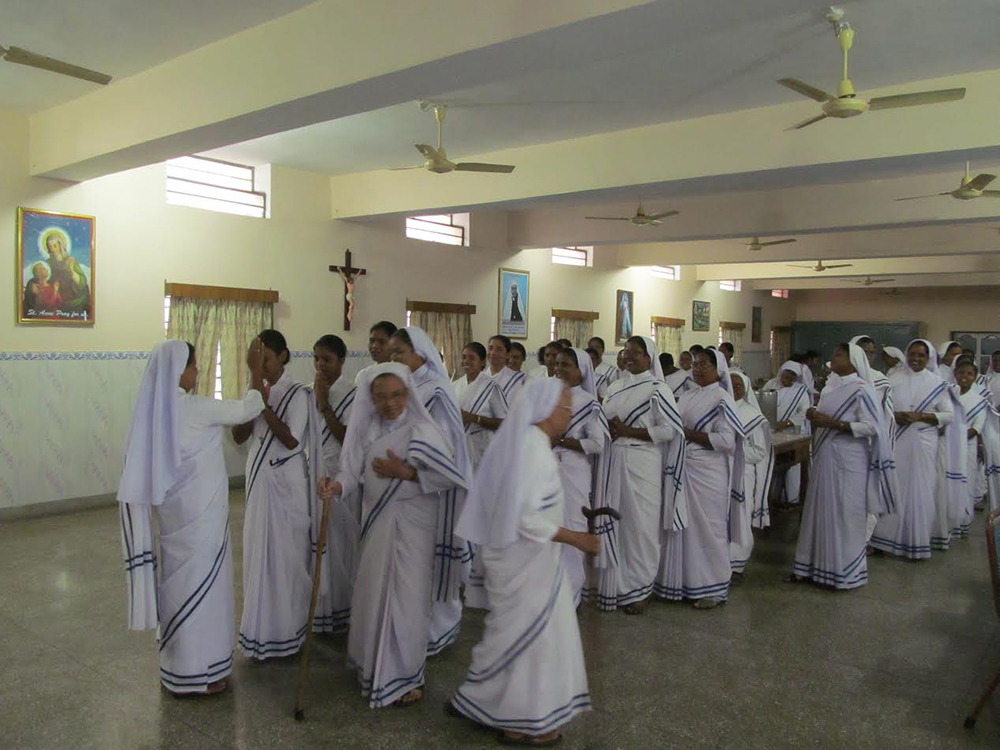 Sisters are blessed by their superior before breakfast at the mother house of the Daughters of St Anne in Ranchi. (Saji Thomas)

Bernadette's canonization proceedings will help the church in the tribal region to thrive further, says vocation promoter Sr. Rajkishori Kiro of the Daughters of St. Anne. "We will have more vocations for sisters and priests," she says. According to her, their congregation suffers no dearth of vocations, unlike other orders working in the region.

"We have easy access to people and their homes, since we are part of their community and know the culture and practices as compared to the missionaries from outside," she explains.

Jesuit Fr. Alex Ekka, who helped translate Bernadette's memoirs from Hindi to English, hails her as the "embodiment of social transformation" among tribal people.

She challenged tribal traditions, such as compulsory marriage, braving even a death threat from her father, explains the priest who now directs Ranchi's Xavier Institute of Social Service. "She is a true beacon of hope for the oppressed indigenous community across India," he says.

Bernadette was born on June 2, 1878, in a Lutheran family, at Sargaon, a village on the outskirts of Ranchi. Her father, Puran Prasad Kispotta, of Oraon tribal origin, was a court official and her mother, Paulina Kispotta, a homemaker who died soon after her birth.

Bernadette was taken care of by the wife of her father's elder brother. She was baptized as Christ Anandit Ruth. Her father married when she was 2. When his second wife also died, he married a third time.

The family became Catholic when Bernadette was 10 and she was sent to a boarding school in Ranchi managed by the Loreto nuns.

Ekka says Bernadette's memoirs narrate how she withstood her father's pressure to get married. She wrote to her father from the boarding school that she wanted to remain a virgin. He replied that, if she did not marry, he would shoot her and then kill himself.

When she turned 16, her father brought her home to marry her off. When she refused, her father told the relatives to make her understand or he would do as he had threatened. The relatives hid the guns, and her brothers helped her to run away from home.

The memoirs also note that Bernadette was inspired by the Loreto Sisters, who had left their homes in Europe to serve the tribal community in eastern India. She decided to do the same. 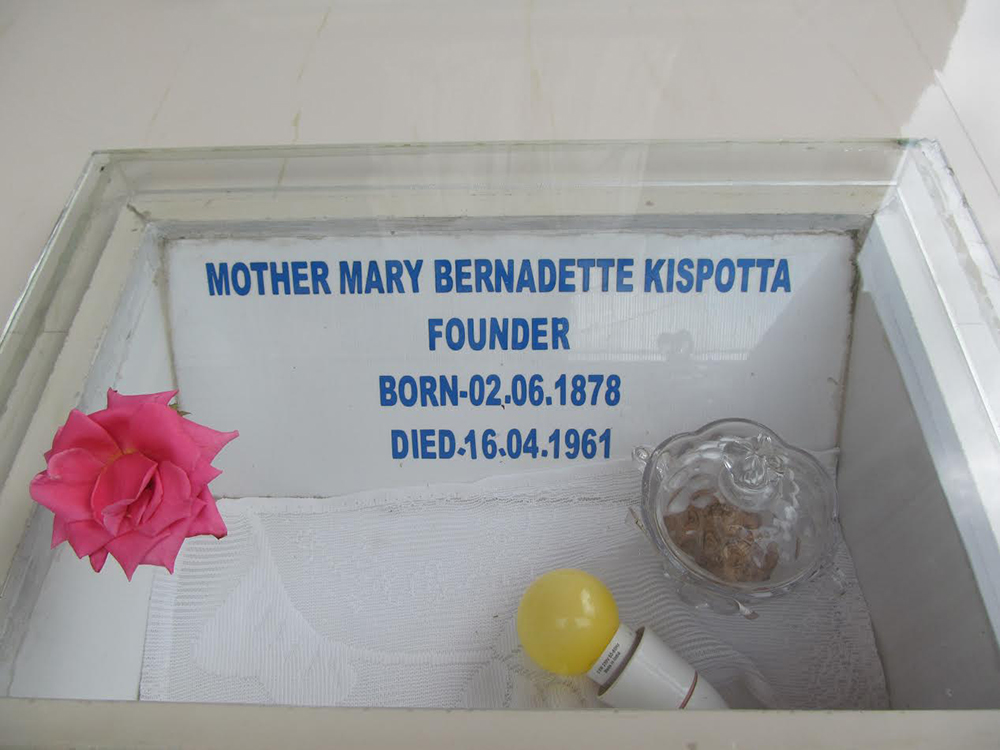 The relics of Mother Mary Bernadette Kispotta are preserved at the Daughters of St Anne generalate in Ranchi. (Saji Thomas)

"Even before becoming a nun, Mother Bernadette nursed people dying of cholera and famine without caring for her life," Ekka explains.

Seeing her commitment, Jesuit Archbishop Paul Goethals of Calcutta, whose jurisdiction covered the tribal belt, allowed her to start a congregation. Her initial associates were her relatives — Cecilia, her stepsister, and cousins, Veronica and Mary.

Bernadette founded the congregation on July 26, 1897, and chose "Ablaze with the love of Jesus" as its motto. She wanted her nuns to lead a Christ-like life among the poor and downtrodden and foster human dignity and respect among all. Today, the congregation is engaged in education, health care and social work as part of its evangelization.

On Nov. 5, 1995, the congregation shifted the mortal remains for the founding members from the archdiocesan cemetery to its headquarters. Since then, the nuns celebrate that date as their foundation day.

Ekka says Bernadette's canonization will help others to respect the tribal people's deep faith. The Indian church's future is with tribal people, and a saint of their own will further boost their morale, he asserts.

The priest, of Oraon tribal origin, also says that, until recently, his people lived in remote villages inside forests and seldom got the opportunity to study and grow with other communities. This led to their backwardness.

"But now the situation is fast changing and they are getting educated. Many educated boys and girls are joining convents and seminaries, which is a good sign for the church," he concludes.

Adoptive parents nervous after raids of Missionaries of Charity homes

The future needs us to say 'Yes'