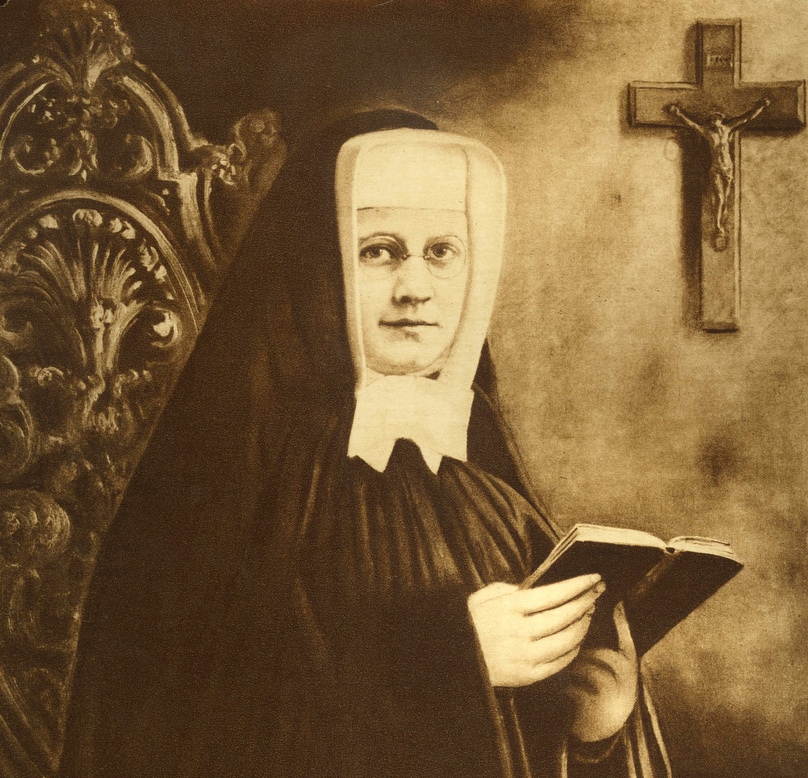 Sr. Miriam Teresa Demjanovich, a Sister of Charity who died at age 26 in 1927, will be the first American to be beatified in the United States. Cardinal Angelo Amato, prefect of the Vatican Congregation for the Causes of Saints, will be the main celebrant o f a special Mass Oct. 4 at the Cathedral Basilica of Sacred Heart in Newark, N.J. She is pictured in an undated portrait. (CNS photo/courtesy of Sisters of Charity of St. Elizabeth)

Newark, New Jersey — Although Sr. Miriam Teresa Demjanovich was personally unassuming, the spiritual impact she had on other Sisters of Charity of St. Elizabeth was so unmistakable that they began the effort to have her canonized soon after her May 8, 1927, death in Paterson.

Her cause will advance Oct. 4, when she will be declared Blessed Miriam Teresa at a beatification Mass at the Cathedral Basilica of the Sacred Heart in Newark. She will be the first American to be beatified in the United States.

Cardinal Angelo Amato, prefect of the Congregation for the Causes of Saints, will celebrate the Mass, joined by Newark Archbishop John J. Myers, Paterson Bishop Arthur J. Serratelli and Bishop Kurt Burnette, head of the Byzantine Catholic Eparchy of Passaic.

The church leaders represent local churches that all claim the daughter of Slovakian immigrants – she was born in Bayonne, baptized in the Eastern Catholic church and educated at St. Elizabeth College in Morris Township, where her remains are entombed in the chapel of her congregation's motherhouse.

Cardinal Amato will read the declaration of beatification near the beginning of Mass after a short biography is read and a portrait of her is unveiled.

Many Sisters of Charity plan to attend the liturgy, which will include a procession with a reliquary containing locks of Demjanovich's reddish brown hair, cut after her death of appendicitis at age 26.

Sister Miriam was known for her bad eyesight, and her intercession was invoked for Michael Mencer, a New Jersey boy who was going blind. His complete cure in 1964 was authenticated by the Vatican as having no medical explanation and was endorsed by Pope Francis in December.

In general, one confirmed miracle is needed for beatification and a second such miracle for canonization.

The youngest of seven, Demjanovich delayed college to care for her invalid mother, who died when "Treat" – as Demjanovich was called – was 18. Because of her poor eyesight, she was rejected by the convent of contemplatives she wanted to enter before she joined a teaching community.

"Miriam's life of aligning her life to the will of God is a model for all of us," said Sr. Mary Canavan, a former general superior of the Sisters of Charity of St. Elizabeth who is the fourth sister to serve as vice postulator of Sister Miriam's cause.

"I don't know if we need another saint in the church per se, except that her message that we all are called to holiness is significant to everyone in this troubled world, because it will take all of us to help bring about the reign of God," Sister Mary told the New Jersey Catholic, Newark's archdiocesan magazine.

Canavan also noted that Demjanovich embraced selflessness and had an acute awareness of God's presence in her life.

Because she was baptized in the Eastern Catholic church, her cause also is championed by the Eparchy of Passaic, which has jurisdiction over the Eastern churches from Maine to Florida. Also endorsing the cause is the Archdiocese of Newark, where Bayonne is located, and the Diocese of Paterson, whose territory includes the Chapel of the Holy Family in the Convent Station section of Morris Township, where Sister Miriam's body is entombed.

Sister Miriam was said to be aware of a special call at age 3. "Even before she entered the Sisters of Charity, she was living a saintly life," Sister Mary said.

After graduating second in her class from Bayonne High School in 1917, she cared for her mother and her family for two years before enrolling at the College of St. Elizabeth in Convent Station.

She majored in literature and graduated in 1923 with highest honors "but was in a state of perplexity as to the future," according to a biography by Sister Mary Zita Geis, a Sister of Charity.

Demjanovich was drawn to a contemplative Carmelite community in New York but was rejected because her poor eyesight would have prevented her from helping with the sewing of the liturgical vestments the nuns made to support themselves.

The Sisters of Charity hired her to teach Latin and English at the Academy of St. Aloysius in Jersey City, which closed in 2006. She left teaching to care for her ill father, who operated a shoe repair business and after he died, she entered the Sisters of Charity novitiate in 1925.

In the winter of 1927, she was hospitalized several times and so, when she complained of pain just a few months later, her superiors suspected hypochondria. When she was again hospitalized, it was for acute appendicitis. She died just after taking her vows as a fully professed sister.

Only after her death did confidantes reveal she had described having a vision Mary in her sophomore year and of walking with St. Therese, which she occurred during her novitiate.

On her body's return to Convent Station from the hospital, one of the sisters cut locks of her hair. After her burial, visitors began chipping pieces from the granite cross at her grave.

Canavan said her work on Demjanovich's cause has helped her to better understand the Gospel message "Many are called, but few are chosen," which she said is embodied in Demjanovich, an example of living a holy life.

[Al Frank is editor of the New Jersey Catholic magazine and associate publisher of The Catholic Advocate, the news outlets of the Archdiocese of Newark.]

Wonder in the wilderness

Why we stay: 'A journey that stretches far beyond one's life'