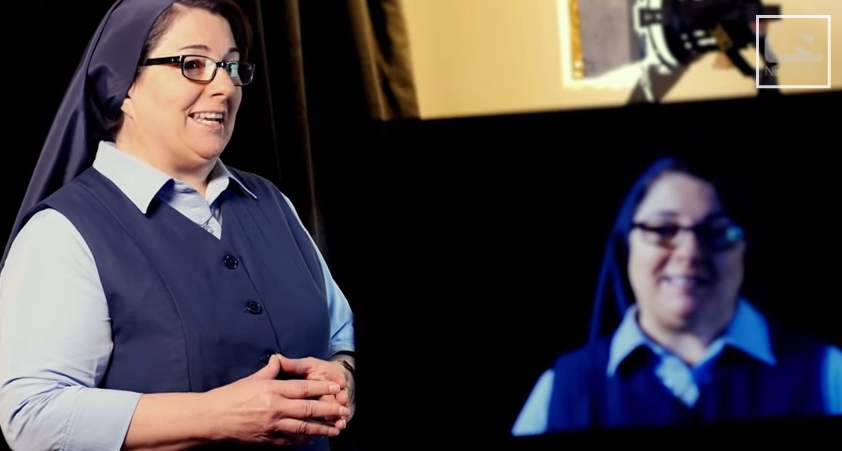 Screenshot of Sr. Rose Pacatte on her show The INNdustry with Sr. Rose on the IN Network. (TheINnetwork.org, via YouTube)

Watching the parade of stars and agents and handlers pass her by she wondered if anyone would stop and talk to her.

“Who expects to see a nun there?” she figured.

When Paula Newsome, one of the movie’s stars, walked past, she assessed Pacatte in her blue Daughters of St. Paul habit and asked: “Are you really a nun?”

The ice finally broken, Pacatte ended up interviewing Newsome, Costner and their co-star Octavia Spencer for her TV series, “The INNdustry with Sister Rose,” from the sidelines of the red carpet.

On Saturday, Pacatte takes center stage at an even bigger Hollywood event – the annual Golden Raspberry awards, better known as The Razzies.

For 35 years the tongue-in-cheek Razzies have “honored” the worst of Hollywood – bad acting, bad writing, bad directing, bad movies. Think of them as the opposite Oscars. In fact, the Razzies traditionally take place the night before the hallowed Academy Awards.

This year the Razzies will give a new “Redeemer” award to an actor who has made up for his or her past transgressions against cinema with better work.

Pacatte will present the award.

“Nuns are all about redemption, right?” said Pacatte, who writes reviews on her Patheos.com blog, “Sister Rose at the Movies,” and for the National Catholic Reporter.

“Our culture is a redemptive culture. We like a comeback kid. Everybody makes mistakes and everybody deserves another chance.” 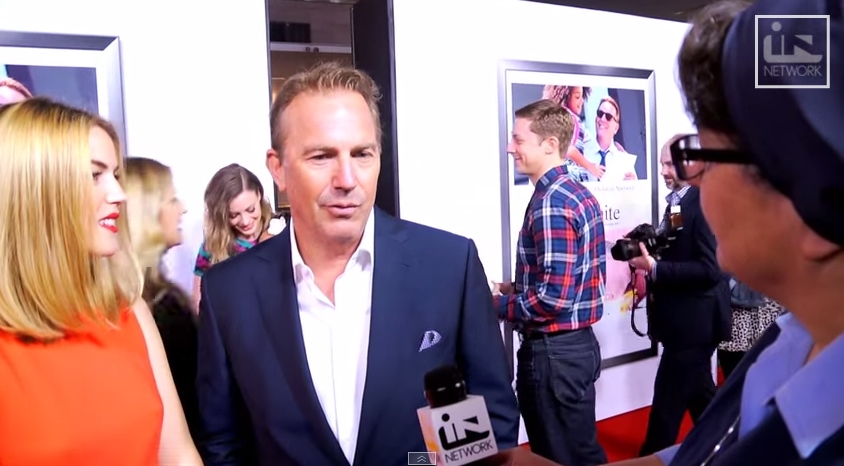 Screenshot of Sr. Rose Pacatte talking to Kevin Costner outside of the premier of “Black or White,” from The INNdustry with Sr. Rose on the IN Network. (TheINnetwork.org, via YouTube)

Pacatte is the perfect person to hand out the new award, said Mo Murphy, co-owner and executive producer of the Razzies.

Not only does she have the journalistic credentials – Pacatte is director of the Pauline Center for Media Studies – she also recognizes good filmmaking, said Murphy.

The Razzies producer recalled The New York Times profile of Pacatte from 2013 that noted how sister reviews movies based on how they shed light on the human experience.

Pacatte certainly has a lot of comedic fodder to work with for Saturday night’s event. Ben Affleck, Jennifer Aniston, Mike Myers, Kristen Stewart and Keanu Reeves are the Redeemer nominees. The winner will be chosen by votes cast, appropriately enough, on the movie review website RottenTomatoes.com.

Pacatte will write her own introductions for each nominee and has been busy in recent days building the case for each of them.

That’s easy for her do for Affleck. Not just because he is, as she said, “easy on the eyes,” but because he’s a good filmmaker who “God has blessed with many talents.”

She has seen nearly all of Affleck’s movies. Back when some people didn’t embrace his work she did.

Then he made “Gigli.”

“It was painful,” Pacatte said of the 2003 stinker of a movie that Affleck made with Jennifer Lopez.

Affleck’s road to redemption runs through the 2012 thriller “Argo,” in which he starred and directed so well that some people complained when he wasn’t nominated for an Oscar for his work behind the camera.

On the other hand, Pacatte was no fan of his latest work, the critically acclaimed “Gone Girl.”

"I hated Gone Girl, though not because of the acting. There was not one likable person in it and it was really violent."

Why do good actors go bad?

“Sometimes these guys want to work and so they do take stuff that doesn’t reflect their talent very well. I can understand that, I do,” said Pacatte. “I’ve lived here so long and you meet so many people who are worthy actors . . . but they have a family to support.”

Former “Friends” star Aniston, a four-time Razzies nominee, is up for the Redeemer based on her performance last year in “Cake,” in which she played a woman suffering from chronic pain.

Pacatte hadn’t seen “Cake” yet – one of the movies she still needed to watch before Saturday – but pronounced the dramatic turn “something that is worthy of her.”

As Pacatte describes it, Aniston’s biggest sin is making dumb movies. “I don’t think they’re giving her good projects,” she said. “I just stopped reviewing her.”

Pacatte also didn’t see the 2013 critically acclaimed documentary “Supermensch” directed by Myers. But the film about Hollywood super-agent Shep Gordon could bust him out of Razzies jail.

Myers won a Golden Raspberry in 2009 for playing the lead in the movie-everyone-loves-to-hate, “The Love Guru.” At the ceremony that year Razzies founder John Wilson shredded a DVD copy of the movie on stage.

“There was a lot of depth to ‘Supermensch;’ therein lies the reason he is up for a Redeemer,” said Murphy. “Sometimes small [films] with just a little bit of money can have a lot more value than a big, loud movie with a lot of stuff thrown at it.”

Stewart is a former Razzies winner, too, for her work on “The Twilight Saga.” Her dramatic turn as a female guard at Guantanamo Bay in last year’s “Camp X-Ray” got her nominated for Redeemer status.

“I thought she did well,” Pacatte said of Stewart. “I said, ‘Oh, she really can act.’ Because all she did was pout in Twilight. Anybody can pout. That’s not real acting.”

Reeves also has a handful of Razzies nominations under his belt. But his work as an assassin in the 2014 thriller “John Wick” led Murphy to consider him for redemption.

Even though Pacatte applauds Reeves’ acting in the “Matrix” series, she said he’s in serious need of absolution for his work as a demon hunter in “Constantine,” which she called “painful.”

If it was up to her, she’d give the Redeemer award to Affleck. “I wouldn’t mind if Jennifer Aniston came out of the pit, either,” she said.

Murphy said one of the first questions Pacatte asked about the Saturday night ceremony was this: “Am I going to be embarrassed?’”

That’s when Murphy felt obligated to tell her about the guy who will be running around in his underpants at the show.

The ceremony, which is not televised, will take place at The Montalban performing arts theater in Hollywood. That’s right in Pacatte’s neck of the woods; she lives with other Daughters of St. Paul in nearby Culver City, California.

She didn’t know of any after-parties planned for the big night but she is getting star transportation treatment: “They did say they would send a car to take me and bring me back.”

With the Oscars on Sunday this is Hollywood’s biggest weekend of the year. But unlike celebrities who are busy getting their red-carpet wardrobes ready Pacatte already knows what she’ll be wearing for her big evening out.

[Lisa Gutierrez is a feature writer for the daily newspaper in Kansas City, Missouri, and a blogger for GSR Today with the weekly Sisters Making Mainstream Headlines feature. Born and raised in Kansas, she has been a newspaper reporter for more than 30 years. She is a voracious follower of popular culture]