• Q & A with Sr. Patricia Daly, helping corporations be socially and environmentally responsible 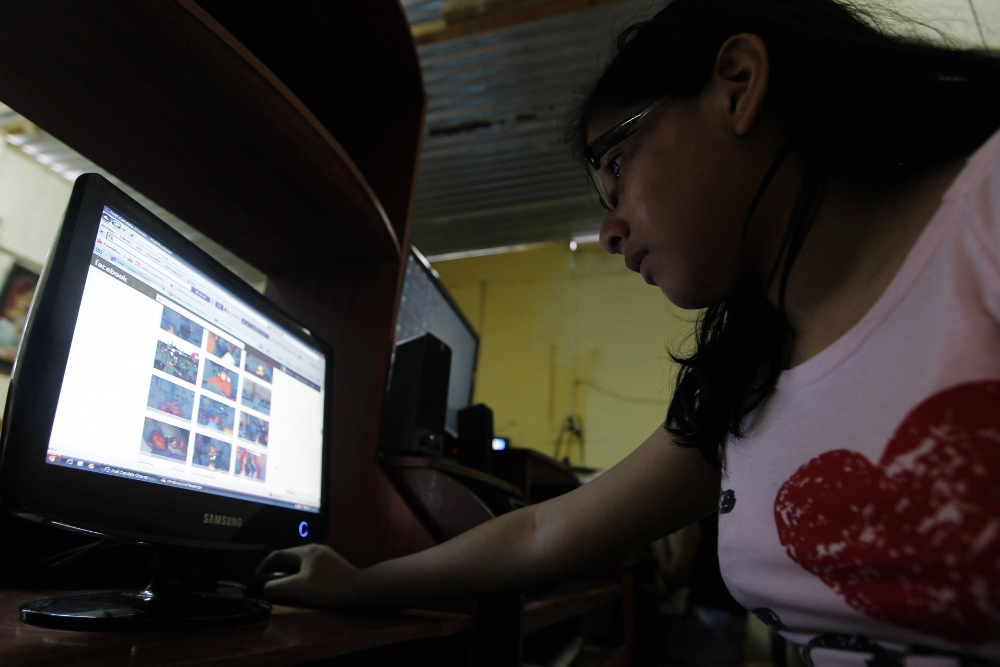 An illustration shows a teenager looking at her Facebook page. Online child sexual abuse is a booming international business and religious congregations holding stocks in major telecom firms are stepping up their advocacy to thwart it. (CNS/Mariana Bazo, Reuters)

Washington, D.C. — Online child sexual abuse is a booming international business and religious congregations holding stocks in major telecom firms are stepping up their advocacy to thwart it.

"These telecom companies are trying to attract these younger and younger audiences, but we believe they are not investing a commensurate amount of time in online safety," said Tracey Rembert, director of Catholic responsible investing at Christian Brothers Investment Services.

Verizon is among the high-profile companies being engaged. Christian Brothers Investment Services — joined by the Maryknoll Sisters, the Sisters of St. Dominic of Caldwell, New Jersey, the Benedictine Sisters of Virginia and Proxy Impact — gained a vote on a shareholder resolution addressing online risks faced by children during Verizon's annual meeting May 2 in Orlando, Florida.

The resolution — calling for a report by March 2020 on the potential sexual exploitation of children through the company's products and services — gained 33.7 percent approval from shareholders. While it was far from the majority needed for passage, such a high level of support for a first-time resolution is unusual in the corporate world.

Rembert was pleased, but not satisfied, with the result, especially given that she believes it's the first time that shareholders anywhere tried to force a telecom company into action to confront online abuse.

"I've tried to engage with (Verizon) for over a year and every time I spoke with someone I didn't have strong confidence in what they were saying, or I didn't have the right person who could give me the answer (about their practices)," she told Catholic News Service May 14.

Online child sexual abuse can take many forms including children being exposed to inappropriate content; the soliciting of kids to send inappropriate photos of themselves through social media, pornographic videos and live streaming; and the manipulation and distribution of normal family photos of children stolen from computers and cellphones.

The ease with which such images are distributed is what concerns Rembert, who has been trying to convince telecom firms to respond to investor concerns for two years. Perpetrators are using increasingly sophisticated means, including encryption, to avoid detection, she said.

Rembert undertook the campaign effort after a poll of other investors revealed that human trafficking and online child abuse were the two highest ranked concerns.

"(Society is) almost universally against child pornography and child sexual abuse," Rembert said. "There's a firm moral line that crosses all different stripes of society and because of that there is not a lot of gray area if a company is linked to child sexual abuse online."

While the moral concerns are the shareholders' greatest concern, there's also a financial reason for the effort. Rembert said that companies face high risks to their reputation and financial bottom line — and thus the value of a shareholder's portfolio — if it's determined that a telecom firm is not doing what's possible to protect children.

Online child sexual abuse is a global industry, fueled by the widening access by children to mobile devices and cellphones on every continent. No estimates are available on the size of the industry, but Interpol and other law enforcement agencies have been overwhelmed in trying to track the amount of material circulated through online platforms.

Social workers specializing in serving children suggested that as many as 1 million unique child abuse images existed, according to a 2017 report by the International Centre for Missing and Exploited Children in Alexandria, Virginia, and the Children's Charities' Coalition on Internet Safety in the United Kingdom. The United Nations Office on Drugs and Crime has said up to 50,000 new images circulate annually.

In contrast, Interpol reported about 4,000 images globally in 1995.

"They increased disclosure a bit, but we felt it was too vague and there is no way to assess how complete their response is," Rowan told CNS.

Rembert described the meeting as "good ... but we wanted a stronger commitment about what they are doing."

Other companies approached by the shareholders include Apple and Sprint. A resolution that recently had been filed with Apple was withdrawn when the company announced a commitment to address shareholder concerns.

Verizon said in a statement emailed May 15 that it "is proud of the leadership role we play in combating the proliferation of child sexual abuse material online."

The statement provided links to two sites outlining "our ongoing commitment to online child safety and the extensive resources we devote in the fight against online predators" and "educational tools and guidance to help parents and children navigate the digital world."

A company spokesman declined to respond on the record about specific concerns raised by shareholders.

"At what point does the demand for these children reach into Zimbabwe and Cambodia?" she asked.

Daly, who has spent more than 40 years in shareholder advocacy on dozens of issues from weapons manufacturing to human rights, said it's the responsibility of the telecom companies to set high standards in safeguarding children.

"This crosses classes. It's beyond any kind of racial issue. Every child is at risk, regardless of whether your parents are millionaires or not. Any child who has access to a phone will be at risk," Daly said.

Rembert pledged to keep the pressure on Verizon and other firms until they agree to undertake what she and others consider to be adequate steps to block online perpetrators from pedaling their salacious products.

Ideally, she would like to see a type of industry-wide code of conduct developed in collaboration with investors, child protection groups, law enforcement agencies and governments.

Q & A with Sr. Kathleen Bryant

An invitation to worthiness