In the three years since Pope Francis announced he would create a commission to study the history of women deacons in the Catholic Church, signaling a possible openness to ending the global institution's practice of an all-male clergy, there has been little news about the group's work.

Although two members said earlier this year that the commission has given a report to Francis, the pope himself has never spoken publicly about the matter, giving no hint of his own opinions.

Now, that looks set to change. Approximately 850 leaders of the world's congregations of Catholic women religious are preparing to come to Rome May 6-10 for their triennial weeklong meeting of the International Union of Superiors General (UISG), an umbrella organization that represents more than 450,000 sisters and nuns around the world.

It was during a question-and-answer session with this group in May 2016 that Francis first announced the creation of the commission. While the International Union of Superiors General has not said whether members will ask the pope questions again, they are set to meet with him this year on May 10.

"Obviously, that question was asked three years ago," Sr. Pat Murray, the group's executive director, said in a recent interview with GSR staff. "We don't know what the pope will say. ... We just have to wait and see."

The sisters' audience with the pope will come on the last day of their assembly, which has the theme "Sowers of Prophetic Hope." Those attending include leaders of congregations from 80 countries who speak at least 13 different languages.

Organizers and participants say the theme for the five-day gathering was chosen to help the women religious discern how they can act as healers and bridge-builders in a time of political and cultural divisions.

"I expect to be challenged. I expect to have an experience of global sister solidarity, and I expect to return to the United States asking, 'How can we be sowers of prophetic hope?' " said Sr. Carol Zinn, executive director of the Leadership Conference of Women Religious, the primary association of congregational leaders in the United States.

"How do you live out a vision of hope in our current context?" Zinn, a Sister of St. Joseph of Philadelphia, said in an interview. "The plenary is right on the mark on the kinds of talks and discussions we need today."

Beyond wider societal questions, the triennial plenary also comes as the organization has been playing a larger role in raising the profile of women inside the Vatican's all-male decision-making structure.

The group's leadership has been seeking more involvement at global meetings of bishops, known as synods, and has teamed with the global umbrella group representing religious priests and brothers to press for women to be able to vote at the gatherings like men do.

In an apparent sign of the success of their efforts, the entire 10-member executive board of the International Union of Superiors General was invited to participate at Francis' February summit of the world's bishop presidents to discuss clergy sexual abuse. Only three women religious had been invited to the 2018 synod on young people.

Sr. Carmen Sammut, president of the organization, pointed to its burgeoning influence inside the Vatican in a March letter to its members around the world.

"The representative role of the UISG has grown in importance during these past years," said Sammut, the Maltese superior general of the Missionary Sisters of Our Lady of Africa. "We are increasingly called on to participate in meetings, and we are consulted on important matters that arise."

Mercedarian Sr. Filo Hirota, who served on the union's executive board from 2013 to 2016, praised Sammut for her leadership and her willingness to challenge the Vatican to better include women, especially at synod gatherings.

Hirota, who is Japanese but lived in Rome as the head of her order from 2012 to 2018, said the union had not been included in the 2014 synod on family life. Under Sammut's leadership, the group's executive board wrote a letter to Francis giving five suggestions for how he and the Vatican could better include women.

At the following 2015 synod, the International Union of Superiors General was given three representatives, including Sammut.

"It's not only Carmen; it's the whole group who said, 'Well, we have to do something about it,' " Hirota said, describing the way the group's executive board handled the 2014 situation. "UISG represented women religious for participation in the life of the church, especially the synod."

That tactic of confronting the Vatican about roles for women in the church may come to a vote shortly after the May assembly: As happens at each three-year plenary, the group will begin the process of electing new leadership.

Sammut, who has been president since 2013, has served two terms and cannot be reelected.

The election process began before the assembly, as sisters from various continental regional groups elected representatives for a council of delegates that will meet the week following the assembly. That council will then elect a smaller seven-member board of directors and the entire union's new president.

Hirota said the union had taken a "qualitative leap forward" under Sammut and Murray. A member of the Institute of the Blessed Virgin Mary, Murray was appointed the group's executive secretary in 2014 and could stay in her post through 2023, according to the union's statutes.

"UISG has really become a community of women sharing life and mission, supporting and animating women religious around the world," Hirota said.

The assembly's focus on being "Sowers of Prophetic Hope" will center specifically on three areas in its presentations and discussions on May 7-9:

Among the scheduled presenters: Sr. Judette Gallares, a member of the Religious of the Cenacle and theologian at the Philippines' Institute for Consecrated Life in Asia; Sr. Adriana Milmanda, a Holy Spirit Missionary and director of Argentina's Proyecto Ser Mujer, a center for the empowerment of women in vulnerable situations; and Donna Orsuto, a professor of spirituality at Rome's Pontifical Gregorian University.

On interculturality, she said women religious "feel this is a prophetic moment for religious life. We're at a time when more and more, there's division, and there are divisions growing for all sorts of reasons."

On interreligious dialogue, she said, "The prophetic role of religious life is to be a bridge between peoples of different cultures, but also different faiths or people of no faith."

On care for the planet, she said discussion at the assembly will also include reflection on the International Union of Superiors General's new campaign, Sowing Hope for the Planet.

That campaign and others are working toward creating a coordinated effort by the union on environmental issues and providing resources for the study of Francis' 2015 encyclical, "Laudato Si', on Care for Our Common Home," which embraced the scientific consensus on climate change.

Murray called such projects "sign and symbol" to leaders of religious congregations worldwide "that they might respond in their own context to do something similar." As such, she said, the upcoming plenary seeks to give congregational leadership "a model at an international level so that the same leadership can be actualized at the more local level."

Zinn agreed, calling the union "the common table of religious women who are responding to needs that are both global and local at the same time."

She added that she is grateful the plenary will not only focus on the work of sisters but, more importantly, on the larger issues animating vocation in the contemporary moment.

Zinn said the focus on women deacons may miss a slightly fuller picture, and the important "and much deeper" dynamic right now within the church is in stressing ongoing conversations about mutual relations between the laity and of church clergy.

"I'd rather see women deacons [emerge as] the result of the work and growing development of mutuality of relationships," she said, pointing to the need for questions like, "What does it mean to be a baptized member of the Catholic Church?" and "How do we grow in the body of Christ?"

Recalling her past participation at the organization's gatherings, Zinn said it is "a very powerful experience to be in that room with 1,000 women religious leaders."

On the last day of the assembly, those sisters and nuns will travel to the Vatican for their audience with Francis in the city-state's Paul VI hall.

Although it's unknown what the pope will say, many expect he will touch on the role of women in the church and the open questions about the work of the commission studying the history of women deacons.

As Phyllis Zagano, a member of that commission, said during a recent event: "I don't know what will happen. But, boy, if I were the pope, I wouldn't want to walk into a room with a thousand nuns and not answer the question." 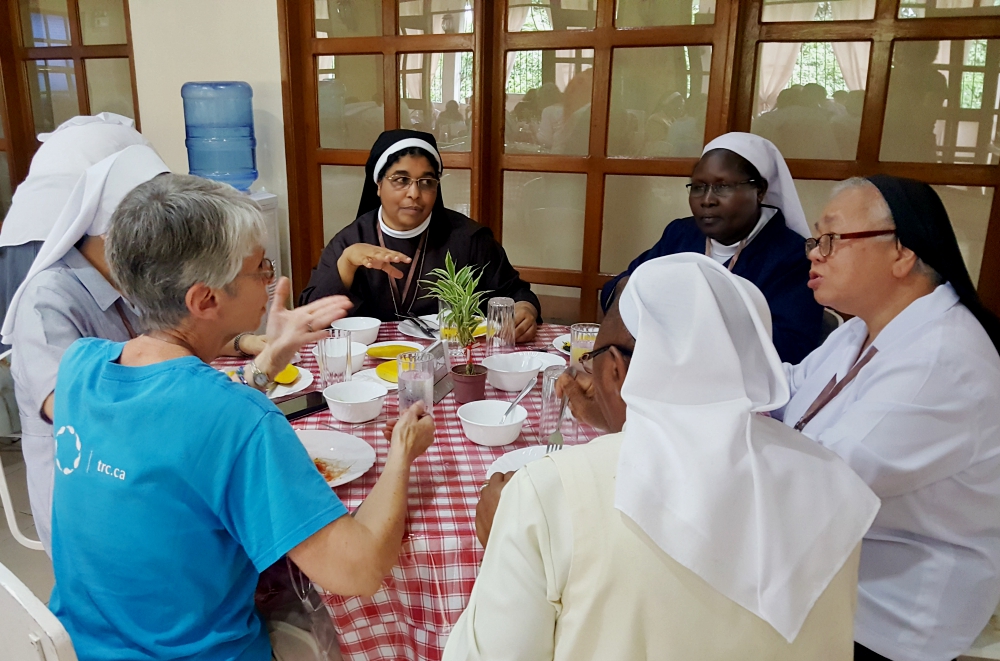 Sisters from around the world connect over a meal at the November 2017 delegates meeting of the International Union of Superiors General in Manila, the Philippines. (GSR photo / Gail DeGeorge) 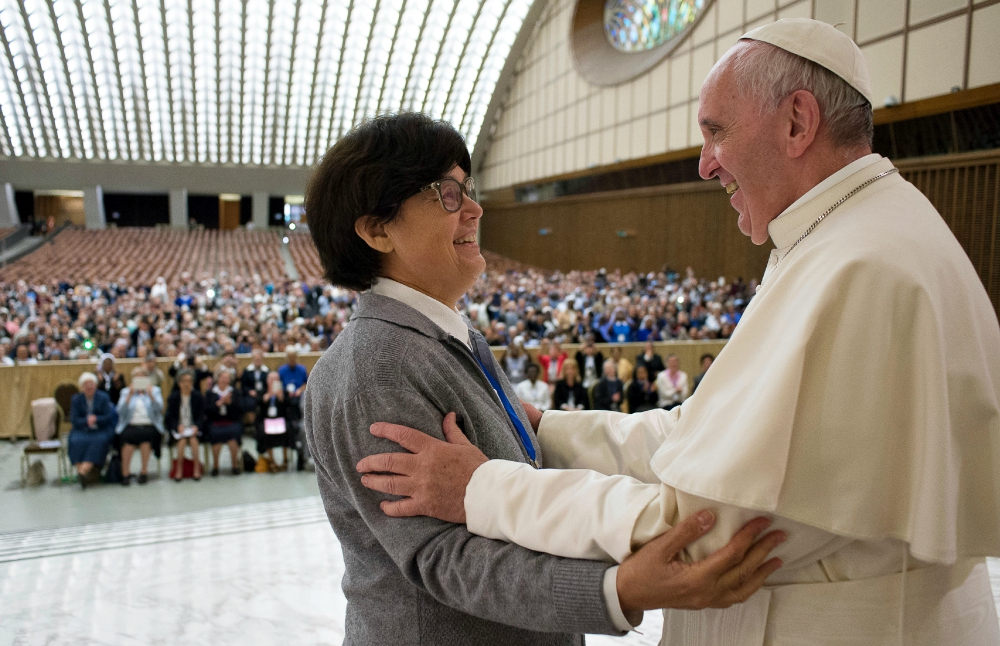 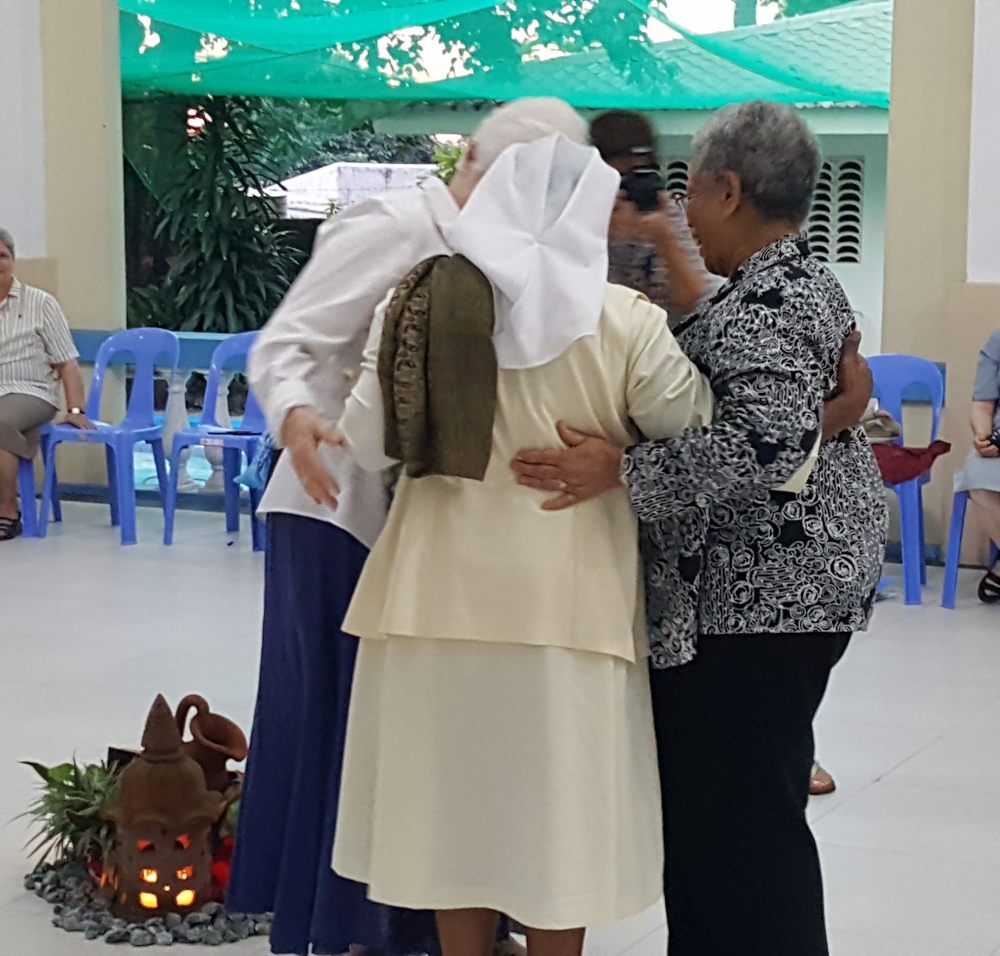