As the Leadership Conference of Women Religious wrapped up its assembly on Aug. 10, sisters explored the diversity within the image of God and lessons for religious life, marched and bore witness against systemic racism, and honored the first black recipient of LCWR's Outstanding Leadership Award.

The largest group of leaders of women religious congregations in the U.S., representing about 80 percent of 48,500 sisters in the country, continued its theme, "Being the Presence of Love: The Power of Communion," through its final keynote and reflections, focusing on the strength of relationships and religious life even as profound changes are taking place within many communities.

Benedictine Br. Simón Pedro Arnold, the final keynote speaker and a Belgian theology professor who's lived in Peru for 40 years, blended Christian theology with Andean spirituality, introducing the sister leaders to the concept of ayni, reciprocity, particularly in the Trinity.

"In the Andes, individual experience does not exist," he said. God is seen "as a kind of dynamically evolving cosmic presence," a concept that influences his approach to Trinitarian faith.

"Our mission now is to be a laboratory of the reign of God."

Arnold invited a "feminine perspective" toward the understanding of the Trinity, which emphasizes a vulnerable God, rather than a faraway God "whom we want to win over with our merits and our pleas." Trinitarian faith, he countered, proposes a vision of God "as pure reciprocal relationship" — ayni.

The unity of the triune God is in the solidarity among the persons, he said. And therein lies the lesson for humanity: to move away from self-sufficiency and toward relationships.

He challenged those in leadership who may focus on the increasing fragility of institutions, persons and communities as a "dying," asking, "Would this be a Gospel attitude?"

Arnold pointed to his own community, which "consciously opted for vulnerability," at one point having only two monks. They trusted and stayed in the institution that they thought was collapsing, he said, and "out of this limited fragility emerged the most prophetic experience of Providence." A young married couple recently joined, and eventually more young women, "requiring our unprecedented creativity in forming a mixed, contemplative Benedictine community."

"Today, we continue to be more vulnerable than ever while also sensing a surprising vitality, in that 'different' way of the triune God, so beyond our mental categories," he said. "The ministry of leadership is to believe, trust and permit the providential and surprising fruitfulness of fragility; not to resist it," he said.

Reflecting on Arnold's challenge to see fragility in a new light, one sister shared her congregation's experience of coming to completion, with 24 sisters remaining in her international congregation, a third of whom are in their 90s.

"We're only now realizing what completion means for us," she said, participating in one of the rotating panels that reflected on the keynote addresses. "I was thinking about how hard it is to be in that vulnerable space, and the suffering I see in my sisters is their resistance to that vulnerability,"

"As a leader, I ask, how do I get in touch with my vulnerability in this?" she said. "I've always been struck by the thought that pouring out cannot be done partially ... I feel the invitation for me right now is to learn how to pour out, to not hold back, and to trust."

Within Andean spirituality, Arnold said, vows are a commitment to harmony in the entire universe: "Our religious life is incarnated in this mutuality at the heart of the world, caring for and restoring universal harmony through the symphony of our differences."

Another sister on the panel said she was touched to hear from Arnold that "we find God in the differences, in the space between us that's different."

"What an unusual world it would be if we really believed God was in those differences," she said. "As leaders we're in a difficult position, because we can't just throw up our hands and say, 'Let Providence take care of everything.' ... We've some hard choices to make, but in combination with this belief in the value of vulnerability and of our differences."

In anticipation of the justice action, she challenged her fellow leaders: "Is that about the other, or about us? ... Are we concerned now with our vulnerability and our fragility that we do what we believe is the right thing to do?"

Following Arnold's keynote and the panel, the group recommitted to its 2016 resolution that recognized "racism as a systemic, structural cause underlying and contributing to the multiple situations of injustice identified in the LCWR Call."

After affirming their recommitment to the resolution, sister leaders then publicly witnessed against the evils of systemic racism, as well as their historical complicity, by marching to the Old Courthouse in St. Louis, infamous for the Dred and Harriet Scott case. Opposition to the 1857 Supreme Court decision, which denied African-Americans the right to sue for freedom, was a catalyst for the Civil War, and eventually led to the adoption of the 13th, 14th and 15th amendments to the Constitution.

After the drum-led procession, sisters stood on the courthouse steps in silence, holding signs that read, "Being in Communion, Standing against Racism." The same lyrics that echoed throughout the assembly eventually broke the quiet: "We stand in communion, we stand in grace. We stand in communion with the human race."

After the witnessing event, several sisters reflected on stage about what the experience meant to them and members at their tables at the assembly. "One of the things that I have struggled with is our congregation's approach to anti-racism," said a sister on the panel. As a leader, she had figured that she'd endorse steps her community took toward fighting racism but wasn't going to lead the effort, she confessed to how she felt prior to this experience.

"I was very touched by our action this afternoon when we chanted that we were in communion with God's human race," she said. "My resistance has really lessened in that I see myself wanting to make racism history, and I never quite felt like that before."

Sister of Charity of the Incarnate Word Teresa Maya, in her final moments before transitioning from president of LCWR to past-president, thanked Arnold in Spanish for his keynote, and for confirming that this "fragile moment" holds a "profound call for all of us."

"We needed to get a little older and a little fewer to be ready for this call for diversity," she said.

"This call to me, the laboratory of the reign of God — in no small ways, I pray that our action this morning is just the beginning of little experiments in this laboratory," Maya said. "May we learn as leaders to harmonize the symphony of our difference, to truly reveal the loving God we believe in."

Concluding the assembly, LCWR presented Daughter of the Heart of Mary Sr. Anita Baird with the Outstanding Leadership Award, the first black sister to receive the recognition. Baird was the first African-American to serve as chief of staff to the archbishop of Chicago. In 2000, Cardinal Francis George appointed her the founding director of the Chicago Archdiocese's Office for Racial Justice, which directed the archdiocese's initiatives to eradicate racism in its structures and institutions.

Previously her community's regional superior, provincial councilor and, most recently, its U.S. provincial, Baird served as president of the National Black Sisters' Conference, which recently celebrated its 50th anniversary. She also belongs to Catholic Women Preach.

In her address, Baird said her reaction was inspired by the Holy Spirit, which told her she was chosen to receive this honor "on behalf of all the black women religious on whose shoulders you stand. Therefore, it is in their names that I humbly accept."

Through this leadership award, LCWR is honoring "not only me but every African-American woman religious, as you bear witness to the fact that black religious life matters!" she said to a standing ovation.

She said that the church and religious institutes "must give more than lip service to this horrible disease" of racism. "We must become surgeons of righteousness using the surgical instruments of our faith with great precision to cut out this cancer that lives in the body of Christ."

Baird challenged the sister leaders in the room to "find the courage to change the things that need to be changed. Seek the forgiveness of people of color that you have failed to see as your sisters and brothers, as yourselves. I encourage you to actively invite women of color to journey with you as you seek to broaden your tents and bear witness to 'the power of communion,' " she said, echoing the theme of the assembly.

The first black recipient of the LCWR Outstanding Leadership Award: Sr. Anita Baird, Daughter of the Heart of Mary, preacher and educator on racism in the Archdiocese of Chicago.

She also galvanized for continued outrage every time a young black life is taken prematurely — an outrage equal to the church's toward abortion — and for the embrace of brown faces that come to the U.S. in search of a better life. "Let our religious communities become sanctuaries of hope for the 'holy families' of our day."

"We cannot relent our vigilant watch until every family separated at the border has been reunited," she said. "This is how we bear witness to the presence of love and power of communion in our time."

In closing her address and the assembly, Baird's soulful voice filled the room as she sang the Magnificat, Mary's hymn of praise.

"As we accept the clarion call to stand in solidarity as one family, we are keenly aware that no one stands alone," she said. "We all belong to life's intricate circle of belonging." 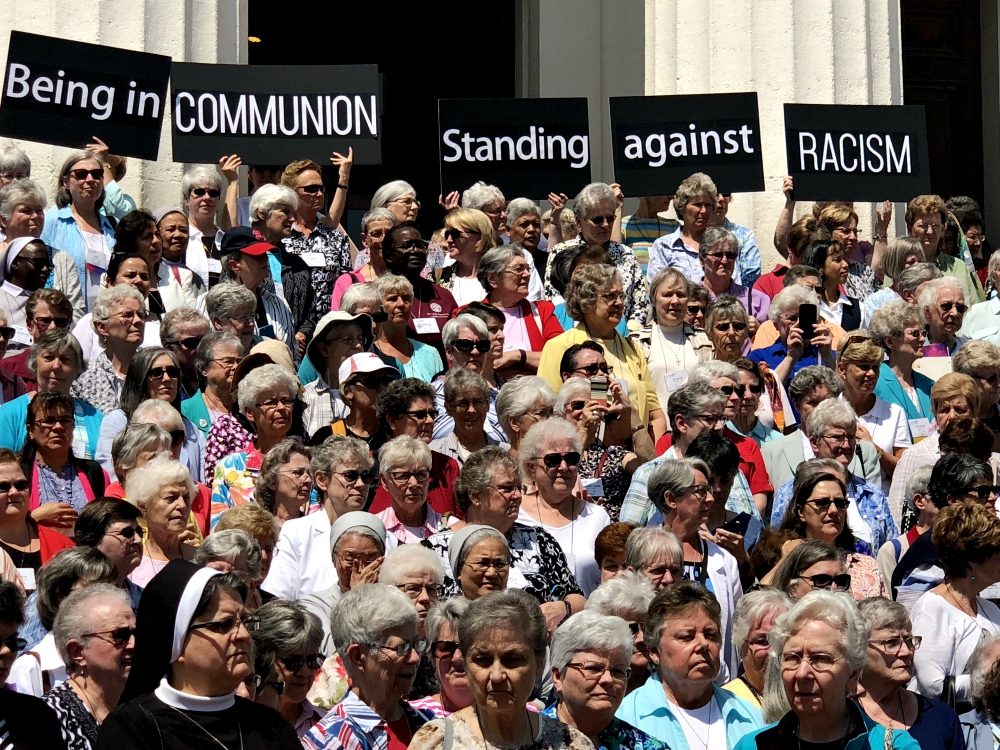 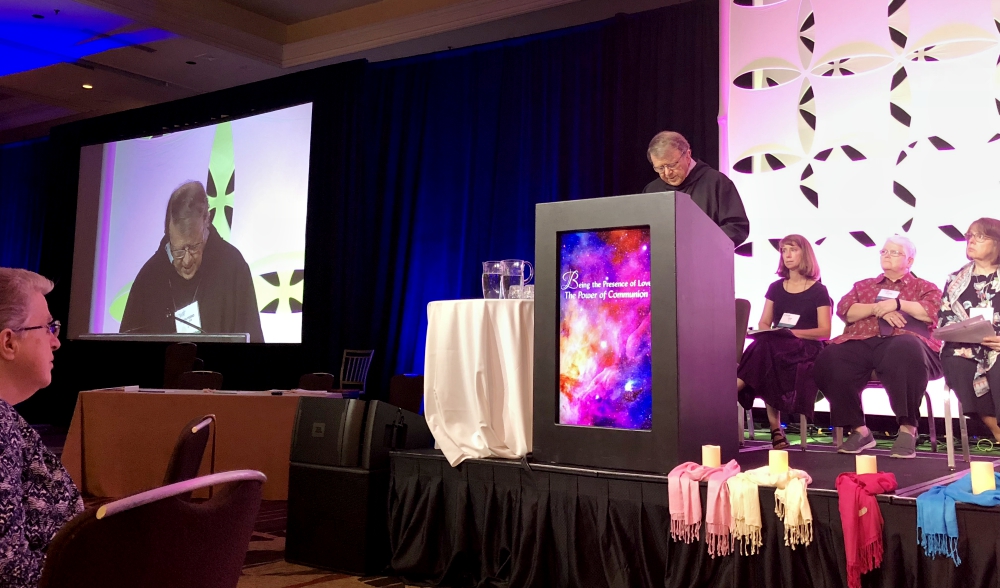 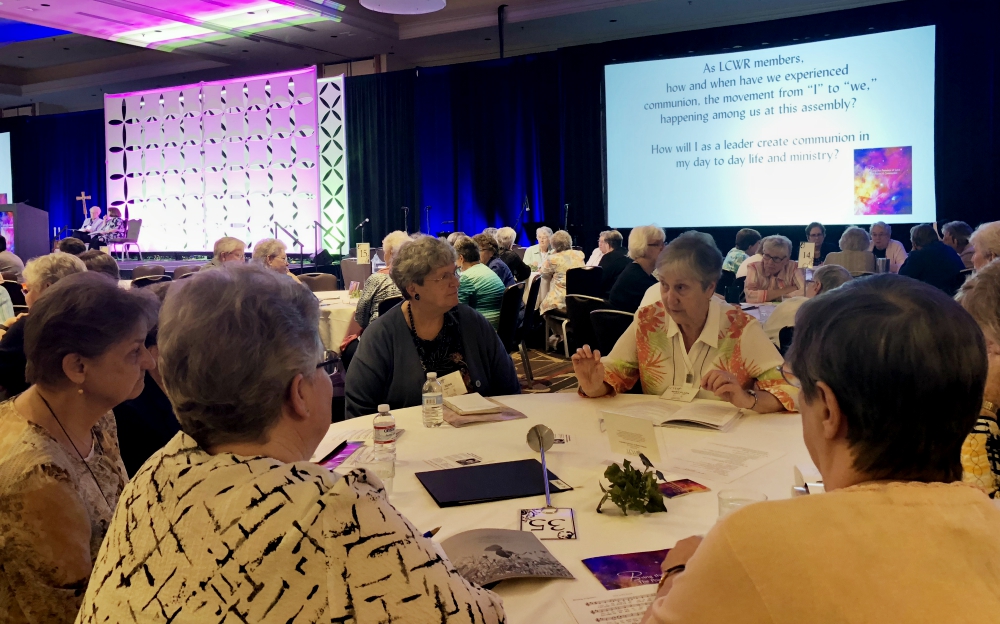 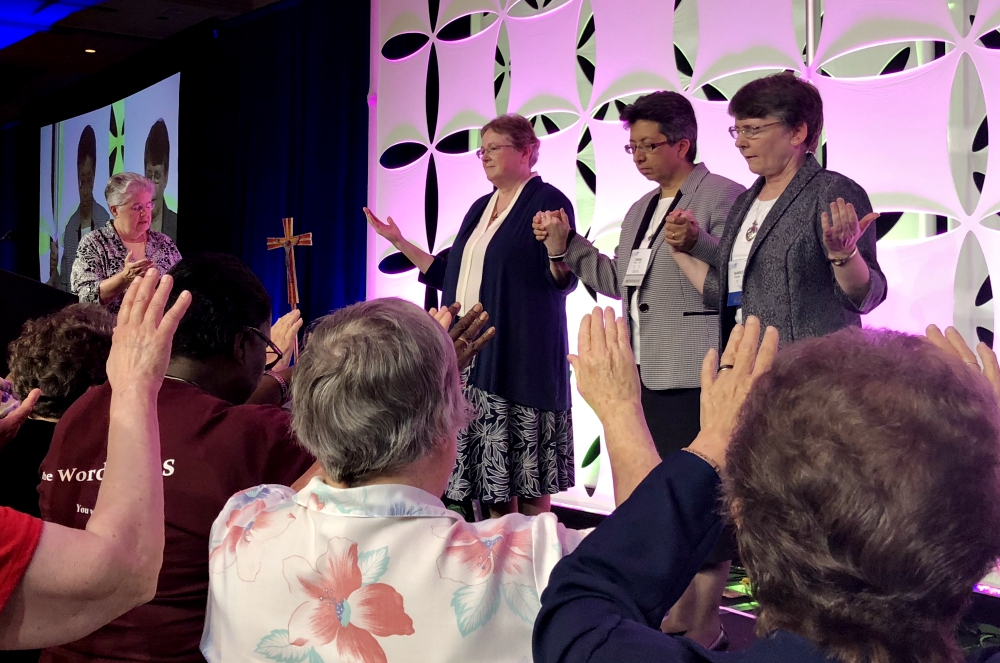 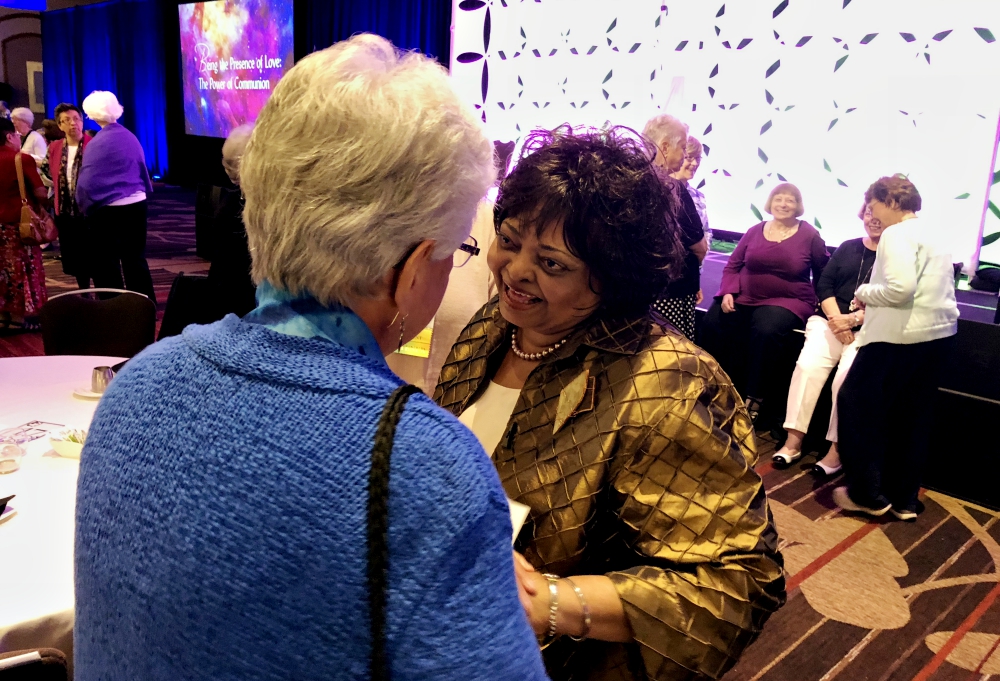