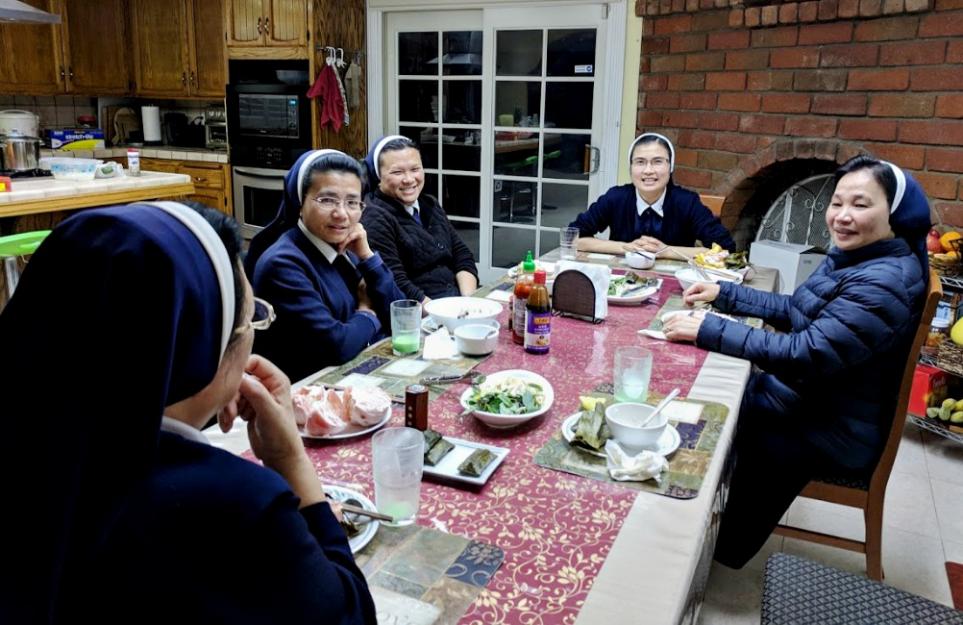 The Lovers of the Holy Cross of Los Angeles community at Our Lady of Mercy convent in Anaheim, California (Peter Tran)

Much has been written, and for many years, about immigration and its various policy and practical aspects.

But what about that "weekend associate" at your parish? Or that group of nuns who reopened the old convent? They, too, may be immigrants.

There are close to 5,000 people from all denominations hailing from other countries who come to the United States each year as "religious workers." Among Catholics, they are usually clergy, sisters and brothers, but there are lay missioners, some of them married and with families. U.S. immigration law makes provisions for them to carry out their ministry through the R-1 visa.

The Catholic Legal Immigration Network (CLINC) has a hand in about 800 cases each year, according to Miguel Naranjo, director of CLINIC's Religious Immigration Services. It was one of CLINIC's first programs, established more than 30 years ago, and the numbers suggest it remains a valued initiative. "We certainly have a very busy practice," Naranjo told Catholic News Service.

CLINIC works with nearly half of U.S. dioceses in doing the visa work for religious workers. The remainder, according to Naranjo, either are connected with attorneys who can guide the process for immigrant clergy and religious, or work through a local Catholic Charities affiliate or similar agency on sponsorship issues. "We work more with religious orders. There is a large number of religious orders in the United States," he said.

Naranjo, who has been with CLINIC for 13 years and has led its Religious Immigration Services division for about half that time, walked through the process.

"This is a program that did undergo some changes a decade ago. They changed it to make it similar to other visas. What they require — which they did not require 10 years ago — was to file a petition. They have to file a petition with the Immigration Service: The organization's legit; it has the financial means to sponsor the person they want to sponsor," he said.

For someone who qualifies as a religious worker, he says they "could fall under a traditional religious occupation, somehow involved in promoting the belief system of the denomination. You need a lot of documentation. The standard the immigration service will use is that the documentation must be verifiable. We can submit affidavits. You're looking at 3-6 months to prepare the petition," Naranjo noted.

"There is a site visit the immigration service will conduct. And there's a fraud investigator that makes sure everything you said you were going to do in the petition was true. It's certainly not a simple process," he added.

Organizations calling CLINIC on religious immigration issues "express some frustration how the process can take a lot of time. Inevitably, there comes a time when you have to troubleshoot issues. Immigration service will request further evidence — evidence on why this person is qualified, or do you have the means to support.

"Like people who use an accountant to prepare their taxes," Naranjo said, "with immigration you can do it yourself, or you can use a service like ours."

One priest who used CLINIC is Fr. Marinaldo Batista, a Brazilian priest with dual Italian citizenship who ministered in Victoria, British Columbia, for 13 years before arriving last year in Bristol, Rhode Island. He needed some CLINIC troubleshooting.

"My coming was a little bit complicated last year," Batista told CNS. "I faced some trouble because I came and there was a lawyer who was supposed to take care of my immigration process. So then things went not good with him. I was here already, working," he said, laughing afterward. "But everything was by mistake. ... I was relying on the Diocese of Providence, because they are the ones who called me here."

Batista said, "Things were stuck. I spoke to the diocese: 'We have to solve it, otherwise I'm going back, because I'm not going to be here this way.' "

A priest he knew in New Hampshire gave him Naranjo's name. "I knew he was working with Catholic immigration, but I was not sure if he was working with CLINIC. So then I spoke to the bishop, [Providence Auxiliary] Bishop [Robert] Evans, and he told me to have a conversation with CLINIC. That is when things started with him and the diocese. They started the process, the petition, everything. So then, I think, it took like, two months if I'm not mistaken. Two months. It was faster than I thought."

Since he had business in Italy, he flew to Rome and made an appointment for an immigration interview. He left Dec. 5 and was able to return to the United States, visa in hand, before Christmas. "So, no, I didn't have any complications in this regard," Batista said.

"I am here because I know that there is a need in this parish. There is a need for these people. And these people are God's people. They need my ministry. That's why I'm here," Batista said he told the diocesan chancellor. "Otherwise, I don't need this travel. I can go back to where I was. To have this move in our lives is not easy."

The experience of immigrant sisters

Venturing to new territory is the subject of a new book, Migration for Mission, published in April and co-written by Sr. Mary Johnson, a Sister of Notre Dame de Namur who teaches at Trinity Washington University; Sr. Patricia Wittberg, a Sister of Charity; Sr. Thu T. Do, a Lover of the Holy Cross-Hanoi; and Mary Gauthier. They are staffers at the Center for Applied Research in the Apostolate (CARA) in Washington.

The book included results from a survey of nearly 1,000 immigrant sisters. The average age of the sisters is 58, making them much younger than U.S.-born sisters, whose average age is in the high 70s. 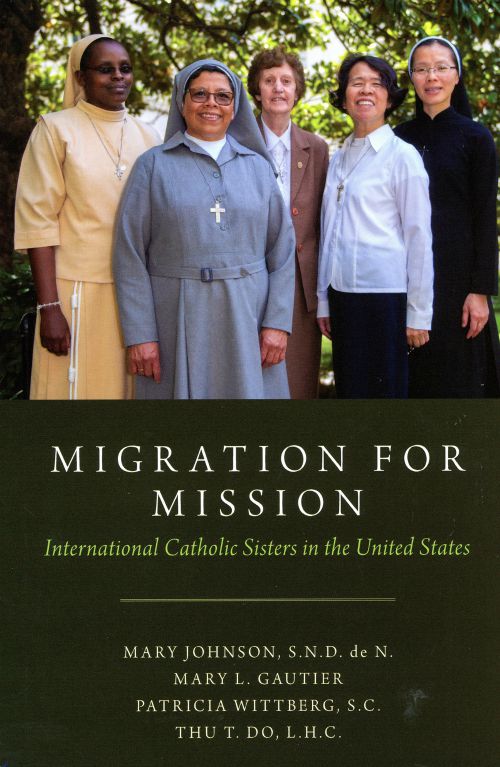 Cover of "Migration for Mission: International Catholic Sisters in the United States," published by the Center for Applied Research in the Apostolate (CNS photo)

"Most of the sisters are satisfied with the practical aspects of their living situation in the United States: their housing, food, health care, transportation and financial support. But there are age and ethnic differences," the book said, and the sisters' lives weren't entirely free of trials and tribulations.

"The percentage of sisters who say they are very satisfied with these aspects is higher among the Europeans, Australians and Canadians than it is among the respondents form other parts of the world, and among older respondents than among younger respondents. These patterns may be related, since many of the sisters from Europe tend to be older and to have lived in their own, U.S.-based institutes for many years," the book said. "The sisters' satisfaction depends, to some extent, on their living arrangements," with more dissatisfaction reported if they are not living with other members of their own order.

When asked, "In your experience, what is most needed to improve the life and ministry of international women religious?" practical aspects received scant attention: Financial difficulties were mentioned by 5.3 percent, health insurance by 2.5 percent, housing by 2.2 percent, food by 1.5 percent, and there were just six mentions of transportation. Nuns from Europe, Canada and Australia more likely to mention health care," the book said, "which might be expected, given their older median age."

Some sisters' comments were printed in the book, although identifying information was not included.

"In my own country, we don't pay the rent, we don't talk about the rent. So we don't know how to pay rent. If we tell [our superiors in our home country], they don't believe it, that you have to pay rent here yourself," one sister said.

Another said, "Some of [our sisters], when they came here, they saw how we live in simple houses. And they said, 'Oh, I expected more luxury,' and everything. ... So, actually, we live in old convents. We don't have luxury."

"It is often hard to attend daily or Sunday Mass due to lack of transportation. There is no public transport in some places, and this makes it hard for international women religious to carry out their mission or studies effectively," a third sister said. "Depending on rides sometimes does not work."

The sisters' experience with the U.S. health care system was eye-opening.

"Doctors!" exclaimed one nun. "It was difficult because I was sick, but when I tried to make a doctor's appointment, they wanted $304 up front before they would even see me."

"I feel so afraid to go and see a doctor," another sister said. "I was informed if I want to have a CT or MRI, 'You should go and take a flight to [country] because seeing a doctor will be cheaper than if you do it here.' "

"Currently, my religious community provides health care for me, but it is very expensive. I would wish for some kind of program for international religious in the United States, when health care could be made more affordable."

In other survey questions, routinely three out of four sisters reported being "very satisfied" with the social aspects of their life in the United States.

"When I came to the airport, I didn't know anybody. ... They had told me, 'You have to meet other sisters over there. They will be waiting for you.' So when I came, I saw somebody holding a sign saying, 'Welcome Sister X.' So I just went to them and they were so thoughtful," one sister reported. "They said, 'We know that you are so lonely and we are here for you. Just make yourself at home. And if you need anything, please let us know.' So I felt like I was at home."

When asked what could be improved about the sisters' lives, one sister replied: "It would be helpful if the members of the dominant culture would treat the members of the minority culture with mutuality and encourage the minority culture to preserve the richness of one's native tongue and culture. Forced enculturation for the sake of uniformity is a very violent experience of 'colonization.' "

Another sister answered, "I cannot recall being fully welcomed and supported by the diocese. There are situations of feeling isolated because of my accent. I offered help in situations I knew I can help, but there was not a response from the diocesan staff."

Religious Life | Almost 5,000 immigrants to the US every year are clergy or religious

Amid change and uncertainty, Basilian Sisters in Ukraine embrace risk and love

The call to transformation in religious life today

For different times and different cultures, sisters adapt the mission