Catholic faith in China is traditional and deep

Back to the main story: 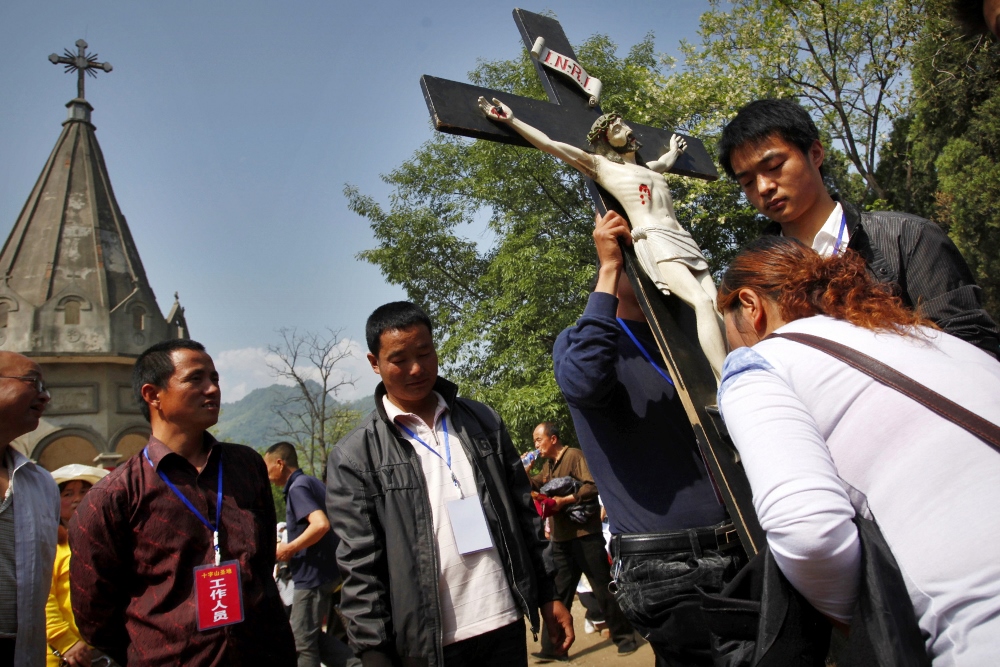 A Chinese Catholic kisses a crucifix during a pilgrimage in Baoji, China, in this May 3, 2013, file photo. (CNS photo / Wu Hong, EPA)

As Maryknoll China Programs Liaison, Sr. Janet Carroll, a native New Yorker, has worked with sisters in China since the 1980s and is a passionate advocate for better understanding among Americans about China and the Catholic church there.

Carroll helped with the recent visit of six sisters from China — representing five different congregations — and who completed a Geriatric Spiritual Care certificate program through the Avila Institute of Gerontology, the educational arm of the Carmelite Sisters of the Aged and Infirm.

The sisters were in the United States under the auspices of the Maryknoll China Education Project, which is funded by the Maryknoll Society of Fathers and Brothers. Since 1991, the program has sponsored well over 100 Chinese priests and women religious to come to the United States to study at the graduate level at U.S. Catholic institutions.

As background for the visit, Carroll recently made the following points to GSR:

From my many years of involvement with religious sisters in China since the 1980s, I would suggest that their vocational call is grounded in their birth and upbringing in devout and very traditional Catholic families. Almost without exception, these woman, as well as most of the younger male clergy, come from large Catholic families and from predominantly rural homes, where multiple generations and siblings have lived together.

I've always made it a practice to ask the young women I've met in our project — and indeed all over China when visiting there since 1985 — how they came to become sisters. (I have asked the same of priests.) In almost all cases they respond that it was "natural" for them — their families were Catholic for generations, and there were always priests and sisters in their families. Especially after the "Reform and Openness Period" — beginning in 1979 under Deng Xiao Ping — some say they felt it "their obligation," even privilege, to once again carry on this tradition now that they were free to do so.

The faith is deep in these families. Despite these young people having been educated in ideologically controlled schools and society, efforts to exert control over their minds and hearts never took. This remains true today for the vast majority of Chinese people; they know how to "go along to get along" but they remain grounded in the beliefs, values and inheritance of their ancient culture and civilization — and including, in this case, religious faith.

The yin and yang principle is always in play: "On the one hand, on the other hand." In today's China, "ambiguity" is the name of the game. This is a nuance that is often lost by the American media. Classical Communism is a dead letter in China. Of course there are dyed-in-the-wool Marxist/atheists there, as there are in every country. Reflecting the broader global reality, power and money are dominant drivers in Chinese society today, far more than communist ideology.

All religious traditions are flourishing today in China, including both Roman Catholic and Protestant churches. The people practice a very traditional Catholic faith, much more so than in the United States. There are few, if any, theological or doctrinal disputes — which are so common in the Western churches. Chinese Catholics across the board are 'loyal' to the Holy Father. His photo is found in every Catholic home — and he is prayed for at every public liturgy.

This is far and away more significant than whether local church edifices, organizations and leadership are registered or unregistered with the government. I would say it is precisely because of the pressures, harassment and obstacles Christians have endured through the last 50 years that the faith of the Chinese Christians is so vibrant and so strong.

Back to the main story:  US training program helps sisters in China improve care for elderly

Religious Life | Catholic faith in China is traditional and deep

Forging foundations without forgetting our founders

The future of mission: Become 'less and less Western'