In the second public address of the first full day of the Leadership Conference of Women Religious' 2015 assembly, St. Joseph Sr. Janet Mock spoke about the changing reality of religious life, likening it to the resurrected body of Christ.

"If your congregation has done all it can do, you must place the collective wisdom that is yours at the service of the world through prayer and suffering, entering into the passivity of Christ for the good of the world," she said, adding that life always comes out of death.

The point of Mock's address wasn't diminishment, per se, but rather how religious communities can prepare for a future that will be very different from the past. She emphasized the need for intercongregational ministries, saying there could be no "superstars" in religious life, and discussed the need for current leadership to ensure that younger sisters are prepared intellectually, spiritually and psychologically for the world.

"What if we addressed these needs across congregations together?" Mock asked the audience. "Because, after all, these women are ours."

Mock, who will address the assembly again Friday evening after receiving this year's LCWR Leadership Award, served as executive director from April 2012 to December 2014, when she completed her term and was succeeded by Holy Cross Sr. Joan Marie Steadman. Mock's term as executive director spanned almost the entire length of the Vatican's mandate to the conference, and she was among the leaders who went to Rome earlier this year at the end of the mandate.

Mock touched only briefly on the Vatican mandate, saying there were times during the dialogue process with the Vatican that LCWR officials were "rendered silent" and "feared for our lives as a congregation."

But ultimately, she said, what she took away from the process was a desire to enter "wholeheartedly" into the activity of God when called to, but to know when it is beyond her capacity to act — the very same concept she encouraged the sisters to consider as they looked at the reality of these communities.

The message seemed to resonate with the members, some of whom were randomly selected to share the reflections they had with their tables following the address.

Many of the sisters said their table discussion was about the formation of young sisters. Sr. Jean Olmstead, a Sister of the Blessed Sacraments, said her table explored the idea of having intercongregational small groups of women in initial formation that could engage, grow and even fail together.

"This about securing the future of religious life, which is something that we all want," she said, echoing Mock's point that this responsibility is larger than any single community.

Other tables focused on the idea of knowing when to be passive. Sister of St. Agnes Jean Steffes, who attended the Catholic Health Association assembly in June, said in her remarks that Catholic hospitals will soon have to address the treatment of transgender patients and that sisters associated with those hospitals will have to determine whether they will counter institutional discrimination passively or actively.

And that circled back to the concluding image Mock used in her address — that of women religious as the small but integral voice of the flute in an orchestra.

"Let us never stop playing our part," she said. "May we religious be what Caryll Houselander called Mary so long ago — a steady, faithful reed of God."

[Dawn Cherie Araujo is staff writer for Global Sisters Report, based in Kansas City, Missouri. Follow her on Twitter @dawn_cherie]

Read about the other keynote address by Fr. Steven Bevans LCWR speaker: Quench the thirsts of the world by focusing on the Holy Spirit 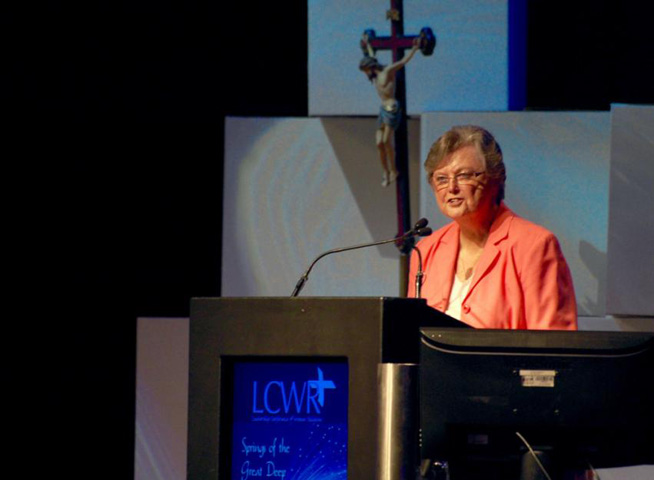