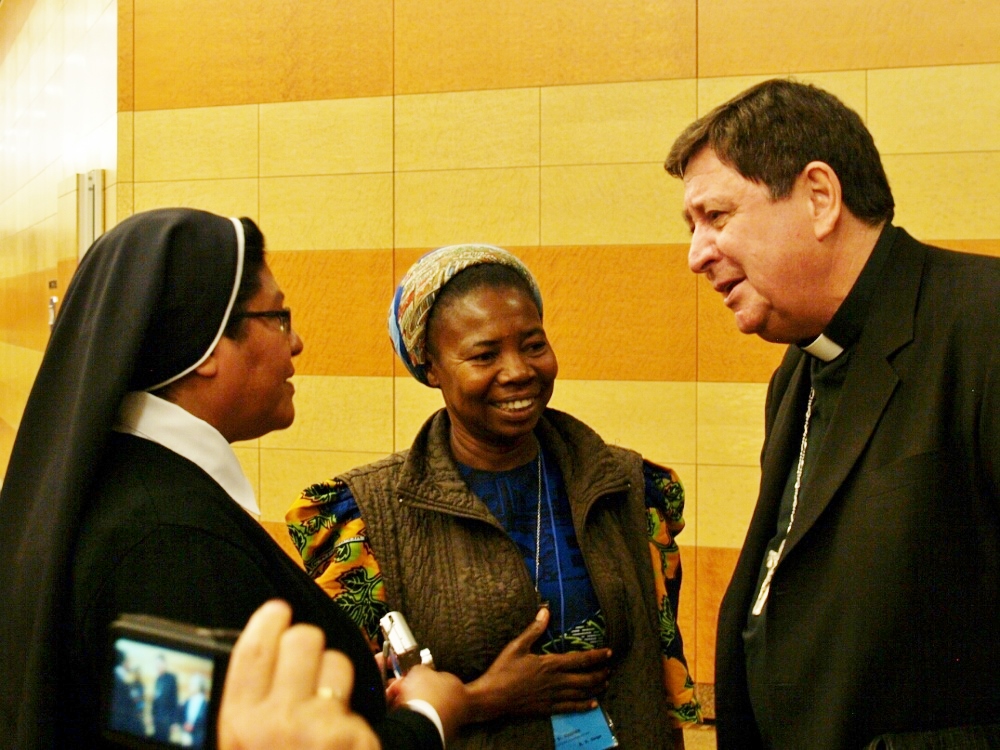 Cardinal João Braz de Aviz, prefect of the Vatican’s Congregation for Religious, speaks with members of the International Union of Superiors General following a talk with the group in Rome May 5, 2013. (NCR photo/ Robyn J. Haas)

Tuesday’s release of the final report on the apostolic visitation of U.S. sisters brings to a close a six-year process that initially shocked and angered many, but also unified women religious in the United States like never before.

It is one of two separate investigations involving U.S. women religious. The apostolic visitation was made public in January 2009; in February, the Vatican's Congregation for the Doctrine of the Faith informed the Leadership Conference of Women Religious that it had begun a doctrinal assessment of the group. The doctrinal assessment is separate and independent of the apostolic visitation, and only applies to the LCWR, which is made up of the leadership of most of the congregations of women religious in the United States.

Many point to a September 2008 symposium at Stonehill College in Easton, Mass., attended by Cardinal Franc Rodé, then the head of the Congregation for Institutes of Consecrated Life and Societies of Apostolic Life, as the event that prompted the apostolic visitation.

Rodé first said the apostolic visitation “hopes to encourage vocations and assure a better future for women religious,” but later told National Catholic Reporter his office was already considering an apostolic visitation when he traveled to Stonehill, and once there, the problems and challenges U.S. religious face were made clear. The investigation, he said, was in response to “concerns expressed by American Catholics – religious, laity, clergy and hierarchy – about the welfare of religious women and consecrated life in general.”

The inquiry was officially launched in December 2008, and the heads of religious congregations were notified by letter shortly after.

“Years later, the feelings are as vivid and raw as when they first occurred,” said Mary Ann Zollmann, one of the authors and editors of the book, Power of Sisterhood: Women Religious Tell the Story of the Apostolic Visitation. Zollman is a Sister of the Charity of the Blessed Virgin Mary. “I still remember – I’m sure everyone does – opening that letter from the Vatican on Jan. 30, 2009.”

Mother Mary Clare Millea, superior general of the Apostles of the Sacred Heart of Jesus, was appointed an official “apostolic visitator” charged with visiting and surveying the roughly 400 congregations of women religious in the United States, a process that began with meetings between Millea and the heads of about a quarter of the orders.

From there, the inquiry moved into questionnaires being sent to each order asking about governance, vocations, spiritual life, formation policies and finances – though some of the questions were later dropped after many complained. The questionnaires had asked for a list of each sister, her year of birth, address and type of ministry; a list of properties owned by the congregation and a copy of the most recent independent audit or internal financial statement.

Some congregations refused to fill out the questionnaire or simply sent back copies of their orders’ constitutions.

Blessed Virgin Mary Sr. Kathleen Conway, who was on the leadership council of her congregation during the visitation, said her group initially started answering the questions, but soon realized all of them were already answered in the congregation’s governing documents.

“We decided the best bet was just to hand in our constitution,” Conway said. “We’ve already said everything in it, and it’s already been approved.”

Soon Millea was writing to congregations again, asking them to reconsider their decision not to respond to the questionnaire, noting her report “can only take into account the data I have received.”

After the questionnaires, teams of visitors traveled to about 90 of the congregations, meeting in person with leadership and individual members throughout most of 2010.

“They made us feel very comfortable,” Conway recalled. “It was a very free-flowing conversation.”

Not only were sisters comforted by the meetings themselves, but also by the widespread support they were receiving, as laity around the nation both thanked them for their service to the church and defended their integrity.

St. Joseph Sr. Jean Wincek, also one of the authors of Power of Sisterhood, said her congregation invited ministers, the archbishop emeritus and several laity to be part of the in-person visit as a focus group.

“Everyone said yes with great joy,” Wincek said. “It was a real moment of affirmation. People recognized the good women religious have done, and noted the Catholic church has been built up around this country with Catholic sisters taking a tremendous lead – in health care, in education and on the margins, whatever the need was.”

The support was so great, Wincek said, that people gathered in the congregation’s chapel and made sure there was constant prayer during the entire visit in 2010.

Rodé left the congregation in 2011, and was replaced by Brazilian Cardinal João Bráz de Aviz, who said he was seeking a “new attitude” of cooperation between women religious and bishops.

In January 2012, Millea announced she had completed the summary of her findings to the Vatican as well as most of the individual reports on each of the 400 institutes, and hoped to complete the remaining individual reports by spring.

“. . . As I learned of and observed firsthand the perseverance of the religious in the United States in their vocations, in their ministries and in their faith – and witnessed the fruits of their service – I have been both inspired and humbled,” Millea wrote in the announcement. “Although there are concerns in religious life that warrant support and attention, the enduring reality is one of fidelity, joy, and hope.”

There has been little public news of the investigation until the announcement that the congregation’s report would be released Dec. 16.

A reflection on religious vocation: The wine is ready, but the wineskin is not

An open letter to the Great Generation