by Soli Salgado
Religious Life
This article appears in the LCWR 2017 and LCWR feature series. 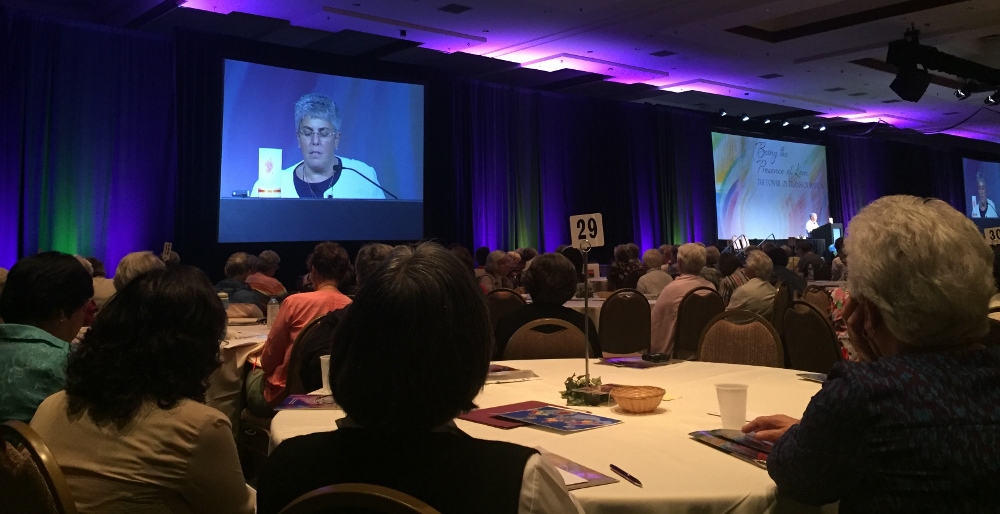 Orlando, Florida — It's high time for women religious to take ownership of the narrative that has dominated their vocation for the past half-century, said St. Joseph Sr. Mary Pellegrino.

As president of the Leadership Conference for Women Religious, she made an emphatic call to approximately 650 women religious* Aug. 10 to begin shifting the focus from diminishment to communion. The address, which was both challenging and comforting, was part of LCWR's annual assembly, held Aug. 8-11 in Orlando.

By highlighting the power of storytelling, Pellegrino noted the need to make room for emerging, more accurate information and experiences that are disrupting the age-old stories surrounding religious life.

"This is hard work, long work, and undefined work," she said, but, "I can think of no other time in my life when the need to be honest toward reality has been so urgent."

Before tackling the diminishment narrative that seems to stalk religious life, before making way for a newer narrative on communion, Pellegrino took a simplified yet careful look at the path that led them there. How did diminishment become the foregone conclusion?

The "golden age" of religious life happened around World War II, she said, and soon after the Second Vatican Council and its call for renewal of religious life in the 1960s, it was all downhill, according to the prevailing account. Sisters left schools to take secular jobs, swapped habits for street clothes and became feminists.

"Now they're all old, signaling failure. And religious life is dying. The corrective in this narrative is a return to the past," Pellegrino said.

By equating orthodoxy with numbers, this narrative diminishes every vocation, all of the church, and God.

"It's rooted in a corporate God who ascribes to human notions of progress and growth, rather than rhythmic patterns of fruitfulness," Pellegrino said.

"It reflects our fears and our uneasy and unresolved relationship with death."

The new narrative that Pellegrino is championing — that of a deepening communion — could be both refreshing and liberating, disturbing and challenging, she said.

And transitional groundwork has already begun, Pellegrino said. The apostolic visitation and LCWR doctrinal assessment laid the first bricks, "creating a wider space through which the simplistic diminishment narrative can pass, and a more complex communion narrative can emerge." 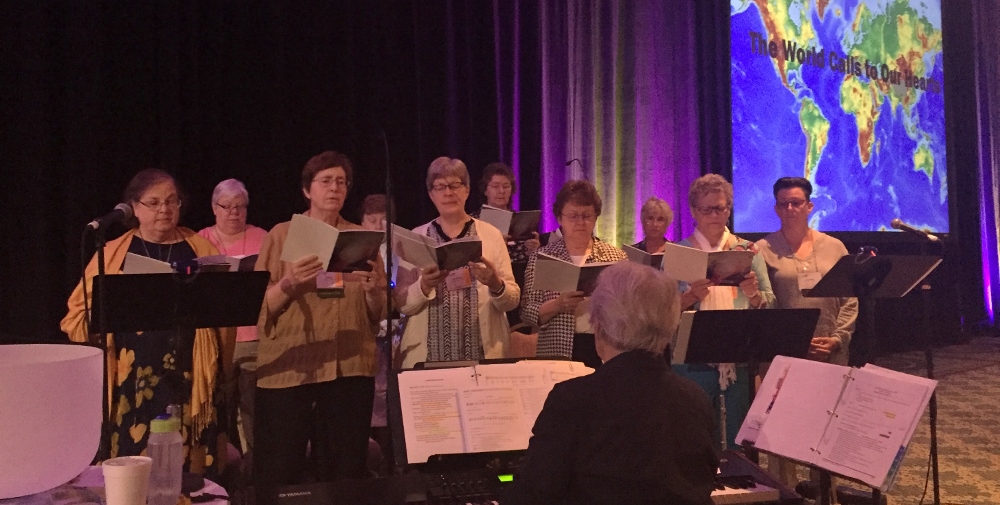 The vitality of consecrated life and eruption of spiritual energy is more evident when looking beyond the European/Western world of religious, she said. Citing various worldwide gatherings of younger religious, Pellegrino highlighted their conclusions for a need to collaborate, calling for "bold creativity to promote enculturation of charisms without cultural rigidity."

"Consider what God and humanity are asking for today," she echoed throughout her address, noting how Catholic sisters in the United States are from 83 countries on six continents.

"Consider what this ecclesial reality of cultural and ethnic diversity witnesses to in a country whose government threatens to close or limit access to its borders in some new way with each passing day."

"Consider what it might mean to bring the spiritual maturity and historical depth of centuries-old spiritualties and charisms to bear on the life and development of emerging communities in the church."

Hope and examples can be found in the younger cohort of women religious today, who Pellegrino said are more culturally, ethnically, theologically and ecclesiologically diverse than their older counterparts.

"These women are not naïve, nor do they lack a sense of history," she said. "They're well aware of the boundaries they're crossing and equally aware of Pope Francis' call and reminder to religious men and women everywhere that our life — and each of us by virtue of our vocation — are to be witnesses of communion in and for a broken world."

But while Pellegrino's call was an argument for optimism, she ended her presidential address on a somber note, acknowledging the week's underlying theme of grief and the heartbreak that weighs on her sisters outside the assembly.

She said sisters have vigiled at too many deathbeds, hosted too many wakes of friends and mentors.

"These are the heartbreaking losses that belong to God's time and not our own," Pellegrino said, adding that they grieve together for death, but also for institutional losses that blur their comprehension for what the future holds.

"Our own grief is a gateway to grace, not only for ourselves, but for our world. The grace that will come from embracing this paschal narrative of communion will be costly, but it will not diminish us," Pellegrino said. "It will take our best energy and will not consume us. It will open us to the vitality that lies deep at the heart of communion with God, with another and with the wider world. It will help us to speak new languages, and apprehend new images and tell new stories. 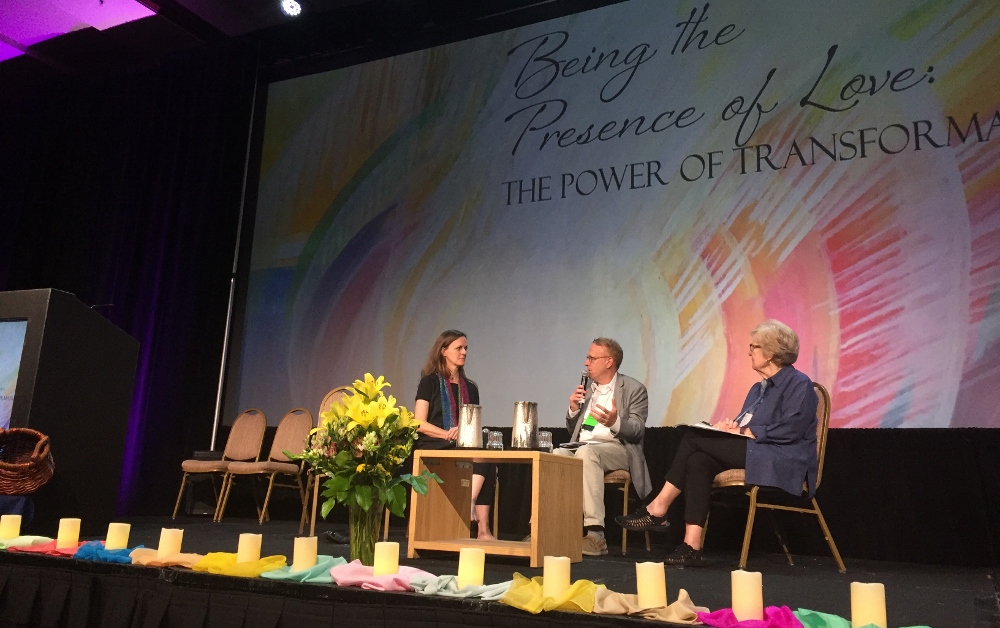 The relationship between love and grief

To be undone and remade by grief's hand is a messy, scary and cathartic process, said the keynote speaker for Aug. 10, Jan Richardson, an artist, author and ordained United Methodist minister**.

Richardson discussed her emotional journey following the unexpected death of her husband, Gary; he died in 2013 just three and a half years after they had married. In him, she both found and quickly lost her creative partner and "co-conspirator."

She invited the sisters to consider what it means to "be the presence of love" (the theme of the assembly) even when it seems that the "love that's been present seems to have left us." She said death is a process that can come in many forms: a physical death, the death of a dream, loss of a familiar lifestyle, or "the ending or changing of a community that has held our hearts."

That death is universal and yet can take such different forms for each of us, she said, has been "one of the strange and beautiful things about navigating grief in the wake of my husband's death."

"It has been crucial to me to attend well to the grief, to give it time and space, to let it say what it needs to say. … Call it my personal protest or act of resistance in a culture that so often wants to urge us along in our grief, wants us to move on beyond our mourning, wants us to be OK, because not being OK can make other people uncomfortable."

If we try to hurry along the grief, Richardson said, we risk missing the presence of love.

"May my love be more fierce than my grief," she repeated, a special prayer for her in this particular moment of grieving.

A seemingly subtle but distressing adjustment Richardson didn't anticipate was her new relationship with pronouns and tenses: What was once "we" and "ours" had become "I" and "mine."

Video that Richardson shared during her presentation

Richardson was later joined on stage by the previous day's keynote speaker, Christopher Pramuk, a theologian at Regis University in Denver who also touched on grief in his address.

The two discussed how each other's different approaches to the subject moved or provoked the other, each having bared their soul differently: Pramuk at the piano, Richardson with the poetic blessings she wove through her address.

Richardson said upon reflecting on Pramuk's use of music and mental images in his Aug. 9 address, she thought about how words, no matter how important they are to understanding and engaging one another, can only carry us so far. 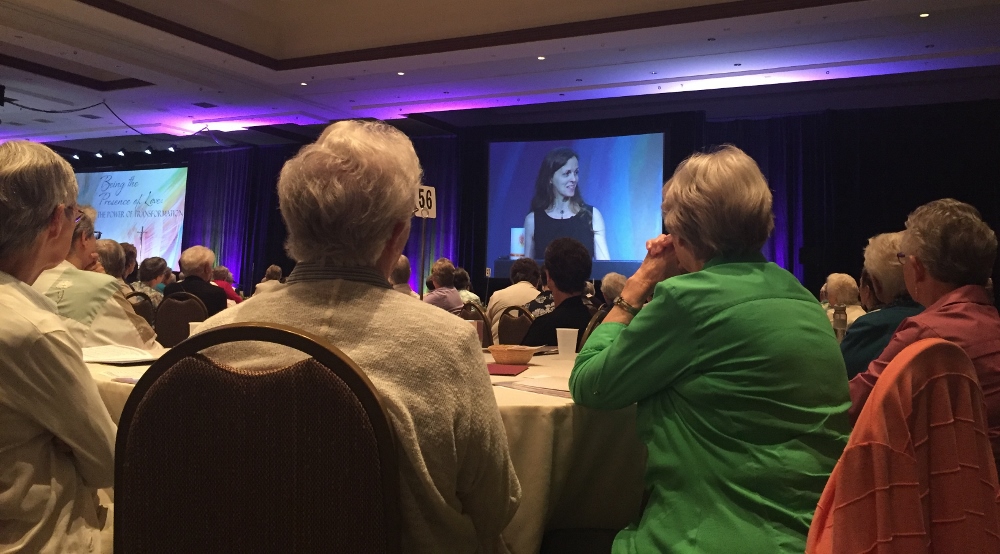 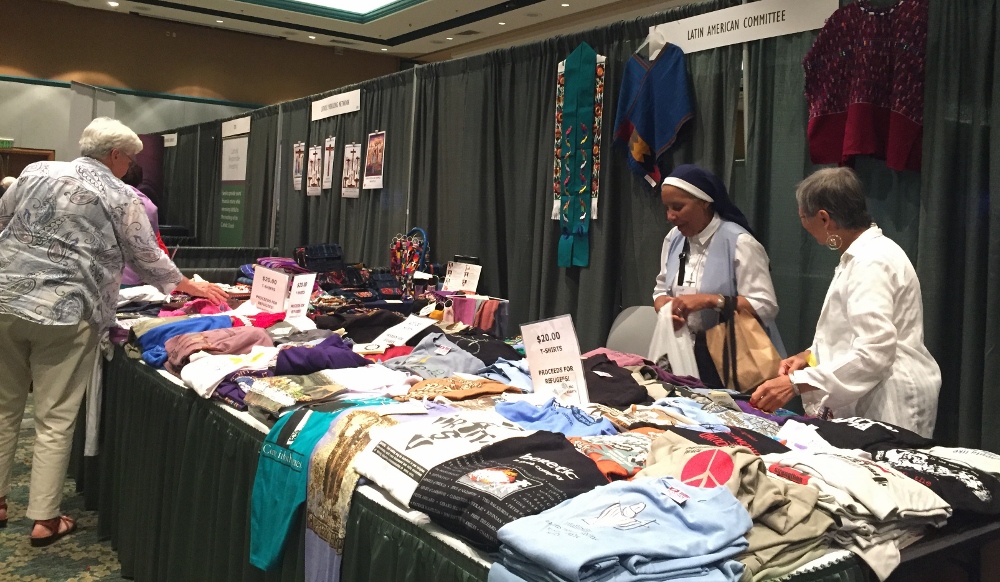 Almost 100 exhibitors set up booths at the 2017 annual assembly of the Leadership Conference of Women Religious in Orlando, Florida. (GSR photo / Soli Salgado)

"What is the work that as a community we need to do between and around those words?" she wondered. "What are the spaces that we can cultivate, to move into those nonverbal places that will carry us where words alone cannot go?"

Pramuk, in turn, mentioned Richardson's quoting of Henry David Thoreau ("There is no remedy for love, but to love more"), peculiar because her speech already made him think of his adopted 8-year-old Haitian son, Henry David, who is struggling with questions of identity.

"I never thought about his emotion in terms of grief. But as you were speaking, I realized, I think he's grieving," Pramuk said. "Sometimes it's through anger, but at the root, it's a grief for the mother he doesn't know. My son is teaching me that he grieves because he loves, that he desires to love, to know and be known."

Closing the second full day of the annual assembly, St. Joseph Sr. Liz Sweeney, the assembly's contemplative guide, revisited a quote by Ken Wilber, an American academic: The next Christ will not be some larger-than-life figure, but a communion of ordinary people deeply committed to God, to one another, and to the world.

"My sense is that we created that communion in a new way in these three days," Sweeney said. "Mary gave us a paradigm shift, a wide open vision for the future, and an invitation to go deeply into our grief. It feels like a new path is opening up, and for me, that's what this whole time feels like.

*An earlier version of this story gave an incorrect number of sisters attending the assembly.

**An earlier version of this story gave the incorrect denomination.

Religious Life | Grief is a gateway to grace, which can remake the world, LCWR president tells 2017 assembly

Sartain to LCWR assembly: I'm here 'as a brother and a friend'

Documentaries turn the camera on sisters