Of the nearly 50,000 women religious in the United States today, 8 percent were born elsewhere, a new study shows.

The two-and-a-half-year study by the GHR Foundation, Trinity Washington University and the Center for Applied Research in the Apostolate at Georgetown University, released today, found more than 4,000 international sisters in the United States for formation, ministry or education.

Lead author Notre Dame de Namur Sr. Mary Johnson said the first-of-its-kind study shows the diversity of women religious not just around the world, but in the United States. Johnson is a distinguished professor of sociology and religious studies at Trinity Washington University.

"We really set out on an adventure to see how many international sisters we could find. We were thrilled when we were able to find over 4,000," Johnson said. "It's part of the global sisterhood that we are beginning to talk more about and envision."

The study found sisters in the United States from 83 countries on six continents, with 33 percent from Asia and 28 percent from Europe. Nearly four in every 10 sisters from Asia were from Vietnam, while 41 percent of those from Europe were from Ireland.

Kathleen Mahoney, senior program officer for the GHR Foundation, said officials had heard enough anecdotal reports about international sisters — both their contributions to the church in America and their often-unique needs — that a study was warranted.

"Good data and information help us approach grant-making more objectively and thoughtfully," Mahoney said. "The results of the study will help GHR, as well as congregations and other organizations, better understand the needs, motivations and challenges of international sisters and help us support international sisters as they contribute to the life and vitality of women religious here in the United States."

"The experience has often been mutually enriching, with older sisters offering gifts of life experience, wisdom and support, especially in the form of help with the English language, and the younger international sisters sharing their cultures, congregational stories, energy and unique insights as they begin life and work in a new country," the study says.

Support can include financial support, housing, language assistance, help with legal and immigration issues, and transportation. And since the study found that international sisters tend to be younger, that support is often vital.

Eighteen percent of international sisters in the study are between the ages of 20 and 39, and 37 percent are 40 to 59. Their average age is 58, while the average age of U.S.-born sisters is nearly 80.

And while the study found that international sisters sometimes suffer from a loss of community or struggle with language or cultural issues, it's not for a lack of education: Nearly three in four have at least a bachelor's degree, and 53 percent have a graduate or professional degree.

Johnson said that although the timing was unintentional, the release of a comprehensive study of international sisters while immigration is one of the biggest political topics in the United States is a reminder of Catholics' belief in welcoming the stranger.

"The study helps us realize that our church is more diverse, wherever we are. These international sisters and the people they minister to are in rural areas, urban areas, in all kinds of institutes and ministries. They're present in so many ways that sometimes we don't even see," Johnson said. "The second contribution the study makes is to the wider society against the backdrop of the political debate over immigration. It demonstrates how complex and beautiful the tapestry of immigrants is in our church and in our society."

Twenty-three percent entered their congregation outside the United States then were sent here for education or religious formation.

Lovers of the Holy Cross Sr. Thu T. Do, a visiting researcher at CARA who helped work on the study, was sent to the United States by her congregation in Vietnam to work on a doctorate in higher education at St. Louis University.

But she also had American sisters for support. Do lived with the School Sisters of Notre Dame in St. Louis and now lives with the Sisters of the Visitation of Holy Mary in Washington, D.C.

"I did not have any difficulty living with American sisters at all. In fact, I found myself having received lot of support from the sisters," Do said. "I did not see a difference in terms of how they treat their own sisters and how they treated me."

Do said international sisters are often asked to come to help minister to parishioners of their own background.

"In Vietnam after the war, we have been blessed to have new, young vocations entering religious life," Do said. "But the needs of the Vietnamese communities in the United States are still there, so that's why the pastors in Vietnamese communities here love to have sisters from Vietnam come here and provide support for their parishioners."

Johnson said the team is now working on a book about the study, which will contain more qualitative data than the largely quantitative study report was able to include. She said she is grateful for the leaders of all the congregations that responded to the study, the sisters who participated in interviews and focus groups, and the vicars of religious who helped locate them.

"Data keeps coming at us about how diverse the United States is becoming ... but perhaps we need more stories told, because the numbers alone aren't helping us see the tremendous demographic shift in our church and in our society," Johnson said. "These sisters help tell those stories." 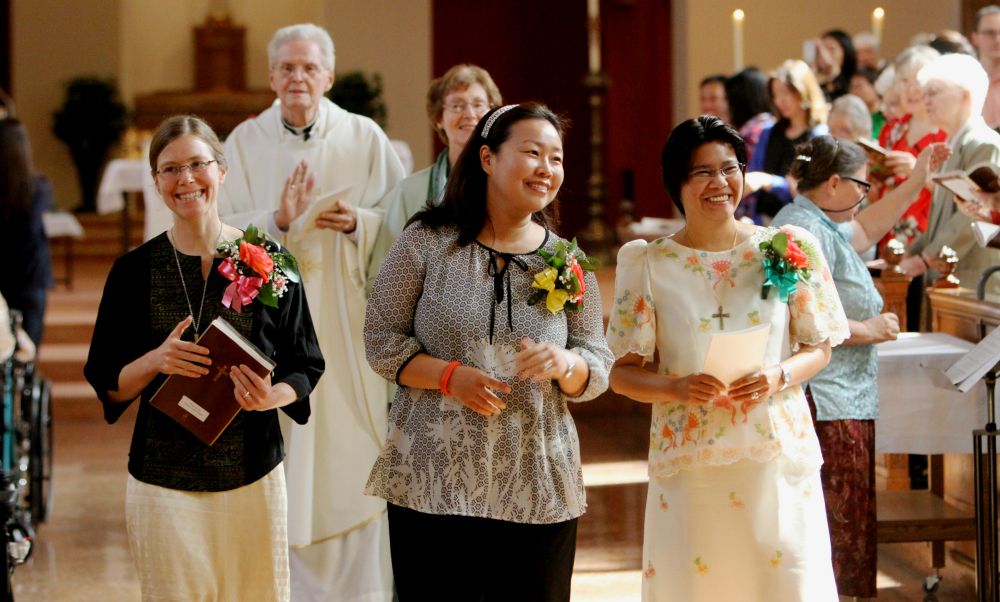