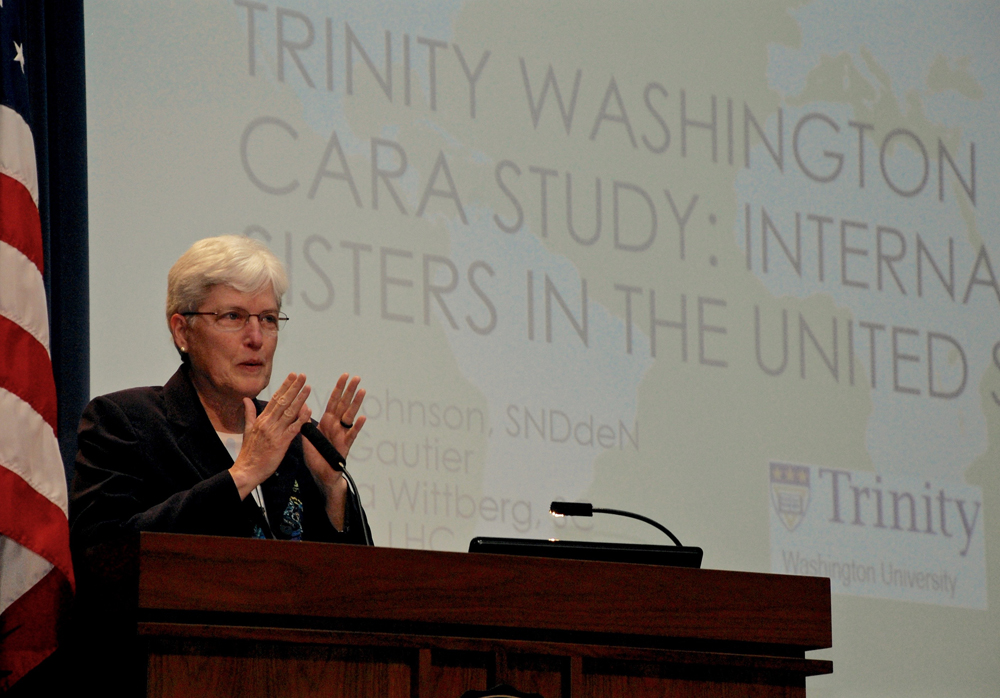 Sister of Notre Dame de Namur Mary Johnson, a distinguished professor of sociology and religious studies at Trinity Washington University, speaks April 6 at the "Too Small a World" conference at the University of Notre Dame in Indiana. (GSR photo / Dan Stockman)

South Bend, Indiana — The influx of foreign-born sisters coming to minister in the United States that occurred 100 years ago is happening again, Sister of Notre Dame de Namur Mary Johnson told a group of historians and scholars April 6.

Speaking about the study on international sisters released March 3, Johnson said the past is prologue, as her recent study found more than 4,000 foreign-born women religious ministering and studying in the United States, though there are certainly many more.

"The history you're studying will resonate in [this] sociological study," Johnson told the more than 70 people who gathered April 6-8 at the University of Notre Dame for "Too Small A World: Catholic Sisters as Global Missionaries," hosted by the Cushwa Center for the Study of American Catholicism. "We believe this is just the tip of the iceberg. We can't yet describe how big the iceberg is, but it's clear this will be a defining phenomenon in the Catholic Church."

Kathleen Sprows Cummings, executive director of the Cushwa Center, told participants the conference was timed to coincide with the 100th anniversary of the death of St. Frances Xavier Cabrini, founder of the Missionary Sisters of the Sacred Heart of Jesus.

Sr. Barbara Staley, the current superior general of the congregation Cabrini founded, said a conference dedicated to studying the grand missionary efforts of the past makes it easy to long for those days, which is dangerous. She knows this, she said, because her own order has such an idolized founder.

"We are not here to perpetuate ourselves or perpetuate what we have been," Staley said. "Sometimes, I worry, the Missionary Sisters of the Sacred Heart of Jesus are very good at maintaining and sustaining the cult of Mother Cabrini and not always as good about the devotion to Jesus." 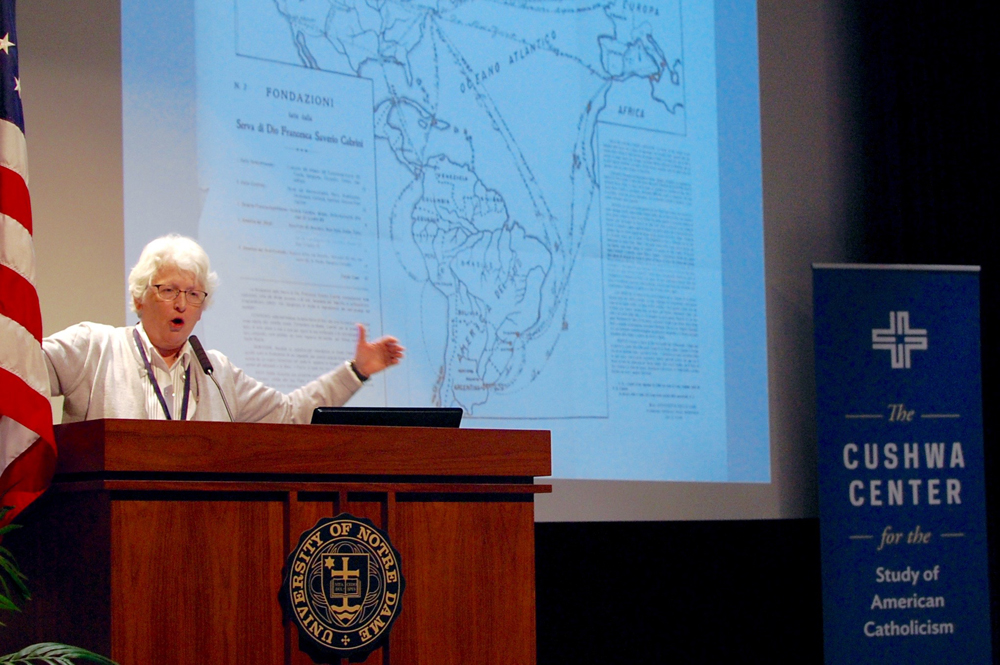 Sr. Barbara Staley, the current superior general of the Missionary Sisters of the Sacred Heart of Jesus, speaks at the "Too Small a World" conference April 6-8 at the University of Notre Dame in Indiana. (GSR photo / Dan Stockman)

The important thing in studying the past, she said, is to remember the example set.

"We need to be prophetic witnesses of our God, who is a God without boundaries and borders," Staley said. "Do we still need global missionaries today? I would give a heartfelt and resounding 'yes.' "

Being a missionary doesn't necessarily mean long-distance travel. Margaret McGuinness, a professor at La Salle University, gave a presentation on the Sisters of the Blessed Sacrament ministering in African-American neighborhoods in Philadelphia — in some cases, just a few miles from the missionary's family home. What mattered, she said, was not the distance, but that they were ministering to those in need.

"This is what Catherine Drexel and the Sisters of the Blessed Sacrament cared about most — seeing God in the faces of those they served," McGuinness said. 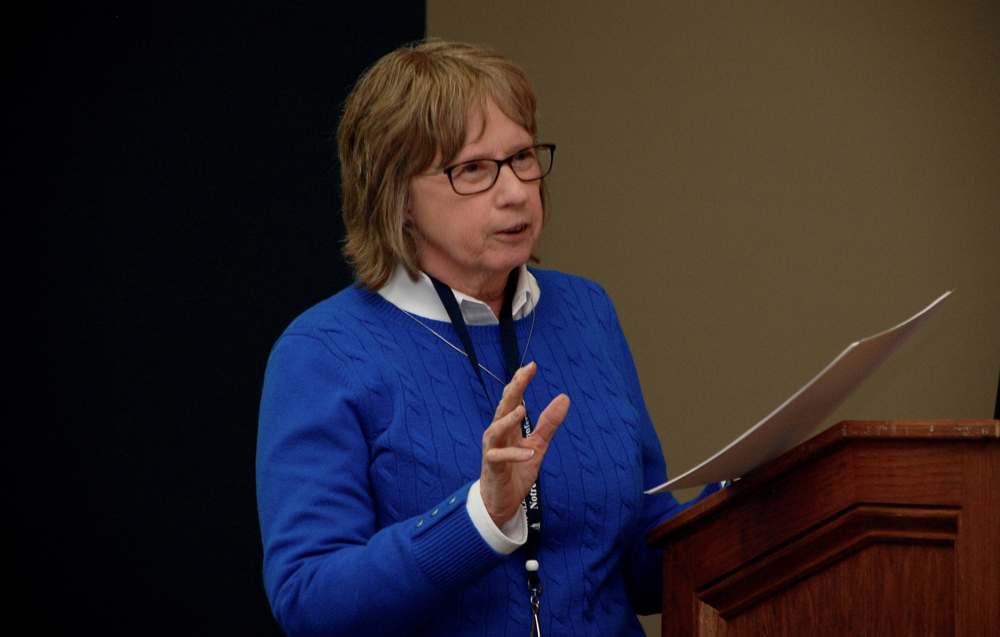 Margaret McGuinness, a professor at La Salle University, gives a presentation on the Sisters of the Blessed Sacrament ministering in African-American neighborhoods in Philadelphia at the "Too Small a World" conference April 6-8 at the University of Notre Dame in Indiana. (GSR photo / Dan Stockman)

The Sisters of St. Joseph in Philadelphia echoed that story, said Ryan Murphy, a doctoral student at Temple University. Many of the sisters wanted to do missionary work when they were discerning the call to religious life but ended up in a congregation that only sent out missionaries much later and in far fewer numbers than other communities.

And yet, he said, they were in fact missionaries to the poor, urban neighborhoods they were so dedicated to, even as the Philadelphia archdiocese closed parishes and shuttered schools.

Missionary work is always transformative, but for some sisters, the work spanned — and caused — more transformation than they imagined, said Mary Beth Fraser Connolly from Purdue University Northwest.

Connolly spoke about a group of Sisters of Mercy who were sent as missionaries to Peru, leaving before the Second Vatican Council and its calls for renewal and returning to a vastly changed religious landscape.

"They left in full habit and returned to a congregation in modified habit or none at all," she said.

The sisters in Peru changed, as well: One sister told Connolly the mission as conceived in 1961 was not what the people in Peru needed, as it was structured to be a carbon copy of the community in Chicago and its emphasis on adherence to the rules. Further, the sister told Connolly they thought they were going to Peru to evangelize but realized when they got there that the people were already Catholic.

By the time they left Peru, the sister said they were questioning why they were there at all, a feeling that continued when they returned home to the discerning and renewal that Vatican II sparked.

"Upon her return to the United States, she had to refind her place in religious life," Connolly said.

For others, the journey itself was transformative. Deirdre Raftery, an associate professor at the University College of Dublin, studied the travel diaries of sisters going to the mission fields in the late 1800s. The five- or six-week journey by ship suspended time so completely and so long that some sisters changed their mind about being missionaries or even about religious life, with some of them marrying the ship's officers.

"This global sisterhood is evolving from the missionary spirit sisters have always had," Nassif said. 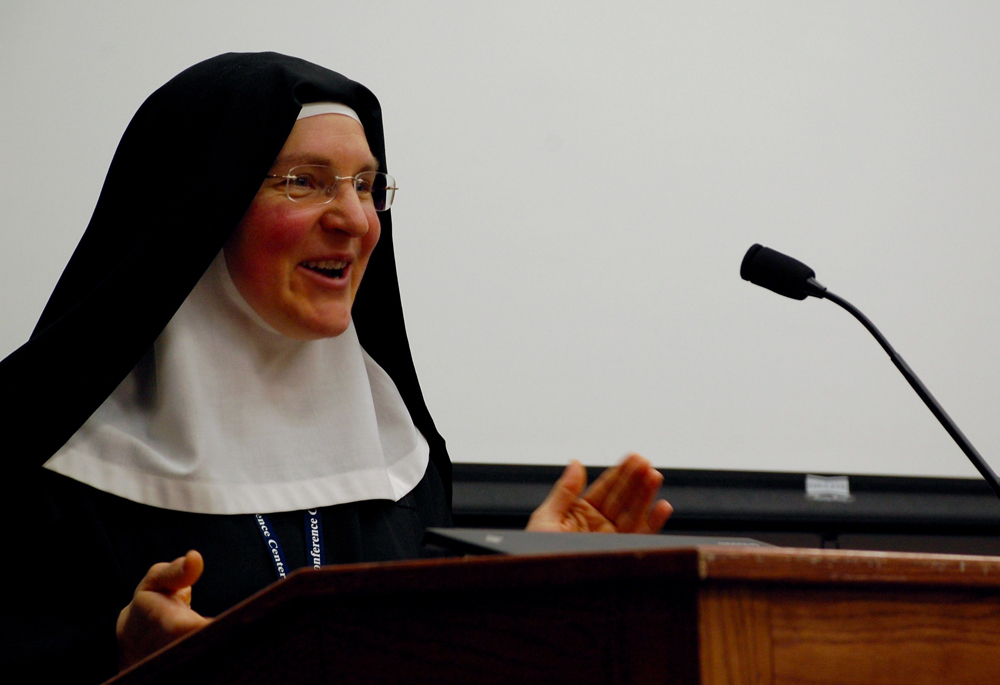 Benedictine Sr. Makrina Finlay speaks at the "Too Small a World" conference April 6-8 at the University of Notre Dame in Indiana. (GSR photo / Dan Stockman)

The Sisters of the Holy Cross and the Center for Spirituality at St. Mary's College also sponsored the conference. The conference schedule included a field trip to the National Shrine of St. Frances Xavier Cabrini in Chicago on April 8.

Struggles of the newest religious congregations