Skip to main content
This story appears in the LCWR 2017 and LCWR feature series.

The 2017 assembly for the Leadership Conference of Women Religious (LCWR) in Orlando, Florida, is not going to be a business meeting. It will be a spiritual experience, said Sr. Catherine Bertrand, a School Sister of Notre Dame and the assembly's facilitator, with as many experiences as women in the room. The conference represents about 80 percent of the 48,500-some women religious in the U.S.

Because of the popularity of last year's format, the conference will engage in contemplative dialogue for the second time at its Aug. 8-11 assembly.

And for the first time, LCWR is presenting its Outstanding Leadership Award to a contemplative sister, Carmelite Sr. Constance Fitzgerald. Her academic work has transformed the understanding of contemplative life today, said Immaculate Heart of Mary Sr. Annmarie Sanders, adding that Fitzgerald was "the face of renewal for contemplative nuns after Vatican II."

This year's contemplations will be laced with the theme "The Transformative Power of Love" as well as the subject of grief, which will be addressed by the two keynote speakers: Jan Richardson, a United Methodist minister, and Christopher Pramuk, a theologian from Regis University in Denver*.

While the theme of love has been in the pipeline for some time, St. Joseph Sr. Liz Sweeney, who will be the contemplative guide at the assembly, said the timing worked out perfectly.

"I think the current world situation makes it even more urgent that we learn ways to be the presence of love in every situation," she said. "It's certainly needed in our world because it's a countercultural kind of presence."

Bertrand said she hopes this theme, coupled with the practice of contemplative dialogue, will encourage an "outward thrust and moment."

"This isn't something that women religious just thought out," she said. "There's like a movement of mindfulness, this desire to slow down, to be more aware, to listen more intently, to really have a different consciousness in how we relate to each other. And it seems it couldn't be more timely, given what's going on in our world and country and church."

Reflection must be met with action if contemplation is to be done effectively, she added.

"We need to recognize the ultimate power of transformation in love that is expressed and recognize what is being asked of LCWR."

One idea born out of contemplation came to Sr. Kathleen Kanet, a Religious of the Sacred Heart of Mary: Have every Catholic sister write a letter to Speaker of the House Paul Ryan regarding the federal budget.

Using the LCWR assembly as a platform to launch the campaign, NETWORK, a Catholic social justice lobby, will offer members letter-writing toolkits, aiming for 2,000 letters to be delivered to Ryan to his office in Wisconsin the first week of December.

NETWORK made a splash July 24 when it released a letter signed by 7,150 sisters to protest the repeal of the Patient Protection and Affordable Care Act as well as cuts in Medicaid.

"We're thinking about how we can continue to lift up voices, so we wanted to move forward and turn this into a campaign," said Meg Olson, NETWORK's lead grassroots organizer.

Priorities outlined in the letter include funding for the 2020 census so a more accurate population count can lead to increased funds toward underserved communities, funding affordable housing, and reduced funds for the Department of Homeland Security, particularly in regard to Immigration and Customs Enforcement, deportations, detention centers, and a potential border wall.

Sisters can participate in the campaign by visiting NETWORK's booth, which will be one of 94 exhibitors at the assembly.

The assembly's agenda includes ongoing conversations regarding the structure of LCWR, such as a second look at the roles and responsibilities of the board and presidents, Bertrand said. These questions have been percolating at the regional level and have floated to the conference's lineup for discussion.

During the week, St. Joseph Sr. Mary Pellegrino will transition from president to past-president, while Sister of Charity of the Incarnate Word Teresa Maya, the current president-elect, will assume the presidency.

The power of love and grief

Last year's assembly used contemplative dialogue as a force for honing the mystical aspect of sisters' lives, Sweeney said, while this year, they'll be more committed to embodying love, applying contemplation to the real world.

"How can you be the presence of love in situations that are challenging, in situations where you're tired at the end of the day?" Sweeney said. "I think it's connecting the inner dimension of our lives with the outer dimension, connecting contemplation with everyday life."

Though this won't be the first time the conference engages in contemplative dialogue, Bertrand said this process still takes practice for the group.

"We're great problem-solvers, so to be efficient and expedient is probably our more natural way of processing," she said. "But [we need] to slow down and allow a time to be messy and really trust that in the end, this not only helps the processing of the group but hopefully really impacts the outcome."

"How do we allow the 'how' we go about this to be as significant as the 'what' result?"

In addition to reflecting on the transformative power of love, LCWR members will integrate the power of grief in their conversations, spearheaded by keynote speakers Richardson and Pramuk.

Richardson's husband died unexpectedly three years ago, and she has worked through her grief to discover new creative energy within herself, Sanders said. Pramuk, on the other hand, will focus on accessing the communion of saints while discussing what it means to be vulnerable in the presence of grief.

Sanders said both will address how women religious get through this "time of great loss in religious life, from places of deep faith and hope in what working with that grief can bring about in terms of creativity."

"Part of any transformative process involves a letting-go," she said. "It's always a matter of trying to choose new life, trying to choose a way forward, a loving response, but it doesn't come without something else needing to be let go of."

Sweeney and Bertrand both noted that communities are dealing with property loss, deaths, a change in infrastructure and, for some, possibly their last generation.

"The sands are very much shifting in terms of religious life these days," Bertrand said. "And while there's definitely very apparent changes — we can beat the drum of diminishment to death if we wanted to — we also need to look at what's evolving and what's new that's coming forth. So while you can celebrate that, there's still letting go, and that invites a need to grieve, to let go of that."

"Religious life is going to look very different, but it isn't all doom and gloom," she added. "But it still requires an admission of letting go of some things we've come to cherish ... I think we're quite a powerhouse, and while the critical mass is over, we're far from dead yet."

On the last morning of the assembly, four young LCWR members will lead a conversation regarding what they see when they look toward the future of religious life. Among the panelists, one is Mexican-American and the other is Chilean.

"We think they represent the future of religious life, so I'm eager to hear what they have to say," Sanders said.

Concluding the gathering Aug. 11, members will be asked to reflect on what the panel of young women have said and to make commitments as a leadership team that emulates what they've observed throughout the week.

"Hopefully, LCWR members go home nourished but also ready to respond to whatever is being asked of them, not just in leadership but also world needs," Bertrand said. "The fact that we're all going to be leaving that meeting and going to so many different locations, I'm hoping we really are transformative energy for our world."

*An earlier version of this article listed Pramuk's former position at Xavier University. He began with Regis University on Aug. 1. 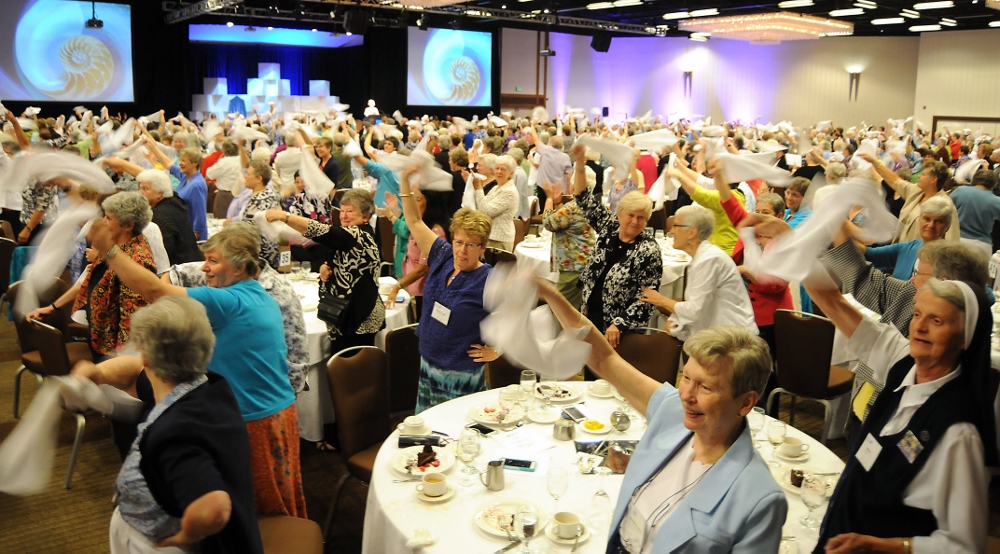 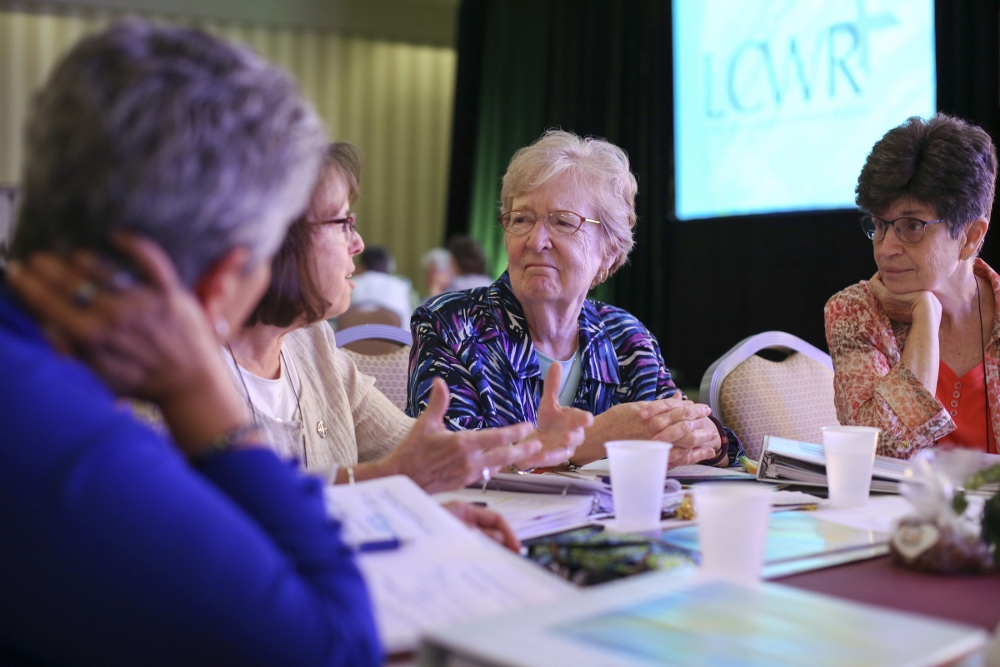 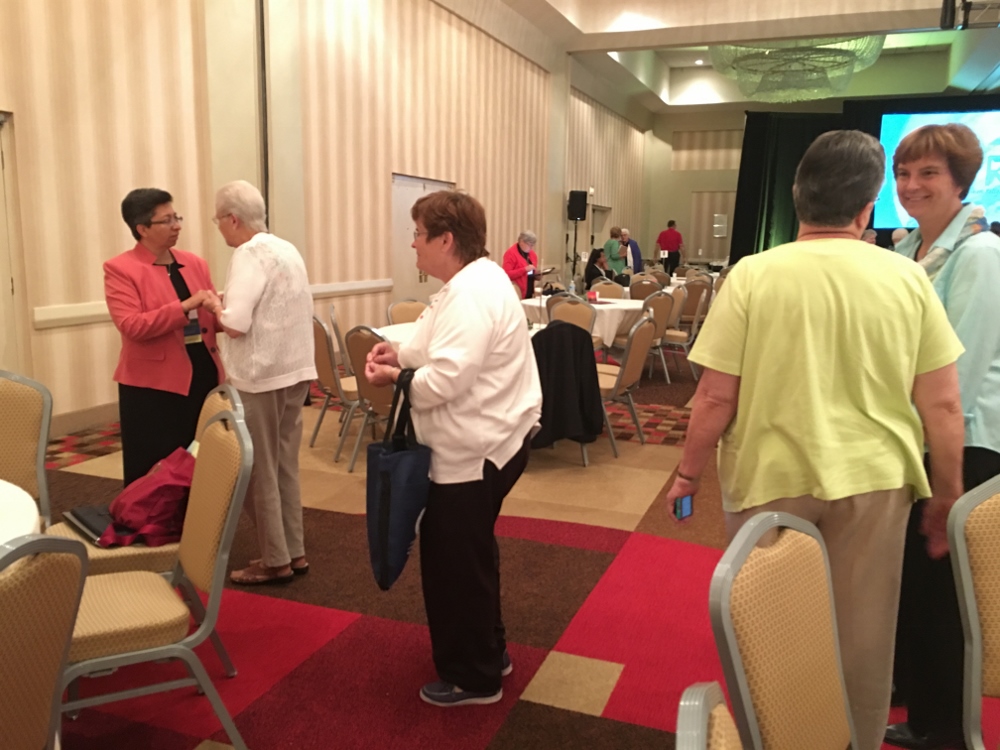 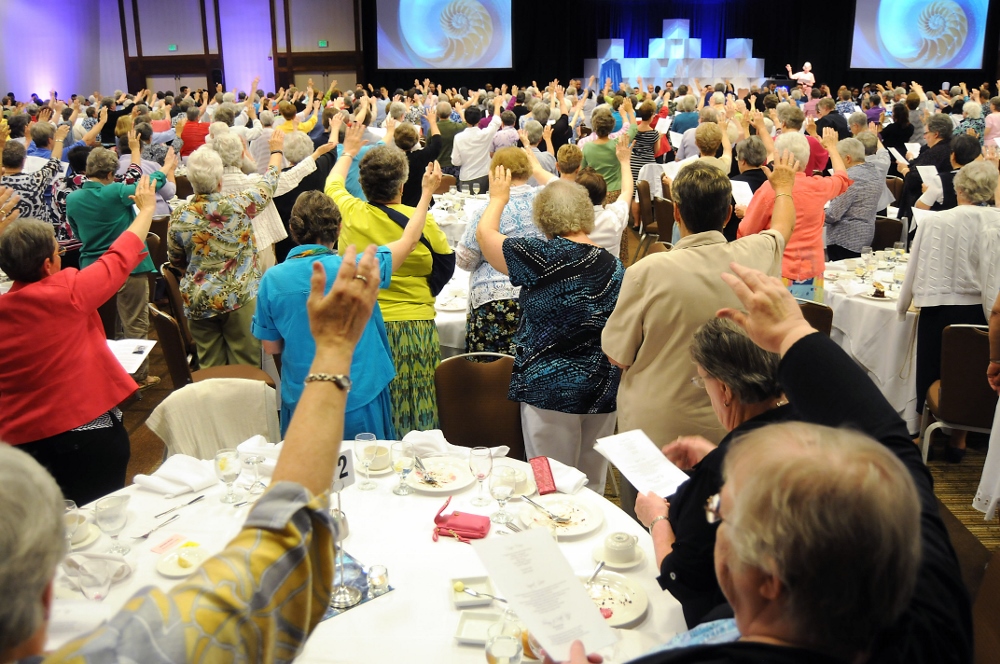