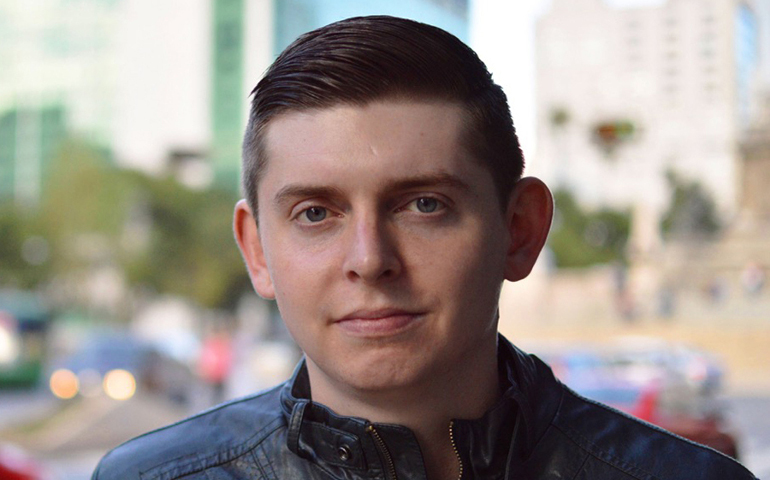 Cody Weddle is pictured in this undated photo. (CNS/Courtesy of Global Sisters Report)

A Global Sisters Report and Catholic News Service contributor in Caracas, Venezuela, was taken by military counterintelligence officials after his home was raided early March 6.

Cody Weddle, 29, best known for reporting for Miami ABC affiliate WPLG and The Miami Herald, was held more than 12 hours before Venezuelan authorities escorted him to the airport to return to the U.S. His assistant, Carlos Camacho, also was held but was later released.

Weddle had reported on air March 5 about Venezuelan opposition leader Juan Guaidó's return to the country.

The Venezuelan journalists union first posted about Weddle's arrest on Twitter early March 6. WPLG announced later that attempts to reach Weddle had been unsuccessful, but said his housekeeper reported he was arrested "with his passport, other documents, money and a large suitcase."

A spokesman for the U.S. Embassy to Venezuela told Catholic News Service the embassy was aware of the arrest but could not share information.

"We ask Venezuelan gov't to release him and Carlos Camacho immediately," Erlandson said in a tweet March 6. "We urge the U.S. government to advocate on Cody's behalf and ask for prayers for his safety."

Weddle, a 2012 graduate of Virginia Tech University, has degrees in journalism and political science. He has reported from Venezuela for several years.

In addition to reporting on Venezuelan politics, he has reported on church issues for Catholic News Service and for Global Sisters Report, a project of National Catholic Reporter. In January, he reported for CNS about the Venezuelan bishops' statements that called anti-government street protests "a sign of hope" and called Venezuelan President Nicolas Maduro's government "illegitimate."

In August, he traveled to Colombia to cover the Latin American bishops' council meeting marking 50 years since their meeting expressing a preferential option for the poor.

His most recent story for Global Sisters Report was how nursing homes run by women religious were enduring Venezuela's economic crisis.

Venezuela, which has spent years in a downward economic spiral, is facing a constitutional crisis. In January, Guaidó, leader of the opposition-led National Assembly, declared himself interim president of Venezuela after allegations that Maduro's re-election last year was rigged. Dozens of countries have recognized Guaidó as interim president, but military leaders continue to back Maduro.