Women religious leaders reflected on themes of Trinitarian theology, physics as a lesson on wholeness and fragmentation, and how racism harms all of society as the Leadership Conference of Women Religious assembly continued into its second day.

Sr. Jayne Helmlinger, general superior of the Sisters of St. Joseph of Orange, California, was voted as president elect of LCWR. Holy Cross Sr. Sharlet Wagner becomes president and Sister of Charity of the Incarnate Word Teresa Maya past president. The blessing of the new leadership team takes place Aug. 10, shortly before Sr. Anita Baird, a Daughter of the Heart of Mary, receives the Outstanding Leadership Award for her work in education about racism.

Keynote speakers developed the assembly theme of being the presence of love and the power of communion. In the first keynote address, a Shakespearean reflection — "To be, or not to be?" — took on a specific focus: What does it mean to be?

St. Joseph of Philadelphia Sr. Gloria Schaab reflected on this question to the almost 800 sisters at the assembly Aug. 8, drawing on her expertise in Trinitarian theology.

Invoking Catholic theologians throughout history, she added, "The persons of the Trinity do not have relation to one another; their divine nature is relation. ... We are patterns that connect," said the professor and chair of the department of theology and philosophy at Barry University.

And therein lies the answer to the question: "To be is to be in relation."

Whether contemplating the cosmos, humanity or God, Schaab said, "three types of relation interact to make us who or what we are; these three relations are a relation of origin, a relation of effect, and a relation of emergence."

Although "relation is our reality," she said, communion requires intention. To illustrate how communion can come about, Schaab offered the symbol of the kaleidoscope, in which many parts play a unique role to produce clear, beautiful patterns.

"Applied to the model to religious life, the shards and fragments are the present realities of ministry, of community, and of membership," she said with a backdrop of animated kaleidoscopic images. "While an image of wholeness emerges, it does so from brokenness, from the sharp and irregular edges of glass, when they are illuminated, reflected and acted upon through structures that promote interaction and engagement."

The casing that contains both the beauty and brokenness represents governance — "the creative structures and processes that have emerged through which we engage one another in response to the changing realities of ministry, membership and community."

Three kaleidoscopes at Schaab's podium, each made of different materials, illustrated the different types of governance. Some are made of durable material, but are less attractive. Some are made from living sources and thus withstand changing conditions. Others are formed of brittle material and are unable to respond to change.

The mirrors within the instruments represent the members: the better the quality, the sharper the image; the keener the angles, the more accurate; the greater the number of reflections, the more inclusive.

"To my mind, the charism is the light that illuminates the process," Schaab said. "It is the source of enlightenment that produces living, dynamic, expansive and inclusive forms of being together, of being for the other — communion."

"Living in Trinitarian relation in our world calls us to foster nonhierarchical relationships of inclusivity; to transform social, ethical and political systems; and to imitate divine solidarity with human suffering," Schaab said, adding that when modeled on the Trinity, "power is shared, elitism is dismantled, discrimination is eliminated, and competition is neutralized."

"Modeling such inclusiveness, interdependence and cooperation in our religious congregations can serve as a prophetic countercultural presence in the midst of a suffering world," she said. "And in this suffering world, living in Trinitarian relation calls us to imitate divine solidarity with those who suffer, incarnating the very nature of God as Love."

An antidote to fragmentation

For Heidi Russell, the keynote speaker who addressed the LCWR assembly Aug. 9, moving from the image of "God as Being to the image of God as Love" was key in helping her shift her concept of God to one who does things "through us."

An associate professor at the Institute of Pastoral Studies at Loyola University Chicago, Russell said, "God who is Love means we are called to confront the evils and fragmentation of the world. ... God's promise is not to fix it for us, but to be with us and in us."

Russell cited physicist David Bohm, who "has an image of the way in which wholeness enfolded, meaning folded into, and then unfolded in the world."

"Bohm's idea of implicate order is the idea that the whole creates and organizes the parts in such a way that the order or design of the whole is enfolded in each part," she said. "The whole dwells at the core of each part and then unfolds itself in and through all of the parts. Each part is unique, in that it unfolds its own independent yet interconnected existence, but as it does so, it participates in the unfolding of the whole."

In a world of fragmentation, she said quoting Bohm, things are more easily understood when broken down into parts. And while this breaking down can be a useful way of thinking, "it can be bad when we divide humanity along ethnic, racial, nationalistic or class lines. The Trinity can be an antidote for this fragmentation."

Russell shared how this relationship helped alter her implicit bias, one that is prevalent among white Americans, however subtle and unconscious, after she adopted children who are black.

Implicit bias is an internalization of fragmentation, she said, encouraging an us-them mentality. Studies show that people in the United States perceive black men as bigger and stronger, therefore more threatening, than white men. Before she adopted children of color, Russell, who took the test, said her results also showed an implicit preference for white people. Though unintentional, this fragmentation can only be healed through relationships — just as Russell had experienced through motherhood.

"Implicit and perception biases also mean we cannot address this issue of race without understanding that we are interconnected parts of a whole," she said. One example of fragmentation involving racial bias occurs with police shootings involving black victims, as cases of individual circumstances rather than as "a pattern that emerges when one looks at the whole."

Black Lives Matter, a movement that challenges society to acknowledge the patterns in violence against black people, can be illustrated through St. Paul's metaphor, Russell said: "One part of the body is in pain and needs the attention of the whole body."

"There is nothing that happens to one part that is not also happening to the whole," she said.

While women religious are reflecting on white privilege and their role in whitewashing their histories, Russell said, the Catholic Church has been noticeably sitting out the conversation around Black Lives Matter.

Russell recalled reading an interview with Shannen Dee Williams, a history professor at the University of Knoxville who addressed the LCWR assembly in 2016 and played an instrumental role in the initial reckoning for sisters. In the interview, Williams wondered:

Does the bishops' collective silence toward the growing Black Lives Matter movement mean something different if you remember their reluctance to endorse the Brown [v. Board of Education] decision some 60 years ago? If all lives matter, then black lives matter. So, why aren't all Catholics screaming black lives matter? I think black Catholic history provides the key to answering these questions.

"While Dr. Williams has made us aware that we can no longer whitewash our history, many of your congregations are now on the forefront of fighting for racial justice, facing fragmentation with love and relationship," Russell said.

"God as Love creates a web that connects all of our life stories to one another. Our stories are interrelated parts of a whole. The whole is Love," and the calling is to recognize "those with whom we are entangled."

"We cannot know Love without knowing those people, without learning their stories," Russell said. "All of creation is part of a whole that is Love and is part of the unfolding of Love. And so, we must also understand ourselves to be one, to be entangled with all humanity, with all creation." 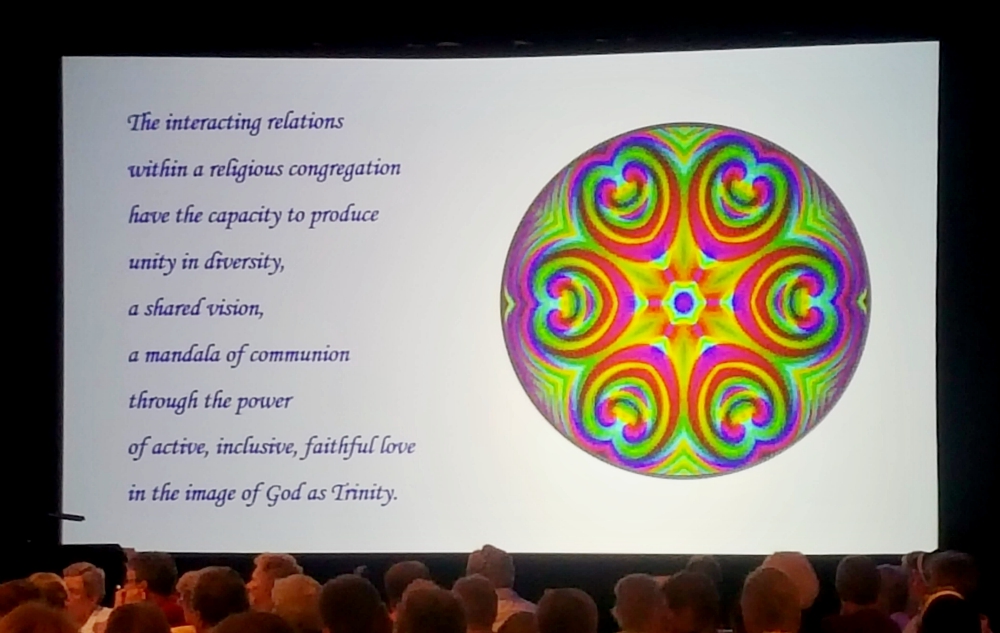 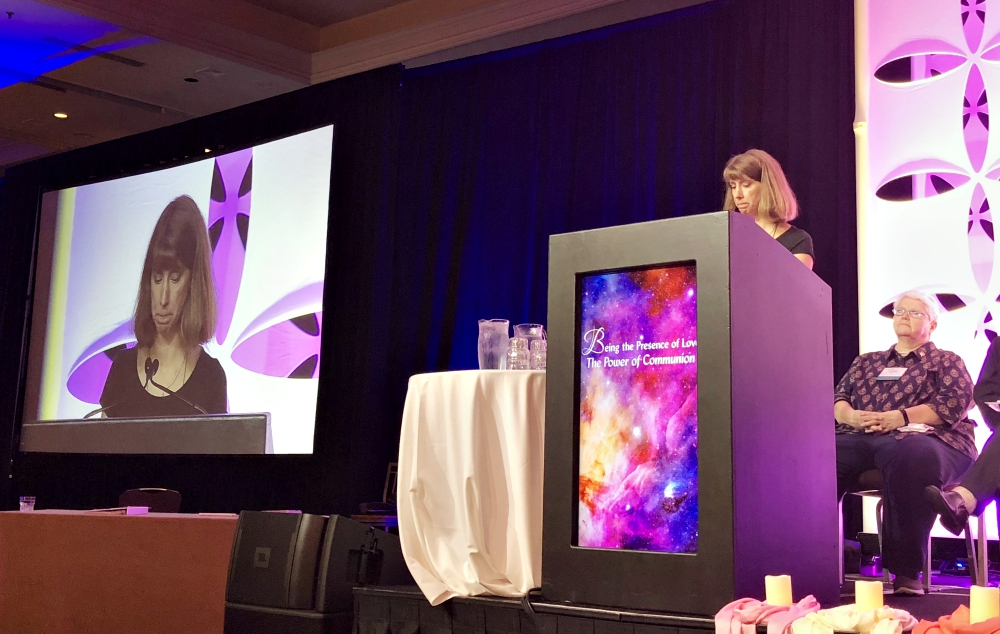