Skip to main content
This story appears in the Sustainable Development Goal 1: No Poverty feature series. View the full series.

When Sr. Magi Maria quit a comfortable teaching job to plunge into social work, neither she nor her congregation had any idea what lay ahead.

A quarter century later, more than 50,000 residents of 105 drought-prone villages in the central Indian state of Madhya Pradesh thank the Congregation of Mother Carmel nun for taking that "leap into the dark."

Her intervention has helped them break free of poverty, unemployment, malnutrition, illiteracy and enslavement.

"We did not have even a hand-to-mouth existence when we met the sister," says Gayatri Sahu, a mother of three sons and one of Maria's beneficiaries. The 45-year-old woman lives with her husband Beny Prasad Sahu and sons in Chota Khera, a village on the outskirts of the state capital of Bhopal.

When Maria met the family eight years ago, the husband was earning 50 rupees (U.S. $1.25 then) as a daily wage worker. "We had to go to bed on an empty stomach many days since he had no regular work," Gayatri Sahu told Global Sisters Report.

Her husband says now they have "enough to eat and a good house" after the Catholic nun taught the family how to make the best use of their one-acre farm.

Sahu, 49, stopped working on others' farms as he began cultivating his land. He got help from Cyriac Elias Rural Organisation for Women and Children, a group Maria started in 1991 to aid the villagers. It encouraged him to try growing multiple crops.

"Earlier I had a hard time raising even one crop a year," Sahu told GSR.

Initially, Maria encouraged the family to start a poultry farm to meet the family expenses as Sahu's income had stopped. As the crop production increased, the family stopped the poultry business and focused entirely on agriculture.

Devi Ram Lodhi is another farmer Maria has helped. She not only trained the 45-year-old father of five to work on his one-acre farm but also sent him to various places to learn modern farming techniques.

Lodhi began earning an average 150,000 rupees (U.S. $2,275) a year through multi-crop farming and stopped looking for other jobs. He recently rented 9 acres of land from his relatives and increased his income tenfold.

"I could never imagine my family would ever escape from our abject poverty and diseases," the former daily wage earner told GSR.

He and his wife work on the farm, and their 14-year-old son, Pavan Lodhi, waters vegetables before going to school. In the evening the teenager sells farm produce in the local market. "I get the best price," the 11th-grader says.

Lodhi, who is illiterate, says he now wants his children to study as much as they can because money is no longer a problem.

Such comments are heard from thousands of farmers in Bhopal, Raisen and Sehore districts where Maria now operates. More than half of the region's 5 million people live in villages and own less than 5 acres of land. Whenever rain is scarce, they have migrated to cities looking for jobs or work in big landowners' fields for meager wages.

Maria says she chose the area because the people there were vulnerable to factors such as poverty, illiteracy, malnutrition, unemployment and superstition. "They suffered all sorts of exploitation, including physical abuses. Many worked long hours but were not paid even the minimum wages," the nun recalls. No one, not even political parties, cared for them since they were poor and voiceless, she says.

Maria also found out that no government projects to alleviate poverty were reaching these people because of officials' apathy and lack of political will. "Even after 68 years of independence, India failed to improve the standard of living for millions of rural poor in this country," she says.

The 64-year-old nun said the villagers' plight disheartened her and she felt compelled to look for ways to help them.

She joined the Congregation of Mother Carmel at the age of 18, took her first vows in 1971 and made her final profession five years later. After the first profession she spent 18 years in teaching and higher studies.

She says she felt restless as a teacher, longing to reach out to the poor, her life's desire. Her superiors rejected her request to go for social work because no one in the congregation had ventured into that area until then. They were also concerned about the safety of a young nun in northern Indian villages, Maria explains.

But the superiors relented in 1989. It was "a leap into the dark" for both her as well as the congregation, Maria recalls. "My superiors left it to me to decide my course of action."

She began from Deepdi, a village in Bhopal district, in 1990, with 280,000 rupees (U.S. $16,000 then) donated by a foreign donor agency — Karl Kubel Foundation. The project was for non-formal education, skills like stitching and tailoring and also for the formation of financial support groups for village women.

Since then, Maria has not looked back.

Jeevan Singh, a program manager of her organization, says they teach women knitting, weaving, tailoring and embroidery to earn additional income for their families.

Maria says they use field trips, study tours, films, workshops and seminars for training farmers and their wives. The nun's organization has improved the general standard of education in villages and has taught people how to care for their health, Singh says.

It also has built 400 houses for the homeless, 37 ponds, two medium-sized dams and hundreds of embankments for rain harvesting to fight drought. The organization has also repaired about 500 homes.

Sister Maria's organization has helped form about 400 financial support groups for some 6,000 women in the region. Each group has a minimum 11 members who engage in micro financing. A fixed amount of money is collected from each member every month and deposited in bank accounts. In an emergency, members can borrow money from this account with only 1 percent interest.

One of the presidents, Rata Ramdas of Lawakedi panchayat in Sehore district, credits Maria for her achievement. The 41-year-old woman told GSR the women's groups now address issues affecting both them personally as well as society at large. Since Maria has worked with them, the women are no longer treated as second-class citizens in their communities, Ramdas says.

Vimla Bai, a widow and secretary of one such group, says they are now free of steep loan debt, with interest rates ranging from 60 percent to 120 percent. Maria says the villagers would fall into the loan sharks' traps whenever they needed money to handle expenses from marriage, child birth or illness.

Ram Charan of Deepdi had borrowed 3,000 rupees from a money lender at the time of a religious rite. The loan shot up to 300,000 rupees in six years and Charan could not repay the amount. The lender forced Charan's entire family to work on his farm as bonded laborers. Maria freed the family, paying a portion of the debt in 2006.

She also started 150 grain banks that are now sources of additional income for the farmers. The grain banks, managed by a committee of villagers, collect quality seeds for cultivation.

Maria's works are not without troubles.

"The landlords were annoyed with me as the villagers had stopped going to work in their farms and houses," she says. The landlords ganged up to chase her out of the region, accusing her of converting the gullible poor Hindus to Christianity.

Sister Maria survived the first attempt against her in 2004 when the local panchayat head, who was impressed with her work, came to her support. But the landlords did not leave her alone.

The following year, 12 members of a right-wing Hindu armed group barged into her office, ransacked it and took away files. "They also desecrated a portrait of the Sacred Heart of Jesus," Maria recalls.

In addition, the group threatened to kill her. "I was ready to become a martyr, if that was God's will," she adds.

Manoj Pal, who was then working with her as a part-timer, said the attack terrified him and that he wanted to quit the job. Maria persuaded him to stay on. "I was scared for a long time," the 31-year-old worker says.

Maria's greatest disappointment was in the local police, who she says were "hand in glove" with the Hindu activists. "They did nothing to help me," she laments.

However, the nun has won several admirers.

"Sister Maria has taught the poor how to lead a decent life," Vishnu Vishwakarma, a member of the District Panchayat, Bhopal, told GSR. "Before she reached the area it was very backward. But today women are so much empowered that they can take care of the family on their own."

Divine Word Fr. George Payattikattu, a social worker in the region, says the nun has restored human dignity to the poor and strengthened them economically and socially.

Archbishop Leo Cornelio of Bhopal, head of the Catholic church in Madhya Pradesh, says Sister Maria finds happiness in serving the poor. "It is not easy to live in remote villages without basic facilities for such a long time. It shows her real commitment to the poor," the prelate said.

Maria's former provincial, Sr. M. Regis, says the social worker nun has changed the mindset of the congregation that was earlier focused only on education. Now many nuns have followed her lead and taken up social work, she says. 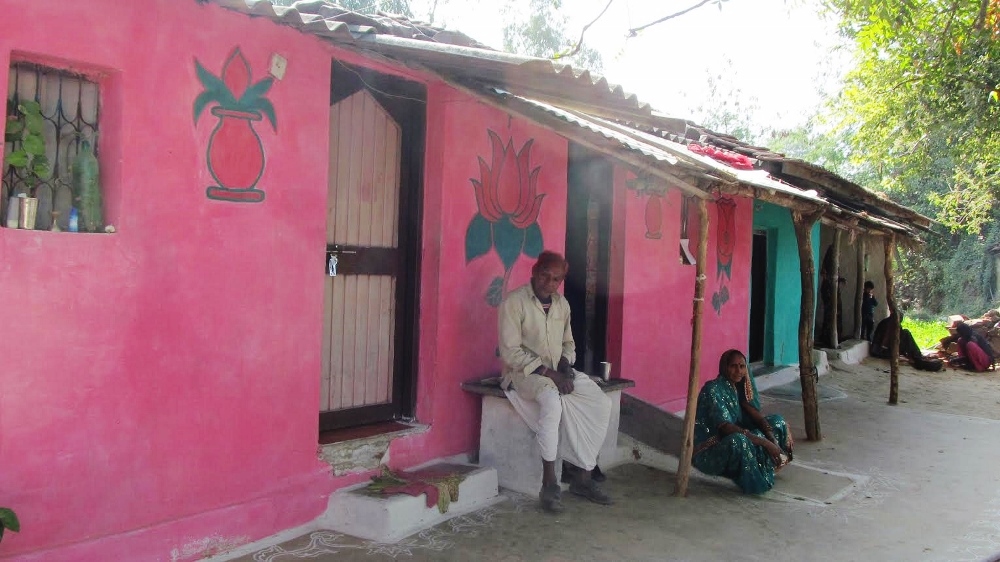 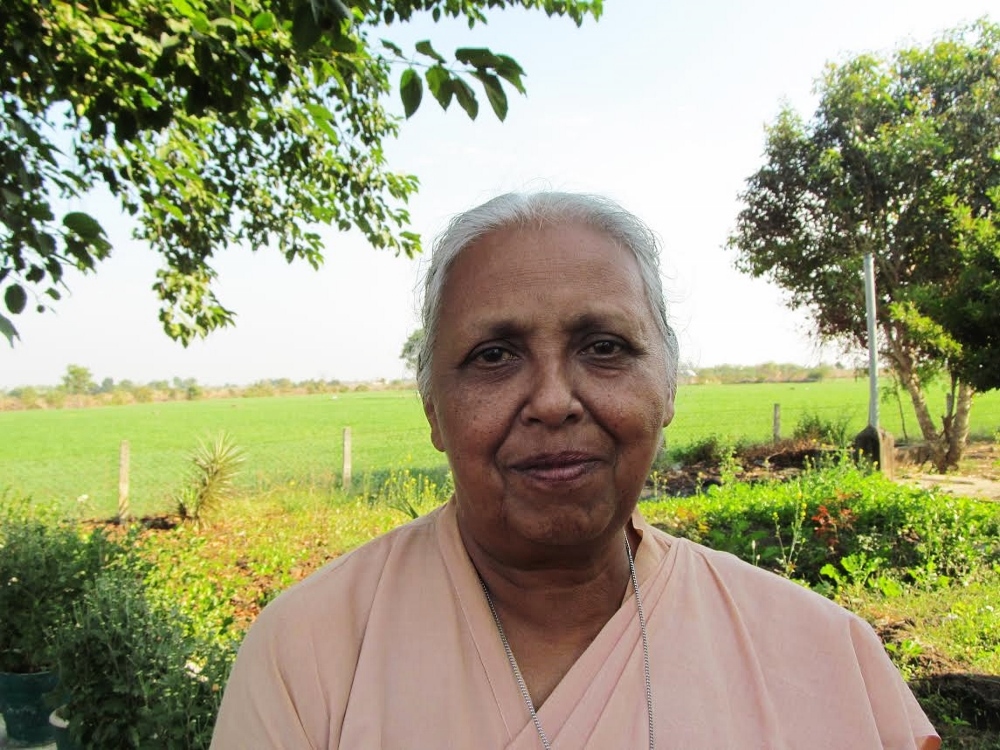 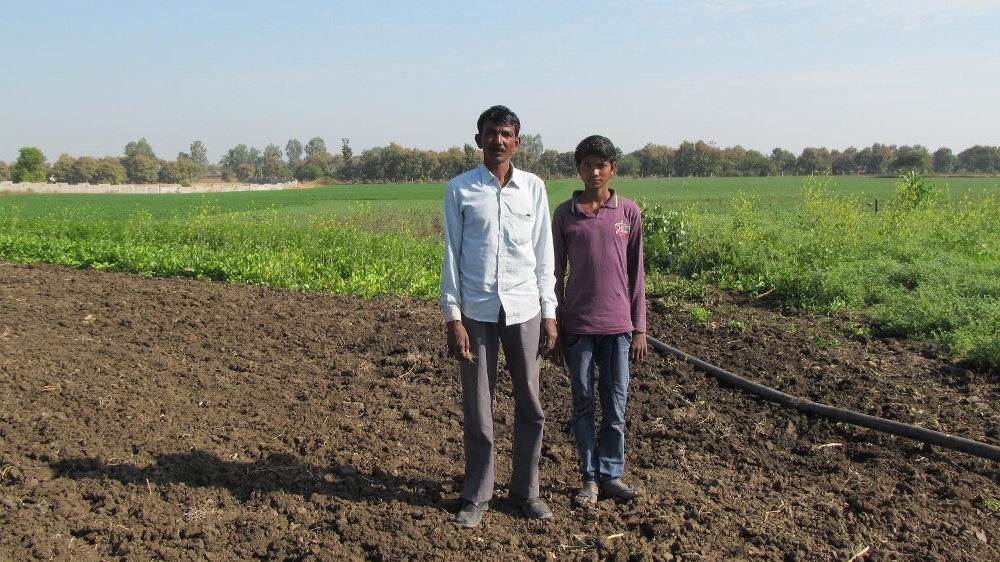 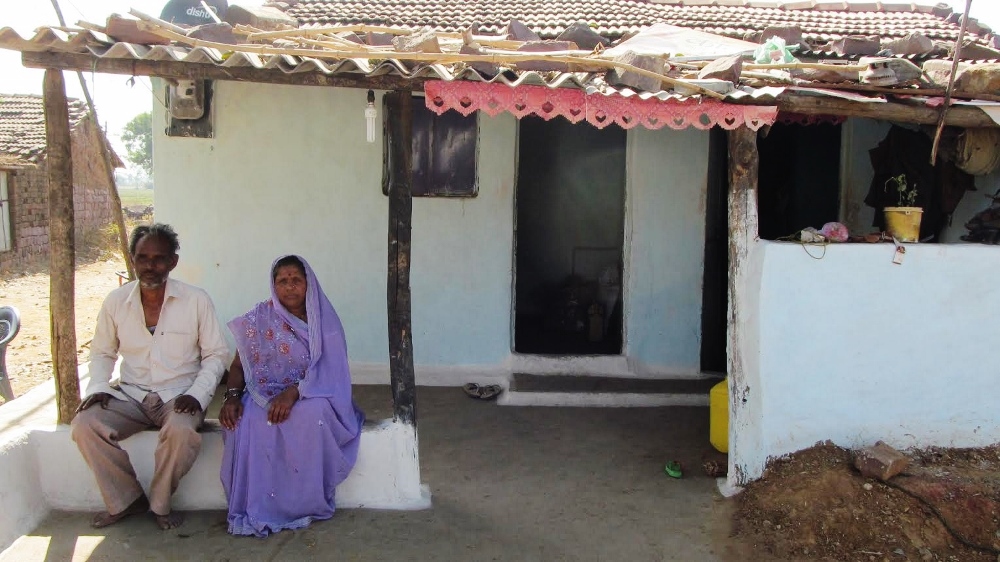 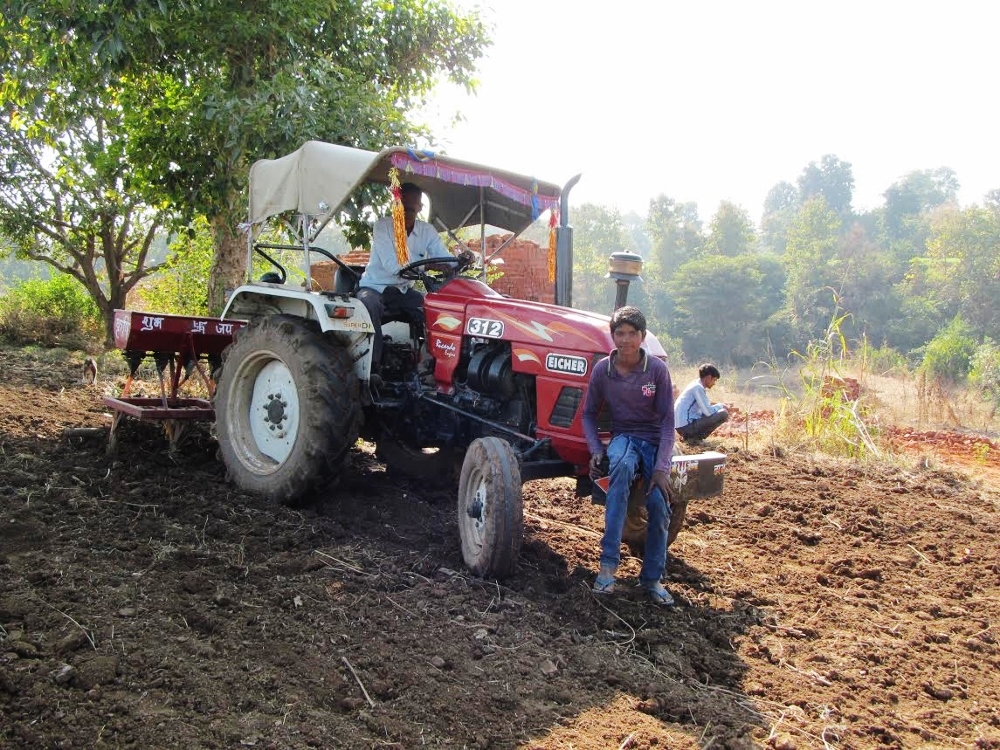 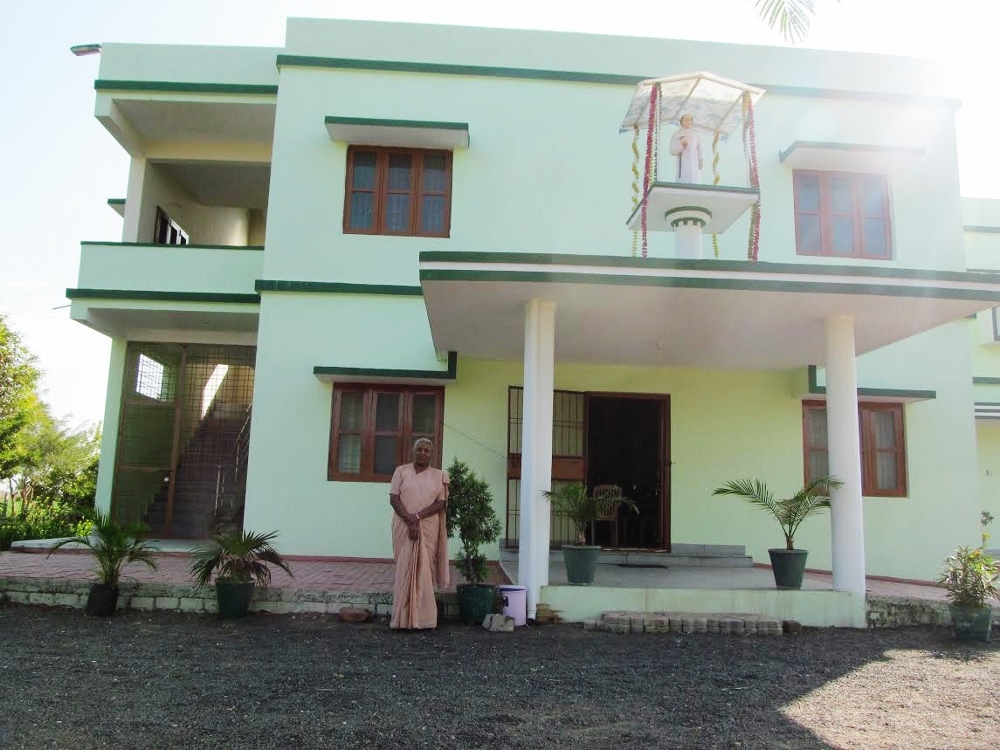