Sisterhood is global, high school girls learn at the U.N.

• The United Nations Commission on the Status of Women was established in 1946.

• A young Mozambique speaker tells how safety issues impede education for girls in her land. 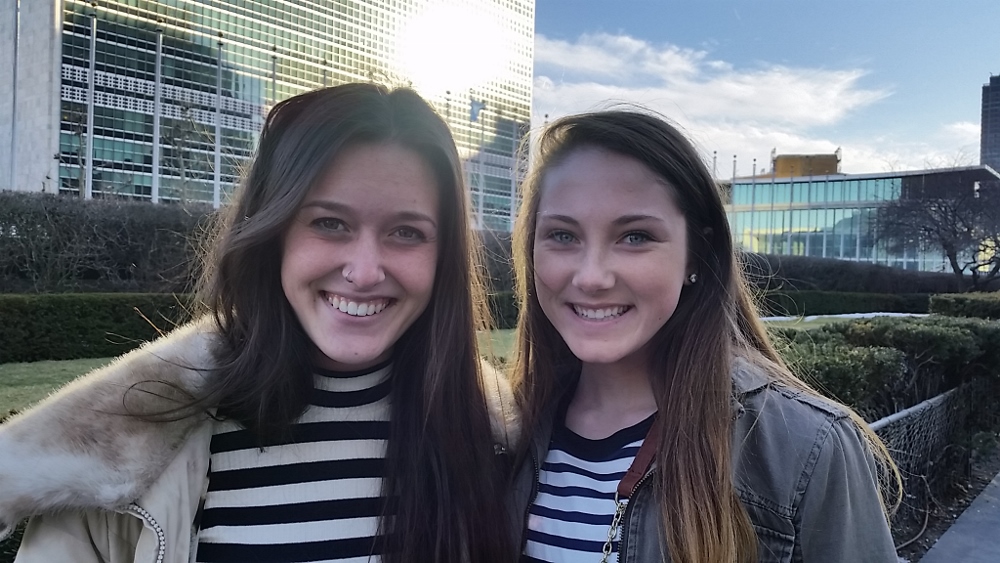 New York, N.Y. — For visitors like Micayla Wilson, it was an embrace of sisterhood. Universal sisterhood.

“We’re thinking about the same cause and sharing a common focus,” Wilson, 17, a student at the Institute of Notre Dame, a Roman Catholic girls high school in Baltimore, said of the experiences she and hundreds of young women from throughout the world shared at the United Nations recently.

The focus? Marking the accomplishments, and noting the continued challenges, of women in the two decades since the 1995 Beijing Declaration and Platform for Action, from the Beijing World Conference on Women. The U.N. Commission on the Status of Women was established by resolution in 1946.

Catholic schools with ties to a variety of religious congregations were well represented during both the March 9-20 conference – often referred to by the acronym CSW – and during a parallel event known as the NGO CSW Forum.

Between them, the two events hosted topical presentations from a variety of women’s groups, including Catholic sisters whose work is trying to improve the status of women throughout the world.

Underline that word “compassionate.” What Ortiz heard and saw at the U.N. sessions connected with her high school course work in Catholic social teaching. “Women’s rights are human rights,” she said.

The struggles for women’s rights are also part of larger narratives and problems. One speaker who made a particular impression on Ortiz was a girl from Mozambique who attends school in a violent, insecure environment. That impedes education for all, but particularly girls. “How are we going to get students to feel safe when [such] places are filled with violence?” she asked. 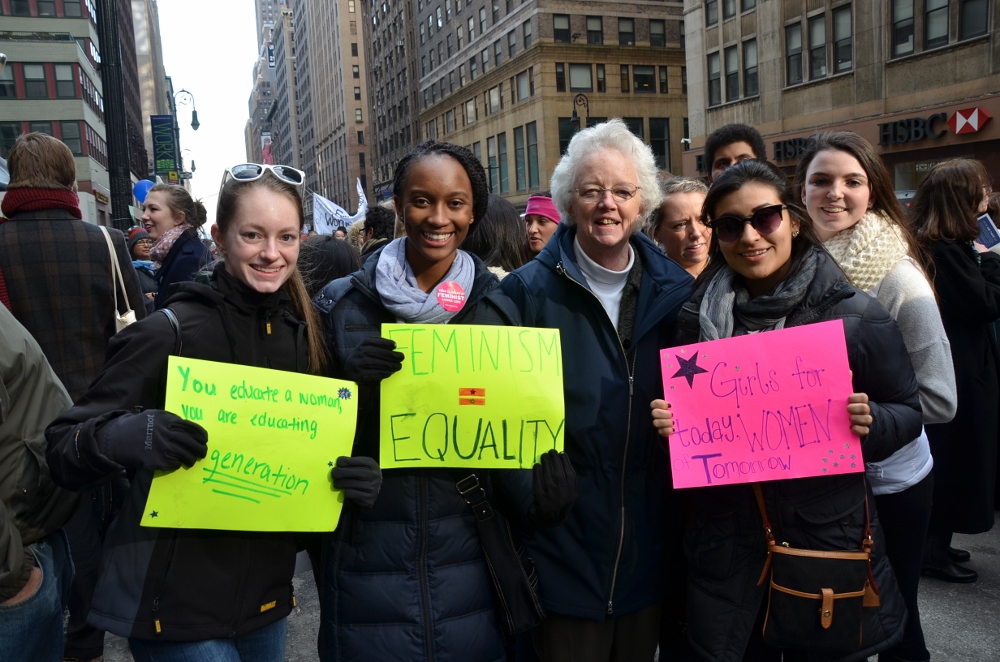 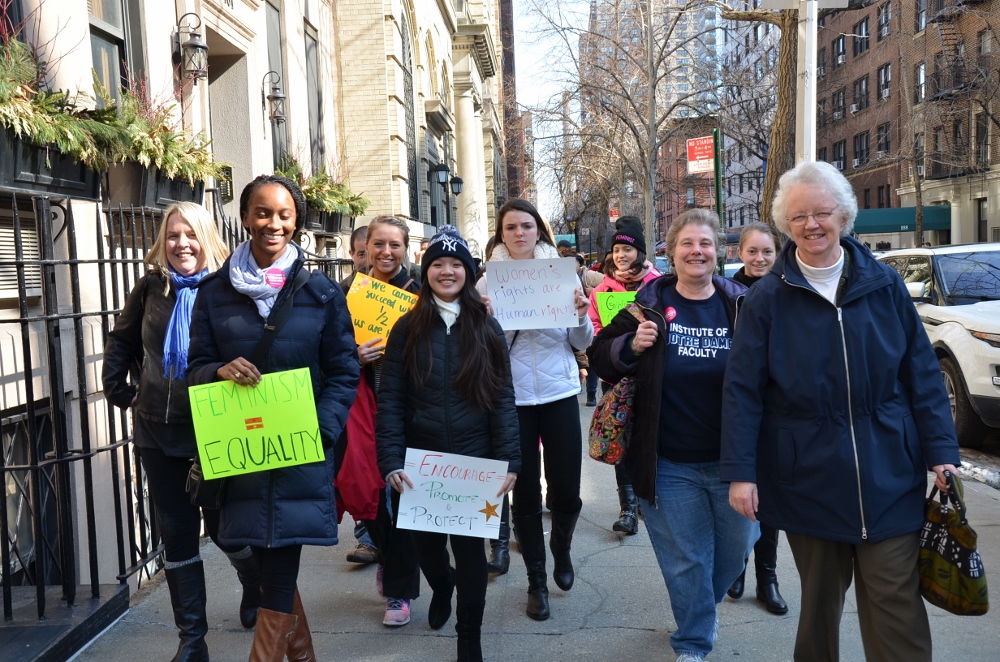 Taking up that theme, Eileen Reilly, the School Sisters of Notre Dame’s representative at the United Nations, said the issue of violence directly touches on how girls throughout much of the world can succeed – or fail. If a school does not have sanitary facilities for girls, or if a walk to school is not safe and secure, how can girls become educated, she asked.

“If we don’t take care of this issue for girls, girls will never get an education,” Reilly said. And that continues a downward cycle. But for those who are educated and later become mothers, life becomes infinitely better – not only for themselves but for their children.

Events like the conference are a high mark in the order’s 20-plus-year presence at the United Nations, as are ongoing visits by other educational groups. “It’s my job to bring my constituency to the U.N., and to bring the U.N. to my constituency,” Reilly said.

Though it is always hard to determine how a week or two at the United Nations can affect young lives, both Wilson and Ortiz say the experience has deepened their commitment to a life of service. Both mention careers in the realm of global health – Wilson would like to merge interests in international affairs with medicine, while Ortiz wants to focus on women’s health.

One lingering thought from the week for Wilson? “Don’t fit into the paradigm,” she recalls one speaker saying. “Change the paradigm.” 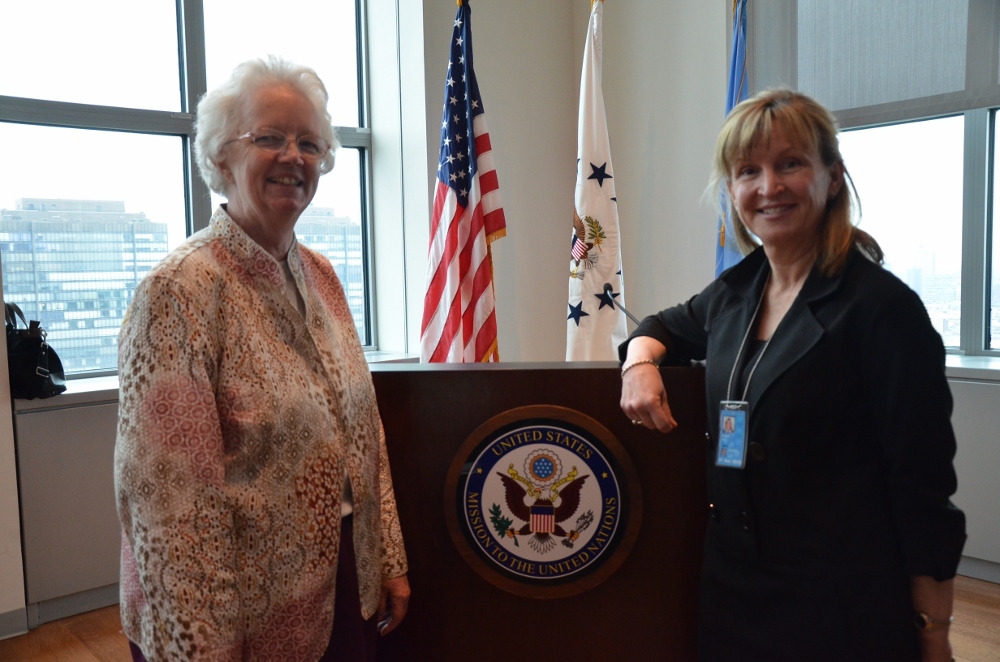 Sr. Eileen Reilly and Erica Higbie, co-chairs of the Advocacy Task Force of the Working Group on Girls, worked to get language naming girls into the political declaration. (Courtesy of SSND Communications)

Such a declaration was second nature to other visitors – six students from Nerinx Hall High School, a Roman Catholic girls school founded by the Loretto Sisters and located in the St. Louis, Missouri, suburb of Webster Groves.

To senior Audrey Lodes, 18, and junior Abby Lieser, 16, the time spent in New York confirmed their course of interests. Lieser, for example, is interested in the field of women and the media. Lodes, meanwhile, is focused on traveling in India and hopes to study international relations at the University of San Francisco, a Jesuit institution. Art therapy is a field that intrigues her and is already part of her life as a volunteer at a local St. Louis hospital.

To Lodes, “just being in the same room with so many other women was humbling. It makes you feel part of something bigger.”

At the United Nations, “the world is one room.”

“It’s eye-opening,” she added. “Where you live shouldn’t define what you care about.” Nor should it cut you off from the lives of others elsewhere in the world. “Women’s struggles are our struggles,” Lodes said. “We should look out for our sisters.”

Rubbing elbows with those from countries where female genital mutilation is a norm, “is like a wakeup call,” Lieser said.

Like her School Sisters of Notre Dame’s counterpart, Loretto Community U.N. representative Sally Dunne said hosting U.N. visitors is among the most important things she does. Such immersions prove to be “life-changing experiences,” something echoed by Lodes.

“I’m just so proud to be here. It’s been one of the best weeks of my life,” she said.

It was a week rich in a diversity of classes, races and nationalities. And yet Lieser noted a shared characteristic. 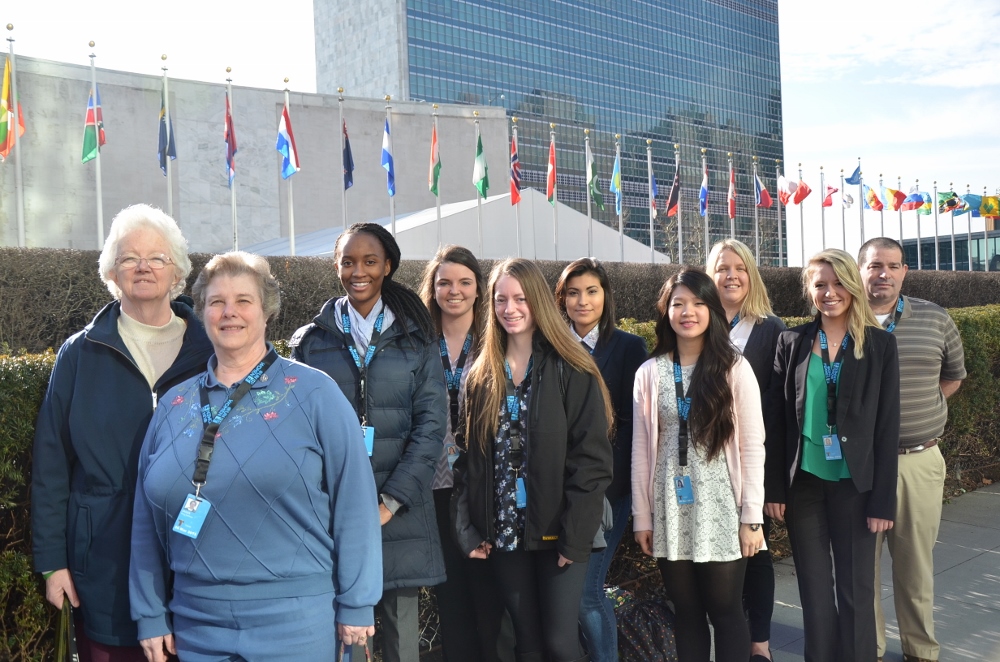 [Chris Herlinger is a contributing writer to Global Sisters Report and NCR, an author and senior writer for the humanitarian agency Church World Service.]

Editor's note: An earlier version of this story misstated the founding year for the U.N. Commission on the Status of Women (1946, not 1995) and also the number of years the School Sisters of Notre Dame have been involved (more than 20 years; Sr. Eileen Reilly has been going for five years).

Related: At the heart of the matter: Women religious at the United Nations by Chris Herlinger

Sisterhood is global, high school girls learn at the U.N.