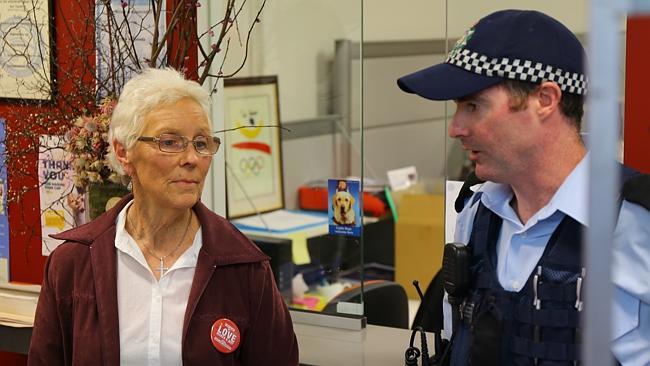 Sr. Jane Keogh was arrested in Canberra, Australia, for peacefully protesting inside a senator's office over the way the government has treated immigrant children held in detention. (Tumblr)

In a light news week, the disappearance of a young sister visiting a convent in New York City has grabbed my attention.

Another national story that ran in many newspapers, including the Times-Leader in Wilkes-Barre, Pa., concerned a woman religious in western Pennsylvania who forgave her rapist this week.

She did not appear in the Pennsylvania courtroom when a judge sentenced Andrew Bullock, 19, to prison for 18.5- 37 years.

She was 85 in December 2013 when Bullock violently attacked her at a recycling station in a church parking lot.

Bullock, who was 18 at the time, beat her so badly that she had to use a pen and paper to communicate with police after the attack. She sent a colleague to court this week to read a statement on her behalf.

“You, Andrew, are my brother, and you, like me, are a beloved child of our heavenly Father God. And our Father asks of his children to love one another and forgive one another. And, this I do, Andrew, by God’s merciful grace.

“My profound and permanent prayer for you, Andrew, is that you wholeheartedly take advantage of the educational, uplifting, socially positive opportunities that may be available during your prison time.”

Other cheek? Turned, with grace.

New York media, including the Daily News, covered the disappearance more than two weeks ago of Tadelech Yohanis, 30, an Ethiopian woman religious last seen at Sacred Heart Convent on the city’s Lower East Side.

And she’s apparently still missing. I find no reports saying that she is safe.

New York police do not believe that Yohanis disappeared by choice. She vanished around 4 p.m. on Oct. 23 from the convent. Reports suggest that she left her passport at the convent and was scheduled to fly home three days later on Oct. 26.

She came to the United States on Oct. 6, a trip that was reportedly a prize for service in her home country.

“We're concerned about the sister and we’re working with the local police on this matter,” a receptionist at the convent told The Huffington Post a few days ago.

Yohanis is described as 5-feet-9, 150 pounds, with black hair and brown eyes. Anyone with information about her whereabouts should call NYPD Crime Stoppers, 800-577-8477 or go online at nypdcrimestoppers.com.

Go ahead, make her day

We all know one or two, probably more, women religious who could be described as – dare we say it? – gutsy.

News.com.au in Australia reports that when federal police officers in the capital city of Canberra arrested Keogh at a peaceful protest this week, she was prepared for extreme measures.

“I was thinking if I was charged and they offered me bail, I would say ‘could I go to jail instead?’” she told the news agency.

Keogh and four other protesters were arrested as they held a prayer vigil inside a senator’s office to protest the government’s treatment of immigrant children being held in detention. Keogh has been working with refugees seeking asylum in Australia for a dozen years.

“I understand the trauma that children experience. I feel desperate. Sometimes I wake at night crying because I’m so upset,” she said. “I’m prepared to do anything.”

More protests are planned, and Keogh is ready.

“Most people don’t want a criminal conviction, but if I go to jail for six months, I’m at an age that my job doesn’t depend on it,” she said. “I’ve got people who look after my dogs.”

You just never know how people are going to recall their Catholic-school days, especially when the person talking is a comedian.

I guess that’s why I found this quote from comedian Kathleen Madigan so refreshing. Newsday interviewed her last week ahead of a performance on Long Island. Madigan grew up in Missouri as the middle child in an Irish-Catholic family of seven.

Newsday asked: Did going to Catholic school help keep you in check?

“It made me not cross certain lines. Even if nobody was watching, God was watching,” she said. “The fear of God helped me not do bad things. Every single day in Catholic school, a nun would write on the board: 1.) God, 2.) Others, 3.) Yourself – then say, ‘Remember that order. That's how you live.’

“When you see that every single day for eight years, it becomes a moral code that’s installed inside of you.”