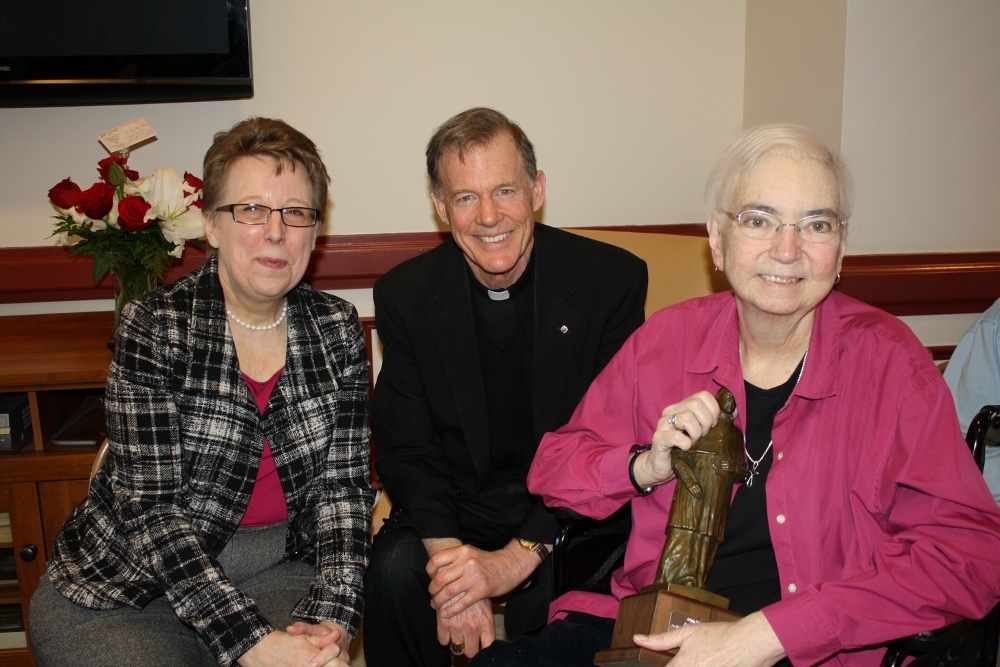 Helen Osman, from the USCCB, Bishop John Charles Wester, Honorary President of the Catholic Press Association sit with Sr. Mary Ann Walsh, right, who accepted the Catholic Press Assocation’s St. Francis de Sales Award for journalism March 12 at the Sisters of Mercy motherhouse in Albany, N.Y. (Courtesy of the Institute of the Sisters of Mercy of the Americas)

Albany, N.Y. — Mercy Sr. Mary Ann Walsh was surprised at her home at the Sisters of Mercy motherhouse in Albany March 12 when visitors presented her with the Catholic Press Association's St. Francis de Sales Award.

"Her life of service to the Catholic press, the USCCB and the church is outstanding and a model for all," said Rob DeFrancesco, president of the CPA and associate publisher of the Catholic Sun in the Diocese of Phoenix, in explaining the decision to bestow the award.

Walsh, the U.S. church correspondent for America magazine, stepped down last summer as director of media relations for the U.S. Conference of Catholic Bishops.

"What a great honor," Walsh said in a note to Catholic News Service. "Once I moved from journalism to media relations, I thought such an honor was out of reach. I love the Catholic Press Association and the writing world. I am a writer at heart."

She previously had been media editor and a Vatican correspondent for Catholic News Service and a reporter for The Evangelist, newspaper of the Diocese of Albany, her hometown. She also has edited several books, produced two videos, written commentaries or op-eds for numerous publications and appeared many times on radio and television programs.

The honor from the professional organization representing members of the Catholic news media in the U.S. and Canada was presented by Salt Lake City Bishop John C. Wester, chairman of the Committee on Communications of the USCCB, and Helen Osman, secretary of communications for the USCCB.

In presenting Walsh with a bronze statue of the patron saint of journalists, Bishop Wester quoted St. Francis, saying "nothing is so strong as gentleness, nothing so gentle as real strength."

DeFrancesco said the CPA board was unanimous in deciding to honor Walsh’s life and work.

"We were contacted by at least two of our members urging us to consider honoring Sr. Mary Ann Walsh with the St. Francis de Sales award," he told Catholic News Service in an email. "It was a great idea. So we forwarded this recommendation to the St. Francis de Sales committee, who then recommended that the board honor Sister Mary Ann with the award."

Osman said Walsh was totally surprised by the presentation and that the sisters who live with her at the motherhouse were pleased they could pull off a celebration in her honor without the famously well-sourced nun catching on. Members of her family, retired Albany Bishop Howard J. Hubbard and other friends were among the guests who packed the community room at the motherhouse for the presentation.

Bishop Wester and Osman already had plans to visit their friend and former colleague when the CPA decision was made, so they were asked to present the statue.

The St. Francis de Sales Award is the highest award the CPA presents to an individual for "outstanding contributions to Catholic journalism" and is normally presented during the annual Catholic Media Conference. Tim Walter, executive director of the CPA, said a second Frannie, as the award is known, would be presented as usual during this year's convention.

Walter explained that as nominations were being taken for the award, Walsh was nominated, with a recommendation that the honor be given "in a timely manner" because of the nun's declining health.

Walsh has been battling what she called an aggressive form of metastatic cancer. She has been blogging about the experience on the Sisters of Mercy website.

Walter said the CPA is proceeding with the voting process for the Frannie to be awarded according to the normal procedures during the convention, being held this year in Buffalo, New York, June 24-26.

Walter said the Frannie has been awarded outside the normal system once or twice previously. The most recent such honor was given to longtime CPA director Owen McGovern in 2006 after his retirement the previous year, Walter said. Other special recipients have included Cardinal Avery Dulles, in 2001, and Archbishop (then-Bishop) John P. Foley, in 1984.

Osman said Walsh told her she didn't think she would ever receive a Frannie "after she went to the other side of the house (from reporter to media relations). She was very happy."