Why would a Dominican Sister choose to engage in civil disobedience and get arrested for nonviolent direct action? The public spectacle of the national Catholic Day of Action for Immigrant Children, with the arrest of 70 sisters, clergy and laypeople on Capitol Hill, likely raised questions in the minds of people of faith, especially Catholics, as to what we hoped to accomplish.

My decision to participate in the Catholic Day of Action this summer was based on two sources of deep distress to me: the policies of my government and the perception of my church. I stood against my government's shameful failure to welcome the stranger and I stood for the pro-life, family values that often feel subordinated in the American Catholic vernacular.

First and foremost, I can scarcely contain my outrage at our government's demonization and inhumane treatment of immigrants. It is inconceivable that the government of a nation historically built by immigrants is now criminalizing their desperation and inflicting irreparable damage to their spirits, and in many cases to their bodies.

How does our government contend with the least of these? Families torn apart, children in cages, destitute refugees forced to "remain" where violent, criminal gangs will prey upon them. Thousands of children are being psychologically scarred for life by our government as you read this — and then there are those who have already died in custody: Darlyn Cristabel Cordova-Valle (10 years old), Jakelin Caal Maquín (7), Felipe Gómez Alonzo (8), Juan de León Gutiérrez (16), Wilmer Josué Ramírez Vásquez (2), Carlos Hernández Vásquez (16).

This administration is pushing policies that clearly violate Christian mandates to protect the most vulnerable. And these policies go beyond incompetence — there are active efforts to waive human rights and to flub basic humanitarian standards of care.

There are so many faithful Catholic operations along the border where people of goodwill are scrambling to offer support and welcome to these families. I have septuagenarian and octogenarian sisters who volunteer at the border to offer them comfort and assistance in whatever way they can. It only makes sense that I take the actions available to me on Capitol Hill to demand that Congress stop funding government-sponsored abuse and terrorism of those same people.

My choice to be arrested was a privilege — one of many privileges I enjoy as an educated, white American citizen. This low-risk gesture pales in comparison to migrants' harrowing journeys and harsh reception at the border. The respectful and considerate treatment from Capitol Police that I received was a stark contrast to the dehumanizing conditions faced by detained migrants.

The truly courageous participant was the undocumented young mother from El Salvador who addressed our group prior our arrest. As she cradled her infant, a U.S. citizen, she described her constant dread of being deported and separated from her child. She spoke out in desperation; the stakes couldn't be higher for her and her baby.

The other basis for my decision is rooted in my frustration with the perception — and reality — of the American Catholic Church vis-à-vis pro-life and "family values." The public outcry from secular and religious Americans alike was palpable when news emerged of the administration's reckless, systematic separation of families and negligent detention of children and infants.

These policies are anathema to the sanctity of family and the inviolability of innocents — values that are core to humanity. Likewise, Catholics are called to serve at the border by their pro-life and pro-family values — and by the clear mandate to welcome the stranger. Despite their diligent and faithful service, the need is too great and damage to these children and families goes deep.

In the meantime, there is another part of the church — it is more vocal, more visible and laser-focused — that is claiming paramount rights to pro-life and pro-family values. Although there are infants and toddlers right now at the border who are having their little spirits crushed by our government's policies, this cohort vehemently condemns policies about women's reproductive health on behalf of yet-to-be conceived fetuses.

Even as families are being torn apart at gunpoint and detained separately (some indefinitely lost from each other), these Catholics denounce laws that allow civil marriages for our LGBTQ sisters and brothers as "objectively disordered" and counter to family values.

The national Catholic Day of Action was, in part, a reminder to Catholics that pro-life and family values demand their attention and repudiation in other, palpable, urgent matters of policy. Our witness was, in part, a signal that Catholicism maintains a consistent life ethic rooted in humanity and love. If we as a church are going to defend life in the womb, we need to defend the lives in detention at the border. If we are going to be authentic to our claim to value families, we need to call for the reunification of immigrant families.

I think of my church as a both/and institution that allows for great variety and scope — the reach of the Catholic Church across time and space is hard to fathom. Part of what appeals to me is the richness of that history and the complexity of the tradition. The Catholic Church that exists today feels expansive and spacious, with ample room for inquiry and debate.

I am not blind, however, to the deepening rift within the church in the U.S. It mirrors the polarized ugliness of our country's political system but, for me, cuts even deeper to the bone.

The act of civil disobedience on the Catholic Day of Action was a first for me. I chose to do it in such a visible manner in order to challenge people of conscience and especially Catholics. As a Catholic sister on Capitol Hill under the Trump administration, I will continue to embrace the "both/and-ness" of my tradition. As a member of a progressive congregation of women religious, I wore my habit as a visible witness against this administration's assault on pro-life and pro-family values at our southern border. I lobby the halls of Congress to push for systemic change from within and I risk arrest in those same halls to resist the unjust system as it stands.

I've asked myself many times over the past two years: How bad has the national political climate become, really? It can be difficult to gauge when you're on a slippery slope. I pray that the image of my arrest provides affirmation (to anyone who needs it) that we have, in fact, reached that point. Expressing regret or misgivings or concern no longer suffices for the harm that our government is doing at the border — and to immigrant families across the country.

That photo of Óscar Alberto Martínez Ramírez and Valeria, the drowned father and daughter, haunts us precisely because it is unacceptable. As people of conscience, we cannot stifle the outrage or we will rot from the inside. These affronts to life and family are, after all, taxpayer-funded.

Contact your representatives to push them on what they're doing to stop the inhumanity. Share your concerns with your friends and family — imagine yourselves and your loved ones in the migrant's situation. Organize with your fellow parishioners to lend aid to service and advocacy groups. Express your outrage loudly and clearly so that others hear.

The outcry from the Catholic community will continue. In early September, a coalition of Catholic sisters, priests, brothers, lay Catholic advocates and immigrants were blessed by Cardinal Joseph Tobin in Newark, New Jersey, prior to engaging in nonviolent civil disobedience at the ICE office of the Federal Building.

How is your faith calling you to support pro-life and family values — for immigrants?

[Quincy Howard is a Dominican Sister of Sinsinawa, Wisconsin. After a career in urban planning and disaster recovery, she ministers on Capitol Hill as a federal policy advocate for social justice.] 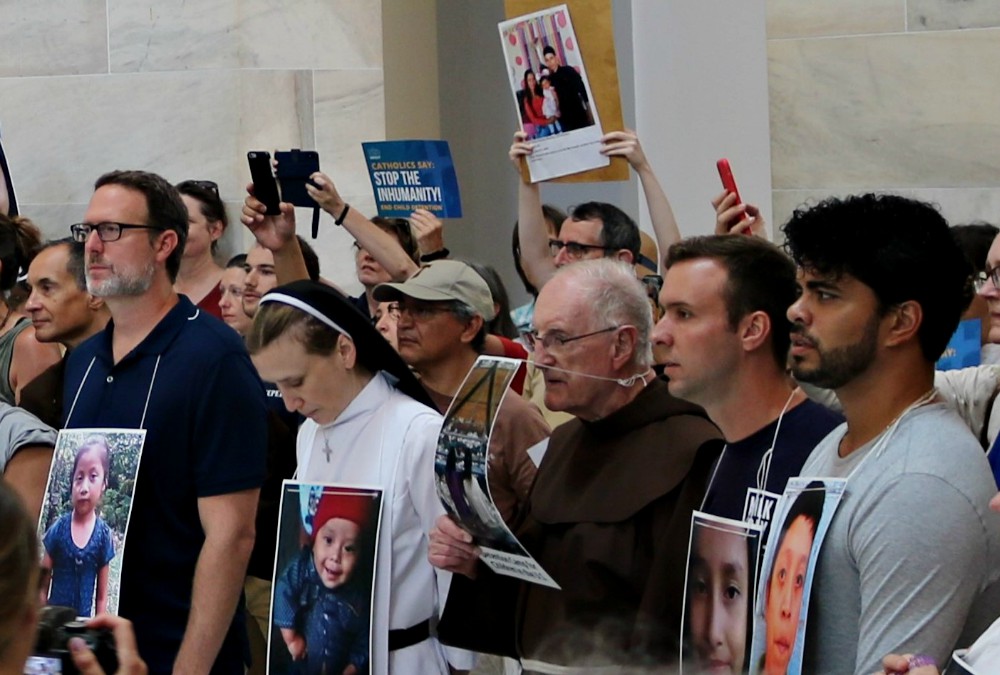 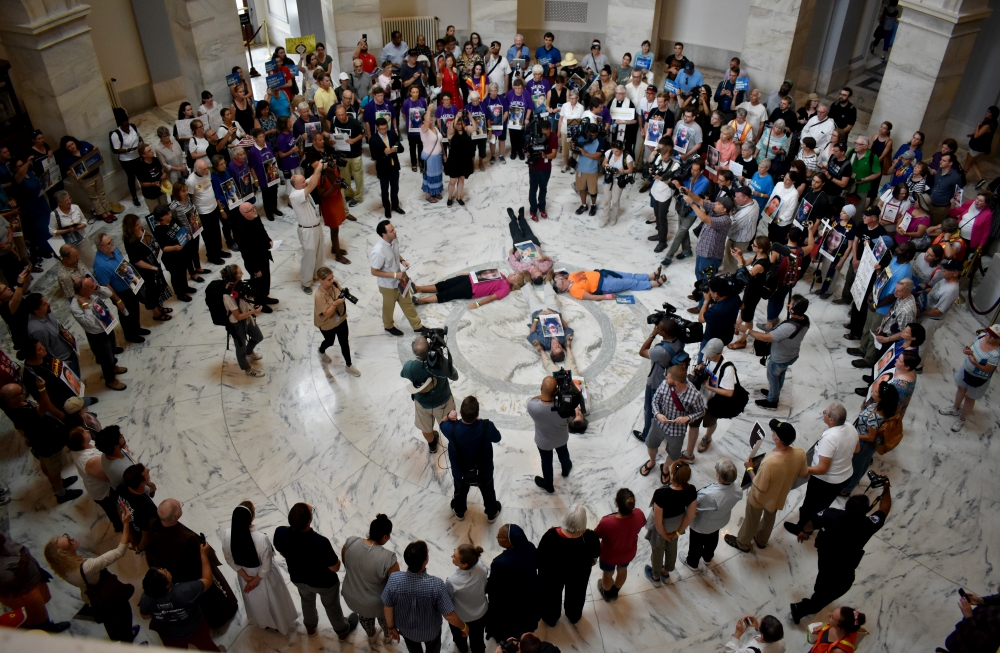 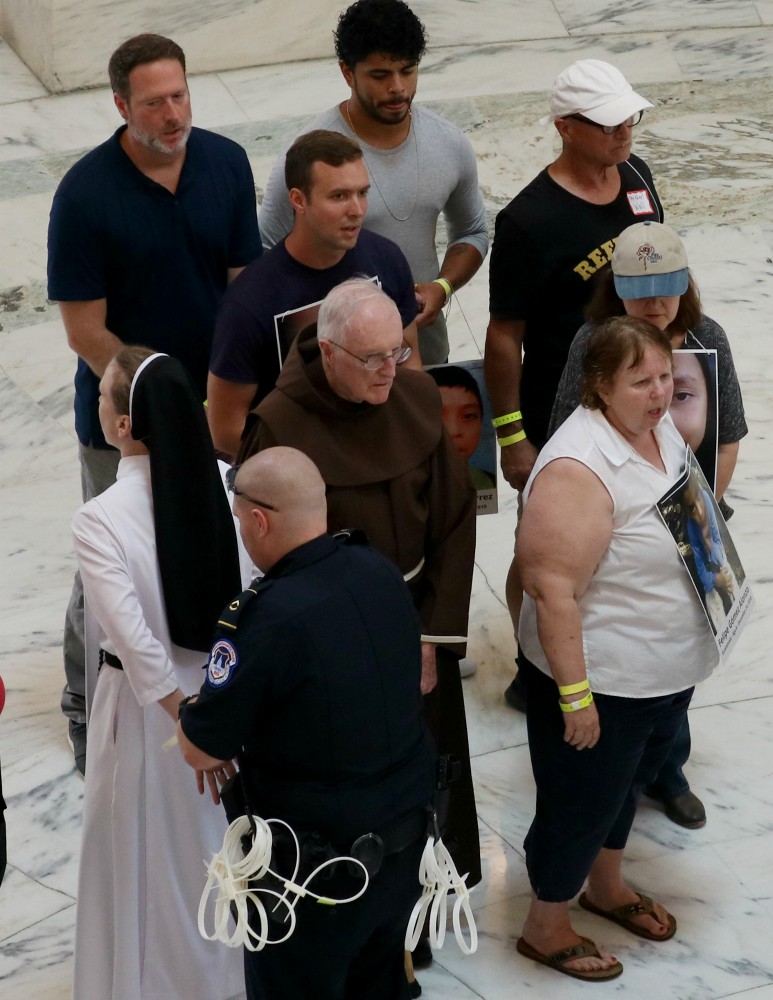