Liliana Gomez is just the kind of person the organizers of the National Catholic Sisters Week conference on discernment hoped to attract: passionate about her faith and social justice, and open to the idea of religious life as a future path.

The first-year student at St. Mary’s University, Winona, Minnesota, grew up with two younger sisters in a Catholic family in suburban Minneapolis. She describes herself as “super passionate” about her faith and about issues such as immigration and immigrants’ rights. She intends to major in elementary education, volunteers with at-risk children and serves on her college’s peace and justice committee.

Gomez has even talked with her parents about her options and says they’re supportive of the idea that she could become a sister. Still, like many of her peers, she also imagines having a family and “a normal job.”

“A dog, the kids in the backyard,” she said.

“I’m discerning discerning, if that makes sense,” she said. “If I had two lifetimes I would totally do both.”

Gomez was one of about 60 students and sisters who attended the National Catholic Sisters Week kickoff conference March 6-8 at St. Catherine University in St. Paul, Minnesota. Its theme of discernment seems tailor-made for her, with its focus on learning how to negotiate a direction when two paths are equally attractive.

Though attendance was only about half that of last year’s inaugural conference, organizer Molly Hazelton didn’t mind.

“The point was to be smaller and more intimate. Having 60 actually made it so people could connect easier,” said Hazelton who co-leads, with Adrian Dominican Sister Mary Soher, the project housed on the college’s campus. Funded by a grant from the Conrad N. Hilton Foundation, National Catholic Sisters Week honors women religious and is held in conjunction with National Women’s Historory Month. (Global Sisters Report also receives funding from the Hilton foundation.)

The weekend vibe could be summed up in a sentence from presenter Sister of Saints Cyril and Methodius Deborah Borneman in her session called “Discernment: How will I really know it’s God calling?”

“Religious life is not about numbers but relationships,” she said.

That theme was reinforced and affirmed as participants delved into learning and reflection about the steps of the discernment process, shared meals and took selfies, talked in large and small groups and in pairs.

Unlike Gomez, Samantha Bissell, a senior sociology major at Emmanuel College in Boston, doesn’t have a religious affiliation and isn’t considering sisterhood. She came with Sister of Notre Dame de Namur Bárbara Gutierrez, who is in campus ministry there.

“I just came because I love the sisters who work at my school,” Samantha said.

Samantha is committed to the sisters’ core values of goodness, service, tradition, education, community and leadership and mission. She is president of Emmanuel College’s 1804 Society, a leadership organization that aims to carry the sisters’ values forward and make their mission relevant to students today.

“[The sisters of Notre Dame de Namur] are some of the most tireless and fearless advocates for social justice and equality. For me, that’s what matters. I see myself as being more of an advocate for their values in the bigger world,” said Samantha.

An example of that “tireless and fearless” spirit was portrayed at the conference by Dominican Sister Nancy Murray, who performed the one-woman show “Rooted in Love,” about the life of Dorothy Stang, a Sister of Notre Dame de Namur, who was killed 10 years ago by opponents of her lifelong political activism with poor farmers and against massive deforestation in rural Brazil.

It’s hard to know who in the room is truly discerning religious life, said Hazelton, but the tools and process aren’t just for them. Instead, the way women religious typically operate is good for everyone, whatever choices they face.

“We put the weekend together with the idea that sisters are so good at making conscious decisions that others could learn about wise decision-making from them,” Hazelton said.

Ideas and tips about the discernment process were seeded throughout the conference. Borneman laid out the steps involved: call, awakening, answers, action.

Unfortunately, she said, there are often more questions than answers, especially early in the process. She said discernment is more than making a pros and cons list, and she encouraged women interested in religious life to seek out someone to talk to.

Borneman also touched on the countercultural nature of religious life, especially the tension many North Americans may feel between predominant consumerism and the prospect of living simply and in community.

“The pursuit of happiness is in our Constitution. It’s not in the Gospel,” she reminded the group. “God calls us to holiness first; happiness can be a result of holiness.”

The audience welcomed such honesty and appreciated time for shared reflection and private conversations to further explore these themes.

“People kept telling me how meaningful it was to them. That, for me, was rewarding. This was our first time dabbling in this intentional, thought-provoking work,” Hazelton said.

Liliana Gomez said she learned from Borneman’s talk to “watch for signs” that she might be called to religious life, “but don’t overanalyze.” She plans to seek out a vocation director or spiritual director as she continues to consider her future.

Even finding a supportive online community can help. During a session on theology for social media, Immaculate Heart of Mary Sister Maxine Kollasch shared stories of how A Nun’s Life, their online and social media ministry, has fostered connections among women and men interested in faith, vocation and making life choices. A sister sitting in the audience said a woman who had recently joined her community cited A Nun’s Life members and staff as helping guide her decision.

For Jackie Salas, making a one-year commitment to the St. Joseph Worker program has been a way to taste life in community and to live the charism of the Sisters of St. Joseph of Carondelet without making a full-on plunge.

Salas graduated last year from Boston’s Regis College. She works with the sisters’ justice office and lives in community with four other women also in the program, which offers housing, a stipend, health insurance and community life in exchange for a year of service.

Salas first learned of the opportunity when she picked up a brochure at last year’s conference.

“I’m not in formation, I’m not a novice, but I’m living like one,” she said, “simply and sustainably and in community.”

She likes living with other women her age with whom she can share pain and joy, such as during a recent experience together, when they spent a day on the streets of Minneapolis with limited resources to better understand people who do only have limited resources.

Salas said she and her fellow workers joke that they are “the ‘little’ sisters,” and while she is not claiming she’ll enter religious life, she’s not saying she won’t.

“Sisters are just women,” Salas said. “There isn’t this Great Wall of China between what sisters are and ‘normal’ people.”

For now, she is considering a second year in the program, possibly in another state or in a different job.

More photos of the conference can be seen on the NCSW Flickr page here. 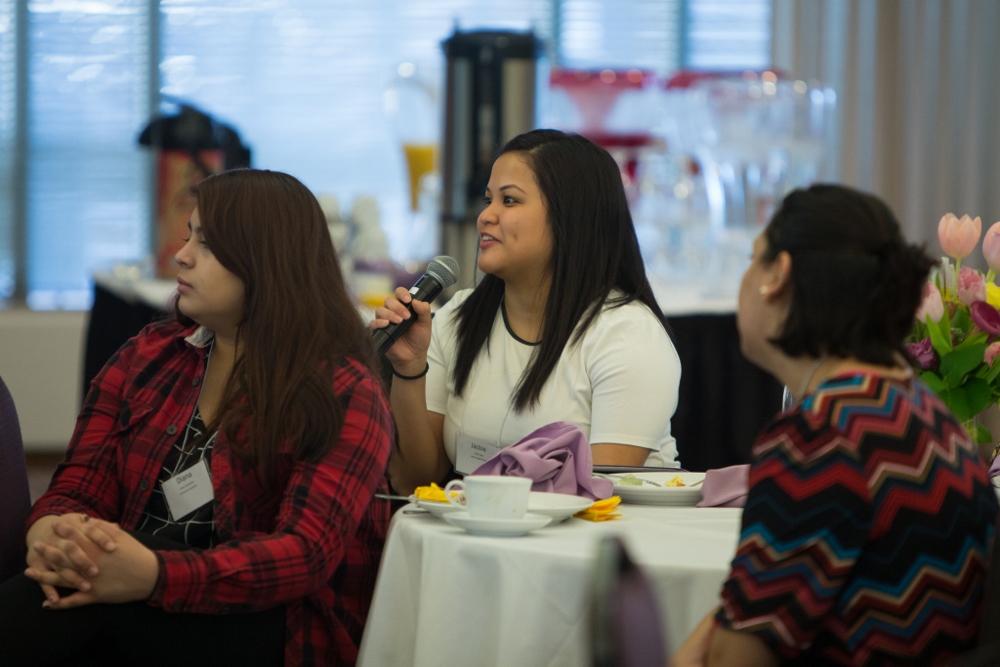 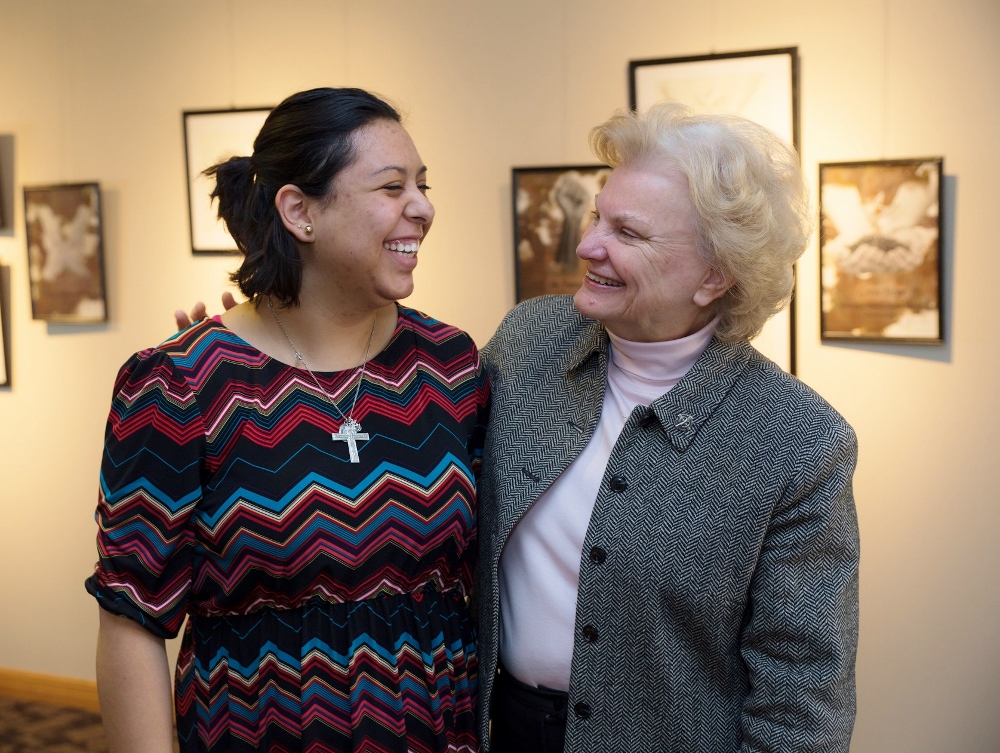 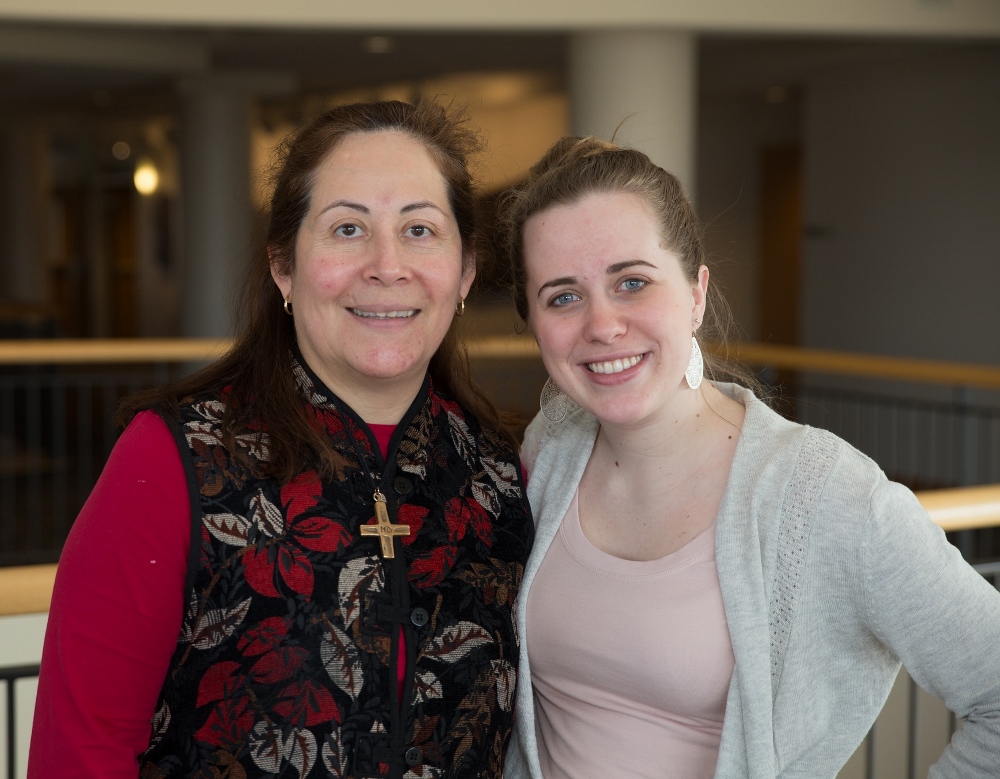