When the world commemorates the United Nations' World Day against Trafficking in Persons on July 30, it will focus on crimes the global body says exploit "women, children and men for numerous purposes including forced labor and sex."

It will also serve as a reminder that international efforts to stop human trafficking are gaining visibility, attention and support throughout the world.

Though there is not a ground zero for such efforts, the fact that the United Nations passed a resolution in December 2013 marking July 30 as an annual international day to focus on trafficking makes the global body an important ally and even clearinghouse for the campaign against human trafficking.

But the efforts don't begin or end there.

And in rural Canada, Grandmother Isabelle Meawasige, an elder of the Serpent River First Nation, is working with other elder women to stop human trafficking and sexual exploitation among indigenous communities. The 12 elders from Ontario's North Shore, Manitoulin Island and Sault Ste. Marie make up the Grandmothers Council, or Kii Ga Do Waak Nookimissuk in Ojibway.

"It's like we're living a war up here," said Meawasige, who appeared at the United Nations' annual forum on indigenous issues in late April at the invitation of Canadian Sr. Sheila Smith, the U.N. representative for the Society of the Sacred Heart.

Smith's ministry includes more than a decade of working with First Nations communities in rural Canada, and she was co-founder of Persons Against the Crime of Trafficking in Humans, or PACT, which is based in Ottawa.

Meawasige and the other elders have developed a set of resources, "Grandmothers Pact," that is shared among First Nations in public presentations against human trafficking and sexual exploitation among native communities.

In an interview with Global Sisters Report, Meawasige said the linked issues of trafficking and sexual exploitation are real and costly for First Nation peoples. Meawasige called First Nation girls and young women particularly vulnerable to trafficking, exploitation or "grooming" because of widespread economic poverty and the lure of a better life.

"These young ladies would like to have those high-class running shoes, the beautiful clothes and makeup," she said. "That makes them vulnerable to that person [the trafficker]. He can sell them that dream."

That's not a surprise to sisters representing their congregations at the United Nations who have long argued that trafficking and sexual exploitation are the results of complex factors, with poverty being one cornerstone.

But the issue goes beyond that, they say: It symbolizes numerous systems of injustice.

"Human trafficking is a serious crime and a grave violation of human rights," said Sr. Winifred Doherty, the U.N. representative of the Congregation of Our Lady of Charity of the Good Shepherd, during a June 26 conference on human trafficking on Capitol Hill.

She noted that human trafficking "is driven by market forces of demand and supply, whether for sexual exploitation or labor exploitation or organ removal or forced marriage."

Any economic system that allows human trafficking is wrong and needs to be changed, she said.

"An exploitative, consumerist economy is the antithesis of human rights and human dignity," Doherty said. "We are all complicit, and we must all act to combat it in consistent and holistic ways."

U.S. Catholic Sisters Against Trafficking estimates that there are up to 30 million people being trafficked today globally. A report released in January by the United Nations Office on Drugs and Crime showed a record number of trafficking cases in 2016, the latest year figures are available. That number was over 25,000; in 2003, 20,000 cases were reported, the U.N. body said.

The record-high rates of conviction and detection "could either be a sign that countries have strengthened their capacity to identify victims — such as through specific legislation, better coordination among law enforcement entities, and improved victim protection services — or, that the number of actual instances of trafficking has increased," the U.N. reported.

Doherty and other sisters know, given the visibility of the United Nations, they are in a good position to advocate on behalf of trafficking survivors and victims. A number of congregations as well as the Holy See and agencies such as the U.S. Agency for International Development, or USAID, plan events at the U.N. to mark the World Day against Trafficking in Persons.

But the sisters are also clear that efforts against trafficking go beyond a single day's commemoration.

"Change takes a long, long time," said Australian Mercy Sr. Angela Reed, who represents Mercy International Association / Mercy Global Action at the United Nations and who helped author a 2018 Mercy advocacy guidebook about human trafficking. "It's a long, slow slog. It takes a long time for the narrative to change."

She and others, including Smith, say the world's nations are taking too narrow a view of solutions to human trafficking if they are solely focused on the "supply chains" of trafficking.

Neither Reed nor Smith denies the importance of efforts to curtail the demand for labor or sex that fuels the supply of trafficked humans. But they also argue that nations must do more to get at the root causes of human trafficking: poverty and systematic discrimination that lead to social vulnerabilities, particularly for young women and girls.

"We can't address the problem of trafficking until we address the issue of violations of human rights," said Reed, who is an advocate for what she calls Optimal Life Course Conditions. Those include such factors as education, adequate standard of living, gender equality and safety that, if in place, could reduce the vulnerability to trafficking for girls and young women.

"Prevention is not a very popular response to trafficking [by the countries] because it's long-term, it's an investment, it's not a quick fix," she said. But in the end, she said, the embrace of national and local policies to improve social and economic conditions, as exemplified in the U.N.'s 17 sustainable development goals, are the best way to get at root causes and end trafficking, Reed said.

Given her experiences in rural Canada, Smith knows much about root causes. Smith said traffickers target indigenous peoples in Canada and elsewhere in the world because traffickers know indigenous communities are particularly vulnerable to lures of what are called "good jobs" but are actually channels to exploitation.

Meawasige and other elders meet young people at pow-wows and other gatherings and try to convey a sense of cultural pride that may help young people, particularly young women, see a life beyond what traffickers may offer.

"We are living transmitters of our culture," she said. "People actually listen to what the grandmothers are saying."

The #MeToo movement has also encouraged Meawasige and her fellow elders.

"It's not going to go on," she said of sexism and sexual violence that deeply affect the women of First Nation communities. Women of such communities are increasingly aware of male-dominated abuse and power.

"These things are hurting our people," she said. "It's like we have a target on our backs."

She added: "We are living in a war zone with indigenous women, girls, youth and two-spirit [third-gender] people being targeted all across Canada."

The lived experiences of trafficking survivors, Reed said, lends credibility to her belief that it is rarely true (though not impossible) "that anyone can be trafficked."

In her own research of trafficked Filipino women, Reed said "not a single survivor didn't experience some kind of stigmatization early in life."

That is not saying growing up in economically impoverished conditions will lead to being trafficked, Reed said. But it does mean that a "human-rights-based approach" is needed to combat the conditions that cause girls and women to become vulnerable to human trafficking in the first place.

There are signs of hope in the work of Meawasige and others. One young woman named Jessica, now 25, was trafficked in Toronto in 2015 and escaped from her traffickers several years later. In meeting with the grandmother elders in 2018, she told of returning to her community with no one asking where she had been or what she had done.

An elders-sponsored "welcome home" ceremony during a tribal gathering proved a balm, Meawasige said. Another triumph for Jessica: Her trafficker was convicted and imprisoned.

"I've seen it with my own eyes: That girl has come far in a short time," Meawasige said. These and other experiences, she said, are stories that will "grab you at the level of the soul."

Looking ahead to an international day focused on trafficking, that kind of success is encouraging, Meawasige said.

"That's just one story," she said. "There are many others."

"It is important to keep anti-trafficking efforts alive all over the world. So much has been done, but we have to continue with patience and determination," she said. "Hope is concrete. Hope is renewed every day with patient gestures."

*An earlier version of this caption misidentified the people in the photo. 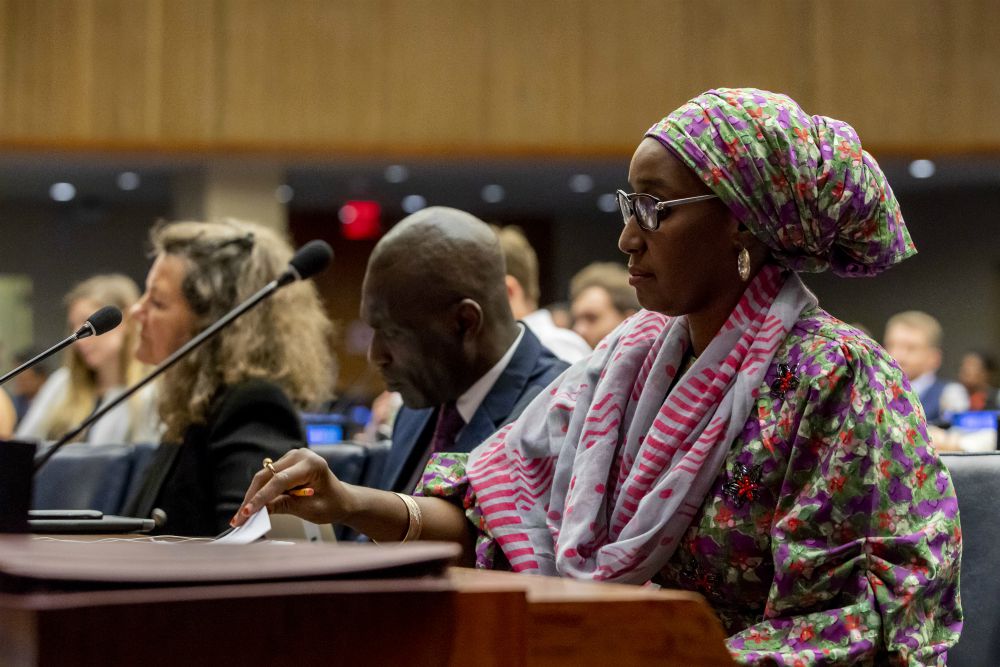 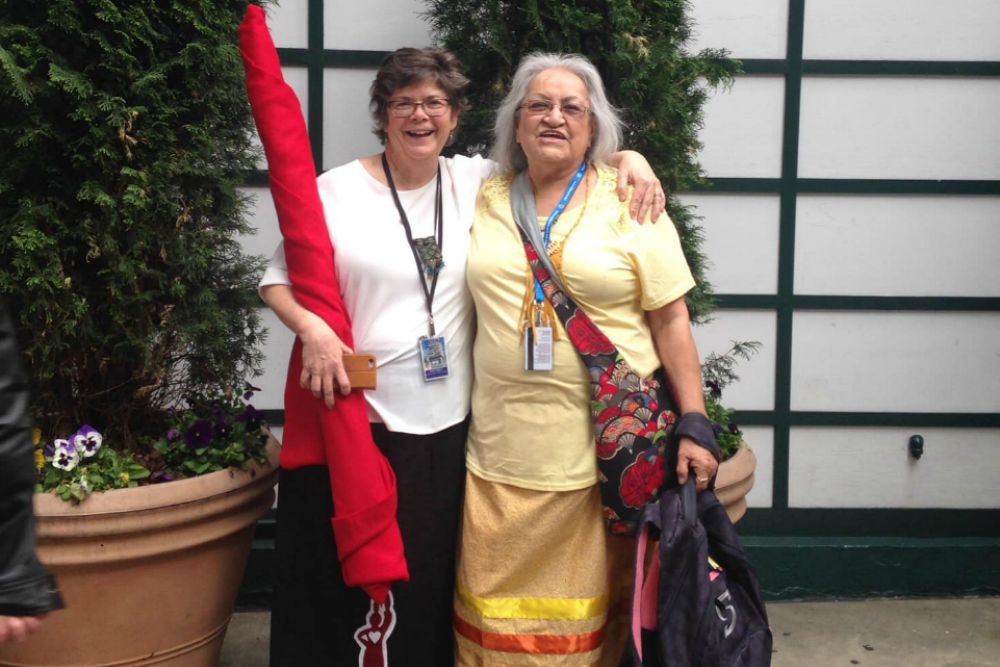 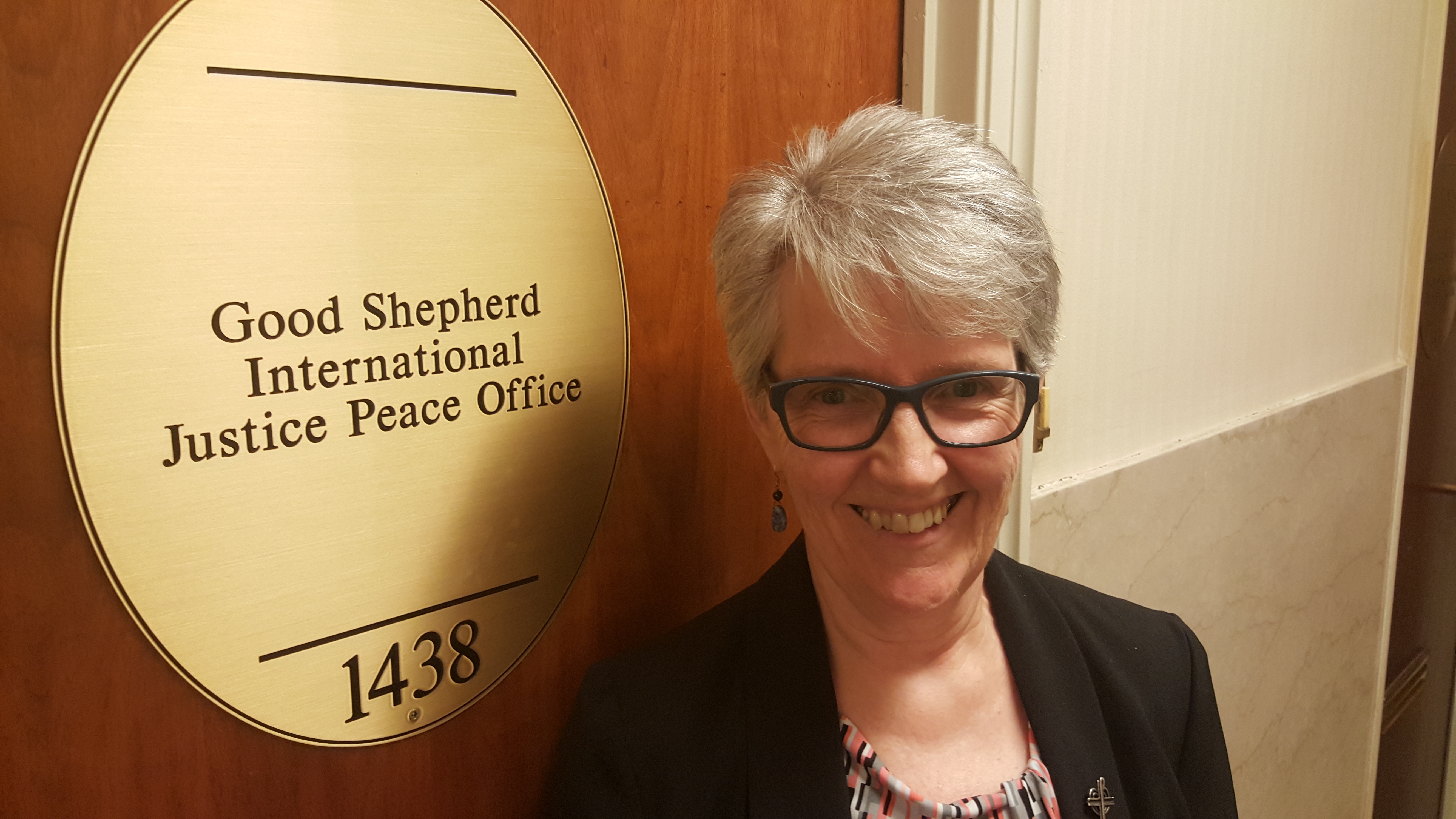 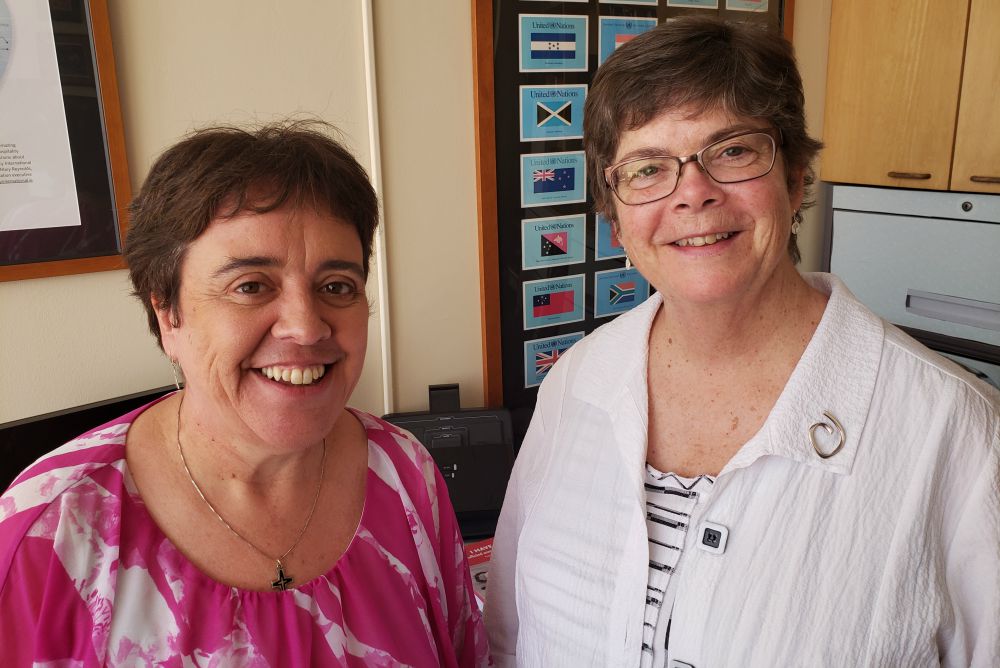 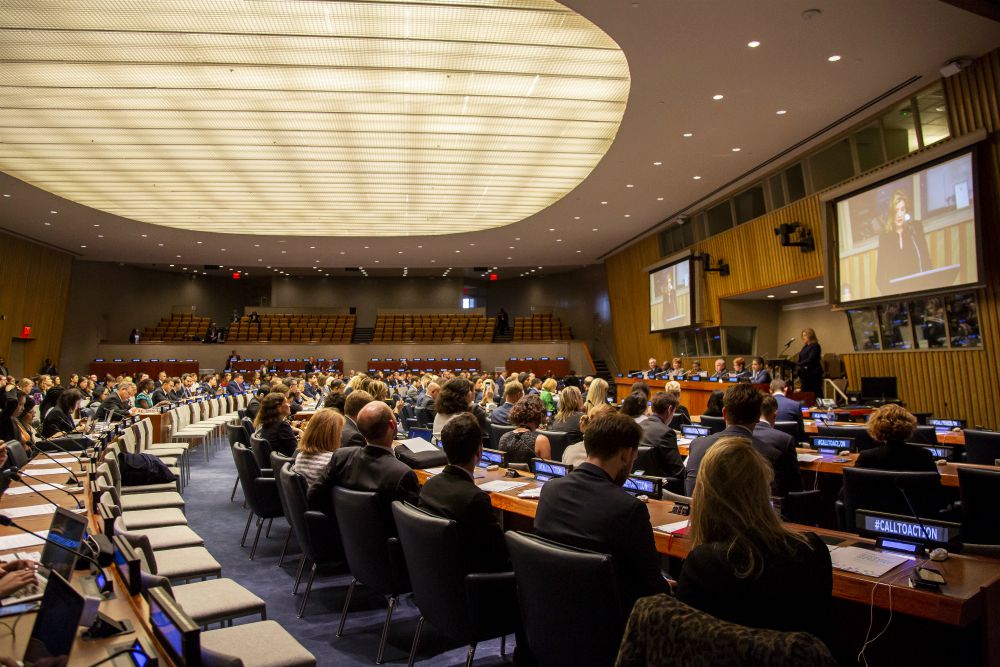 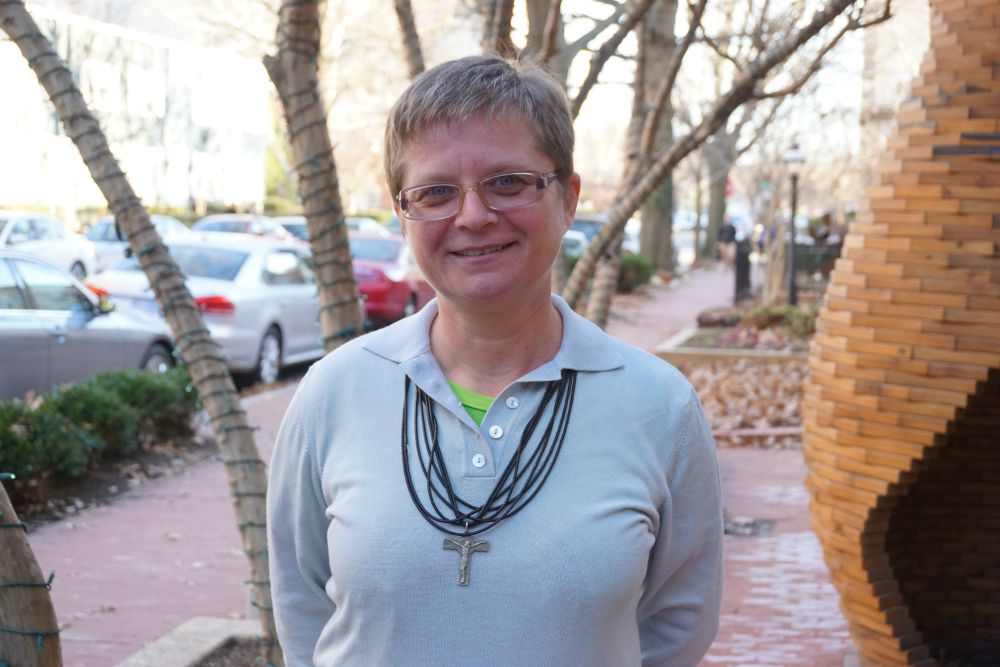