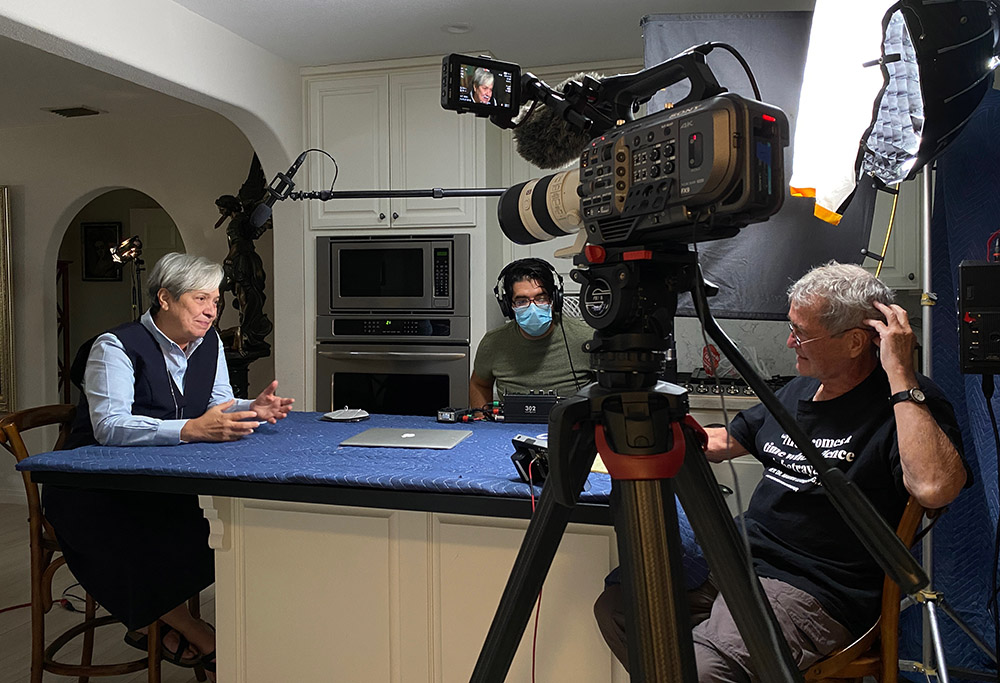 A face familiar to most North American sisters takes center stage in the upcoming film "Oh Mercy," a 10-minute documentary that highlights the refugees and migrants entangled in the crisis at the U.S.-Mexico border.

The filmmakers chose Missionary of Jesus Sr. Norma Pimentel to be the lens through which they view the issue of migration, focusing on the refugee camp in Matamoros, Mexico, where she regularly ministers.

With Pimentel as the film's "heroine," the audience can witness the realities on the border in a "highly compassionate, not preachy way," Robert Bilheimer, the director of the documentary, said in an interview with Global Sisters Report. (Bilheimer's previous films covered South African apartheid, human trafficking and the AIDs epidemic.)

Bilheimer met Pimentel, executive director of Catholic Charities of the Rio Grande Valley, two years ago when he covered her humanitarian respite center in McAllen, Texas, while he was on assignment for National Geographic. With an interest in character-driven documentaries, Bilheimer thought Pimentel was a "compelling figure" to tell the story at the border.

"If you can help people see and believe that basic goodness and humanity in people, and if they see, unvarnished, their suffering — our experience is that people respond to it," he said.

"Oh Mercy" is the first in a three-part series titled "Running to Stand Still" that focuses on global forced migration. The other two films will highlight migration from North Africa into Europe and the displacement of the Rohingya people from Myanmar to Bangladesh.

Seeing this issue as the "defining geopolitical, cultural, humanitarian issue of our time," Bilheimer said this series was an effort to "deconstruct" the many forces behind the involuntary migration seen around the world, whether it's due to climate change, gang violence or government failure.

Studying "global forced migration forces you to connect the dots," he said.

The documentary depicts just a few of the thousands of violent and desperate situations that have driven families to flee their homes in Central America. Bilheimer said that it's up to the viewers to determine what the film is about, but for him, it's a demonstration of the capacity for "deliberate evil — and I use the word carefully and advisably" — in the form of exclusionary U.S. immigration policies. "It's a scar on our nation's history."

Though Bilheimer said he will eventually release a feature-length version of "Oh Mercy," the decision to start out with three short films came from a desire to hold his audience's attention in a way that a 60-minute documentary might prove challenging.

Allowing viewers to access the film for free on its website ensures that it reaches as many as possible, as Bilheimer's production company Worldwide Documentaries is not-for-profit. "Oh Mercy" will premiere Thursday, Feb. 25, at 5 p.m. EST, and a panel with Pimentel, Bilheimer, Lee Gelernt, deputy director of the ACLU Immigrants' Rights Project, and other speakers will follow the premiere.

To register for the premiere and panel discussion, click here.