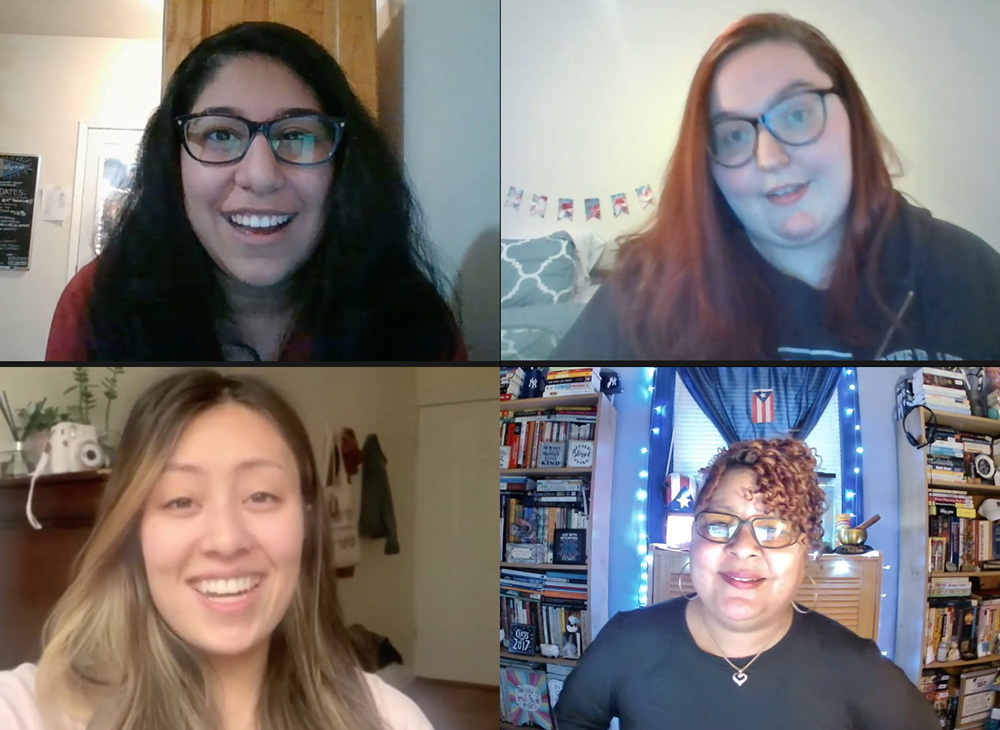 Part of the #justLOVE committee and Celia Ceballos (lower right) in a video talking about our mission that was sent to all Good Shepherd Services employees. (Celina Kim Chapman)

Editor's note: Notes from the Field includes reports from young people volunteering in ministries of Catholic sisters. A partnership with Catholic Volunteer Network, the project began in the summer of 2015.

February can be one of the most hectic months of the year when working in anti-racism and equity, specifically under the mission and culture branch. It not only contains Black History Month and Lunar New Year, but at Good Shepherd Services in New York City, we celebrate #justLOVE Day.

I mentioned this in my previous video, so to quickly summarize: Celia Ceballos, assistant director of mission and culture for Good Shepherd Services, created #justLOVE Day a couple of years ago in lieu of Valentine's Day to commemorate the values of our agency inspired by Good Shepherd's founder, St. Mary Euphrasia.

The committee — made up of my current New York City community members, two alumni Good Shepherd Volunteers who now work at Good Shepherd Services, and me — met in mid-January for the first time and immediately decided we would celebrate this day on Feb. 10, since Feb. 14 (the day we usually celebrate it) was on a Sunday. This meant we only had about three weeks to brainstorm ideas and initiate them agencywide. Along with the quick turnaround for #justLOVE Day, Lunar New Year fell on Feb. 12, making last week one of the busiest weeks of my life. 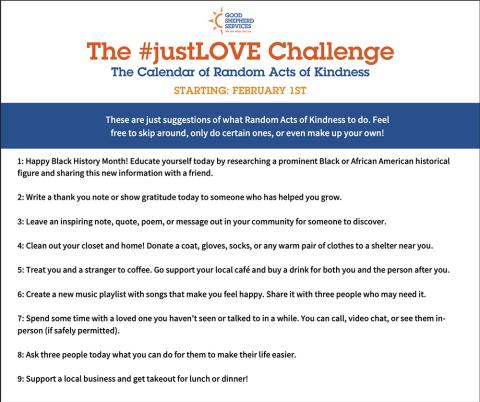 For #justLOVE Day, my committee and I decided on three ways employees could participate virtually and socially distanced.

First, we created a social media challenge for the first nine days of February where we invited all employees to do random acts of kindness and post a picture of them doing the acts on social media with the hashtag #justLOVE. We gave a suggested calendar of different acts of kindness people could do, but the overall goal was to spark employees to put in some extra love in the work they already do.

To get participation, we combined this idea with a potential to win a raffle basket filled with items that pertained to our six values: a sheep stuffed animal to represent bold leadership, a notebook from one of Good Shepherd Volunteers' programs in Thailand to represent commitment, and locally made candles to represent optimism, just to name a few. We also supported local businesses owned by people of color, like Café con Libros in Brooklyn and Pink Olive in Manhattan. Every post from an employee counted as a raffle ticket, so the more acts of kindness they did, the more tickets they received.

On #justLOVE Day, we planned to go live on either Instagram or Facebook and pick a winner of the basket as a final celebration to the day. Unfortunately, the social media challenge was hard for many employees to do, so we decided to transfer the raffle basket idea to the following idea.

The second way employees got involved in this day was less public. We created an easy form where colleagues could write each other #justLOVE messages to be sent on #justLOVE Day via email. These were meant to mimic the classic valentines we all used to give and receive in our grammar school days, but instead of confessions of love and admiration, we asked employees to send messages of gratitude and appreciation.

Everyone who wrote a message received a raffle ticket to possibly win the gift basket. This helped push even more employees to show #justLOVE, and we received and sent more than 300 messages to hundreds of employees across our agency.

The last initiative involved those who are on the front lines, going into work every day. Last year on #justLOVE Day, baked goods were sent to a program in the Bronx that had had a tragic flooding issue in their building and needed to relocate. This year, Celia wanted to see if we could send baked goods to our nine residential programs, like our domestic violence shelters and homes for youth in New York City's Administration for Children's Services, since they have been the programs that have been open all through COVID-19.

Since I have previously baked for the masses, I volunteered my community to bake cookies and brownies for all the staff members who risk their lives to keep our programs running. This meant we were tasked with baking more than 900 baked goodies for all to enjoy. 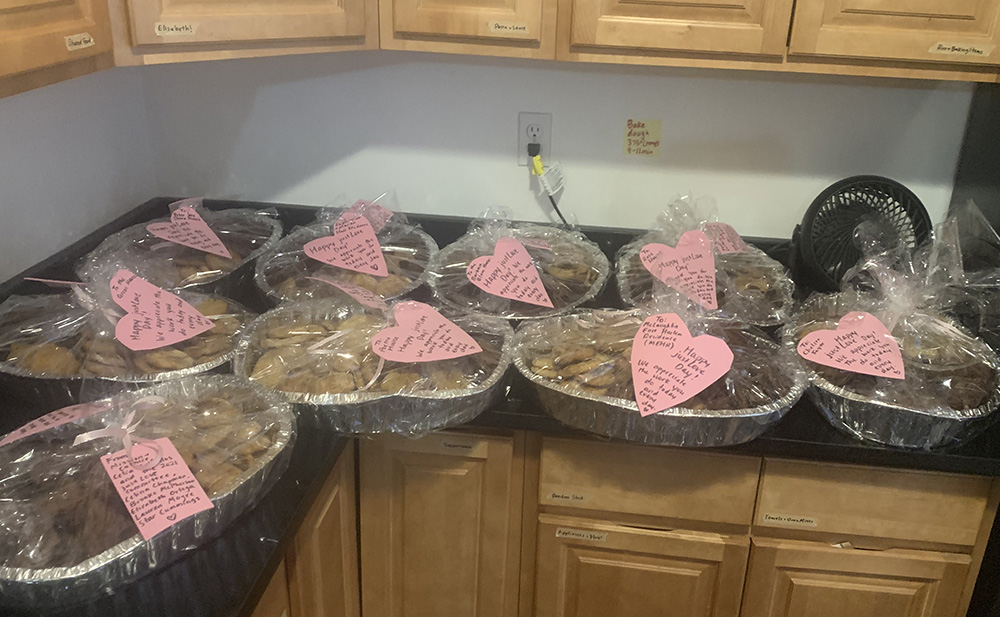 All the trays of cookies that were sent to the nine Good Shepherd Services residential programs around New York City. I handwrote a message for each place, saying how much we appreciate the work our residential staff do. (Celina Kim Chapman)

With all of this going on, I also offered to make a video message for Lunar New Year to send to all of Good Shepherd Services since I identify as Korean American.

At first, I was going to interview my umma ("mom" in Korean). But after being on my feet for five or six hours a day for two days in a row, kneading cookie dough, rolling balls by hand and dancing in rhythm with the oven timer, I didn't get to feel relieved or joy for long. As soon as the baked goods were sent out and messages of gratitude and happiness poured in from the residential programs, a video of a 91-year-old Asian man being pushed to the ground was going viral, and the news overtook my mind. Like previous headlines in the beginning of the pandemic, news outlets far and wide were covering the increasingly alarming rates of crimes against Asian Americans.

Already, before these events, I expressed to Celia that along with my interview with my umma for my video, I wanted to mention how the pandemic has been a difficult time for the Asian American community. With the previous president calling COVID-19 the "China virus" and conspiracy theorists spreading lies about how Wuhan, China, created the virus in a lab, I didn't want to talk about celebrating a fun holiday without acknowledging the fact that our people have been getting verbally and physically attacked on the streets just because of the way we look.

After that week's headlines, I decided to scratch the interview altogether and record myself reciting a poem I wrote about how I felt about the situation mixed with what's been going on. Truly, it was a liberating experience, and I feel empowered to continue sharing.

To say the week was a rollercoaster is an understatement. During all these events and situations, I also had to be aware and constantly conscious of Black History Month, trying to intertwine my messaging and processing with solidarity and observance of such an important month in a historically important time period for it.

In my poem, I mention how this month's observance for the Black community needs to be taken into consideration when talking about racial justice for the Asian American community.

We need to stand hand in hand and stop fighting each other, but we also need to acknowledge that historically, our injustices have been different. Our country has developed branches of systemic and societal racism for each community that need to be dealt with in their own ways.

Yet uplifting difference doesn't constitute separate and secluded fights. Black and African communities need support from Asian American communities and vice versa to make any real change. Policies that support one community can help another if we finally realize that one minority group gaining justice doesn't have to mean that other minority groups need to falter.

My emotions have been up and down with all these incidents of discrimination intertwined with remnants of #justLOVE, but at the end of the week, when I took a deep breath and found a moment of silence among my raging thoughts, I realized all I could do is root my voice and direction of life in the values of compassion, optimism, commitment, bold leadership, responsiveness and learning. Grounding myself in these six Good Shepherd values will continue to lead me and the communities I serve to true justice and peace.