by Melanie Lidman
This article appears in the Nepal feature series. View the full series. 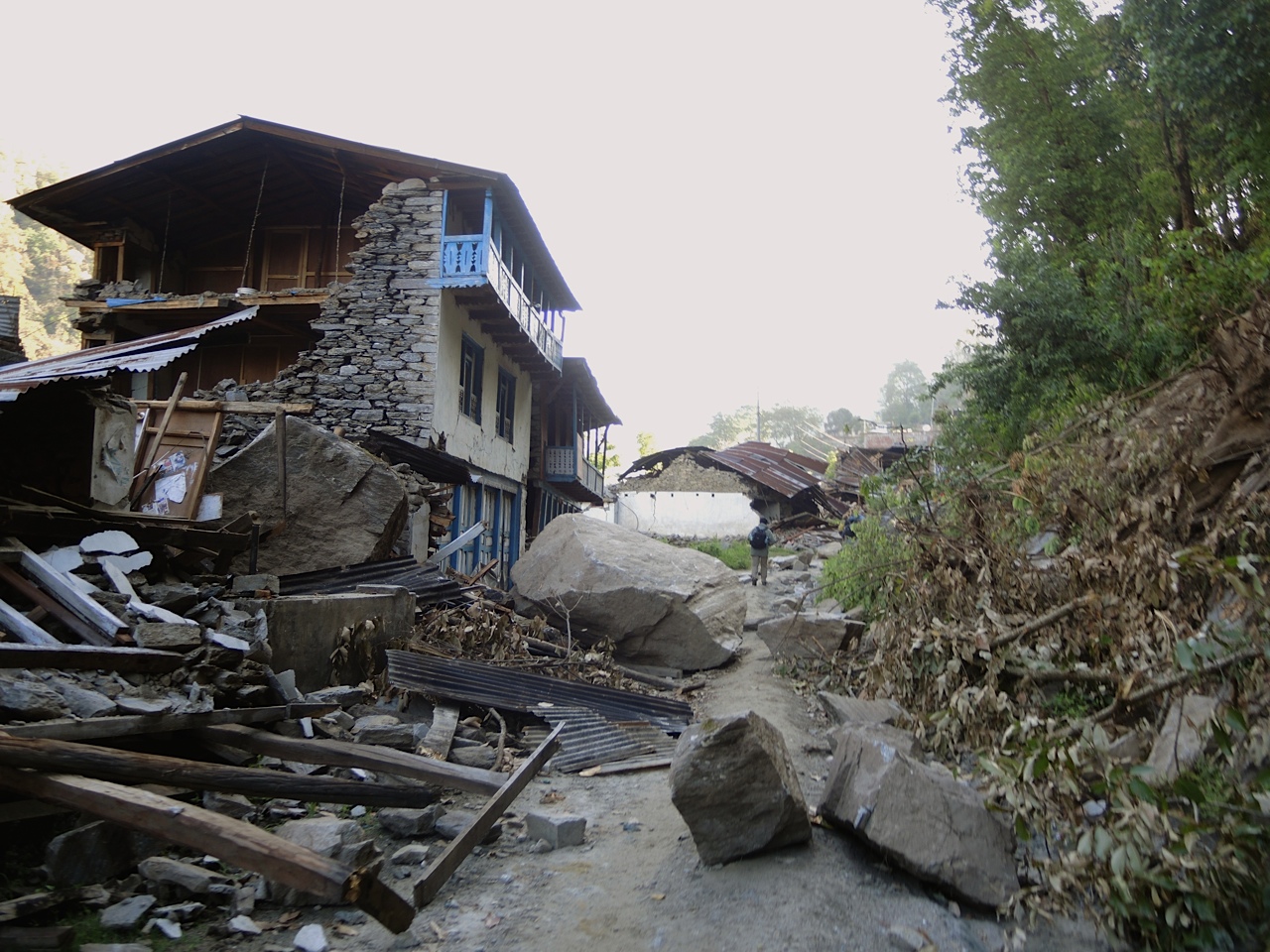 Enormous boulders that crashed down in a rockslide demolished homes in the village of Topani, in the hard-hit Sindhupalchok district, seven hours away from Kathmandu. (Melanie Lidman)

In Nepal, where the mountains scrape the bottom of heavens, religion is everywhere you look: Buddhist prayer flags flapping in the breeze, the red dot of the “tika” on peoples’ foreheads, from the Hindu worship service called puja. Temples and Buddhist stupas dot the skyline of every neighborhood, and small altars peak out from street corners, cradling sticks of incense that leave trails of smoke above the sidewalks.

But earthquakes don’t differentiate between what is holy and what is not.

When the 7.8-magnitude earthquake rocked Nepal on April 25, temples and stupas and altars crashed to the ground along with buildings and walls and 400,000 homes, crushing more than 8,000 people to death.

Nepal occupies a special place in people’s hearts. Perhaps because of the stunning beauty, or the friendly people, or the home of the highest peak in the world. Even before the dust settled, 330 aid groups from around the world started pouring into Nepal, to see what they could do to help.

Religious aid groups were at the forefront of this wave of humanitarian aid. There are only 10,000 Catholics in Nepal, but Catholic aid groups including Caritas and Catholic Relief Services rushed to help. Amidst the chaos of the first few days, the Jesuit St. Xavier’s College created an organized, measured response utilizing their vast network of students to ensure they were sending the right kinds of aid to the most remote locations. Good Shepherd Sisters, who were just days away from inaugurating a satellite community in Kathmandu, completely changed the nature of their service to provide earthquake relief in the devastated Gorkha region. The Sisters of Charity of Nazareth, along with 13 other congregations, most of them based in India with chapters in Nepal, are all working in different capacities to help with earthquake relief. 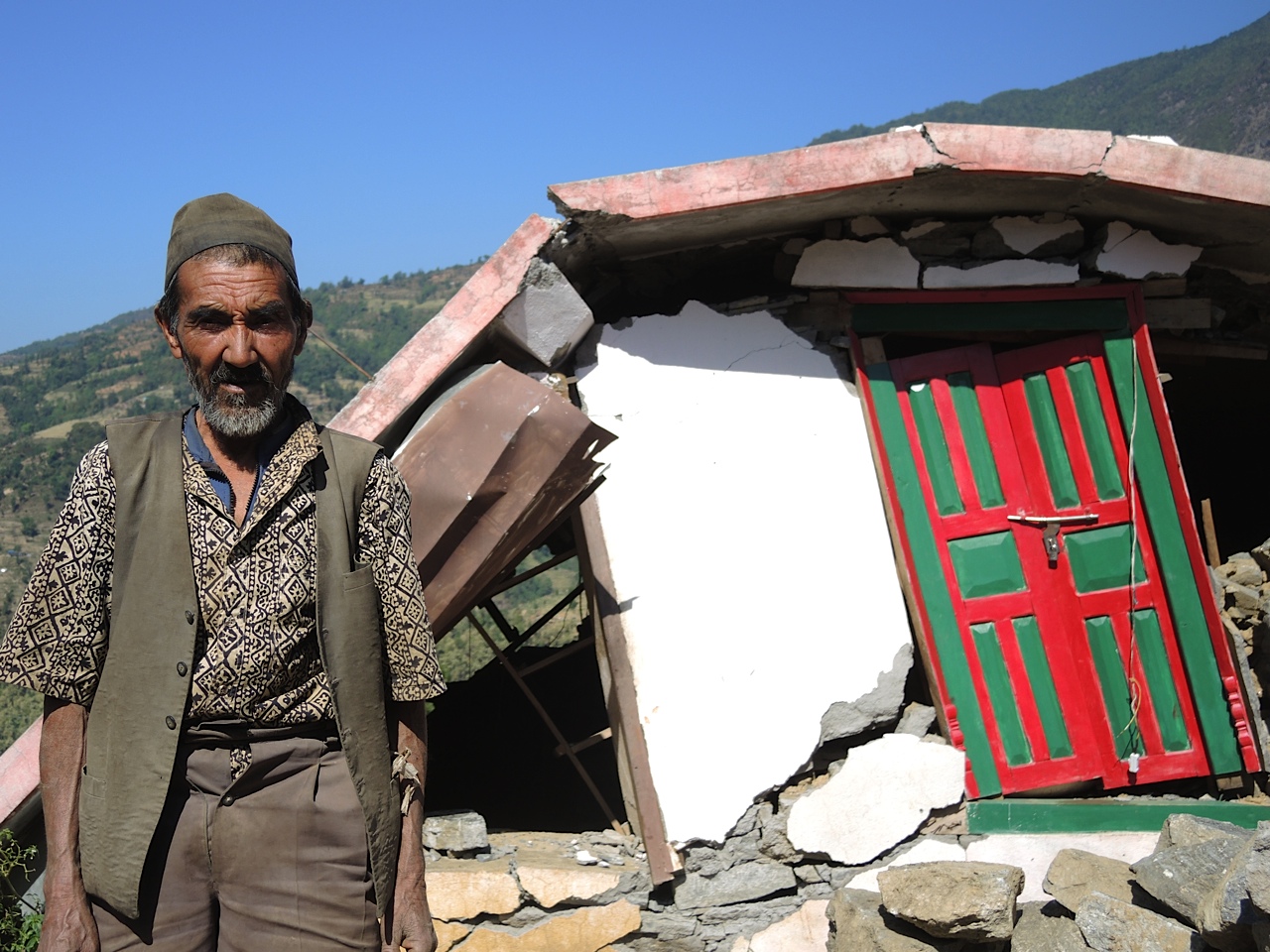 A man stands outside the ruins of his home. The monsoon season will start in June and aid groups are rushing to build semi-permanent structures to help people get through the rainy season. (Melanie Lidman)

In some parts of Kathmandu, you can walk down the street and ask, "what earthquake?" The resilient capital resumed business as best it can. When I left, just before the second quake on May 12, almost every store was open for business. Across the city, teams of local residents formed human chains to clean the piles of debris from buildings that crumbled in the quake. Many government buildings, like the Supreme Court, are deemed unsafe for use. But the National Society for Earthquake Technology, the leading Nepali earthquake safety organization, estimates that round 80 percent of the buildings in Kathmandu are safe for habitation.

The real challenge for aid distribution is the rural villages, scattered across rugged mountaintops. In the best of times, it is difficult to coordinate any activity across the interlocking patchwork of unnamed villages and neighborhoods. Then there’s the added challenge of blocked roads, lack of supplies, and trying to work with 330 humanitarian organizations from dozens of countries who have registered with the U.N.’s Office for the Coordination of Humanitarian Affairs.

My heart broke for Nepal as I walked through rural villages totally demolished by the quake. I could never have imagined the devastation, it was so complete. Entire villages were just erased from the face of the globe. As I hiked with a medical team to set up a mobile clinic at a school in a remote village, one family stood on top of the ruins of their home and begged for help as we passed. Anything, they told us, anything will help. We have nothing and we are in so much pain. Three members of the family had died in the quake, the patriarch, named Shista, told us. Porters had carried the medical equipment up ahead. All I had to give was a chocolate bar.

In one village in the district of Sindalpachuk, the top level of a two-story house listed precariously towards the road, about to topple in the slightest breeze. Walls were shorn away, leaving an intact living room inside, posters on the wall flapping in the breeze and an unmade bed still visible. Wooden doors were bent at crazy angles, roofs collapsed through one floor to the bottom floor – a “pancake,” in rescue jargon.

Humbling. This is the word I return to over and over. To face such destruction, to understand how helpless human beings are in the face of such immense natural power – this is humbling. There are so many villages like the one I saw around Nepal – isolated, demolished, grieving, so many impoverished places, which were barely surviving before the earthquake, and now everything is lost. 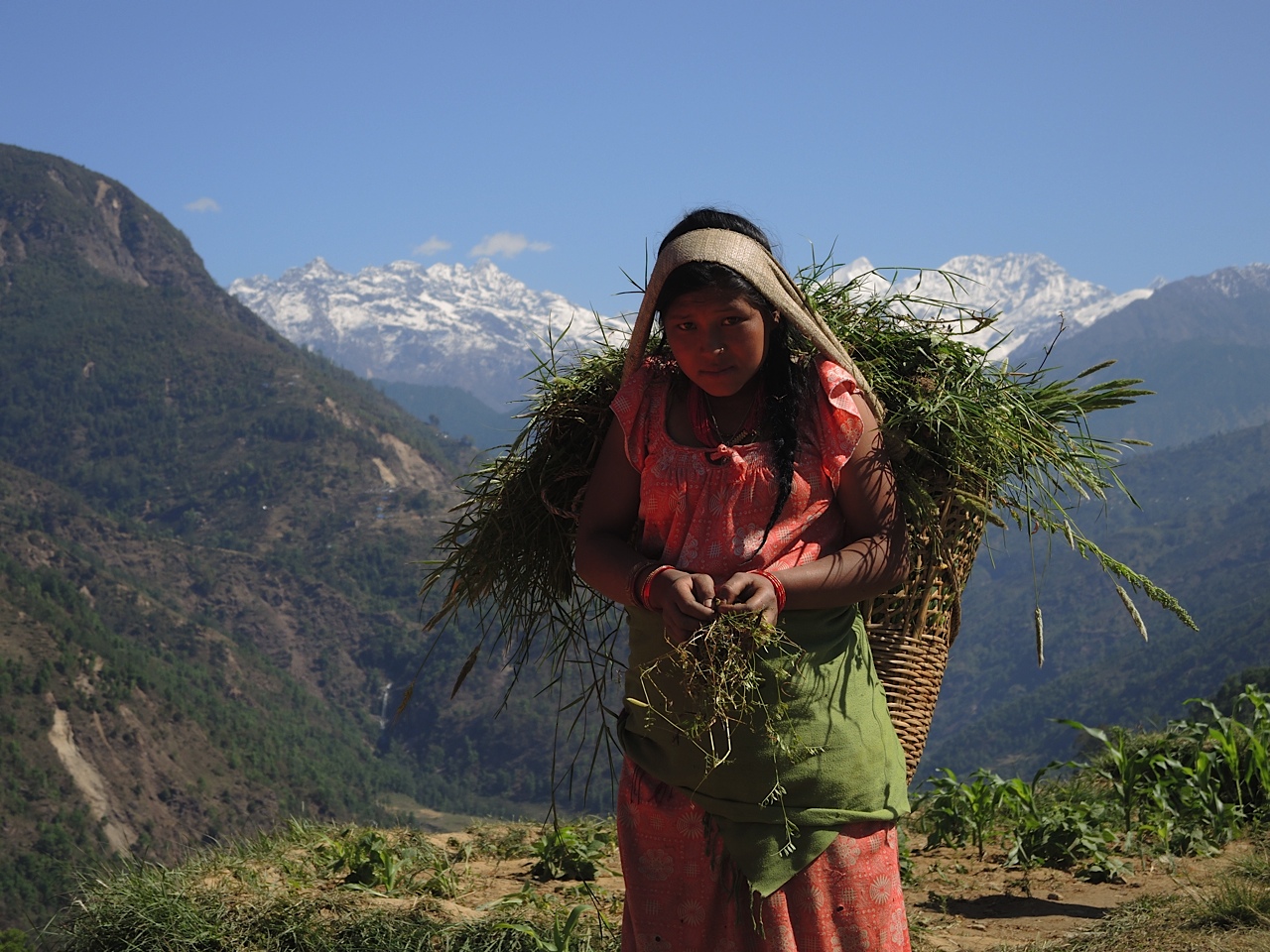 Villagers are substance farmers, and most barely make a living. The earthquake killed a large amount of livestock, destroying livelihoods as well as lives. Here, a young girl brings feed for her family’s remaining goats with the Himalayan range of Lakpa Dorje, on the border with Tibet, behind her. (Melanie Lidman) 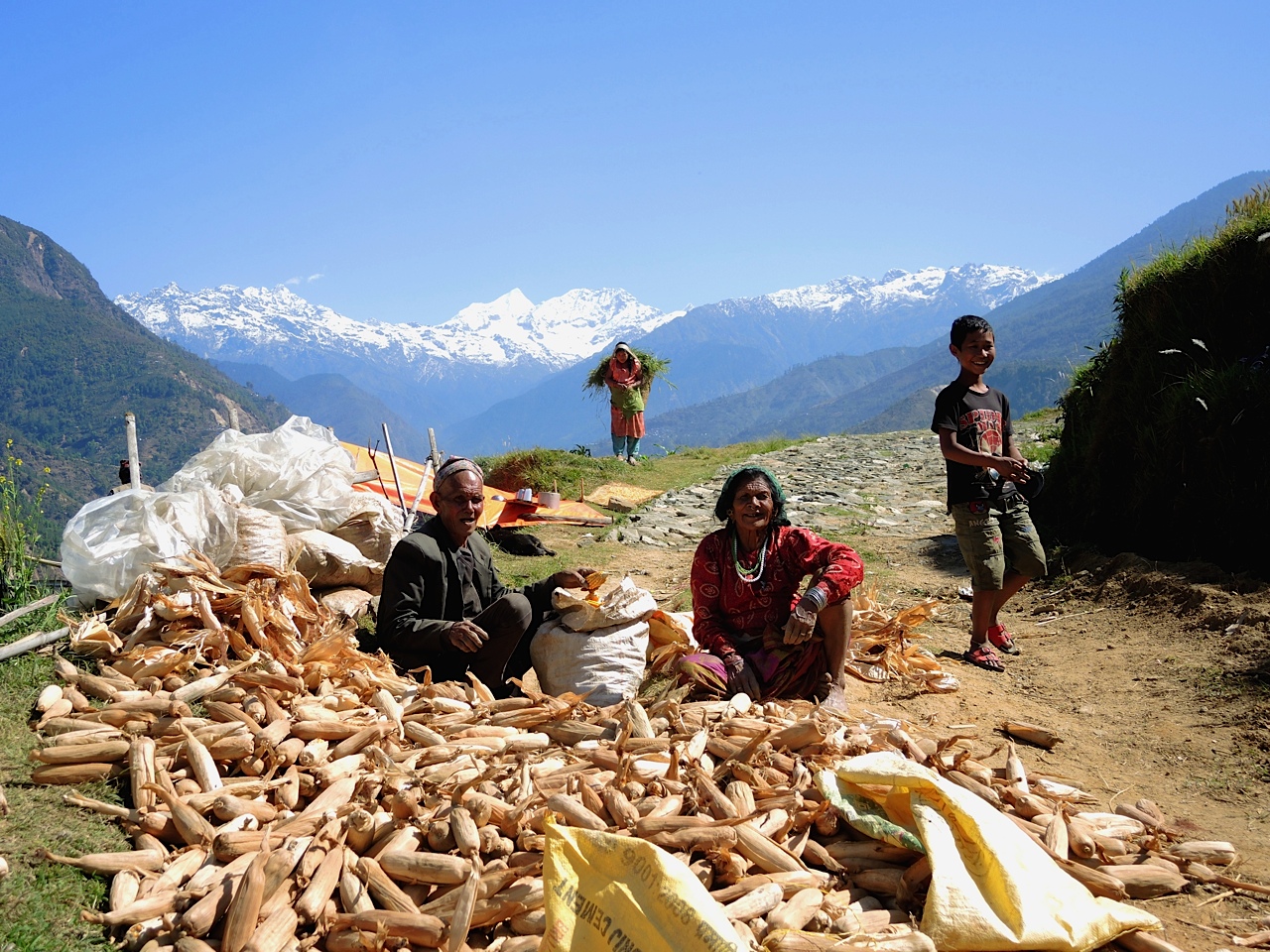 An older couple tries to salvage food stored in their destroyed home in the village of Tar in the Sindhupalchok district. Shelter is the most immediate concern for people in these kinds of remote villages. (Melanie Lidman)

One thing that impressed me during my reporting in Nepal is that local activists put an enormous emphasis on psychosocial care. “We need therapists,” Sr. Taskila Nicholas told me when I spoke to her after the second quake. The Nepalese recognized that in addition to addressing the physical destruction, they must be equally careful to address the emotional trauma of the earthquake.

“People were crying in the streets, I tried to console them but they just wouldn’t stop crying,” she said. Another aid worker told me something that I can never forget: Some farmers said they won’t plant their crops this year. “What’s the point?” one farmer told the aid worker. “The Earth wants to swallow me anyways.”

I was already home in Israel when I heard about the second quake, and my heart broke again. Towards the end of my week and a half in Nepal, when another aftershock woke me up at 3 a.m. I thought to myself, “Enough. Enough, I am ready to go home.” There is something so unsettling when you can’t depend on the ground beneath your feet. If you can’t trust that the ground is stable, you have no base, and nothing is safe.

I live in Israel, where every two years people on both sides of the border face a cycle of war and uncertainty. I recognized that feeling in Nepal, of always being hyper-alert, always planning an escape route whenever I walked into a building. But in Israel and Gaza, the situation is man-made. In Nepal, you can’t negotiate a ceasefire with tectonic plates.

Questions about spirituality and a just world inevitably arise in situations like these. Where was God when the mountains crumbled? I wanted to shout as I picked my way through the rubble of someone’s home. But the hundreds of groups who rushed to help Nepal, many of them faith-based Christian, or Jewish, or Hindu or Muslim or Buddhist, they were too busy helping to ask philosophical or spiritual questions. Groups like Caritas, Catholic Relief Services, even Nicholas, who has lived through and volunteered in other disasters before, put their head down and started working, helping and organizing and distributing based on years of experience in disaster zones. 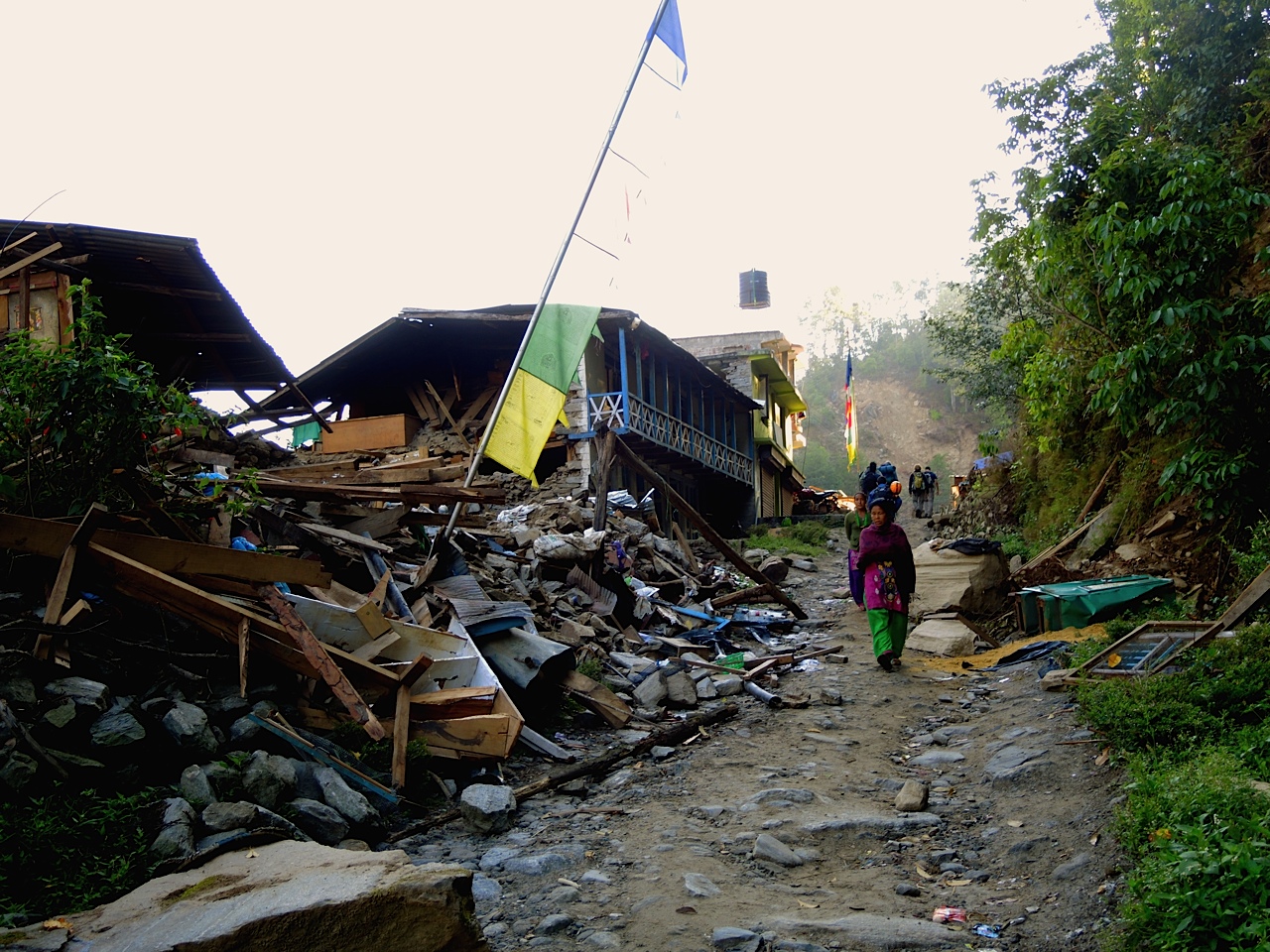 A woman walks beneath a strand of prayer flags in the demolished village of Topani, in the hard-hit Sindhupalchok district, seven hours away from Kathmandu. (Melanie Lidman) 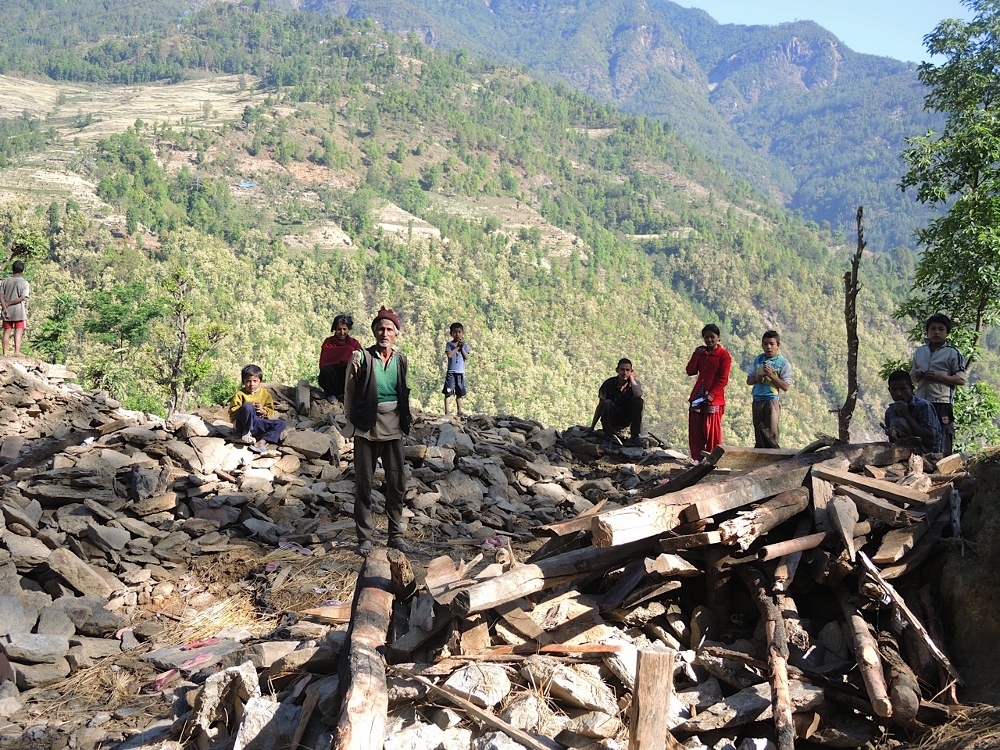 On our way to set up a medical clinic, a man named Shista (in the hat) begged us for food and medicine, but the porters had already carried the medicine ahead to the site of the clinic. Shista lost three family members, including his daughter. Here, he stands with his family on the ruins of their home. (Melanie Lidman)

As I walked through the destruction of a village called Topani, in the Sindalpachuk region, I wove my way around boulders the size of minivans that had toppled from the mountain above. An entire section of the mountain had slid into the village, destroying every home. Eleven people died.

From one shell of a house, a string of prayer flags flapped silently in the breeze, above a pile of rubble. The inhabitants of the houses may have been Buddhist, but that didn’t matter to the earthquake, or to the aid groups running to help. 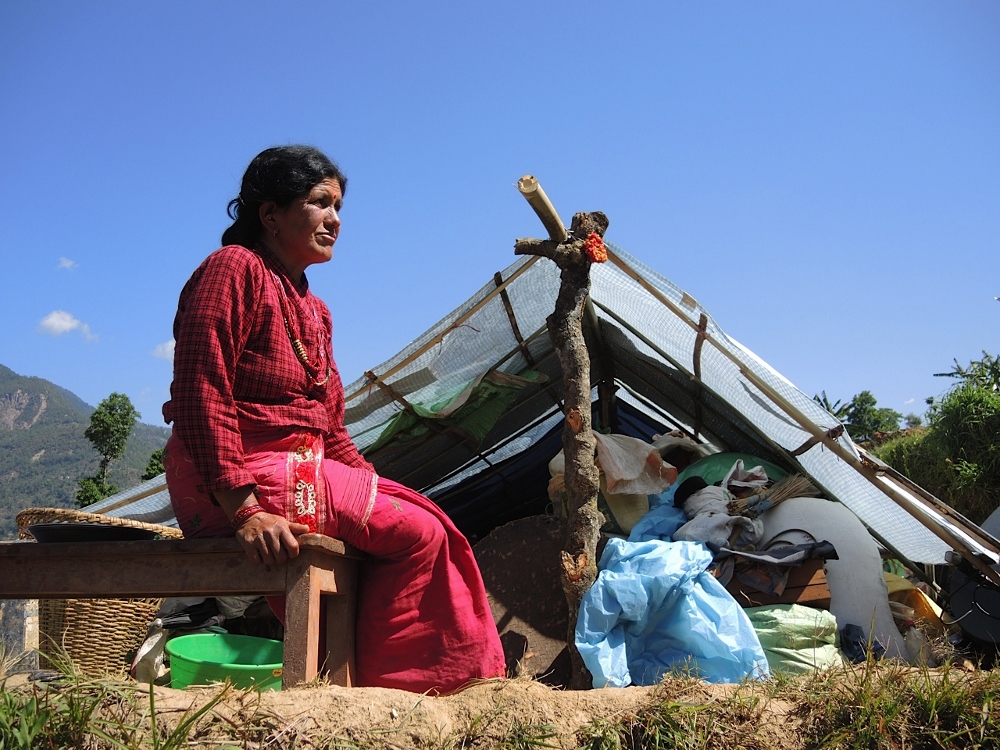 A woman sits outside the plastic tent her family constructed after their home was destroyed. Many people are living in these kinds of temporary structures, though even a little bit of rain can destroy all of their possessions. (Melanie Lidman) 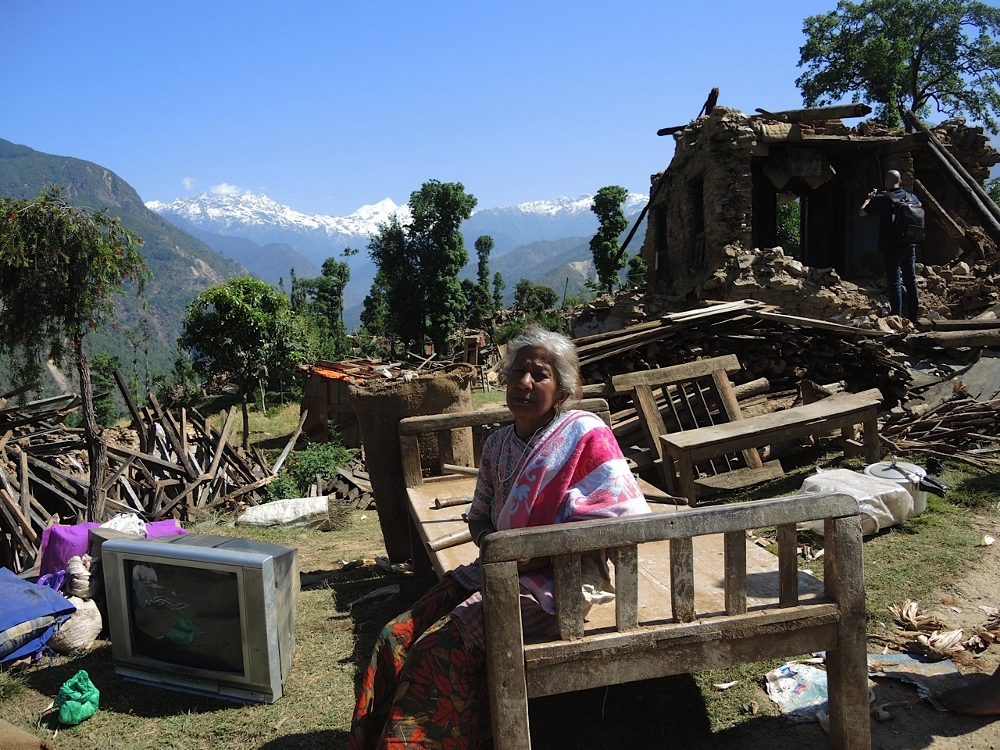 A woman sits with the salvaged items from her home. The villages had had electricity from a hydroelectric dam in the river, but it will likely be months before electricity can be restored to this area. (Melanie Lidman)