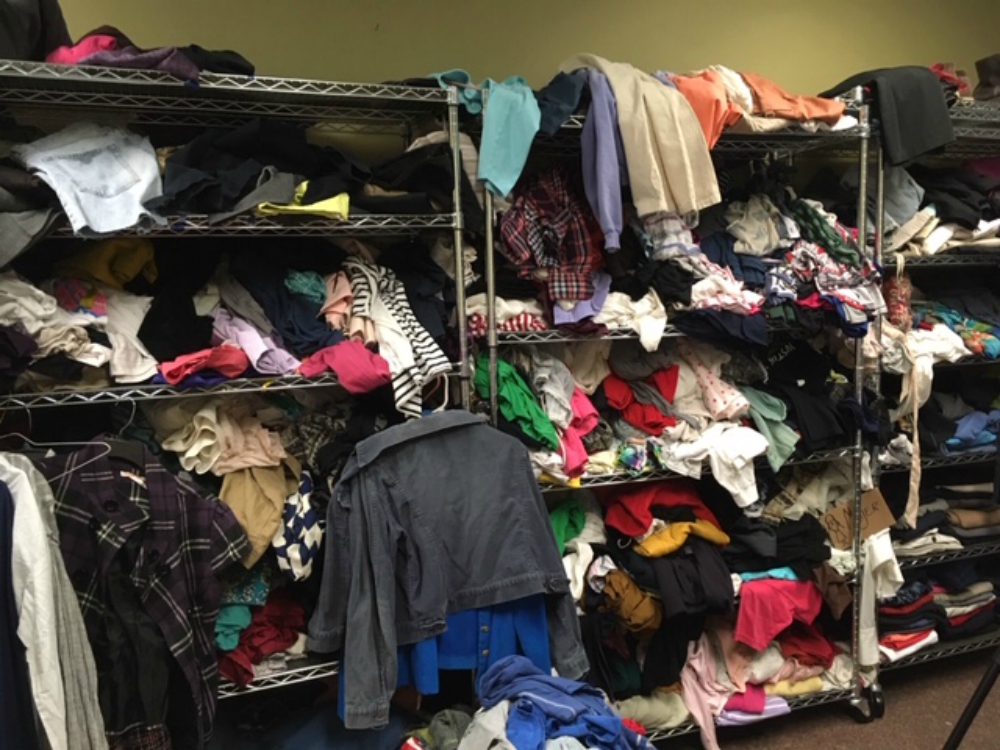 Donated clothing in need of organization at Annunciation House in El Paso, Texas, where 50 to 75 asylum-seekers arrive daily. (Courtesy of Sr. Claudia Calzetta)

Editor's note: Sisters have been helping immigrants and refugees at the United States' southern border for years, but a caravan of thousands of people from Central America hoping to seek asylum in the United States heightened attention to the issue and sparked a widespread response from women religious.

This is the second set of compiled reports from sisters working at or near the border who have written of the need caused by a recent influx of migrants unrelated to the caravan, and the plight of those seeking asylum.

Loretto Sr. Claudia Calzetta wrote of working at one of the shelters operated by Annunciation House in El Paso, Texas:

My service was at Nazareth Center, a former Loretto nursing facility. Today, Nazareth Center is one of the busy shelters for asylum seekers from Guatemala, Honduras, El Salvador and Mexico who have just been released from Immigration and Customs Enforcement custody. Nazareth guests typically stay just 1 to 3 days, long enough to address their basic needs and connect with family or friends elsewhere in the United States. This house has high turnover and unpredictable numbers, with the guest population entirely dependent on ICE's release schedule each week.

My first day of work, I arrived at 7 a.m. and found work in a room about the size of a large bedroom with wall-to-wall shelves used for storing donations: hundreds and hundreds of pants, shirts, sweaters, socks, shoes for adults, children and babies. In the corner of this room were bags and bags of large unopened donations stacked up waiting to be unpacked. Not knowing any Spanish, I thought, "I can do this job." Little did I know that each day usually between 50 to 75 asylum seekers are literally dropped off in late afternoon. After a clean shower and a hot supper, everyone is given the chance to go to the clothes room for "new" clothing.

In addition to the evening distribution of clothes, each day when seekers leave for travel to meet up with relatives, there is sometimes a scramble for jackets and coats for those who travel to states in colder climates. There wasn't, isn't much time to sort all this clothing between 7 a.m. and 4 p.m. I decided I needed a system and some helpers to get this room ready for new seekers every day. And then four beautiful women generously volunteered to help me, and from that time on I was known as the "closet lady" in charge of organizing everything.

Many donations are medium, large/extra large, long/extra long size or "grande, grande" as the women would say, and not appropriate for most asylum seekers who come from countries where the average size is 5 ft. and smaller. So it was and is a challenge to find suitable clothing. I felt sadness many times during the week when I couldn't locate clothing or shoes that fit. But somehow, someway we almost always found something that day or the next for everyone. Improvise was the word of the week.

So specifically what are the things that touched me, and why was this a life-changing event for me? It was directly related to:

• The smiles of the asylum seekers when they walked through the doors to Nazareth Center after being dropped off by ICE at Nazareth, and the many efforts to communicate how happy and thankful they were even after long journey. Their tired, relieved faces when all the volunteers welcomed them with smiles, hugs, outstretched hands and arms.

• The four industrious and generous women seekers who helped at different times during the week to organize the clothing shelves — folding, separating and setting up a system for everyone to find clothes that would fit. I could never have done it without them.

• The woman who came in looking for clothes for herself and young baby, a beautiful, gentle woman in her 30s who eventually broke down and cried because she was separated from her husband and other children. The fear that was visible in her uncontrollable sobbing that she would never see them again, her overwhelming sorrow, fright and her vulnerability.

• The dreadful, painful ankle monitors on swollen legs — women crying, volunteers trying to soothe; the humiliation most feel at having to wear these cumbersome and inhumane monitors. The term ankle bracelet takes on a new meaning for me — it is not a piece of jewelry.

• The fear, the anxiety, the longing for security, yet the tangible hope that was inexplicably present in all of the seekers for a better life for themselves and for their children. The courage, simplicity and humility of a gracious people willing to believe in the goodness of others.

• The children who just wanted to be children and play games of hide and seek, oblivious to what the future would be for them, who sorted through clothes with their moms/dads, looking for something that would fit them.

• The anxiety of those getting ready to leave by buses, planes to places unknown — holding tight to their bags of snacks, blankets, food and clothing for their journeys, the sincere request for prayers and blessings. The constant "gracias, gracias, gracias" to volunteers for food, clean beds, showers and clothes.

• The dedication of the many volunteers who came each day working 8 to 12 hours driving seekers to buses, the airport, making food/travel bags, translating and facilitating phone calls to family members. The volunteer system at Nazareth Center that organized three hot meals each day to feed the seekers.

• The consistent dedication of the people of El Paso for their continued support of Annunciation House and Nazareth Center and all the shelters in this city and the Loretto community in El Paso who generously give of their time, talent and treasure to help with this crisis.

I had no idea what a life-changing experience this week would be for me — a 75-year-old former educator/administrator who did not know a lick of Spanish and who had zero experience working with such vulnerable, lovely and scared people. I wasn't prepared for the reality of what I would encounter in just nine days: the fear that asylum seekers have not knowing where they are they going; the fear they have of the unknown judge who will hear their case; the fear for their children's safety; and, ultimately, the fear of being sent back to countries where they fear torture and death. But amidst all of this, I also saw and sensed the hope, the willingness to believe in our country where they wanted to work, raise their families and have a chance for freedom.

How many times I heard sweet and sincere "gracias," felt energetic hugs when I could find clothes that could fit. I became part of something so genuine and experienced the reality of everyone joining hearts and hands across cultures and lands.

On my first day at Nazareth, one of the volunteers told me if I wanted to see the face of God and the suffering Jesus, this was the place to be. How right she was. None of this was theoretical anymore. I saw the faces, the humanity of those who previously I only saw on TV or in newspapers.

And 10 days later when I left El Paso, I knew that I had changed. I made a commitment to myself to continue to try and do everything that I can from where I am to advocate and help these beautiful, sincere and suffering people. I want to be changed, to be more thoughtful, caring and appreciative and to never forget the faces, the sweet smiles, the hugs and even the tears. Strangers impacting strangers in ways I never imagined could happen. I am so grateful for the opportunity that Loretto offered to our members. I was able to witness to the courage, stamina, gentleness and love that was present at Nazareth Center. I did see the face of God each and every day. I received much more than I gave as "closet lady," and I will never be the same.

Sr. Pat Madden, a Sister of Saint Joseph, was at the border recently and wrote a reflection titled, "Los Cruces" ("The Crossings"):

In the dark hours, I leave my home.
My heart is aching because there is no turning back.
Tragic stories of others' escapes weave through my mind.
I breathe in deeply the hope that my family places on my shoulders.

The crossing is treacherous; in and out, up and down.
My family's goodbyes echo in my ears and I stumble with grief.
The way is filled with exhaustion and an unquenchable thirst — for freedom.
At the base of the mountain, I grasp for strength to scale an impossible dream.

My legs wobble, my eyes tear and my heart pounds; my nerves are on edge.
On the top, with one more step, I cross over the border with fear and trepidation.
I cross over into danger, seeking a way to provide for the people I love.
Whichever direction I choose, determines my future; danger and detention or dignity and respect.

So many immigrants have stood at crossroads. They have climbed walls, fences, high mountains and crawled through desert lands searching for a chance for a new life.
However, they have found despair and humiliation as the end result of their Calvary journey.

Despite some very cruel realities, the asylum seekers continue to look for Resurrection in a far distant land.

Reports have been edited for clarity.

The pathways and destinations of Syrian refugees

Refugee students want 'a future after all the trauma they've had'