Charities and volunteers along the U.S. southern border were already stretched to the limit by the hundreds of asylum-seekers they receive each day, but now immigration experts say resources will be stretched even thinner and immigrants will be put in danger by changes in U.S. and Mexican policy.

If the two nations proceed with a reported agreement to require asylum seekers to remain in Mexico until their cases are complete, more of the burden of enforcement and meeting the humanitarian needs will be shifted onto Mexican communities unprepared for the crush, as our colleague Maria Benevento reports in National Catholic Reporter.

This is the third in an occasional series of compiled reports from sisters working at or near the border.

I am not certain whom to credit for the version of the Gloria that was sung, I just know that I gasped and tears started rolling down my face when I heard the words and connected them to my memories of the previous days. "…and on Earth peace to the people, people of good will…"

The face of a little girl who was so shy at first haunts me. Fellow volunteer Kathryn Raistrick was able to get just a hint of a smile from her in response to Kathryn's silly comment about the little one's T-shirt. And she is now forever in my mind as la chica con la sonrisa bonita (The girl with a pretty smile). The next two days I called her this and shortly before she left, it was her hug as well as her dimples, that nearly knocked me over. This little girl and all the other individuals we met, guests, hotel staff members, volunteers, folks we encountered along the way, the family and friends who sent us on our way, all seek peace; all are people of good will.

Sr. Val Lewandoski, of the Servants of Mary (Servite Sisters), described what she saw when she participated in a Border Immersion Experience sponsored by the Sisters of Mercy:

While there, I learned about the plight of people newly arrived at the U.S. border from the Central American countries of Honduras, Guatemala, El Salvador and from Mexico. In all of these countries, violence is part of daily life and gangs, government and police work together to crush dissent. I heard many stories of individuals and families fleeing for their lives, threatened just for being related to someone who publically defied the rampant corruption of those in power.

One morning, we walked across the bridge that connects El Paso, Texas, and Juarez, Mexico, the same bridge where refugees wait, many wishing to ask for asylum in the United States, many believing they will be accepted into the "land of plenty" once their story is heard. Statistics show the majority are mistaken: only two out of 100 are granted asylum by the El Paso courts while in detention, and six out of 100 when released outside of detention. Refugees presenting themselves at the port of entry are kept in a holding cell while being "processed." Until recently changed by court order, the number of days a person could be held in this way was unlimited. We heard stories that up to 40 people were packed into a room with one toilet, no shower or sink, and one meal provided per day. One man explained his technique of sleeping upright against a wall because there was no room left to lie down on the floor.

Annunciation House oversees the placement of the immigrants in shelters after Immigration and Customs Enforcement releases them from the holding cells. These people, including children, have no food, money or arranged shelter. Most are unsure of their final disposition. They will be assigned court dates at which it will be determined whether they will be granted asylum or deported. If they have relatives or friends in the United States who will sponsor them, shelter volunteers make calls to arrange for transportation, pack lunches and drive them to the airport or bus terminal. If they have no sponsor, they will be kept in detention. Many request to be voluntarily deported after futile attempts to plead their case. Most immigrants speak Spanish but some are indigenous people who speak dialect, have never traveled by plane and have difficulty finding their way through our airport systems. All those traveling wear ankle bracelets so their whereabouts can be monitored.

During a visit to Juarez, a city of 1.5 million people, we saw dire poverty in the neighborhoods: dirt roads, houses that appear patched together, fences made from old box springs, hungry dogs scavenging in the streets, beautiful children begging. Knowing that poverty exists in every city of the world did not lessen the impact of these scenes. Some of the homes lie just across a barren road from the border wall that separates Juarez from El Paso. Our group had the freedom to walk on both sides of that wall. Folks in the Juarez neighborhood can only look through the wall's iron slats in one direction: toward the city of El Paso with its functional highways and beautiful architecture. Walking along the wall brought the realization home to me that borders are human inventions, arbitrarily designating who is considered "in" and who must stay "out." The wild creatures of the area are also excluded, deprived of the freedom to roam their natural habitat. Only the birds have free access to both sides of the wall.

The city of Tornillo, Texas, is located about 45 minutes from El Paso, in an area of desert and small towns. This is where a tent city has been erected, capable of housing 3,800 children, mostly adolescents, who have been designated "unaccompanied" or separated from their families. It is a stark and surreal picture: a sea of beige structures surrounded by fencing and topped by barbed wire. Guards are stationed at the entrances and exits. Our group joined an interfaith vigil of about 90 people outside of the camp, where we saw signs imploring mercy for the children. The U.S. is detaining them at a cost of $775 a day per child. Yes, they have the necessary food, clothing, etc., but this is a sterile environment. They are not free to leave or see their families. Their emotional and spiritual needs are certainly not being met. This is an artificial city of potentially traumatized children.

The plight of immigrants is real and complex. We spoke with Border Control agents, resettlement workers, caring volunteers, dedicated religious and clergy all working to support the immigrants through a confusing tangle of administrative and court-related requirements. Most important, we saw the immigrants themselves. Shy smiles came from adults and children in response to the few Spanish words I offered. Many looked lost and frightened. A resettlement volunteer who is spending a year helping out at Annunciation House told us that in every encounter with an immigrant she attempts to offer the warm welcome they did not receive during their period of processing and detainment.

The Leadership Conference for Women Religious, American Friends Service Committee and the Interfaith Immigration Coalition are calling for a Week of Action for Migrant Justice, starting Dec. 10, which is International Human Rights Day, and ending Dec. 18, International Migrants' Day.

Congregations and organizations are invited to host solidarity actions in their own communities, spread the message through local media and social networks, and call for changes in U.S. immigration policy.

Reports have been edited for clarity. 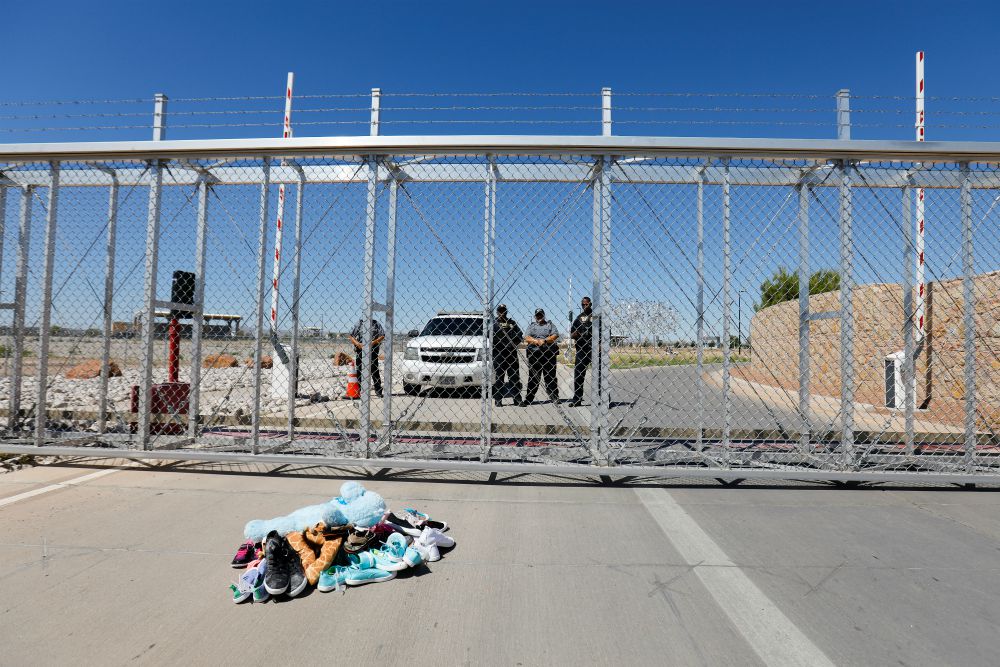