• We're live tweeting the keynote addresses and other public discussions, too!

This article appears in the LCWR 2015 feature series. View the full series. 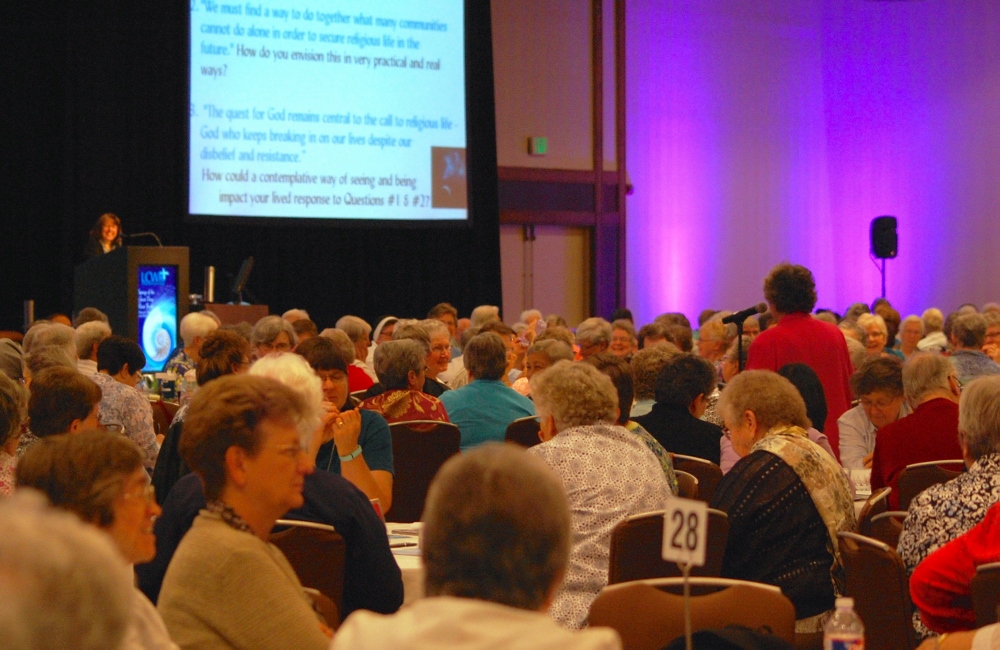 Houston, Texas — Not all of the activity at the Leadership Conference of Women Religious' annual assembly is worthy of a separate news story. Still, your GSR reporting team is here from gavel to gavel, and we know our readers are following along with great interest, so here's a wrap-up of some of the things that didn't make the big headlines at the conference.

Sometimes events move faster than you're able to adapt to. That's been seen a few times here so far.

The contract that LCWR officials signed in 2012 for the hotel rooms and conference space at the Hyatt Regency in downtown Houston was based on the number of rooms they expected to need. The good news is that they needed more rooms than set aside. The bad news is no more rooms were available, meaning some members had to stay at another hotel and ride a shuttle.

Another example: Officials planned sessions on family detention only to have federal courts issue rulings that — hopefully — will put an end to the practice. True, the issue is not yet resolved, and this is one very close to the hearts of women religious for obvious reasons, but circumstances have changed since the schedule was set months ago.

And finally, the nearly 800 sisters gathered here in Texas, which has put more people to death than any state in the union. As one sister pointed out on an open mic, they were silent as the state put to death two prisoners this week.

Now, that's not to say LCWR and women religious have not spoken out on the death penalty. But it's also hard to imagine 800 sisters — leaders of their communities — gathered here while two people are put to death without making a public statement.

"Wasn't there something we could have said, some stand we could have taken as these two men were executed?" the sister asked, to murmurs of assent.

In the meantime, the Connecticut Supreme Court saved 11 prisoners from execution, ruling the death penalty is unconstitutionally cruel and unusual. Connecticut outlawed capital punishment in 2012 — except for the 11 men who were on death row. Thursday's decision means those men are spared, as well.

Expanding work on the margins

If critics thought the Congregation for the Doctrine of the Faith's doctrinal assessment and mandated changes were going to rein in U.S. women religious and get them to focus more on fighting same-sex marriage and abortion and less on serving those at the margins, they were wrong.

Not only have sisters simply continued to do what they do, but when presented with an open microphone Thursday morning, several called for expanding that work in a way that may be the opposite of what critics were hoping for.

It happened during what was supposed to be an open discussion of the morning's keynote address by Divine Word Fr. Stephen Bevans. The plan: Tables drawn randomly would send a representative to the mic to share what their table had talked about while processing Bevans' presentation.

But one sister approached the microphone, saying that her table hadn't been called but they wanted their voices heard anyway.

"We think it's time we stood for the gay and lesbian community. These people are suffering profoundly," she told the group. "They are coming to our churches, our programs — when are we going to stand for them?"

Another sister said her table had also sent her to the microphone despite not being called on.

She said that all of what LCWR has learned about contemplative dialogue in the last three years should be put to use in not only ministering to the gay and lesbian community, but in fighting discrimination. It may be easier to stand up to the government than it is to stand up to church leaders, she said, but that does not mean sisters can stand by and allow discrimination to continue.

A Dominican sister noted that Aug. 6 was the anniversary of when the Dominican Sisters of St. Catherine of Siena in Iraq had to flee the Islamic State militants. They have been in exile in Kurdistan under appalling conditions ever since.

The Adrian, Michigan, Dominicans have a close relationship with their sisters in Iraq and have commissioned an art project to help raise money for them. Dominican artists are creating paintings of origami peace cranes and selling them, with all proceeds going to help the Iraqi sisters.

You can see and purchase them — or simply donate — here.

Officials announced Thursday that St. Joseph Sr. Mary Pellegrino has been elected president-elect. She will be installed to the post Friday afternoon.

LCWR uses a system of three collaborating presidents — the president-elect, the president, and the past president — meaning they are essentially elected to a three-year term in office, with the title changing slightly each year.

You'll see a complete story and photos on this later, but we wanted to share the news.