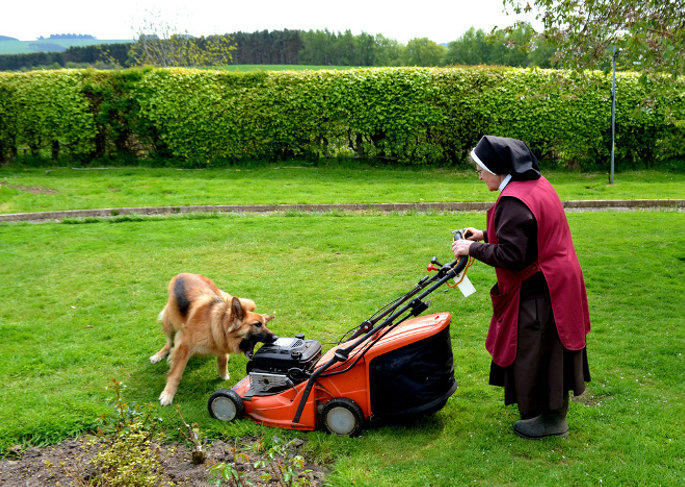 A sister of the Poor Clare Monastery in rural Scotland mows the lawn. This photo is part of a new series by photographer Craig Buchan that shows women religious doing everyday tasks.

One woman’s decision to become a sister is feeding headlines all over Great Britain. What’s the big deal? Read on.

I reached out to Buchan by email and asked if we could share some of his work here. He eagerly gave us permission.

The series, “Commitment,” features the sisters of the Poor Clare Monastery in Scotland going about their daily lives – vacuuming, mowing the lawn, taking care of the dog.

“I hope to give an insight of what life is like as a nun in this day and age and to show a lighter side too,” Buchan said in a statement to the Huffington Post.

The photos have been viewed more than 1,100 times so far on his website, craigbuchan.co.uk, where he writes: “A vocation to be a nun comes from God’s free choice of certain individuals; commitment comes from our free choice to cooperate with the graces received with His call and is the fruit of our loving self-surrender to God.”

A report by the United Nations Regional Information Centre tells the inspiring story of two faith leaders – a Muslim imam and a Catholic sister – who are trying to create peace in their war-ravaged corner of the world.

The Central African Republic has been under violent siege by clashing Christian and Muslim militias for more than two years. The United Nations reports that thousands of people have died and nearly a million have been displaced by the violence.

That makes the work of Imam Moussa Bawa, 72, and 80-year-old Sr. Maria Concetta all the more newsworthy as they find ways for people of the different faiths to come together.

She works as a midwife at a hospital run by the Congregation of the Daughters of Saint Joseph of Genoni from Italy. Bawa works with refugees.

The U.N. report calls them “two courageous people who refuse to give up on the Central African Republic. She works around the clock as a midwife, he teaches refugees forgiveness and reconciliation.”

Said Bawa: “We have to talk to one side and the other side and then create an opportunity to bring both sides together.”

British media, including London’s Daily Mail, are gobsmacked, as they say, by the story of Martina Purdy, a top BBC political reporter who has quit her 25-year career as a journalist to become an Adoration Sister.

The Northern Irish journalist, who is active on Twitter – @purdypois – tweeted that she’s not “planning a running commentary” on her new life, but she’s been overwhelmed by people’s support of her decision.

The British public is eating up her story. She was photographed, like a celebrity, last weekend on her way to Mass at St. Peter’s Cathedral in Belfast with members of the convent.

She issued a statement asking for privacy for the sisters.

And more news about Poor Clare women, this time the community based in Nuns’ Island, in Galway, Ireland.

Last year the women wrote a book of prayer and meditations, Calm the Soul: A Book of Simple Wisdom and Prayer, that spent 15 weeks at No. 1 on bestseller lists in Ireland.

Now the women have collaborated on a similar book with a group of Irish Franciscan monks, according to The Independent in Dublin. Some of the monks recently traveled from their home in Dublin to Galway to give copies of the new book, The Simplest Prayer, to the sisters before its official release.

The gesture is especially kind, given that the women, who are a silent order, rarely travel and therefore cannot attend any public events to publicize the book.

The Rev. Francis Cotter, one of the writers, said the prayer book is intended for everyone, not just those suffering in these hard, economic times. “Life is hard for many people,” he told the Independent.

If you write it, who will read it?

If the new report by the Center for Applied Research in the Apostolate at Georgetown University broke any ground, you certainly couldn’t tell it from the attention it received from the mainstream media.

The sound of that response can be summed up in one word: Crickets.

Most outlets, including the The Washington Post and Huffington Post, published the same story written by David Gibson of Religion News Service. And every headline emphasized the negative. A sampling:

“The number of nuns in the U.S. is declining,” by the Deseret News in Salt Lake City.

The Chicago Tribune reported on the funeral mass for Sister Jean Stickney, 86, and Sister Kab Kyoung Kim, 48, two women religious killed by an out-of-control truck in suburban Chicago on Oct. 5.

About 400 mourners filled St. Bernadette Catholic Church in Evergreen Park this week to say good-bye to the women, members of the Illinois-based Little Company of Mary.

Both women worked at Little Company of Mary Hospital, the medical center founded by the order more than 80 years ago.

The Rev. James Thompson, the hospital’s chaplain, said the accident was so shocking that “you couldn't stay with the grief. It jumped over to the horror of the accident.

“Today we are here to grieve. The accident was a week ago. It's no longer on the front page of the paper. We have to set the accident aside and horror, and need to be with our grief, with our loss.