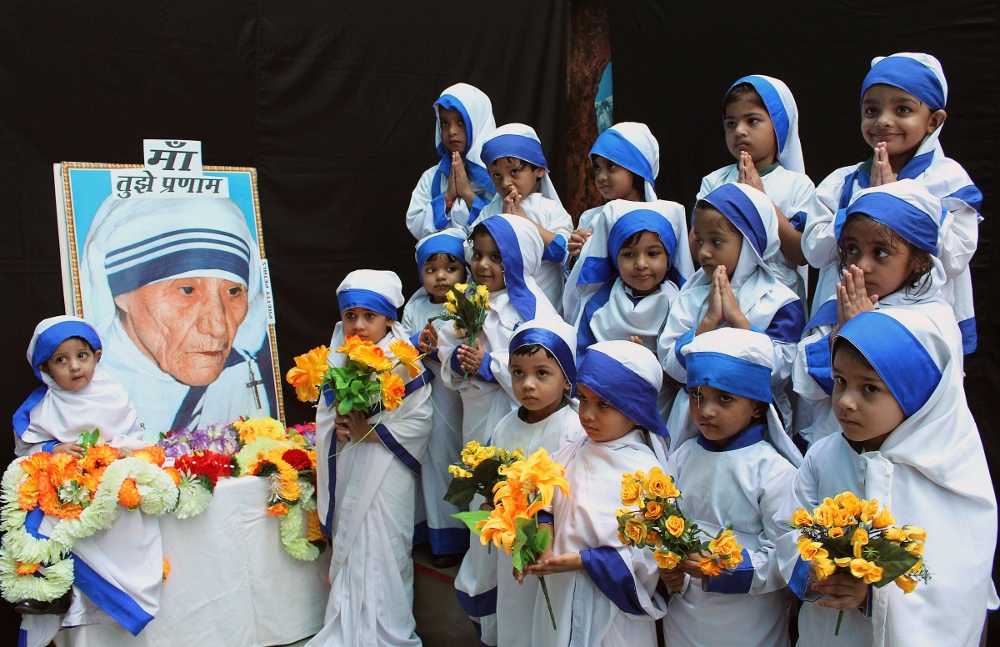 Girls dressed up as Blessed Mother Teresa during an Aug. 26, 2014 event to commemorate her 104th birth anniversary in a school in Bhopal, India. Mother Teresa was born Agnes Gonxha Bojaxhiu Aug. 26, 1910, to Albanian parents in Skopje, in present-day Macedonia. She died in 1997 and was beatified by Pope John Paul II in 2003. (CNS photo / Sanjeev Gupta, EPA)

Women religious were represented at the Academy Awards on Sunday.

“Ida,” a movie about a novice nun in the ‘60s that we have mentioned in this column frequently in recent months, won the Oscar for best foreign language film. It became the first Polish movie to ever win the award.

We start this week’s round-up with more Oscars week wrap-up.

Sky News in England delivered up my favorite story in these post-Academy Awards days: Former film star Dolores Hart, who left Hollywood to become a nun, apparently is the only woman religious who can vote on Oscar nominees.

The 76-year-old Reverend Mother presides over the Benedictine Abbey of Regina Laudis in Connecticut.

The star of 11 movies was considered the “next Grace Kelly” of her time. But she told Sky News that “God asked me another question: Would I like to become a nun?”

She tried to say no. “But he has his way of getting us to understand that to do what he wants us to do can often complete everything you want to be.”

She recalled her screen debut at age 19 in the 1957 movie, “Loving You” with Elvis Presley, and the on-screen kiss they shared.

“As we started, the director said 'Cut!' and he said to the director, ‘Wally, would you please put some powder on her ears, she's blushing!’” Hart recalled.

Minutes later, she said, the director had to stop filming because Presley was blushing, too.

There must have been something memorable about their on-screen chemistry. The two worked together again in Presley’s movie, “King Creole,” the following year.

Hart wrote of her Tinsel Town background in her 2013 autobiography, The Ear of the Heart: An Actress' Journey from Hollywood to Holy Vows.

Read more about Hart’s journey in her Abbey of Regina Laudis bio here.

A story in the The New York Times this week reports on the controversial comments about Mother Teresa made by the head of a prominent Hindu group in New Delhi.

He charged that Mother Teresa’s service to India’s poor was motivated by her desire to convert people to Christianity.

Mohan Bhagwat leveled the charge during televised remarks Monday at the opening of an orphanage and home for women in Rajasthan.

On Thursday, debate over his comments became so heated that the country’s upper house of parliament had to be briefly adjourned, according to Business Insider.

“There are no services like Mother Teresa’s here,” Bhagwat said, adding that Mother Teresa’s work had “a motive behind it – that those who are rendered the service should become Christian.”

About the women who move into the Rajasthan building, he said: “It is their question if somebody wants to convert and make someone Christian or not. But if that is done under the garb of service, then that service is devalued.”

“Mr. Bhagwat, her only motive was to serve the poor and give them love and care,” Sunita Kumar said. “For several years there was criticism, and her only reaction used to be, ‘Let’s pray for them.’”

Feel-good story of the week

Over the last few days people in Chicago have rushed to the aid of a group of sisters there in headline-making fashion.

WLS TV in Chicago and many other media outlets spread the word last week when two boilers broke down at the West Side church owned by the Fraternite Notre Dame sisters. Because all the money they raise goes to the needy, the women simply started living with no heat, sitting bundled under blankets during Mass.

Things got so cold in the building that even the holy water froze, the TV station reports.

Despite the chill, the eight sisters continued to operate their daily soup kitchen and food pantry during this monumentally cold winter.

Once their plight became public, an online fundraising campaign raised more than $200,000 in just three days to buy the women a new boiler system.

It was, quite literally, an answer to their prayers.

“As nuns, we prayed, of course,” said Sr. Marie-Myriam. “We prayed and asked God to help us and you see the results are just great, because so many people helped us.”

They plan to use the money to not only buy a new boiler but repair a leaky roof and fund the several programs they operate.

“We were very impressed by how the people react so fast. They were really concerned about our problem, and we are so happy and we are so grateful,” she said.

The Associated Press reported this week about efforts by the Congregation of St. Joseph to save the life of a man sentenced in North Dakota’s first death penalty case.

Alfonso Rodriguez Jr. of Crookston, Minnesota, was convicted of the 2003 kidnapping and murder of Dru Sjodin, a University of North Dakota student.

The congregation, which campaigns to eliminate the death penalty, is located in Rodriguez’s Minnesota hometown. The actions of the women religious have been divisive.

Sr. Pat Murphy told a local radio station that the order’s efforts on behalf of Rodriguez have been criticized even by members of her own family.

“It's a risk for me because I've never stepped out and spoken publicly on issues like this,” she told KFGO radio.

“I don't think that my little effort will change the United States government and the legal system. But I could make a difference here. And I can do that because I've got the congregation behind me and I've got the Gospel.”

Read more about the case, including the judge’s own misgivings about the death penalty sentence, here.

When Sr. Corina Padilla and Sr. Esther Calderon celebrated their decades of service at a jubilee Mass this month, the Arizona Daily Star profiled the women dubbed the “White Sisters” for the long, flowing habits that they wear.

That’s what anyone who grew up in Tucson’s Barrio Santa Rosa used to call the women. Padilla, a sister for 65 years, and Calderon, a sister for 50 years, are the last of the Eucharistic Missionaries of St. Dominic in Tucson.

Now called the Dominican Sisters of Peace, the order has served Arizona since 1939.

“I think their legacy has been a profound legacy,” Guadalupe Castillo, who grew up in the neighborhood told the newspaper.

“It is unsung in many ways, because their work was to be deeply rooted in our community . . . and to lead us in understanding how to join in issues and what that really meant. It didn’t just mean praying. It meant doing.”

Learn more about the work of these loving women here.

Sisters on the hunt in Detroit

Somehow I missed this great story in The Detroit Free Press in late January, but it deserves our attention.

The Sisters, Servants of the Immaculate Heart of Mary in Monroe, Michigan, with the help of other religious communities, are spending $16,000 to identify thousands of alumni from four west side Detroit schools.

Most Holy Trinity, Holy Redeemer, Christ the King and Gesu are the only remaining Catholic elementary schools within the city limits; at one time there were as many as 100.

The women religious are trying to locate alumni so that the schools can ask them for help in keeping the schools operating. In the schools’ heydays, the order supplied most of the teachers for the schools. None of them teach there now.

“A couple of us were talking and realized that the four elementary schools left all have IHM roots. The IHMs were staffing those schools way back when,” Sr. Mary Jane Herb, the community’s president, told the newspaper. “We wanted to see what we could do together that might help strengthen their presence in the city, knowing that IHMs have a commitment to the city.

“I think it will open up many doors. It's really going to help elementary schools, both in terms of donations and volunteer work, and board work. We hope it's a relatively small investment for a big payoff.”

"Across the entire country, elementary schools don't undertake fundraising or philanthropy. We designed this to bring some of that fundraising acumen down to the grade school level,” said the company’s director, Matt Gembecki.

“You might be interested in giving to your elementary school, but they may not have asked for it.”