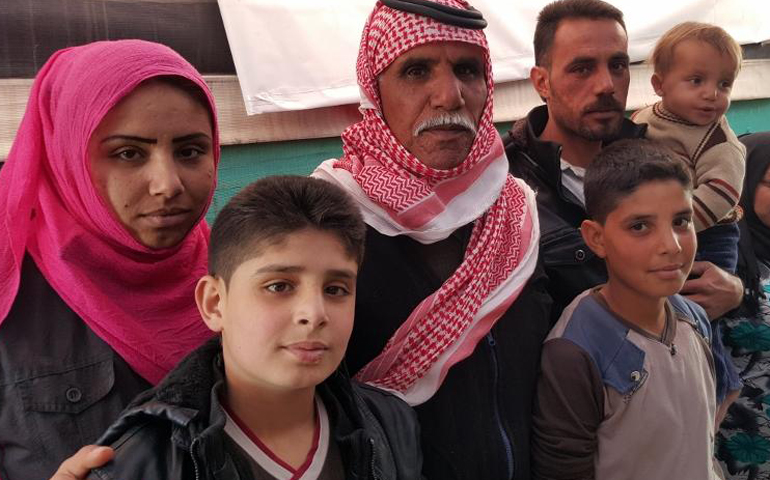 The family of Abdel Karim, third from left, who fled the city of Aleppo, Syria, in 2012 and are living, as many Syrian refugees do, in tents. In their case, they are staying not far from the city of Zahle, Lebanon. (GSR photo / Chris Herlinger)

Amman, Jordan — After two weeks of reporting about Syrian and Iraqi refugees in Lebanon and Jordan and the challenges that Catholic sister communities and others in humanitarian networks face, I learned that news about Russia's plans to start withdrawing forces from Syria is being warmly, if cautiously, welcomed by the Syrian refugees I have been meeting.

"Inshallah" — God willing — said Sitah Jadah Alkader at a Caritas medical clinic in downtown Amman, Jordan, early Tuesday morning. "I am happy to hear this news," she said. "We just want to live in peace," she said, reflecting on the war that caused her and her family to leave her country and settle in the Jordanian capital three years ago.

Like Alkader, Barihan Mousa wants to return to Syria eventually — though only when a sense of security prevails. "I definitely want to go back to Syria if it is safe," she said.

Mousa greeted the news with a smile, and said she was heartened by the announcement, but also expressed caution, hoping against dashed hopes. She came to Jordan four years ago from Damascus. "I pray every night to go back to Syria," she said. "I am homesick." Mousa called herself apolitical. "I am afraid of bombing — but it doesn't matter who does the bombing. I don't care about politics."

The announcement came as the conflict enters its fifth year and on the eve of a collective prayer for peace today (March 15) by U.S. Christian churches. The #PrayForRefugees campaign  will raise awareness in American churches by an ecumenical coalition by more than a dozen Christian groups, including Catholics in Alliance for the Common Good, World Relief, World Vision, Lutheran World Relief, Catholic Relief Services, and the Southern Baptist Convention's International Mission Board. 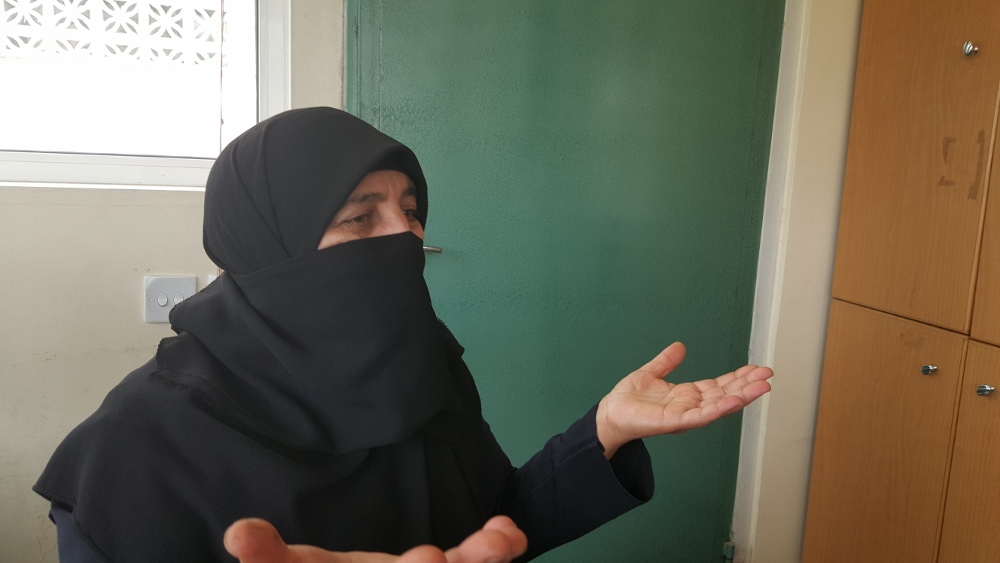 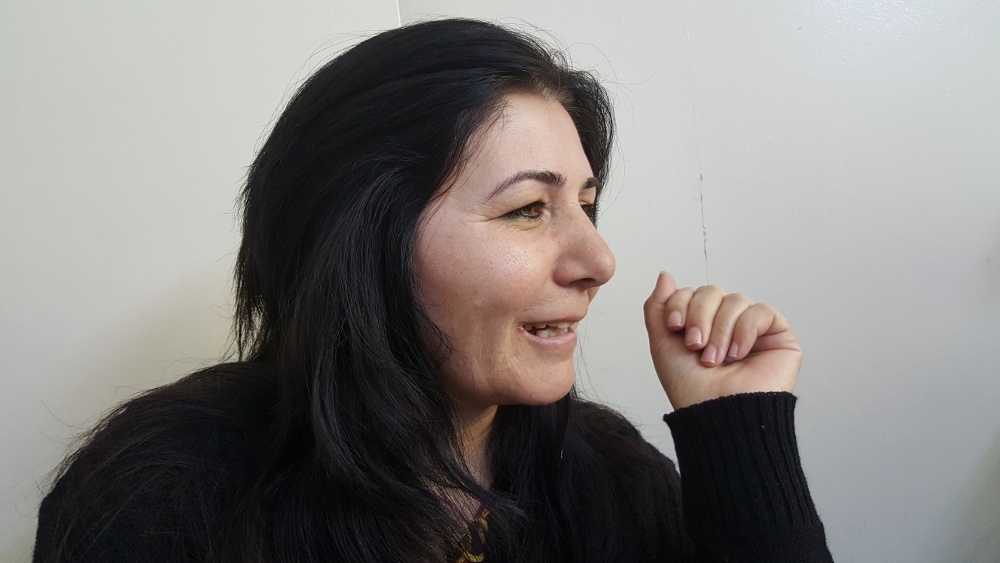 Barihan Mousa wants to return to Syria eventually — though only when a sense of security prevails. (GSR photo / Chris Herlinger)

"I fear that most people in our churches are paying little or no attention to this crisis," said David Platt, head of the International Mission Board, in a recent story by Religion News Service.

That worry is echoed in my meetings with dozens of refugees, aid workers and Catholic sisters I've interviewed, many of whom fear they and others in the region are being forgotten. Events like the collective prayer are proof that needed chains of solidarity still exist in the world.

As Dominican Sr. Maryan Kame, who works with two other sisters at the Mother of Mercy Medical Clinic in Zarqa, Jordan, told me earlier this week, she and others feel the attention of the world is not where it should be: trying to stop wars in the region. "Help us so people can live as humans," she told me.

The war in Syria has claimed 470,000 lives and displaced more than 7 million. Restoring a sense of dignity is urgently needed. Millions of lives have been disrupted — like the family of Abdel Karim, who fled the city of Aleppo, Syria, in 2012 and is living, as many Syrian refugees do, in tents.

Encamped in a refugee settlement not far from the city of Zahle, in Lebanon's Beqaa Valley, the Muslim family lived peacefully with Christian neighbors in Aleppo and now feel, as Karim puts it, that the terrors of "this dirty war" have divided people. While they await their return to Syria, the disruptions the war has caused them and others are putting even greater pressure in an already fragile region.

As many as a third of Lebanese lived below the poverty line before the war. Now with the influx of more than 1 million refugees, competition for jobs, living space and food is becoming more intense and pitched. 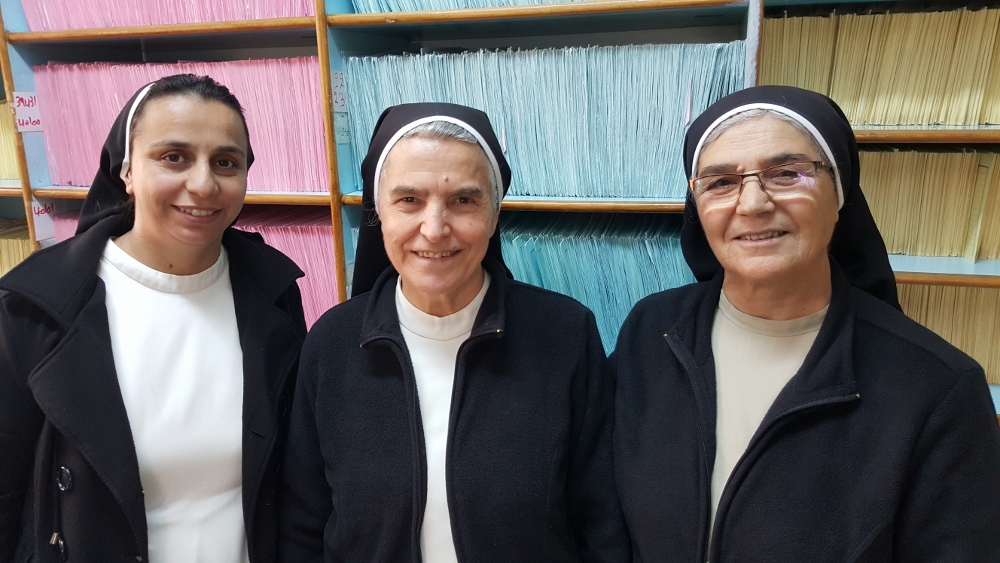 The collective prayer comes right before Holy Week and Easter. I have asked Christians I have met along the way for their thoughts about this year's Easter season. Sacred Heart Sr. Jean-Marie Channis, who directs the work of a medical clinic in Beirut run by a collective of Catholic sisters, encompasses the whole of the Middle East as she prays for peace.

She specifically prays for an end to international inference in the region and the hope that Syrians and Iraqis can one day return to their native lands. "Stop the wars," Channis said. "People are suffering. They need nothing but peace."

In much the same way, the Iraqi refugee family of Chamel Sarmad Gazgouz and Amira Hamokan Bolos, worry about the fate of Christians like themselves fleeing their countries and even the region for good.  "Peace," said Bolos. "All we seek is peace."

Perhaps the collective prayer will help the cause of peace. It certainly can't hurt.