Some 70 Catholic sisters, nearly all the heads of religious orders, have gathered in this village 20 miles southeast of Rome, in efforts to strengthen cross congregational bonds and galvanize their communities to become more effective agents for change in a world strewn with injustice and poverty.

These women have come from the far reaches of the planet, from nations such as India and Zambia, Brazil and Poland, Kenya and Togo, Spain and Lebanon, Nigeria and the United States, Canada and Mexico, to name just a few.

Each woman, in a major congregational leadership position, belongs to a local network of sisters. Each of these local networks in recent years have become increasingly woven into far more vast networks of national, regional, and global women religious networks, much of this possible because of advancing digital communications, most notably the Internet. This puts the women at the cusp of both new opportunities and challenges as they attempt to live out their vowed religious life.

Today, once isolated, women religious are communicating as never before, sharing experiences, and learning by this sharing. Yet huge obstacles, including funding, access to technologies, and even basic communication techniques, remain before them.

The potential of modern communications remains huge for shaping the future of religious life, so long segmented by geography and ecclesial histories. Even today, some basic information on religious life remains scarce. Ask the best positioned church authorities how many women religious there are today – and no one seems to have a precise answer. Some women get counted by diocesan bookkeepers, others by religious bookkeepers, still others by Propaganda Fide, the church’s missionary branch.

Best guesses have it there are some 800,000 vowed women religious working around the world, which would make it likely the largest global service network of any kind, and, undoubtedly, the one working closest among the poor and marginalized of the planet.

The women who have gathered here for one week to discuss their work, to discuss their concerns, mixing prayer and contemplation with daily meetings being carried on in multiple languages, appear to share a common understanding: better communicating will make them more effective agents for change.

The women say they are not here necessarily to create something new as much as they are to recognize what they have and to electrify it with new energy.

If the official clerical church runs a top down organization with the Vatican appointing bishops worldwide, the women religious model an alternative bottom up structure in which local congregations appoint leaders who eventually gather at global conferences to help plot futures. The former model represents the Catholic church’s linear structure; the later, represents its circular structure.

While the former has been in place for centuries, it is only in the past few decades, and in particular the past few years, this latter “networked” model is coming to new life.

How the church will better be served – or even radically changed – by countless thousands of vowed women religious coming together anew is at the core of conversations taking place at this gathering.

The women gathered here are doing so under the aegis of the International Union of Superiors General (UISG), the top network among networks of women religious globally.

Loreto Sr. Pat Murray, UISG executive secretary since last April, addressed the women yesterday expressing her view that several factors have come together recently, making it possible to inject radical new life into the organization, and, in turn, into the wider church.

She was chosen for the post, she told GSR, precisely to bring it to greater life.

“I said I would take this post, but not simply to sustain it,” she said. “I want to work collaboratively with the rest of the UISG leadership to make the organization grow. It's the right time. It's a different world and we have a new pope.”

Lacking adequate financial support and working across regional, ecclesial, and language barriers, the UISG has faced obstacles since its inception at the time of Vatican II in the mid-1960s.

Some 800 religious leaders, the general superiors of the orders, come to Rome every three years to renew their missions and set out common priorities. These meetings are supplemented by other meetings every 18 months by what’s called the “Council of Delegates,” made up of the top UISG executive leadership and representatives from 39 global regions of sisters, or “constellations” of sisters' orders.

The women at Nemi this week are here as members of the Council of Delegates.

According to Murray, the UISG is in a process of transformational change. Out of this change, she thinks, could come a much more active and communicative network of women religious leaders.

Murray has a reputation of getting things done. So when she speaks her words have special credibility. An Irish sister, she recently finished eight years of involvement in Africa, toiling in a project that came to life in 2005, called Solidarity with South Sudan. It drew men and women religious to Africa’s youngest nation as a response to a call to provide much needed health, education and pastoral services to the people there. Murray spent much of her time in South Sudan as the project’s executive director.

She lists a number of reasons why her UISG post could help invigorate the organization, even transform it in the years ahead.

Communication possibilities are being enhanced by the Internet. The UISG’s website is undergoing a major face lift. Technology is working on behalf of women who live on the edges of society.

The organization has received fresh financial support from several funding groups, including the Conrad F. Hilton Foundation which underwrote the Nemi gathering, allowing, for the first time, representatives from all 39 constellations to participate.

Finally, Murray lists her own enthusiasm for bringing UISG to greater visibility and life as one more plus.

Already, the IUSG is involved in some new initiatives, Murray told the group in a first day report. She spoke of the creation of a Council of Canon Lawyers made up of women religious canonists.

The aim of this group is to strengthen religious congregations by providing them with additional first rate legal counsel.

The UISG, meanwhile, has for several years been an organizational hub for women religious' anti-trafficking efforts. It’s Talitha Kum project coordinates 24 anti-trafficking networks of Catholic sisters who work in 85 countries.

As Murray ended her remarks here yesterday she spoke of being inspired by comments Pope Francis made in the Philippines, especially to those he made to a 12-year-old girl who had suffered sex slavery and street life. The teary-eyed girl asked Francis why God permits such suffering in the world, Murphy recalled. She recalled that Francis did not have a direct answer but went on to say that we all need to be moved to tears by the suffering of others and unless we are capable of seeing the kind of pain that moves us to tears we will not have the answers and will not respond as needed.

Murray then said: “May we members of the UISG be moved to tears and may those tears move us towards a new commitment to global solidarity where we will increasingly pray together and work together, share resources and encourage each other to go to frontiers near and far.”

Related - Women religious understand essential role of church,  with video commentary from sisters at the Feb. 2 meeting, and UISG president: 'This is God's time for us', both by Tom Fox 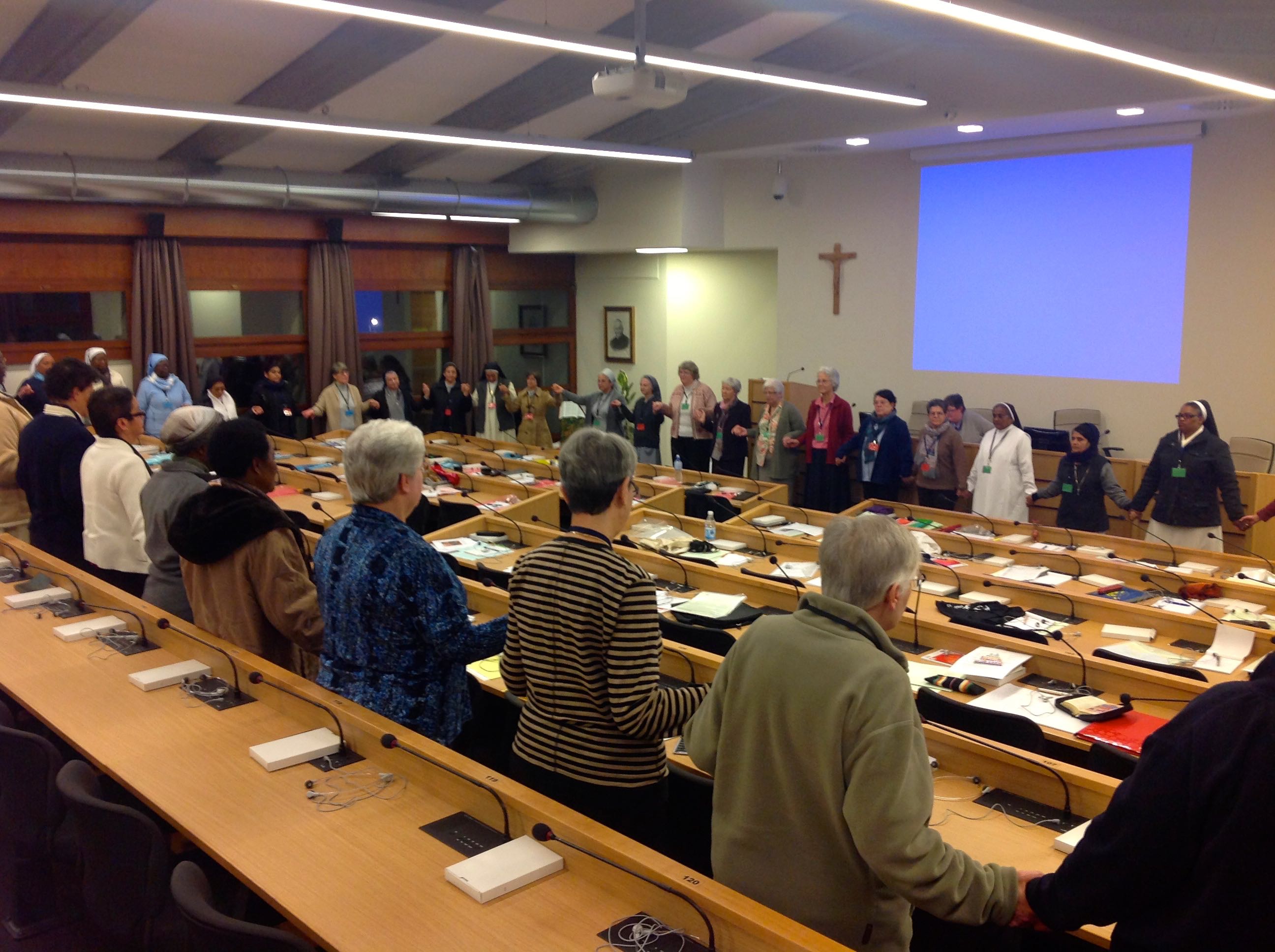 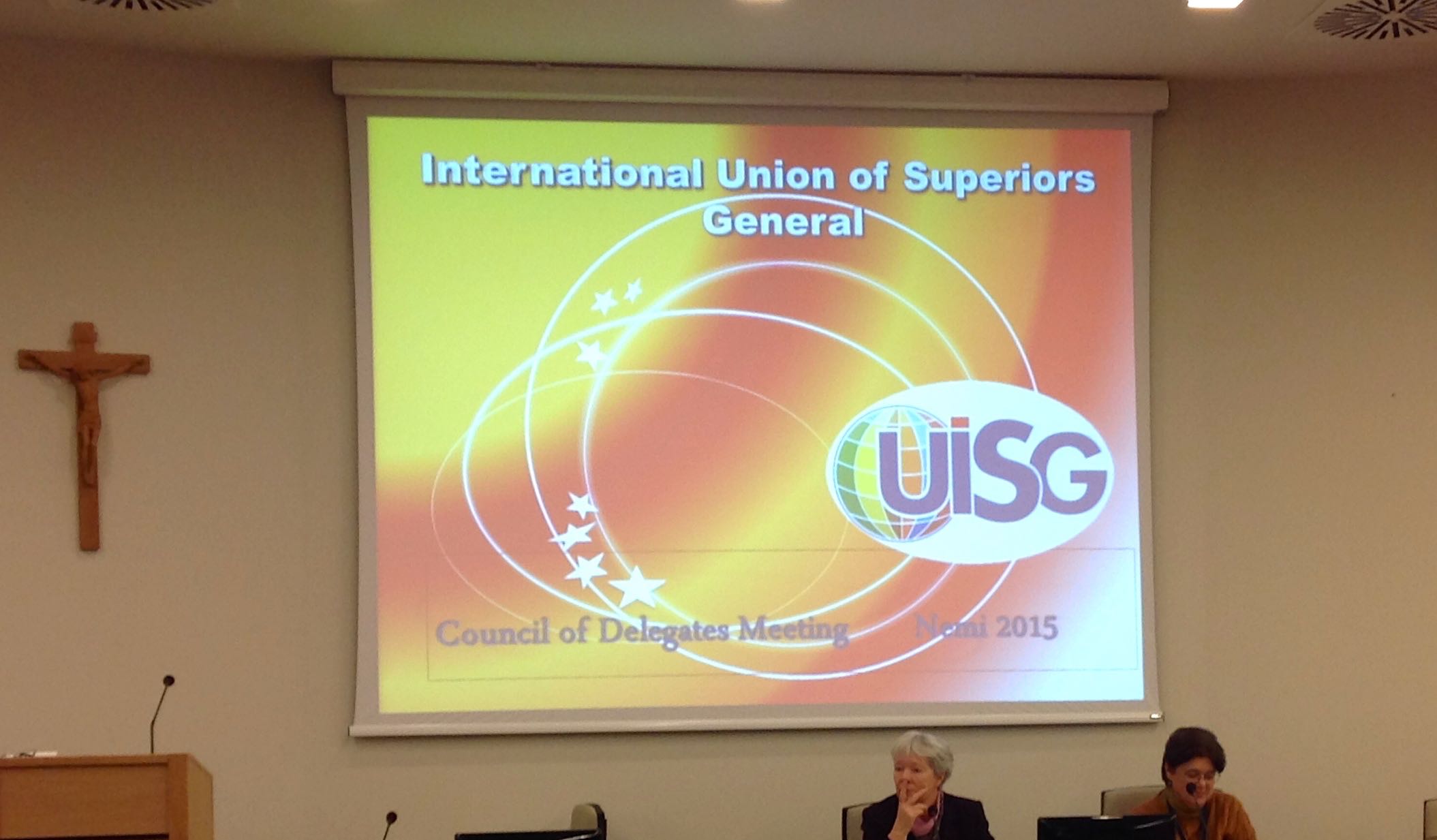 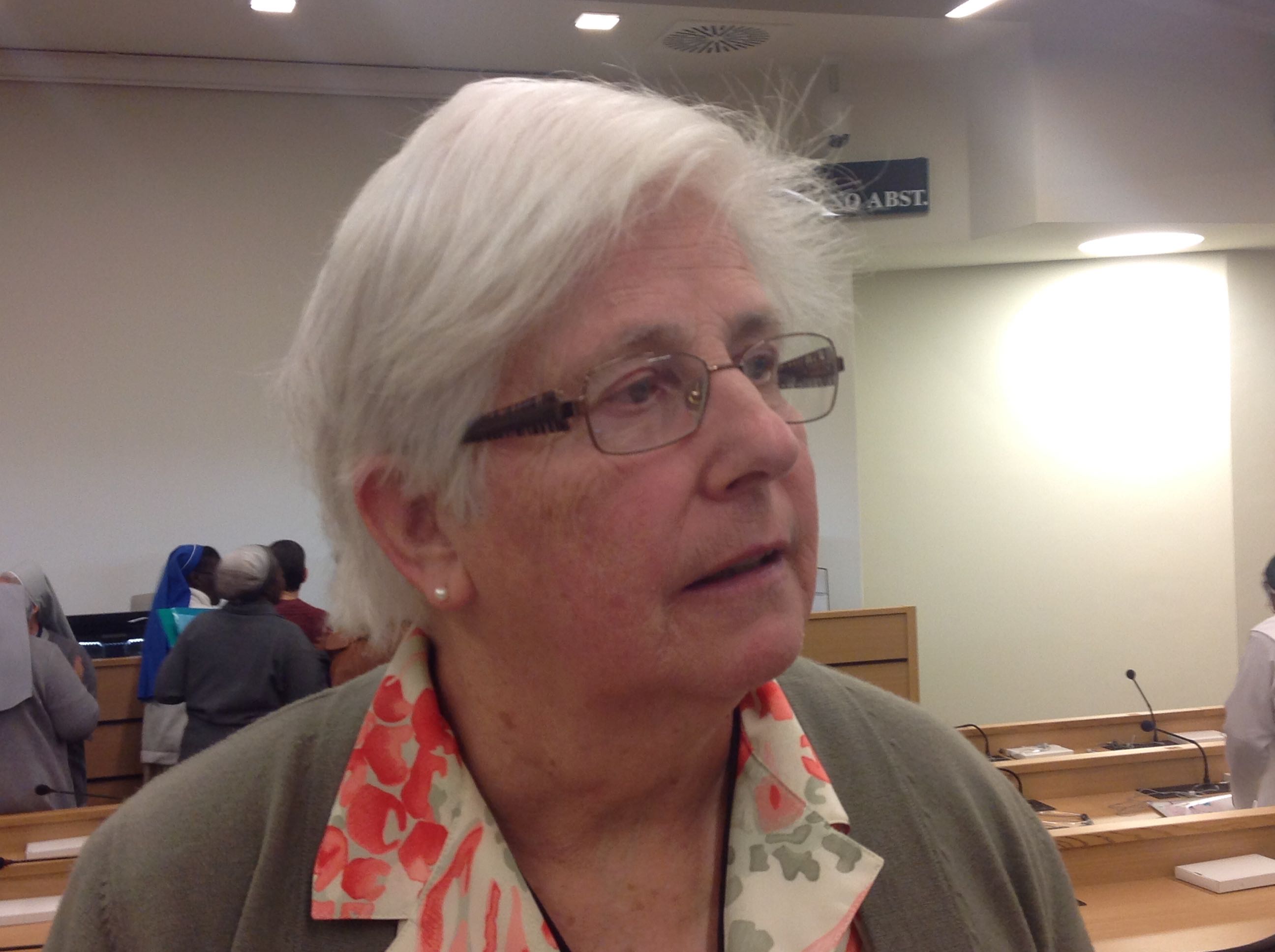 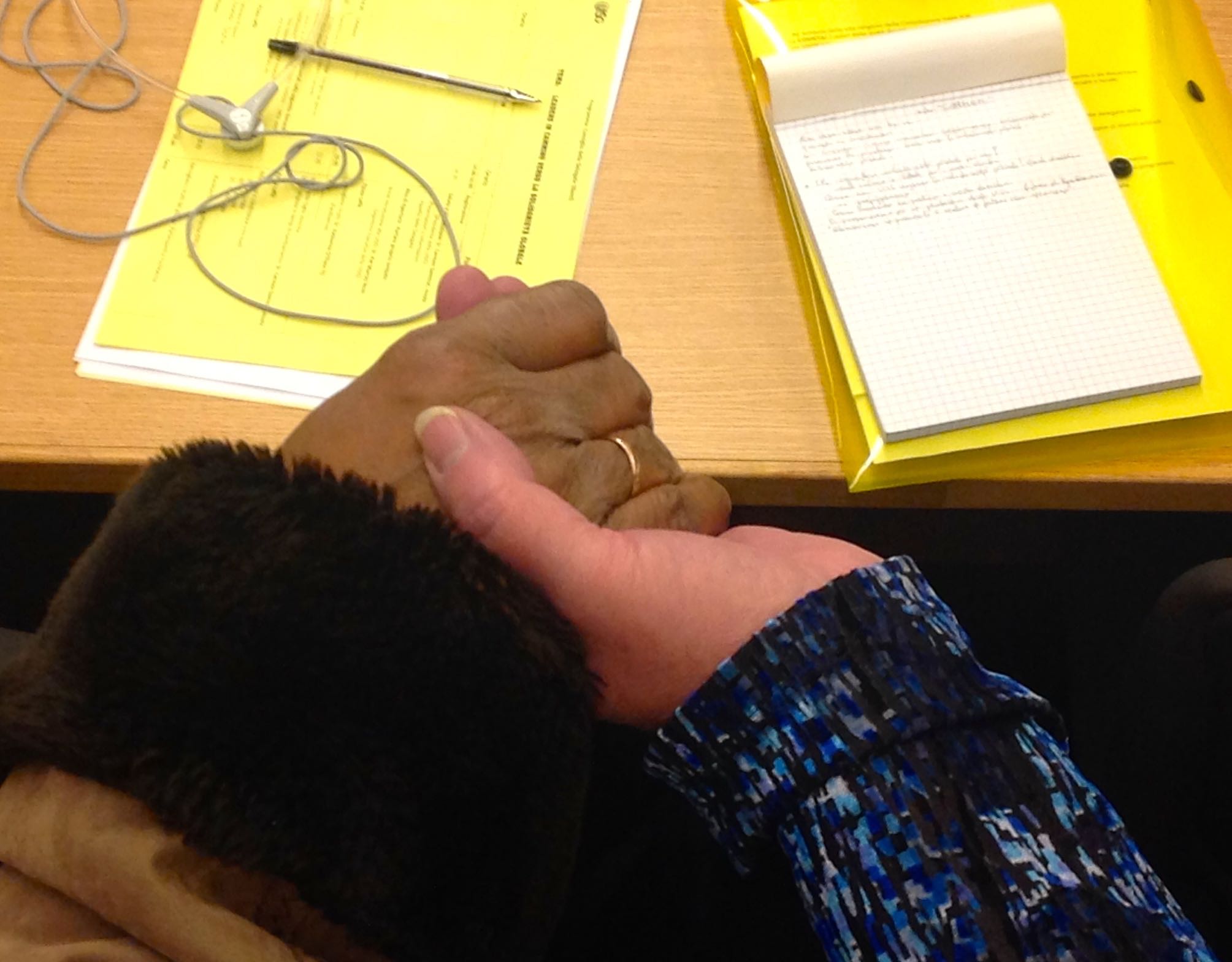