by Michele Morek
Social Justice
This article appears in the Nuns on the Bus feature series. View the full series. 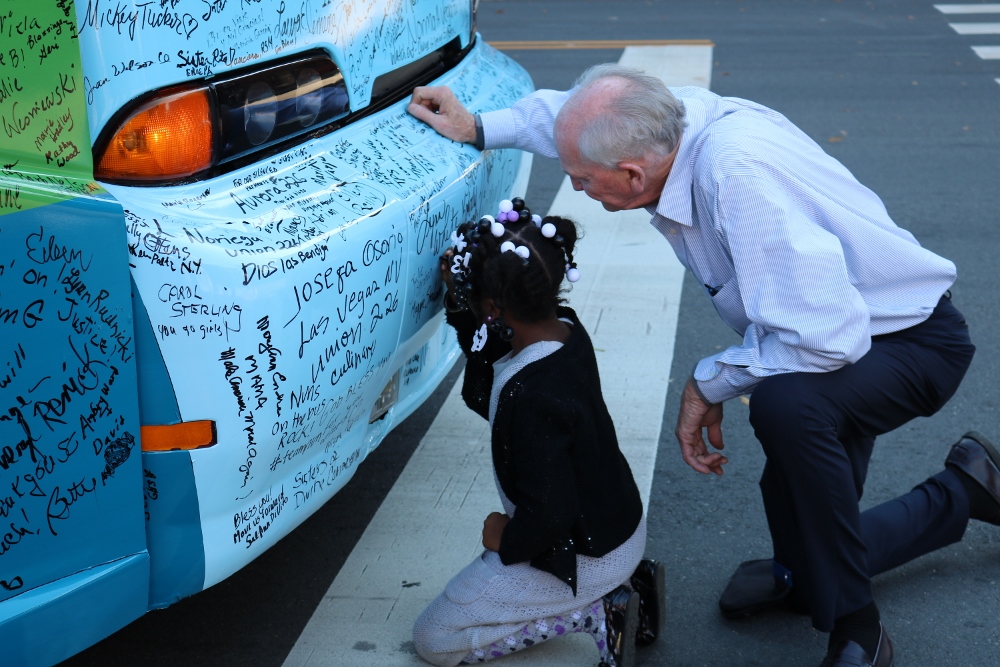 Glenn Childress, the driver for the Nuns on the Bus, helps a girl sign the bus after the Oct. 28 Nuns on the Bus rally at Maggie Lena Walker Memorial Plaza in Richmond, Virginia. (Network Lobby for Catholic Social Justice / Colleen Ross)

Richmond, Virginia — There is an old country song (really old — Gene Autry sang it) called "Back in the Saddle Again." I was singing it as we boarded the bus Oct. 28 for the journey from Washington, D.C., to Mar-a-Lago in Palm Beach, Florida.

Coming off a two-week break from the bus, I arrived pretty refreshed, but I was amazed to see Social Service Sr. Simone Campbell and her Network staff still cheerful and full of energy. One of them told me they get new energy from the weekly shifts of new sisters getting on the tour bus.

First, we gathered for brunch in Crystal City at the restaurant Jaleo, owned by the chef José Andrés, who organized food distribution in Puerto Rico after Hurricane Maria. The chef, who has 31 restaurants in North America and the Caribbean, arrived five days after the hurricane and worked with World Central Kitchen and 20,000 volunteers to serve about 3 million meals over three months.

After eating, we went out to find the bus. It was nice to see all the old-timers and Glenn the bus driver. The bus has a lot more names written all over it, covering almost every square inch until you get up to ladder height.

For about the first hour of travel, Sister Simone and her staff gave us the "Introduction to Life and Ministry on the Bus" speech and various practical directions (e.g., how to flush). We also had a Ceremony of the Beads in which we chose a bead expressing the hope we have for our week on the bus, explained our choice to the group, and put it on an elastic band around our wrists to wear the rest of the week. 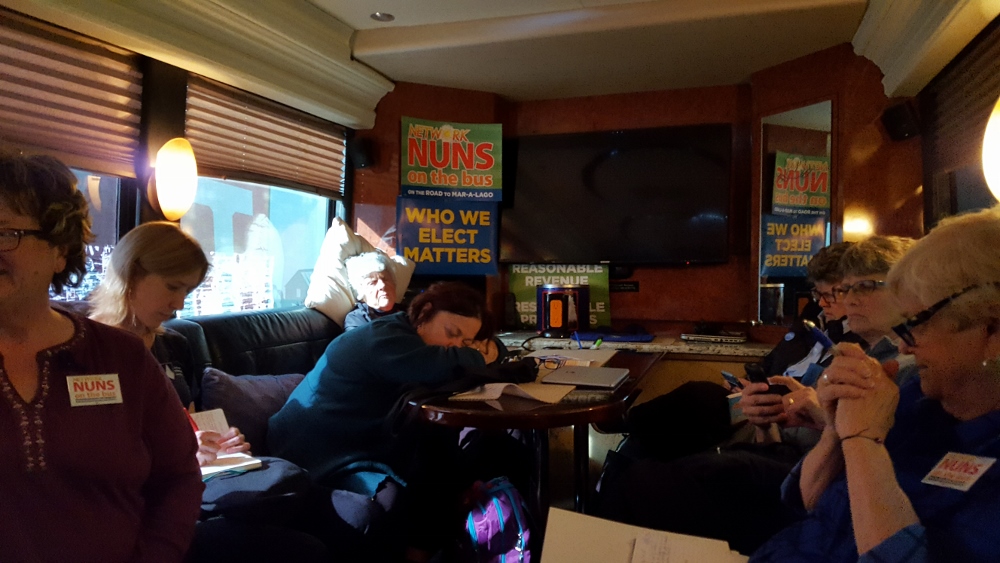 The Nuns on the Bus rest while on the road Oct. 28. (GSR photo / Michele Morek)

After that, the warmth of the bus, the big brunch, and the three-hour bus trip called for a few naps — for those us not blogging, anyway. Our first event was a rally in Richmond, Virginia. In preparation, we all filled our swag bags with the Network newsletter, stickers and the cards that participants use to sign a pledge to work for the common good (a completed card gives one the privilege of signing the bus!) and headed out to meet the rally participants.

The rally was in a public plaza beneath a statue of Maggie Walker, the nation's first African-American female bank president. She chartered the St. Luke Penny Savings Bank of Richmond, which helped black people rise out of poverty after the Civil War. The next year, her newspaper, the St. Luke Herald, incited a two-year boycott of Richmond's segregated streetcars. 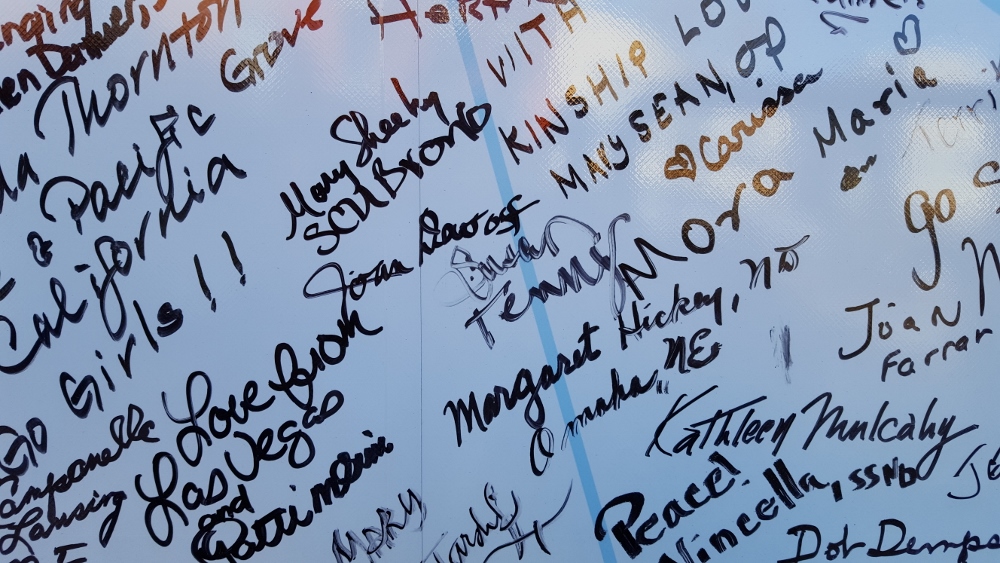 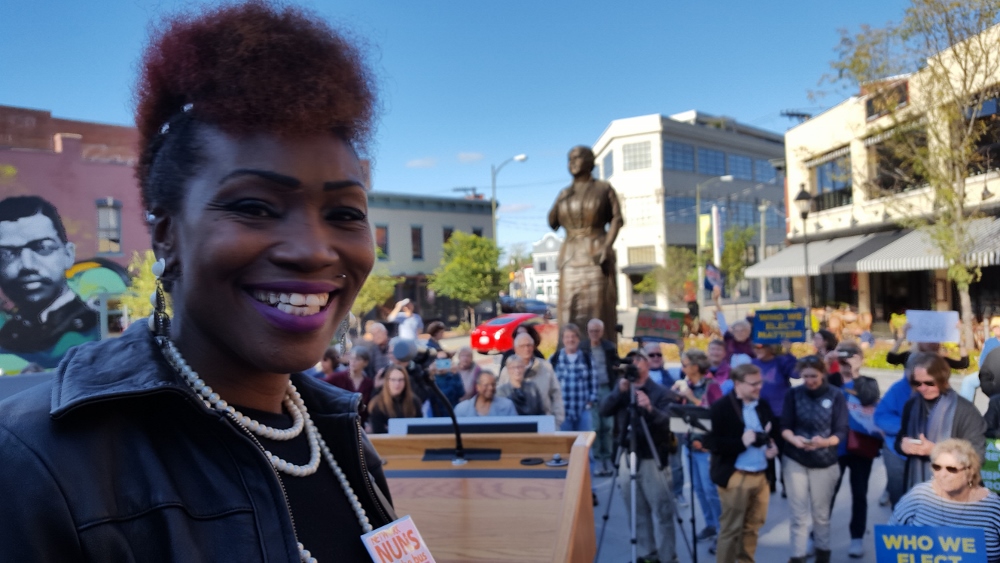 The crowd of about 75 was very receptive. After an invocation by an Episcopal priest, one of the nuns, Dominican Sr. Quincy Howard of Network, gave an introduction to the Nuns on the Bus. The mayor of Richmond, Levar Stoney, then spoke eloquently of what good leadership looks like, followed by the Rev. Jeanne Pupke of the Unitarian Universalist Church, a former Immaculate Heart of Mary sister, who talked about the current tax policy as the "mother of all inequality."

Jackie Short, a black activist, entrepreneur and speaker for the Fight for $15 movement, spoke for a fair minimum wage, and Ali Faruk spoke of housing and business federal programs as investment in people. Former congressperson and political activist Tom Perriello praised the Nuns on the Bus and spoke of how the budget reflects our values. Finally, Sister Simone worked her usual magic on the crowd, convincing all that it is "we the people" who are responsible for the course of our democracy.

As always, I was struck by the hope in the faces of the people present, as if we were a roving team of cheerleaders who confirmed them in what they believe and value, who gave them a chance to get together with a group of like-minded people, and who provided a group of inspirational speakers from their own area who could speak to issues of concern to them. 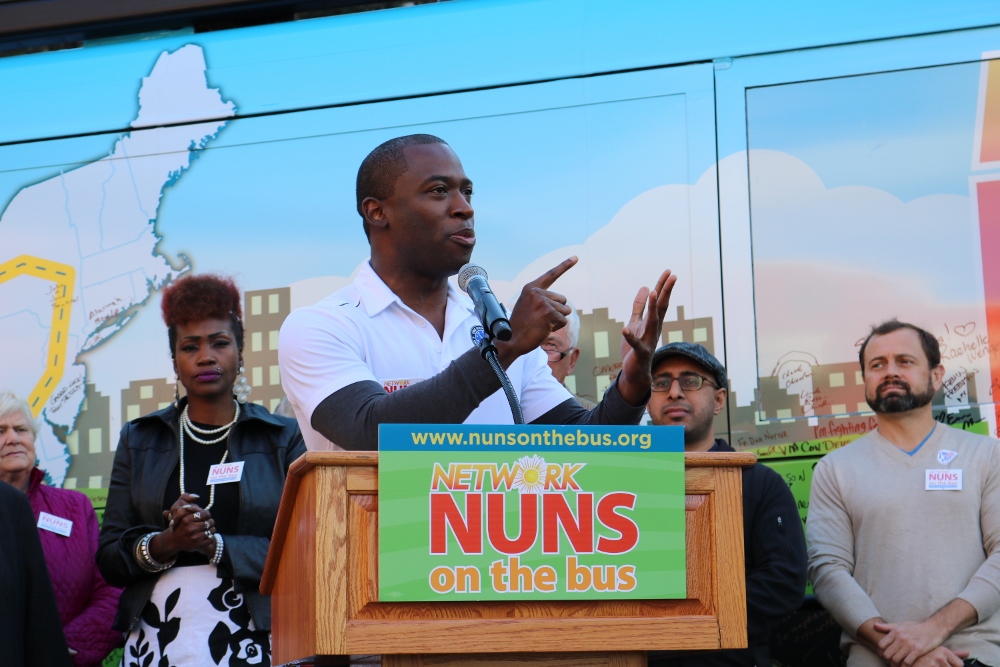 And now what you have been waiting for: introducing this week's Nuns on the Bus!

Social Justice | Nuns on the Bus 2018: The last week of the trail to Mar-a-Lago