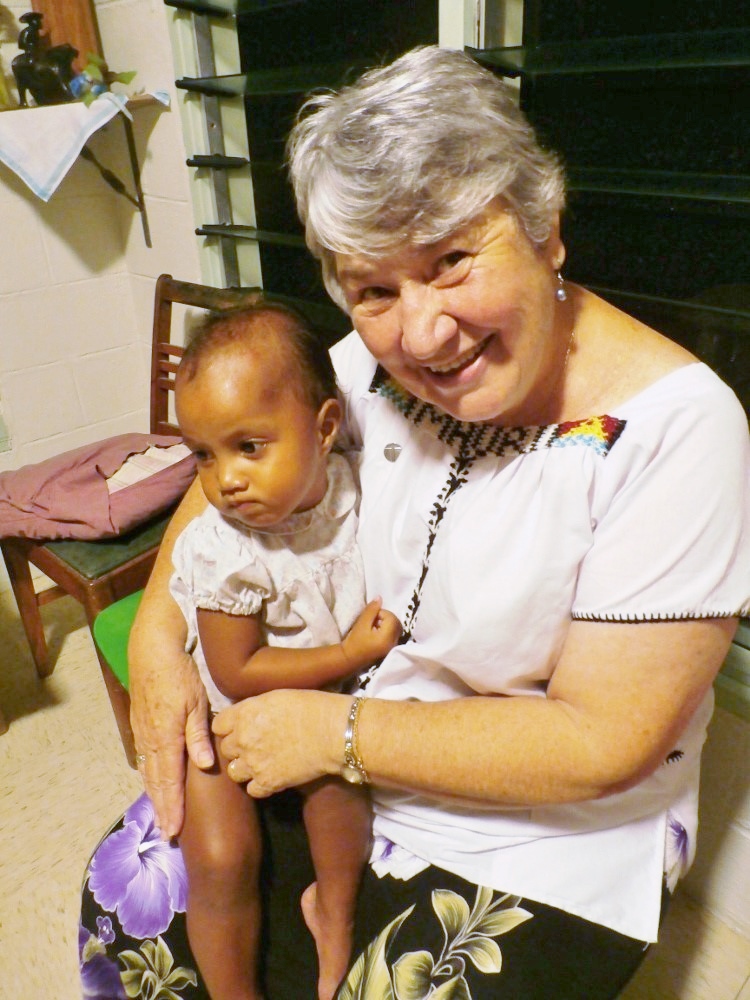 Geraldine Kearney, a Sister of the Good Samaritan of the Order of St. Benedict, has spent the last several years educating people in Australia and throughout the world about the impacts of climate change on low-lying islands in the Pacific.

After spending years as a teacher and principal in Catholic primary schools, Kearney became the principal of an all-aboriginal school on Palm Island, about 30 miles off the coast of Townsville, North Queensland, Australia. From the aboriginal people she taught and worked with, Kearney says she learned unforgettable lessons about "culture, relationship, mutuality and respect."

Then, in 2000, Kearney went on assignment to Kiribati, an island in the central Pacific. There, she taught at the Kiribati Pastoral Institute and worked as a member of the formation team for young Kiribati sisters.

It was in Kiribati that Kearney, who has a doctorate in ministry with a concentration in intercultural ministries from the Catholic Theological Union in Chicago, first became aware of the increasingly dangerous impacts of climate change and the severity of those effects on the beautiful but vulnerable islands of the Pacific. When she returned to Australia in 2005, she became involved with the Pacific Calling Partnership, an organization dedicated to educating Australians and all people about how climate change affects its island neighbors.

GSR: What are some specific examples of the effects climate change is having on low-lying islands in the Pacific today?

Kearney: There is evidence of the growing scarcity of clean drinking water and, for some, threats to loss of food, food sources, and sustainable living. Other issues are rising sea levels, increases in water-borne diseases and destruction of crops.

How is that impacting citizens?

At recent United Nations talks, leaders from the Pacific Islands spoke bravely of their countries' needs and fears. Manasseh Sogavare, prime minister of the Solomon Islands, spoke to the U.N General Assembly in October. According to the U.N.'s report, he highlighted the fact that 'Solomon Islands tourism, fisheries and the livelihood of 85 per cent of its people are at risk from ocean acidification' and that 'sea level rise already has seen land inundation, loss of biodiversity, threat to food security and the resulting relocation of populations from low lying islands to other parts of the country.' In a 2012 U.N. meeting President Anote Tong from Kiribati said he is realistically preparing his people to upskill so that they 'have the option to migrate with dignity should the time come that migration is unavoidable.'

What measures is Australia taking to pay back its 'ecological debt' to the island states?

There is some action on the political side. For example, I am cautiously optimistic that [Australian] Prime Minister Malcolm Turnbull's presence at the U.N. climate change conference in Paris this week will be more than a presence and that he will listen and act. I am also heartened that Bill Shorten, leader of the Australian Labor Party, and his deputy, Tanya Plibersek, and immigration spokesman Richard Marles will embark on a four-day trip to low-lying Pacific Island nations, to Papua New Guinea, Kiribati and the Marshall Islands, this month. Greens Sen. Larissa Waters is calling on Labor to show action by 'heeding the islands' calls for a moratorium on new Australian coal mines,' according to The Austrailian.

We are at a tipping point. Australia has pledged unconditionally to reduce our emissions by 5 percent below 2000 levels by 2020 and up to 15 percent by 2020. I believe that the international community is ready to say, 'Enough is enough.' We cannot continue to deplete the Earth's resources and travel unheedingly along this path of destruction. The time is now to be catalysts for transformation to take responsibility for the destruction that is being caused, especially at the expense of the poorest and most vulnerable. I believe that the international community needs to recognize the strong links between human rights and climate justice and that the way forward is about providing sustainable development that is inclusive of sustainable goals for the rights of these small island states.

You mentioned that some island residents may need to prepare themselves to relocate in the coming years as a result of global warming. From your own cultural perspective, how does the question of possible loss of identity and culture that goes with the challenge of resettlement impact you?

I was born in Rangoon, Burma, of Burmese-Celtic parents, not far from the beautiful Shwedagon Pagoda, a reminder of my Buddhist heritage. After Burma won independence from the British in 1948, it was timely for many of cross-cultural heritage to migrate from Burma. This was not easy for our family. I know to some degree what it is like to struggle with a loss of land, language, culture, and identity and the pain of resettlement and challenges of growing up in another culture. I watched my parents cope with the lack of recognition and acknowledgment of their professional status. This gave me compassionate insight into the demands of resettlement in another country.

I treasure the identity I have with my birthplace, the land, the language, the traditions, the ancestral burial sites. I feel strongly for anyone who is forced to leave their homeland, especially now through the lack of vision of countries who are major emitters of greenhouse gases. It is not only the loss of land that impacts heavily a person and a nation. It is the loss of their relationship to the land, their identity, their culture, their heritage.

May we, each of us, take up the moral challenge of Pope Francis in Laudato Si': "Intergenerational solidarity is not optional, but rather a basic question of justice, since the world we have received also belongs to those who will follow us."

[Georgia Perry is a freelance writer based in Oakland, California. She has contributed to several print and online magazines, including The Atlantic, CityLab, Portland Monthly and The Portland Mercury. She was formerly a staff writer at the Santa Cruz Weekly in California. Follow her on Twitter: @georguhperry.]

Q & A with Sr. Laurie Brink on the relationship between science and theology

Q & A with Sr. Agnes-Claire Koh, providing shelter for women and children in Singapore