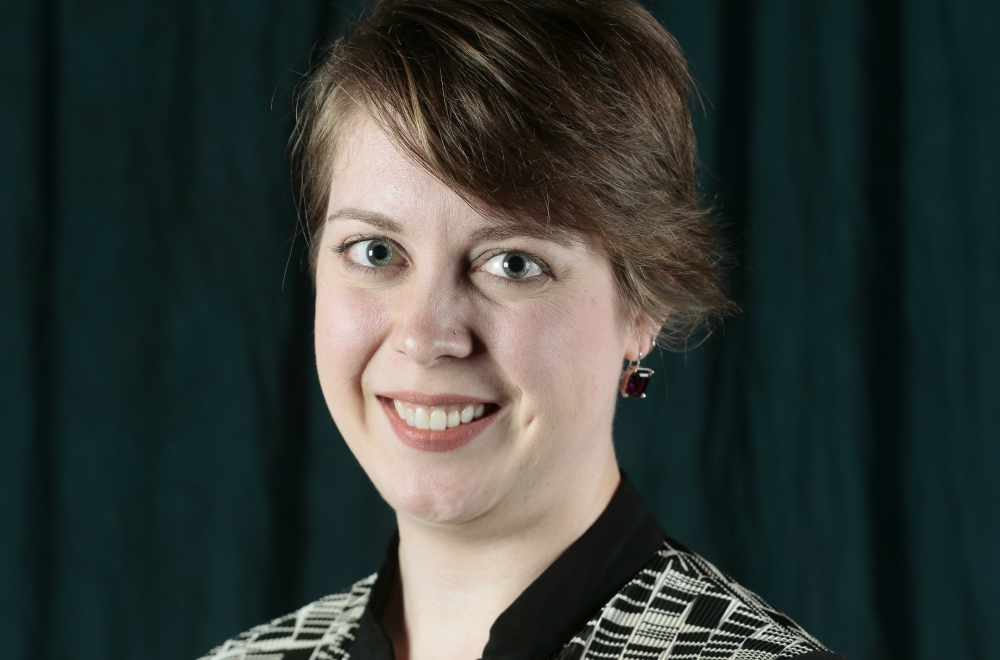 When Emily Kahm began her doctoral program at the Iliff School of Theology and the University of Denver in 2011, it marked the first time in her life that she wasn't being educated at a Catholic institution. And yet, it wasn't until she'd completed her doctorate that she says she made any real connections with women religious.

Fast-forward eight years, and Kahm is now finishing up a two-year teaching fellowship at Augustana College in Rock Island, Illinois, where she teaches — among other things — an upper-level course in American Catholicism that is centered around the work of women religious. In the course, her students are required to interview a sister and turn that interview into a nine-page paper.

Kahm spoke with Global Sisters Report about her evolving relationship with women religious and what she's observed as her students are introduced to Catholic sisters, often for the first time.

GSR: The course you teach is American Catholicism. How did you wind up making it about women religious? Was that an intentional choice?

Kahm: So, Augustana is a Lutheran school, and they haven't had someone who was able to teach Catholicism in quite a while. I'm a temporary fellow and they just said, "You can take this class. Do whatever you'd like with it."

Initially, I was very overwhelmed by the idea that I'd have to teach a Catholic theology course. All of my other teaching has been more pastoral or more broad than just Catholicism. And I kind of realized, there's no reason I have to teach just theology. In fact, that sounds really boring and I think my students would be bored. So I kind of went back to, what would I love them to get out of it?

Well, I wanted it to be a feminist theology course, because that's how I approach a lot of things — always looking for the voices that are left out and folks on the margins. And I wanted there to be some sort of experiential part of it. And when I started looking in text, it just kind of hit me one day. I said, "We could do this entire class based around what women religious have done." Because when you look at the Catholic Church in the United States, you have a theology that's interesting and whatever, but if you want to know what the people are doing — like, people in the pews — it's usually women religious who are with them.

The vast majority of my students are not Catholic, and most of them have very little contact with religion, regardless. So I've always thought, if I can teach them what religion is like as it is lived out, that's going to be a lot more useful than them knowing doctrine. And, so far, it seems that they prefer it [laughs]. As do I. It's more interesting. 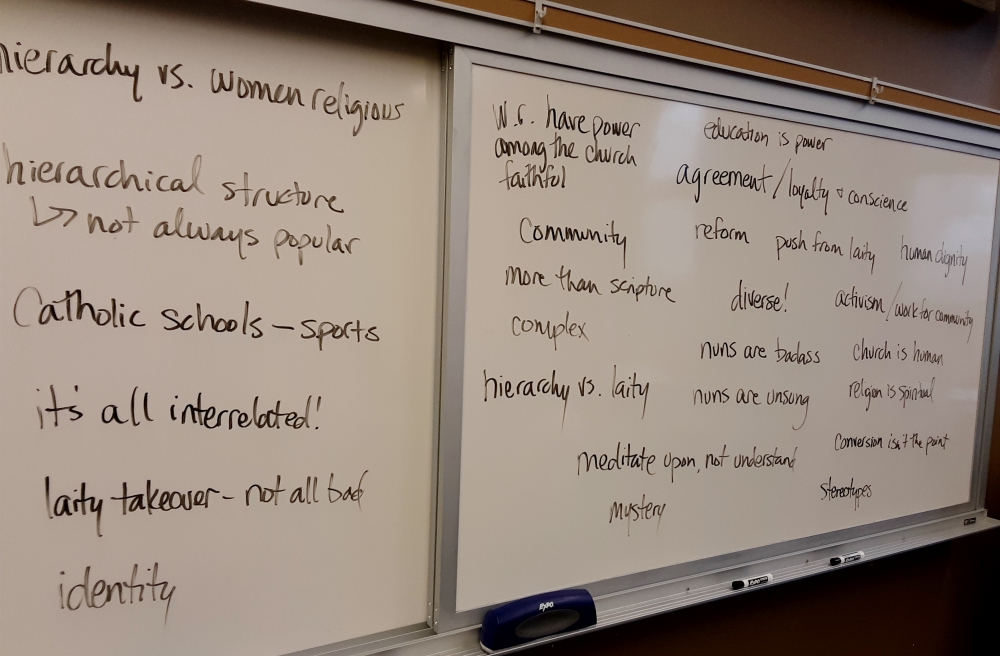 In your course, you've identified five major areas where sisters have made contributions in this country: immigration, health care, education, social services/advocacy, and environmentalism. How did you choose those areas?

I knew I needed to do education, and I knew I needed health care because I knew those were places where women religious were really at the forefront. When I started to look at resources, especially about migrant people on the move, I kept realizing it was women religious who are doing so much of this work. So that's how I start my course, because I think it sort of interrupts people's ideas about women religious. Like, "Oh, they just sit in chapels and pray all day." And so I like to start with kind of a "No, they're super activist-y — in fact, in really specific ways."

I feel like starting with the immigration issue — which a lot of students know something about, but very few of them have really deep political or moral issues with — it's a great example of Catholicism, which, at its heart, is about recognizing that every person that you could possibly meet is created in the image and likeness of God. And women religious seem to do that so much better than, you know, just your standard, average Catholic.

Advocacy and social services grew out of so many other things; I kept finding [sisters] doing interesting activism work that I couldn't categorize in another way. So, you know, Nuns on the Bus and doing foster parenting and that kind of stuff.

But the environmentalism one, where we're at right now — I've been intrigued at how students find it very unexpected that women religious have such concern with environmentalism or feminist ecology. And yet, I can point them to congregations that are very nearby who make that a huge priority in how they live their lives in a monastery.

What have you noticed in how your students' thoughts and perceptions change from the start to the end of the class? I mean, these are young adults at a Lutheran school.

There's such an intimidation factor when they start the class. Most of the students I teach are not religion majors; they end up in this class sometimes because they know me or sometimes just because it fits in their schedule. They come in the first day of class and just assume that it's going to be memorizing theology or Bible stuff, so they get a little more excited when they realize that it's a lot more practical than that.

But then I start talking about women religious, and they are baffled [laughs]. Most of them have never met a woman religious. And then when they find out they have to actually talk to one, you can just tell they're terrified. Like, in a good way: They're not all dropping the class all of a sudden, but they really have this sense of "These are people that are so different from us and they live a life that I will never understand." You almost feel like you're sending them to a different country in a language they've never spoken before.

As soon as they actually start doing interviews, I start getting emails, comments, all of them just come up to me with these bright, shiny eyes saying, "This was so much fun." I tell them to aim for a 30-minute interview, but one student came back and said, "I talked to her for four hours. She wanted to show me the monastery. She invited me to join them for liturgy. I wasn't sure what I should say, but I did and it was wonderful."

Another one of my students, who had done her interview over the phone, told me that she's planning to take a road trip to visit her woman religious the next time they're both free. She said she'd been invited and felt like going to visit was the least she could do after the great conversation they had. 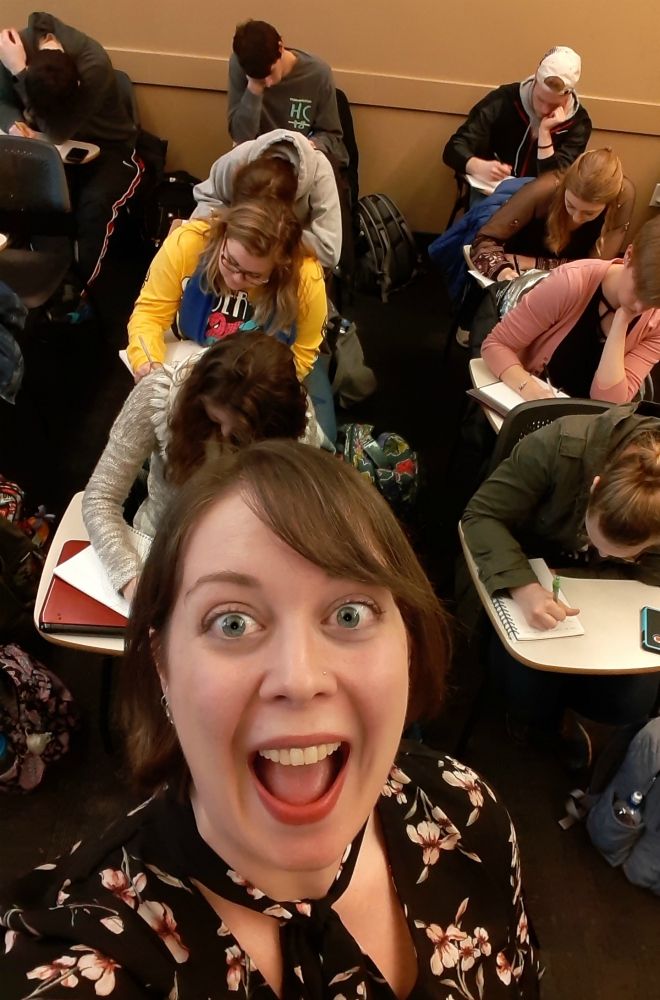 Your fellowship ends this year. What's next for you?

I've actually just accepted a position at the College of St. Mary in Omaha, Nebraska. So I will be joining them as an assistant professor of theology and, [laughs] probably not coincidentally, it's a Sisters of Mercy school. I got to talk about doing this project while I was interviewing, and I feel like it was such a fun way to connect and to talk about how I do understand the idea of a charism or a mission.

In terms of projects, I'm really hoping I'll be able to carry this one forward. I'm not entirely sure if it will ever become something that I personally publish or if it's always going to be something I encourage students to do. All of these papers that the students write, they condense it down to a couple of really interesting things they learned, and we publish it on Digital Commons. So it's available. It's readily Googleable for anyone who's interested. And I kind of love that I can be a little part of women religious' story.

But certainly, anytime I teach, I'm going to be going back to how can I get my students to go into a situation they're a little bit uncomfortable with, meet someone they otherwise might not have met, and use that as a primary learning text for the course. How can I get them out of a textbook and into the world that's more complicated?

[Dawn Araujo-Hawkins is a Global Sisters Report staff writer. Her email address is daraujo@ncronline.org. Follow her on Twitter @dawn_cherie]

Q&As | Q & A with Emily Kahm, a theology teacher with a focus on sisters

How do you encounter Christ in the people around you?

Seeds of transformation: Effects of the apostolic visitation

Looking back at social cooperation between Vietnamese sisters and government authorities