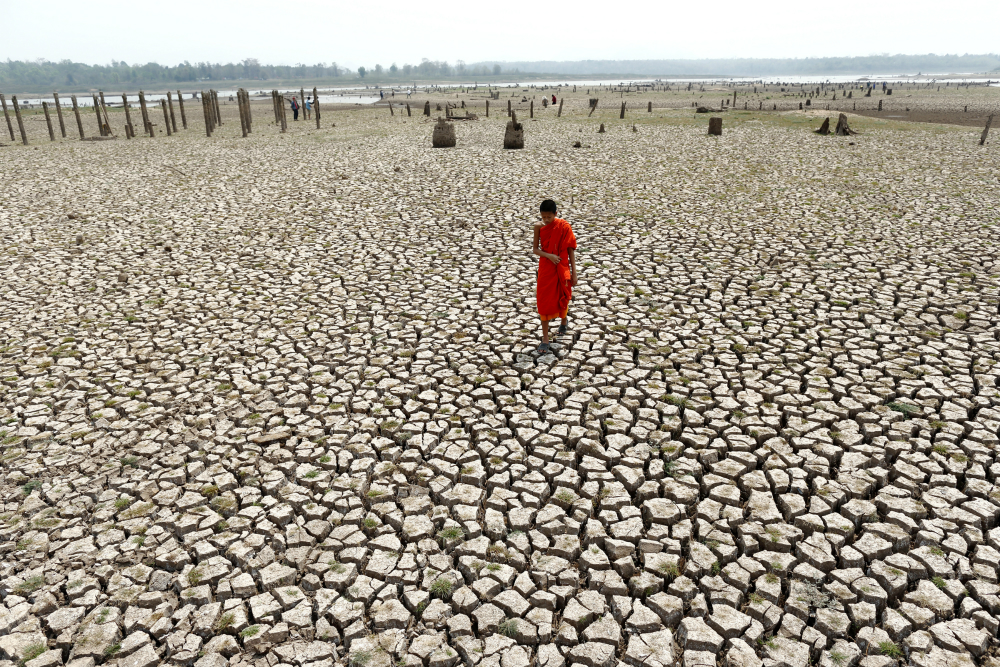 I recently returned to live in the United States after six years in Nicaragua, where I had become accustomed to irregular water service — or rather, the regular stoppages in water service. During the dry season and much of the rainy season, our water would go out in the morning and stay out until sometime in the afternoon. We'd considered ourselves fortunate, though — other barrios in the nation's capital only had water service for a couple of hours in the middle of the night. Meanwhile, in many rural communities, wells had gone completely dry.

I watch what's happening with Earth's water, and I alternate between wanting to cry in sorrow and scream in rage. Bolivia lost its second largest lake last year when Lago Poopó completely dried up, taking with it the fish, birds and other wildlife the Uru-Murato people used to depend on for their own survival. What does a traditional fishing culture do when there are no fish, when there's not even water?

I hear about Flint, Michigan, and Valle de Siria, Honduras, where the water itself — the very thing that is supposed to give life — has become a poison, sickening thousands and causing damage that will reach into the next generation.

I follow reports on the disappearance of the Aral Sea in Uzbekistan — which only a few decades ago was the world's fourth largest inland body of water and is now practically gone due to the avarice of just a handful of people insistent on cultivating cotton in a part of the world whose climate was never suitable for such a thirsty crop. How can such a miniscule group cause so much destruction?

I read about Lake Turkana in Kenya — the world's largest desert lake, which is at risk of drying up due to the construction of a massive hydroelectric dam 100 miles upstream. I can't even wrap my mind around bodies of water of that size simply disappearing.

I pray with Laudato Sí and find myself drawn over and over again to paragraph 14, which, in English, states, "Regrettably, many efforts to seek concrete solutions to the environmental crisis have proved ineffective, not only because of powerful opposition but also because of a more general lack of interest."

In the Spanish version, the same paragraph says, "Lamentablemente, muchos esfuerzos para buscar soluciones concretas a la crisis ambiental suelen ser frustrados no sólo por el rechazo de los poderosos, sino también por la falta de interés de los demás." (Translated: "Regrettably, many efforts to seek concrete solutions to the environmental crisis are usually frustrated, not only because of rejection by the powerful, but also because of a lack of interest among the rest.")

Efforts have been frustrated by bottling companies that buy entire aquifers right out from under municipalities; they've been frustrated by the mining/extraction and petrochemical industries that show no motivation whatsoever in developing new techniques for accessing and processing raw materials that don't involve contaminating millions of gallons of ground water and/or dumping toxic residue into the nearest stream or river; they've been frustrated by the owners and managers of mega-farms who continue to use what limited water remains to grow cotton, sugarcane, tobacco, alfalfa and other water-intensive crops in parts of the world whose climate is no longer (or never has been) able to support them; they've been frustrated by energy corporations that have no qualms about building massive ecosystem-destroying dams.

Unlike in either version of Laudato Sí, however, I don't see a "lack of interest" — in me or in anyone else. What I see and experience is a sense of powerlessness, a feeling of being overwhelmed, a fear of being swallowed alive by forces far beyond what the average person can control.

We live in a world where money is power and where the accumulated wealth of 67 individuals is greater than the assets of 3.5 billion other people combined; where the laws are made by the powerful, for the powerful; where politicians are bought and sold; where lethal force is all-too-often an acceptable tool to use against protesters, environmentalists, human rights workers or anyone who has the audacity to question the status quo.

I think the main challenge isn't getting people (or me, for that matter) to care — it's to convince us that what we do really does make a difference. It's hard to persuade a poor farmer to fix her leaky faucet when the mega-producer down the road is also wasting water — not by the drop, but by the millions (billions? trillions?) of gallons and doing so because it costs less money to drain an entire water table and dig a new well than it does to revamp the system and introduce more efficient irrigation techniques.

I've been inspired by the Standing Rock Sioux Nation, the Guardians of Yaoska in Nicaragua, and the Rak Chiang Khong group in Thailand and continue to look to them for guidance — individuals and groups of people who are willing to risk everything to protect and defend their water sources. I pray that I may someday be "there" — that I may be willing to put myself on the front line to protect the very thing that keeps us all alive, to protect the right of all of us to at least survive, and to protect the holy gift that God has given us.

[Kari Pohl is a Sister of St. Joseph of Baden, Pennsylvania, who had been serving in Nicaragua until December 2016 in the fields of community health education and pastoral ministry.]