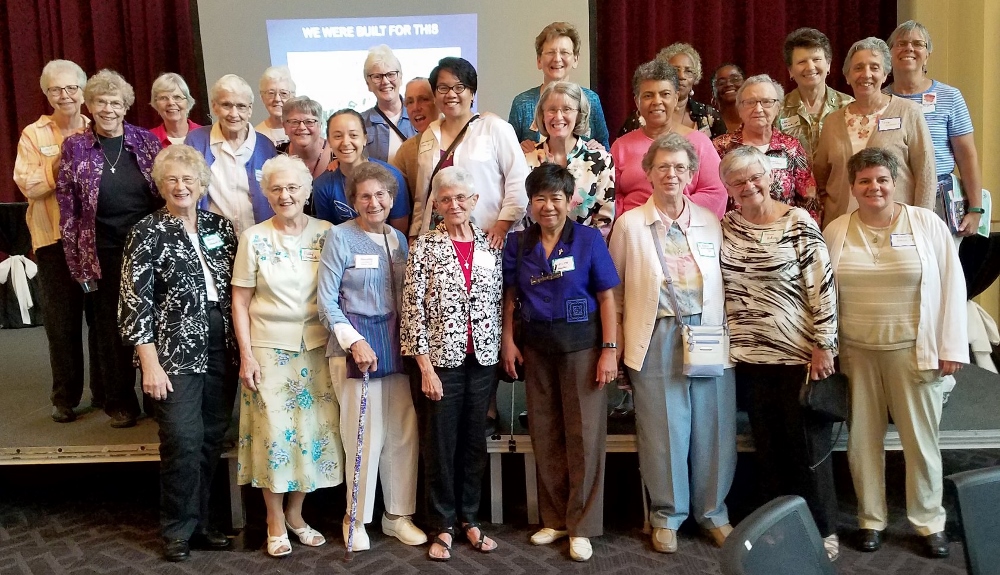 The Sisters of Providence and Providence Associates pose together Aug. 18 at the celebration closing of the 8th Day Center for Justice, Chicago. (Provided photo)

I can still see where we were sitting — Sr. Kathleen Desautels across from me at the big dining room table as light streamed into the convent at Maternity BVM in Chicago's Humboldt Park. It was the second day of my first ministry visit as a postulant in 2014, and I was thrilled to find myself one-on-one with our community's very own 5-foot-2 social justice giant.

Kak, as many of her friends call her, was someone I had met and heard tales about. I knew her as the sister who had spent time in prison for crossing the line in a protest at the School of the Americas, a military training school known for graduating perpetrators of hundreds of human rights abuses throughout Latin America. But I never had the chance for a real conversation with her until that morning.

She started by asking about how the year was going for me, and I shared some of the challenges of the transition, of navigating differences in community life. She listened thoughtfully and offered some helpful feedback.

Then Kak began to share moments in justice ministry when she and other sisters faced pushback from individuals within our religious community for advocating in the ways their consciences called them. When she and several others discerned to cross the line, which resulted for some in-house arrest or probation and landed Kak a six-month prison sentence, although the overwhelming response was supportive solidarity, some sisters criticized this choice and didn't understand why someone would take such a risk.

I was shocked. I had only heard glowing things from sisters about this woman whose ministry was one of holy disruption. Of course, I imagined creating public tension would invite criticism from the outside, but I had never even considered that Kak might have dealt with such friction in her own religious community.

Then Kak shared something beautiful. She spoke of how these relationships evolved over time through openness and dialogue, conversation over a beer or a cup of coffee. She shared how sisters who at one time may have criticized the work carried out by the 8th Day Center for Justice, where she ministered for the past three decades, later hugged her and thanked her for her prophetic witness as part of this movement.

Some people, she said, just need time to process and understand one another. Kak was not afraid to invite those who disagreed with her to the table and, in fact, spoke of these encounters as sacred opportunities for mutual conversion and transformation.

This spirit of openness to transformation was alive and well last week as dozens of Sisters of Providence and Providence Associates joined 32 other communities of women and men religious for the closing celebration of 8th Day Center for Justice.

The center was founded in the spirit of the transformation that came with the Second Vatican Council as religious communities discerned how to respond to the "signs of the times."

The Urban Apostolate of Sisters, formed in Chicago in the late 1960s to provide services, education and advocacy to those made poor by growing inequality, evolved over time into an intercommunity collaboration with a focus on peace and justice. In 1974, when six religious communities committed to this mission, 8th Day Center for Justice was born.

As Sr. Dorothy Pagosa, a Sister of Saint Joseph, explains in 8th Day's publication "Centerings," "The name '8th Day' was chosen from a phrase in St. Augustine's City of God in which he wrote that 'we are in the 8th Day, and creation will not be complete until justice rules the land.' "

Over the past 44 years, 8th Day staff and members have made manifest countless glimpses of this "8th Day." From the annual Good Friday Walk for Justice and non-violence trainings to participation in the sanctuary movement of the '80s and holding vigil with the Muslim community as they faced threats after 9/11, staff members and collaborators have responded to the signs of the times and lifted up a transformational vision of what can be possible.

As a newer member finding her own way in a faith-based social justice ministry, I sat on the edge of my seat and soaked up the prophetic tales of one sister after another who chose to have courageous conversations and step into the unknown for the sake of co-creating this "8th Day."

I was humbled to hear our Sr. Dorothy Gartland, part of 8th Day's original staff, describe how she took up teaching English as a Second Language in the evenings so she could financially support herself while ministering at 8th Day full-time.

My cup overflowed as I listened to the litany of the center's prophetic acts over the years and responded aloud with 350 other attendees, "WE WERE BUILT FOR THIS!" My spirit swelled as I took in the faces of men and women who have held the 8th Day banner over the years and are now living its fullness in the afterlife.

It was a joy to celebrate this transformational ministry and my own community's dedication to co-creating it, and yet the gathering was bittersweet. As we sang "Standing on the Shoulders" by Joyce Johnson, I was so aware of the privileged place I have in continuing the legacy of these women. Yes, as the song says, "I am stronger for their courage, I am wiser for their words." I benefit from the paths they have paved and the ways they have transformed the Sisters of Providence.

Yet, I am painfully aware that we are far from the "8th Day" where justice rules the land. I couldn't help but feel a sense of loss that, as the drumbeat of white supremacy in the U.S. echoes louder and the inequality gap widens, this beacon of creative non-violent resistance is simultaneously dimming.

So Kak's words were welcome when she took the microphone to close the celebration and reminded us all that, "What has been, will be again. What has been done will be done again." The transformation that 8th Day has begun is not limited to its 44-year life span. Perhaps, as Sikh activist Valarie Kaur said in her "Prayer for America," "this darkness is not the darkness of the tomb, but the darkness of the womb." 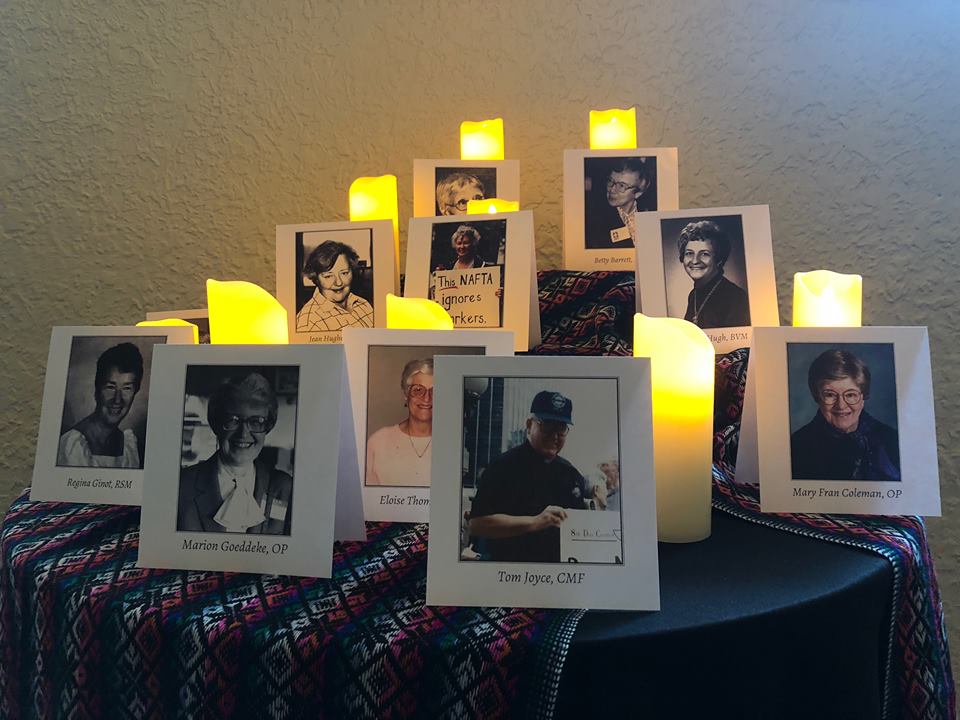 Yes, I know that the seeds sown by the 8th Day Center for Justice have already borne fruit in me and countless others. Yes, I trust that this is not an ending but an evolution.

Certainly in the 175 years since my foundress Mother Theodore uttered the words, "Yes above all things; justice, justice," courageous women have co-created this 8th Day in countless forms: from classrooms to the streets to sisters sitting across from each other at dining room tables. May the transformation continue.

[Tracey Horan is a member of the Sisters of Providence of Saint Mary-of-the-Woods, Indiana. Her first deep conversation with this community occurred in a melon patch during her time as an intern at the Sisters' White Violet Center for Eco-Justice. She is a community organizer with Faith in Indiana (formerly IndyCAN).]

Jubilee 2019: a musical with words