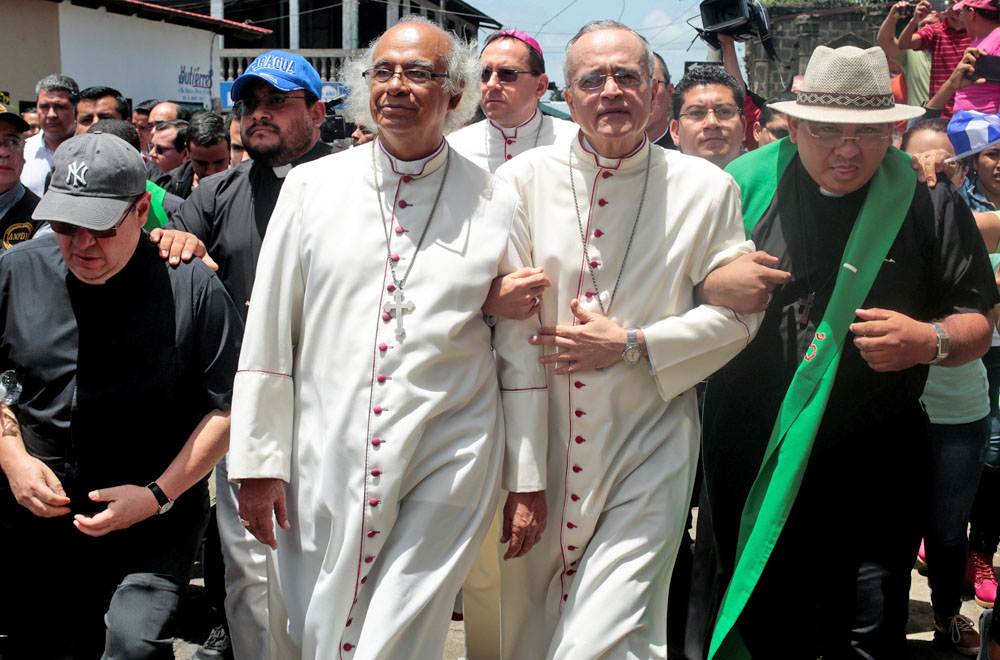 This column comes from written reports and interviews with men and women religious on the ground in Nicaragua. For their safety, their names have been changed and their religious communities and ministries are not identified.

Last year, another former Jesuit Volunteer and I planned a return trip to Nicaragua. We dreamed of visiting former colleagues, seeing schoolchildren now all grown up, eating gallo pinto and quesillo, and watching the sunset behind the San Cristobal volcano as we did when we were missioned there in 2002-2004.

Heartbroken by increasingly panicked emails and Facebook posts from Nicaraguan friends, we sadly shelved our plans to return. Photos of peaceful student protestors clashing with heavily armed police or masked paramilitary in familiar streets; accounts of bishops, priests and sisters facing threats and violence for accompanying their parishioners — all of it moved us to tears.

These stories and images boggled our minds, evoking more the Central America of Ita, Maura, Dorothy, and Jean than the poor but peaceful nation we had known and loved.

I channeled my worry and sadness by singing the national anthem as a kind of prayer for peace for this country that has shaped me so deeply. I could just imagine hearing the bright-eyed, blue-and-white-uniformed schoolchildren singing the words of the anthem with me: "No longer is stained by the blood of brothers your glorious bicolor banner."

During my Jesuit Volunteer years, as my relationships deepened and my Spanish improved, I heard much more about the "blood of brothers" which had been spilled in this Central American nation.

In Managua's noisy barrios and on corn and coffee farms in the mountainous countryside, our neighbors and friends of all political persuasions shared their experiences of the 44-year Somoza regime and the revolution which overthrew it.

The Somoza government was as corrupt and nepotistic as it was brutal, misusing international aid which poured in after the Christmas 1972 earthquake. Somoza's family enriched itself while leaving the majority of Nicaraguans impoverished. As the Sandinista movement against then President Anastasio Somoza Debayle gained momentum, suspected dissidents were disappeared, tortured and killed.

Somoza and his family fled the country and the Sandinistas (the Frente Sandinista de Liberación Nacional, or FSLN) took power in 1979. But the bloodshed wasn't finished. The U.S.-funded Contra war turned the northern rural area (where I later lived as a Jesuit Volunteer) into a guerrilla war zone throughout the 1980s, terrorizing the population and claiming many lives.

I recorded testimonies about these decades of violence, hope, loss and struggle with a hand-held tape recorder my mother had mailed from Wisconsin.

Nicaraguans' hospitality and kindness to me, a citizen of the nation whose government supported Somoza as well as armed and trained the Contras, was astounding and humbling. Threaded through many of the testimonies shared with me over sweet coffee and hot corn tortillas was extraordinary faith and Gospel commitment to working for a just peace.

Now — 39 years after the Sandinista revolution and 16 years after I first arrived in Nicaragua — the stories from Nicaragua echo the fear and faith, repression and resistance that I recorded then.

How has 2018 under President Daniel Ortega become a tragic déjà vu of the 1970s under Somoza? And how is the Nicaraguan church calling us to greater conversion and solidarity?

The most recent wave of violence began on April 19 after Ortega proposed changes to the social security system, requiring those paying in to pay more, while retirees would receive less. The proposal was met with public outcry and the largest protests in 30 years.

There are other criticisms of Ortega and his wife, Vice President Rosario Murillo. His administration sold rights to a foreign company to build an interoceanic canal to compete with the Panama Canal, a plan opposed by many civil-society groups.

New constitutional changes permitted him to serve a third consecutive presidential term. Over the past decade, many of Ortega's former allies have become vocal critics; his administration is now widely seen "as a dictatorship," according to Sr. Esperanza, a Nicaraguan woman religious who described the current state repression as "super fuerte" (super strong).

"[Ortega] is abusing an entire nation," said Fr. Carlos. "If you came to know Nicaragua in the 1980s, you need to realize it's a totally different situation. People who have resisted both Somoza and Ortega say in many ways Ortega is worse."

Since April 19, police and paramilitaries have unleashed brutal violence on protestors, especially university students. Over 300 have been killed and some 2,000 injured. As under Somoza, those suspected of disagreeing with the government face intimidation and threats.

"There are credible reports of torture," said Sr. Esperanza.

Among human rights organizations calling for change are Amnesty International which called the state repression "deplorable" and Human Rights Watch which denounced "arbitrary detention, cruel and inhumane treatment of detainees, and attacks on journalists."

In July, three Ortega government officials were sanctioned to "expose and hold accountable those responsible for the Nicaraguan government's ongoing violence and intimidation campaign against its people," according to a U.S. State Department statement.

Both Fr. Eduardo and Sr. Esperanza urged U.S. citizens in solidarity with the Nicaraguan people to pressure legislators to sanction more officials under the Magnitsky Act. (The Global Magnitsky Act was enacted by Congress in 2016 to sanction foreign governmental officials responsible for human rights violations.)

In Nicaragua the Catholic Church literally has come under fire. On July 14, Managua's Church of the Divine Mercy experienced 15 hours of paramilitary gunfire when pastor Fr. Raul Zamora offered refuge to about 200 students.

"We [bishops] cannot be impartial in the face of the injustice and violence," tweeted Báez on August 5.

"We [the Nicaraguan Catholic Church] are having our Romero moment," said Fr. Carlos, referring to the Archbishop of San Salvador assassinated while celebrating Mass in 1980.

Fr. Carlos explained, "Just like Romero allowed himself to be converted by the excluded in El Salvador … bishops and priests are doing extraordinary things in accompanying the people. They've walked through streets where people are cursing them, calling them coup-mongers, terrorists. They've been physically attacked, like everyone else."

"Our bishops are struggling for the people. The church is the only credible institution in the country," Sr. Esperanza noted with admiration.

Each of these on-the-ground sources spoke frankly of fear as well as faith.

"We live with risk and uncertainty every day. We are at the point of doing our humanitarian work in secret," Sr. Esperanza explained. By offering food, medical treatment and pastoral accompaniment to people wounded in police and paramilitary attacks, religious have become targets themselves. "All of our convents and religious houses are under surveillance."

"People in the church, journalists, human rights workers have to deal with fear. You see these pickup trucks loaded with paramilitaries with AK-47s. They go through neighborhoods, sometimes shooting in the air, harassing people on the street. … Young people especially are afraid of being beaten up or tortured," said Fr. Eduardo.

But, he continued, "we're called to work with Jesus in proclaiming and trying to usher in little by little the kingdom, and challenge injustice and falsehood. If we aren't being persecuted, we aren't preaching the Gospel."

"Even attending Mass is an act of rebellion. We are living the situation of the first Christians under the Roman Empire," said Sr. Esperanza. "I hope no priests or sisters are killed, but that is very possible." She went on to describe paramilitaries shooting doors and ransacking a Catholic school run by women religious in Jinotepe.

In the midst of uncertainty, they are trying to carry on ministry as much as possible and grounding themselves in prayer.

"Above all, we [Nicaraguans] are faithful people. This tragedy, even though it hits us hard, is making us more human and more faithful. That is one of the miracles God is working in us," Sr. Esperanza said.

During a Skype conversation, when I told Sr. Esperanza about my cancelled plans for a return visit she smiled broadly, a marked contrast to the sadness that shadowed her face as she had spoken of threats and intimidation.

[Sr. Rhonda Miska is a Sinsinawa Dominican novice who writes from River Forest, Illinois, where she ministers at Dominican University. She lived in Nicaragua from 2002 to 2004.]