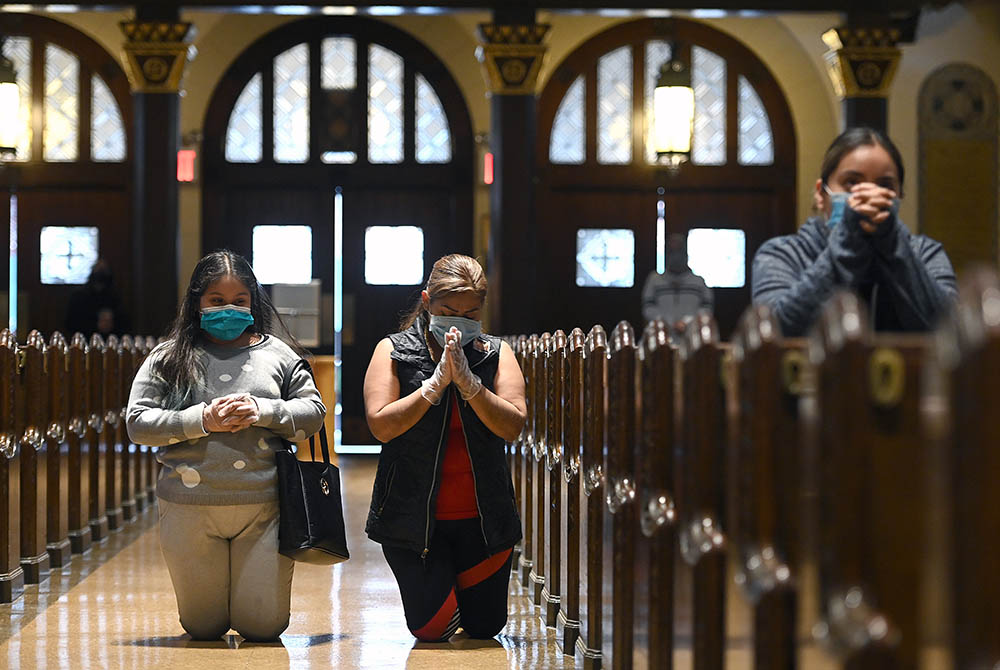 Women wearing protective masks pray inside St. Bartholomew Church in the Queens borough of New York City June 1, as the United States and other places around the world relax restrictions during the COVID-19 pandemic. (CNS/Anthony Behar, Sipa via Reuters)

The intention behind the National Day of Mourning and Lament began with hundreds of faith leaders in the United States sharing a desire to dedicate their weekend prayer services to the more than 100,000 lives lost to the novel coronavirus, concluding with a moment of silence at noon June 1.

The prayerful pause among Christians, Jews and Muslims, however, was not only about remembering and grieving for the country's unprecedented losses, but about recognizing social inequality.

The spread of the pandemic has systemic injustices that have made those already marginalized more vulnerable: immigrants, people of color, the elderly, those living in poverty — groups of people who for various reasons could be more exposed to the virus while having less access to health care.

As the country's coronavirus death toll keeps climbing, the public has turned its attention to the Black Lives Matter movement following the May 25 death of George Floyd, a black man killed in police custody in Minneapolis. The National Day of Mourning and Lament, then, came with the backdrop of scores of major cities recovering from weekend riots in response to Floyd's death.

St. Joseph Sr. Carol Zinn, the executive director of the Leadership Conference of Women Religious, said she found herself "furious" when watching the video of Floyd.

"For LCWR, we have held up this pain of racism and worked very hard and with a lot of determination at looking at our complicity in the systemic racism," she said, speaking of the conference that represents 80% of sisters in the United States.

For Zinn, the conversations regarding racism in the United States are not unrelated to the impact of the pandemic, which has disproportionately affected minorities: The mortality rate for black Americans is 2.4 times higher than that of white Americans, according to APM Research Lab.

"What this pandemic has filleted, it seems to me, is all the dysfunctions of this system, from politics to economics to health care to education," she said.

With a number of fears, injustices and anxieties consuming Americans, Sr. Connie Kelly said the communal moment of silence on June 1 provided a glimmer of hope that the chaos could be transformative.

Kelly, a Dominican Sister of Hope, led a webinar to observe the pause with about 95 participants.

"I thought it was important that we did this together with as many people who wanted to join as possible," she said.

Bookended with prayers and blessings that Kelly led, the webinar was an opportunity for people (mostly sisters, but not exclusively) to send in petitions for those they know who have died from the virus, as well as for those who have died of other causes but could not be recognized with a funeral because of restrictions.

"It would be easy for anybody not to take a moment to think about what's going on, with the COVID deaths and racial disparities in our country — such chaos with two different things, yet so related in many ways. And yet, they chose to join us, so there is a power in that," said Kelly, who said she thought of the webinar with her congregational leadership team.

"It tells me that we can do this; we can get beyond this virus and make the transformation we need to become better human beings to accept everybody."

In a virtual call with about 115 people of faith, Sr. Donna Korba, a Sister, Servant of the Immaculate Heart of Mary, said she was particularly happy to hear Scranton, Pennsylvania, Mayor Paige Cognetti use her opening speech to connect the coronavirus to justice issues.

Cognetti declared June 1 a National Day of Mourning and Lament for the city, as the U.S. Conference of Mayors, a bipartisan group representing 1,400 mayors, co-sponsored the event.

With a video, songs and prayers across faith traditions, the group also rang a bell 14 times for the 14 weeks they've been in quarantine and in memory for those who have died in that time.

"It's a moment of possibility," Korba said of the wider Scranton faith community sharing a "wonderful sense of kindred spirits."

Korba added that the group prayers served as a reminder "not to isolate things — 'This is the coronavirus' and 'this is a racial issue' — it's all about people suffering."

Her prayer is for society not to go back to "normal," which for her meant destroying the Earth and oppressing people.

"I do personally believe with all my soul that we're being called to something deeper and not something to fear," she said. "In crisis, there's always the possibility if we take the time to really see."