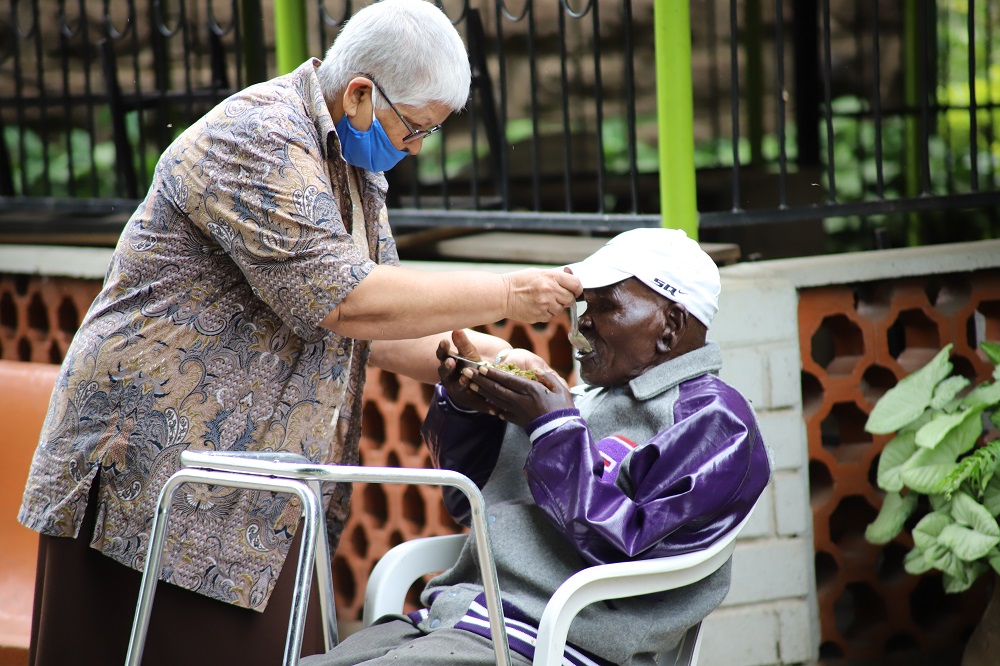 Sr. Lydia D'sa, a Franciscan Missionary Sister for Africa, helps an elderly man to eat, a daily routine at Cheshire Home for the Elderly in the Kariobangi slum outside of Nairobi, Kenya. (GSR file photo/Doreen Ajiambo)

A recent webinar sponsored by the Conrad N. Hilton Foundation's Catholic Sisters Initiative focused on the impact of COVID-19 on current grantees. A key premise was to take stock of the effect of the pandemic on Catholic sister organizations and congregations as some countries begin to ease lockdown restrictions and next steps are being considered.

Sr. Jane Wakahiu, a member of the Little Sisters of St. Francis, Kenya, and director of the Catholic Sisters Initiative, framed the June 16 meeting for about 100 online participants within the context of Catholic social teaching, solidarity and option for those made poor.

She also noted the current and future impact COVID-19 and the anti-racism protests combined will have on the United States and on the Hilton Foundation, which funds Global Sisters Report. Prior to the protests, the Hilton Foundation had committed itself to integrating diversity, equity and inclusion as essential to all its relationships, processes and grant-making. The protests provided an entryway for this commitment to have even more substance.

Executive leaders of four women religious organizations — the International Union of Superiors General, the Association of Consecrated Women in Eastern and Central Africa, the Council of Major Superiors of Women Religious, and the Leadership Conference of Women Religious — gave overviews of the toll the pandemic has taken on congregations and communities in their regions.

From UISG's base in Rome, Loreto Sr. Pat Murray, the union's executive secretary, noted that Europe, particularly Italy and Spain, became the epicenter of deaths of religious women and men, devastating many congregations with grief from loss of members, ministry and consequential financial insecurity. Sisters barred from on-site ministries felt they had abandoned their people and heard this from others who felt the sisters should be out helping.

But because most were elderly, they were required to stay at home. This thrust them first to focus on community living and prayer as lockdowns became the norm. At times, the combined grief was almost paralyzing, Murray said. Gradually, the sisters found ways to connect with people in need of counseling, spiritual support, education courses or just company.

UISG became the hotline for the women religious leaders globally looking for advice and assistance. It gradually became clear that Amazonia, West and Central African countries, and Asian countries were the most overlooked parts of the world and needed to be the next focus of UISG attention. 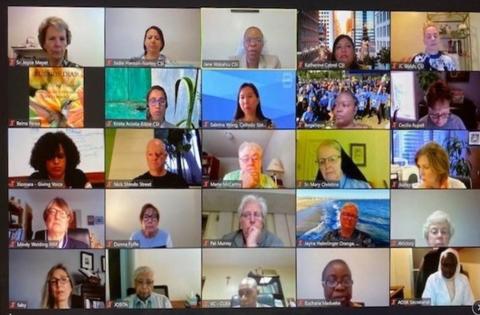 UISG will remain a center for global education and communication for sisters beyond the COVID-19 crisis. I was interested to learn that a future project will map the impact of COVID-19 on current and new emerging ministries globally. We are all uncertain about how this historic situation will impact religious life in every aspect.

Sr. Hellen A. Bandiho, a Sister of St. Therese of the Child Jesus from Bukoba Diocese, Tanzania, and general secretary for the Association of Consecrated Women in Eastern and Central Africa, which represents 10 countries' religious conferences in East Africa, helped us understand the challenges sisters in these countries face. Lack of national health care infrastructure is a terrible burden, and prevention of disease is nearly impossible for thousands of people who do not have access to water for drinking and certainly not for handwashing.

These are the sisters' neighbors, and sometimes, families are left without basic necessities and food, since the usual markets where food is available are closed. People face starvation every day in parts of every one of the 10 countries. This includes hundreds of pregnant women, young children and people with HIV/AIDS whose medicine is ineffective without food.

Families in remote rural areas lack any education about the disease, so how can instruction about maintenance of their health make any sense? Sisters in Zambia have been using the radio to try to get the word out about prevention. Their challenge is the 60-plus different languages in the country and finding sisters who can speak to them for the good of their neighbors. This is a similar story of many sisters in African countries who are searching for creative ways to assist those in remote rural areas.

Schools are closed, and the students do not have the advantage of being taught online like in the United States and other wealthier countries. This means children of school age will fall behind in their progress, and some will drop out because parents, left jobless because of the pandemic, will not have money to pay fees. This huge resource for the countries' futures will be lost.

Sisters themselves are especially isolated from community members because the majority do not have access to reliable technology infrastructure, and only a few sisters are trained in technology skills. Even electricity is missing for hours each day. Communication systems are unreliable, including phones that need minutes added when lockdown is in force.

Sisters in African countries, too, are separated from their ministries of education, health care and social and pastoral work. Besides schools, they have had to close other ministries because facilities are not able to provide the required safety or financial constraints. Many sisters' congregations have tried to provide food and sanitation supplies if they have sufficient financial resources or organized others to contribute to these efforts. Knowing the resilience of sisters in Africa, I am sure their commitment to and love for their people will find a way through this crisis.

I was struck by how COVID-19 surprised all of us in the West, especially the United States. And because of unpreparedness and somehow blindness to the global community, the United States has led the world in number of cases and deaths. We have learned we are not untouchable by global forces. Sisters' congregations and ministries here have also been impacted, but not to the extent of congregations in Italy or Spain.

There have been many deaths from COVID-19, and some of those infected survived. Again, because of infrastructure of electricity and internet, sisters are creatively carrying on their ministries as best they can. But there is inequity of access in the United States, particularly for our sisters and brothers of color. They live in congested spaces; most are the essential workers who care for the rest of us and are usually poorly paid, making it impossible to provide internet access or electronic devices for their children's education.

Members of the Council of Major Superiors of Women Religious have shown extreme creativity in reaching out to the people they would ordinarily be serving in education, parenting and evangelization, said Sr. Mary Christine Cremin, a member of the Religious Sisters of Mercy of Alma, Michigan, and executive director of the conference, which has a membership of about 120 communities with approximately 6,000 sisters. They, too, are feeling the financial pain of little or no income. The sisters have been challenged to also organize their convents to provide for social distancing and sanitation. Extra prayer and reflection times have been scheduled to pray for God's people around the world, and a renewed energy for community life has emerged.

St. Joseph Sr. Carol Zinn, the executive director of the Leadership Conference of Women Religious, reported similar situations for LCWR members, although convents are often larger. LCWR has about 1,350 members who represent about 80% of the 48,500 women religious in the United States. The challenge to keep large numbers of elder sisters safe and well is also a great strain on finances, for some congregations are already facing bankruptcy. Noninstitutional ministries have been hit very hard, particularly those that serve immigrants and those who are homeless, but again, sisters have found ways to partner with others to serve as many as possible.

Even though uncertainty looms over the future wherever we are in the world, Zinn left us with questions to think about: What is the new role women religious are being called to in the context of COVID-19 and dismantling systemic racism? Will we be willing to change, or will we go back to doing and being the same?

As I thought about these questions, I recalled that our U.S. race riots not only impact us, but the entire world. Countries in Africa and Asia are challenging us to recognize our stance of "superiority" about human rights. We need to address our racism not only in our own country, but how we behave toward people of the whole world. The countries of the South have suffered through colonialism from the West and still bear the consequences that keep them vulnerable. It is important for us to reflect on how much of their suffering is our responsibility.

Although the program had allotted space for questions, time ran out for dialogue among participants. However, there are plans to have regular sessions so dialogue can take place that can lead religious life into a new global future. To prepare the group for this and before the ending prayer, Wakahiu assured the grantees that her team is ready to engage with them as needed. She then raised two important questions: How can we as religious around the world reorganize ourselves as a global sisterhood? And what can be done in the next six months to find solutions to the barriers that prevent global sisterhood?

As I left the webinar and everyone was saying goodbye, I felt the impact and truth of the current mantra of this COVID-19 experience: "We are all in this together."