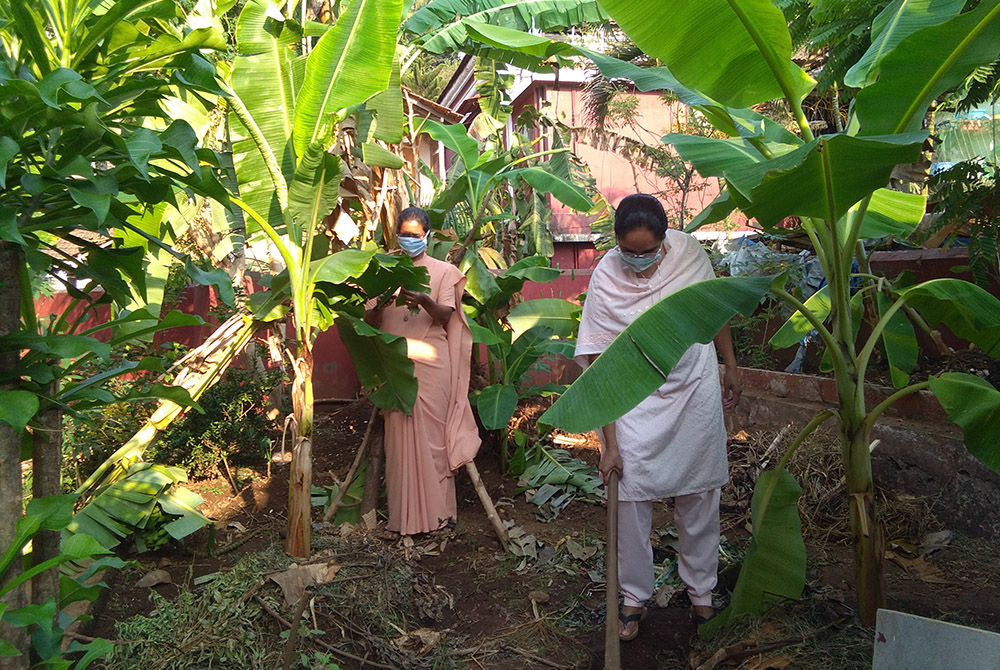 Celine Sebastian and Sr. Rosy Mathew from the Daughters of St. Paul garden at their convent in Panaji, Goa, during the nationwide lockdown to contain the coronavirus pandemic. (Provided photo)

In India, a nationwide 21-day lockdown because of the COVID-19 pandemic has severely restricted the movements and activities of nuns of various congregations as well as their more than 1.37 billion countrymen since March 25. India accounts for the world's largest number of Catholic women religious, with nearly 99,000 professed nuns and more than 5,000 novices in 284 congregations.

The Missionaries of Charity founded by St. Teresa of Kolkata has been hard hit by the virus and the restrictions. On April 1, an Indian member in the United Kingdom died from COVID-19. Sister Sienna, a native of Jharkhand, eastern India, had been distributing food packets to those affected by the coronavirus outbreak. The septuagenarian died in Morriston Hospital in Swansea, Wales, where she was admitted with complications of the viral infection.

In India, the Teresa nuns, as they are popularly known, continue to look after orphans and the destitute with some in-house workers. Their houses now conduct eucharistic adoration and service in the absence of celebration of Mass, said a nun who requested anonymity because members of her community usually do not speak directly to reporters. The congregation has about 5,150 sisters in 758 houses spread over 120 counties, as of 2015.

The lockdown has forced several congregations to cancel their major programs during April and May, the major holiday season in India. One of them, the Missionary Sisters of Mary Help of Christians in northeastern India, has canceled their programs for Holy Week.

"No one is venturing out for safety's sake," said Sr. Bridgit Diangdhol, general councilor for evangelization, based in Guwahati, Assam.

"Our members now spend more time in praying for the world suffering from the pandemic. God is our strength," she said. 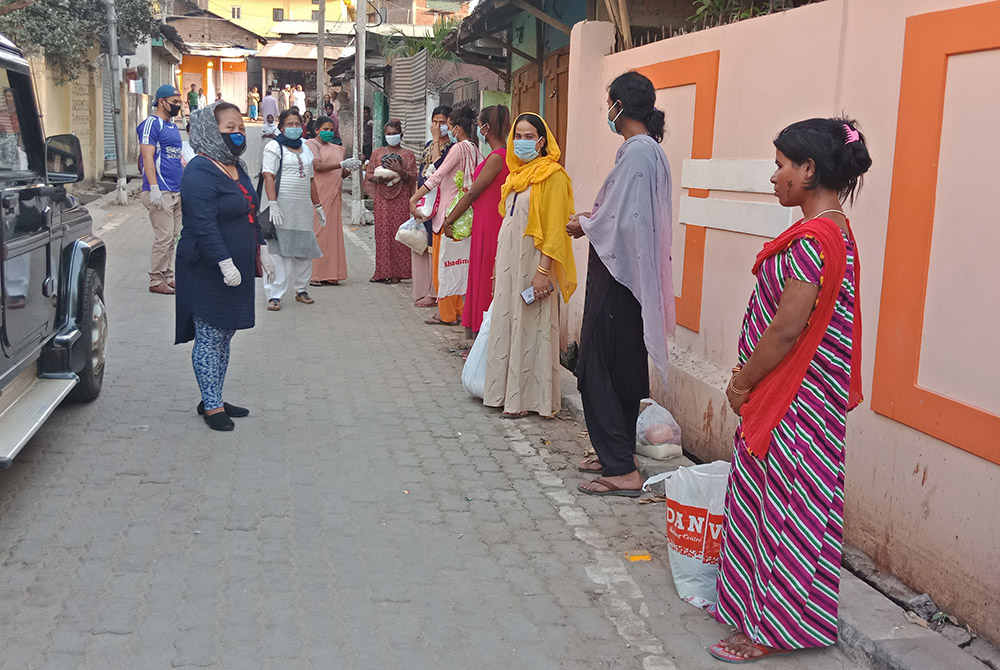 Sr. Prema Chowalloor, a member of the Sisters of the Cross of Chavanod, supplies food kits to transgender people living around the railway station in Guwahati, a major city in northeastern India, during the nationwide lockdown to contain the coronavirus pandemic. (Provided photo)

Another congregation in Guwahati, Sisters of the Cross of Chavanod, has canceled retreats for its members and the final profession of seven junior sisters this month. The congregation currently has 1,387 members of 12 nationalities from 15 countries working in four continents.

Sr. Betsy Devasia, who directs the congregation's Women Development Centre, said they had sent away 45 girls who were doing distance education and skills training with her just before the lockdown.

"Our community now spends more time in prayer, which is very important at this moment of uncertainty," Devasia said. As directed by their provincial, their convents conduct eucharistic adoration by members taking turns to spend time before the Blessed Sacrament from 9 a.m. to 4 p.m., ending it with the Way of the Cross.

She said the nuns follow the government instructions to stay at least 1 meter away from each other in chapel as well as in the dining room.

"None of us are moving out of the compound. Our gate is kept locked. We do everything by ourselves," Devasia said. 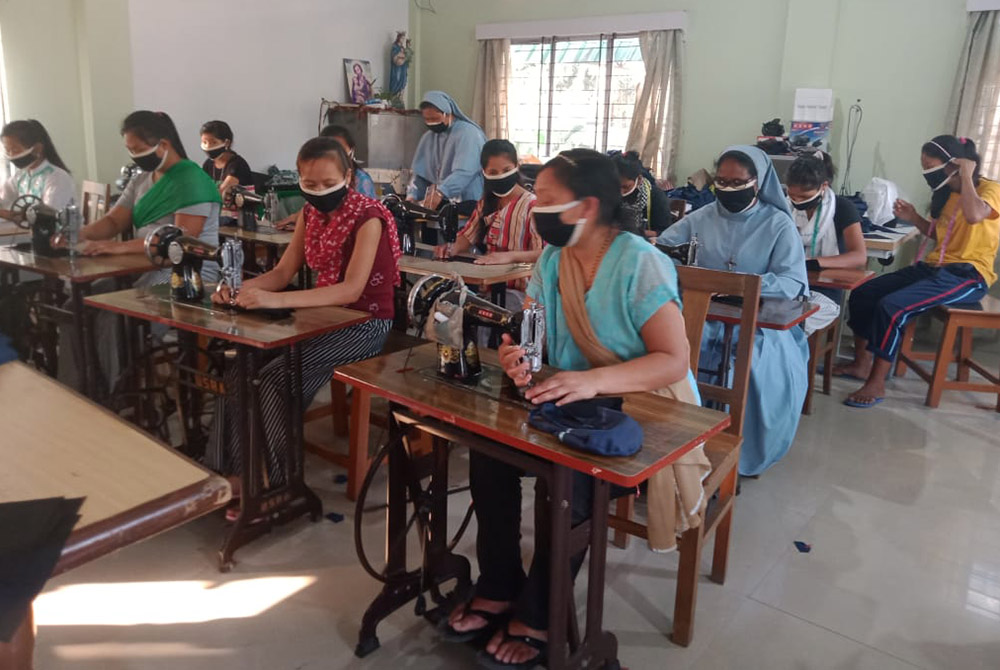 In Goa, southwestern India, the Sisters Adorers Handmaids of the Blessed Sacrament and of Charity manages a home for single mothers has changed its daily routine.

"Our trainers are not able to come to teach the women. So we conduct Bible classes for the women and engage them in gardening," said Sr. Gracy Philip, superior of their convent in Nouvem village.

In the Goa Archdiocese, nuns from various congregations have joined parish teams to distribute provisions to daily workers, widows and the marginalized — those the lockdown most affects. They adhere to the government guidelines on social distancing, Fr. Maverick Fernandes, director of the archdiocesan social service center, told GSR.

Nuns from different congregations are part of more than 500 people collaborating to sew masks in the Wayanad district of Kerala, a southwestern Indian state. The sisters observe social distancing and lock their gates to outsiders. They give the masks to the social work department of Battery Syro-Malankara Diocese, said Sr. Subha Theresa, provincial of the Daughters of Mary, which has 917 members in 172 houses spread over six provinces.

The Sisters of the Adoration of the Blessed Sacrament, another congregation with more than 4,000 members and based in Kerala, also has postponed programs such as the silver jubilee of five members, and first profession and final profession planned for after Easter.

"They will be held after the lockdown," said Sr. Jancy Alunkal, who is in charge of Kerala. 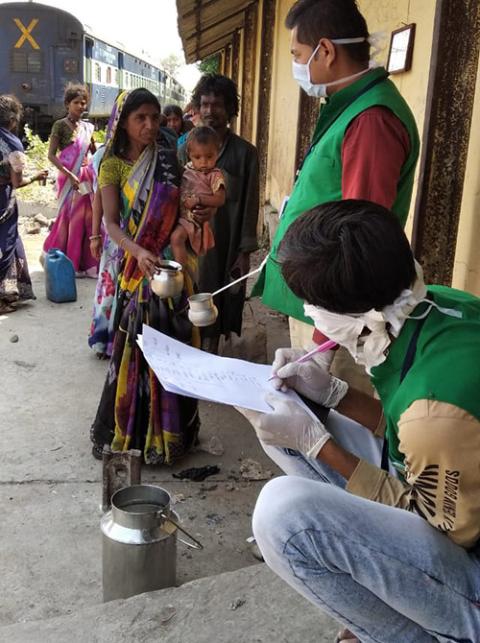 Staff members of the Jeevodaya orphanage, managed by Sr. Clara Animottil of the Sisters of St. Joseph of Chambery, distribute milk, biscuits and other provisions to migrant families stranded in the central Indian city of Itarsi during the nationwide lockdown to contain the coronavirus pandemic. (Provided photo)

In the central Indian city of Itarsi, Sr. Clara Animottil of the Sisters of St. Joseph of Chambery is worried about finding food for 26 boys and 24 girls staying at her center for orphans.

"We have difficulty in getting vegetables and other daily use items, but we manage with the minimum available," said the nun, who directs Jeevodaya (Dawn of Life), the orphanage. "Now they cannot go out. We do not allow anyone from outside to enter the campus," she said, adding that the children and her companions strictly follow social distancing norms.

Animottil said her 720 companions in four Indian provinces follow social distancing in daily prayers and other activities. She also said this is the first time in her religious life that she is deprived of daily Mass.

"We have no idea how we will celebrate our Holy Week," she said.

The lockdown has affected the Meals on Wheels ministry of the Society of Devapriya (God's Beloved) Sisters, who serve the Rajkot Diocese in Gujarat, western India.

"We are now forced to stay inside our convents and spend quality time in praying for saving the world from the clutches of the deadly coronavirus," said Sr. Amala Puthenkudy, superior general of the congregation, which has 63 members in 18 convents in India.

She has allowed her convents to fix their own schedules rather than follow a uniform schedule, she said. The superior said they cannot discontinue their program to distribute cooked meals to the elderly and destitute, as there is no one else to feed them.

"We cover our faces with face masks, put on hand gloves, sanitize hands after visiting each household and on return remove the habit and bathe before entering the convent," she said. 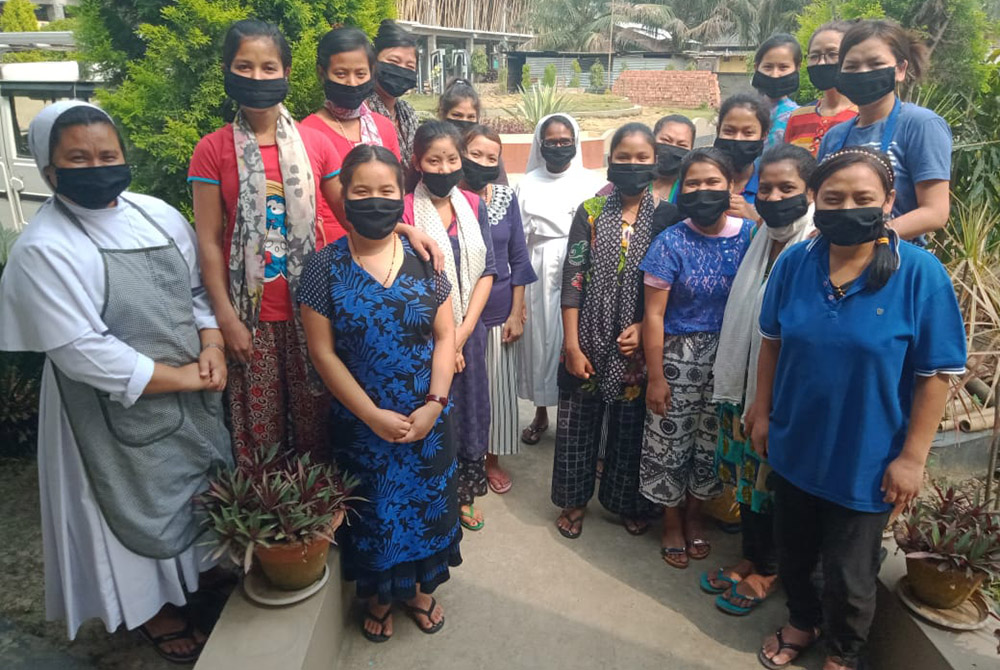 Girls at the Bishop Ferrando Centre for Development Initiatives managed by the Missionary Sisters of Mary Help of Christians congregation in Guwahati, northeastern India, during the nationwide lockdown to contain the coronavirus pandemic (Provided photo).

The nuns also conduct eucharistic adoration from 9:30 a.m. to 1 p.m.

"During the adoration, we feel we are with the suffering world and feel close to those suffering," Parmer said. The nuns also undertake a 12-hour vigil starting at 6 p.m. with the special intention for coronavirus destruction.

India's largest women's congregation, the Franciscan Clarist Congregation, has undertaken 12-hour adoration in its more than 850 houses in India and abroad with special intentions for God's mercy to end the coronavirus attack.

"We also pray the rosary and the Divine Mercy Chaplet every hour for those fighting the pandemic around the globe: doctors, nurses and paramedics," said Sr. Alphonsa Abraham, provincial of Nirmala Province in Vijayawada, in Andhra Pradesh state, southern India.

The Kerala-based congregation with more than 7,000 members has stopped many social apostolates that directly require the presence of the nuns, she said. The nuns have sent their helpers away and do the chores themselves. They, however, still pay the workers' salaries.

Although they maintain social distancing in chapel, dining hall and other places, "we are still close at heart and united in prayers with the whole world," Abraham said.

The Daughters of the Sacred Heart of Jesus, an Italy-based congregation, also have suspended their daily social activities and spend most time in prayer.

"We strictly follow the government guidelines to maintain social distancing to avoid any physical contact to ensure that no one should get infected with the deadly viral disease," said Sr. Gemini Sebastian, the Indian provincial procurator. "Unless we unite in prayer, we cannot defeat the deadly disease." The congregation's Indian province has 90 nuns in 12 houses.

Another Italy-based congregation, the Daughters of St. Paul, has closed all 16 book centers in India since mid-March. Their Indian provincial, Sr. Arulmary Susai, has asked the sisters to use the lockdown to make online retreats offered by some retreat preachers.

She said the lockdown, which could go beyond April 14, is an unasked opportunity from God to make prayer the central force of her nuns' life and mission.

"Our plans for many things have become topsy turvy," she wrote to all 168 members of their Indian province.