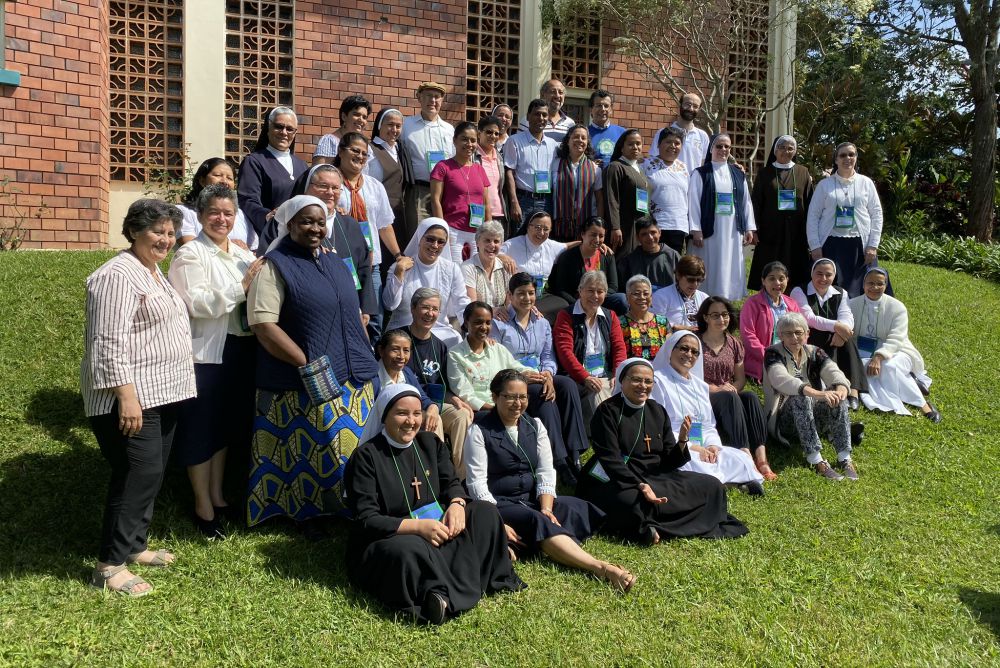 The Seminar on Integral Ecological Conversion, held Nov. 30-Dec. 2, 2019, in San José, Costa Rica, focused on the challenges and roles of religious life with the conclusion of the Amazon synod. (GSR photo/Soli Salgado)

As one of just 10 women who participated in the Amazon synod, Sr. Daniela Cannavina returned to Latin America eager to impart the wisdom from her experience at the Vatican to fellow religious, with anecdotes and summaries of the lively discussions from inside the hall.

But mainly, Cannavina returned eager to keep the momentum of the synod alive.

"We didn't want to waste time," she said, adding that to wait for the pope to publish his final document on the synod, which has not yet been released, risked spoiling the "nutrients" within the working drafts. (A Capuchin Sister of Mother Rubatto, Cannavina attended as a representative of the International Union of Superiors General.)

At the synod, which explored the Amazon's pastoral and environmental concerns Oct. 6-27, 2019, every participant was granted four minutes to speak. Cannavina chose to spend her brief time advocating for women deacons and for the region's ministries to have a more elevated, "feminine, Amazonian profile," she said.

She told Global Sisters Report that the many committees and seminars of the Confederation of Latin American and Caribbean Religious (CLAR), of which she is general secretary, are almost entirely made up of women, so "it is up to us to create our own visibility, to continue that formation and build a synodal church."

She took this message and all her reflections from the synod back to Latin America, where, not even two months later, her representative role was flipped: Cannavina, an Argentine, was now tasked with communicating her experience to a small room full of Latin American religious, all of whom gathered in San José, Costa Rica, Nov. 30-Dec. 2, ready to localize the synod. 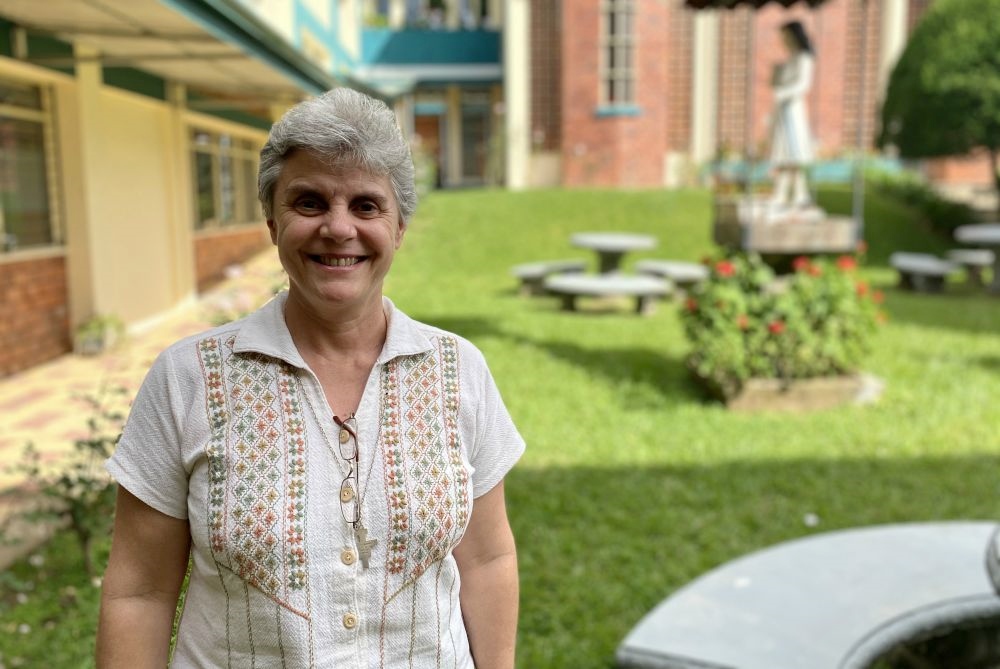 Sr. Daniela Cannavina, a Capuchin Sister of Mother Rubatto, is CLAR's general secretary and participated in the Amazon synod as a delegate for the International Union of Superiors General. (GSR photo/Soli Salgado)

Amazon region's challenges apply to all

The group of roughly 40 women and men religious, priests, deacons and lay theologians came from all over Latin America for the CLAR gathering. But most of their respective countries are geographically untouched by the Amazon.

Alirio Cáceres Aguirre, a permanent deacon in the Diocese of Bogotá, Colombia, who spent 15 days at the synod, said one of the triumphs of the synod was the understanding that the Amazon is a "laboratory," meaning all the challenges and issues discussed with respect to that specific region "still apply to other 'little Amazons,' the planet as a common home that contains pluralities, different cultures fundamentally linked by ecology," he said.

A chemical engineer and theologian, Cáceres attended the CLAR gathering in Costa Rica on behalf of the Episcopal Conference of Latin America and Caritas' integral ecology program.

He described the synod as a "confluence between an ancestral, indigenous, Latin American worldview and the European structures of Catholic thought."

"The fact that the synod happened is, in and of itself, a success," he said. That many Catholics on the outside, including his own friends and family, saw the synod as controversial — accusations of pagan practices and fear for the church's future, he said, contrasted the beauty and fraternity experienced within the synod — serves as "a kind of diagnosis on where we are as a church."

"It's an invitation to think: How is it that we are going to achieve communion?" he said, adding that those meeting in Costa Rica were privileged to live out the lessons imparted by the Amazonian people: Words must become actions; beware of letting good intentions stay trapped in discussion.

The three-day CLAR summit included presentations from religious and laypeople on various environmental challenges they face in their regions and how they've worked to address them, which was a source of inspiration for those gathered.

Ariana Díaz Acuña is a 33-year-old lay theologian and the deputy director of the Laudato Si' Observatory, which the Catholic University of Costa Rica launched in 2017 to influence environmental public policy in developing countries in the spirit of the encyclical.

While education is a key focus of the observatory, promoting workshops and projects throughout Latin America, Díaz said she and her colleagues also educated local bishops several months ahead of the synod who knew only rough details about the pastoral and ecological challenges in the Amazon.

At the CLAR gathering, she presented scientific information from the observatory's Environmental Development Index, which measures environmental impacts of countries all over the globe.

"We already have a lot of theological depth on this topic, but sometimes, we don't know the science as well," Díaz said.

But being among men and women religious who see the negative effects of climate change firsthand, she said, was a powerful reminder of the greater purpose of her academic work.

"I could feel the pain of the people who suffer from drought, who are up against mining, whose homes are destroyed," Díaz said. "The work I do in the observatory, the synod, this seminar, it leaves me restless and makes me think, on a personal level, about what decisions I can make in 2020 to help the disadvantaged in my community."

But while smaller day-to-day deeds at the individual level are necessary, Cáceres emphasized that "it is at the institutional, community level where meaningful change happens."

"Our response should not be through a rigid, business-like structure, but rather, through networks, alliances and coalitions that create concrete action," he said, adding that they ought to replicate the synodal process in its inclusivity and open dialogue.

"This is how the global Catholic movement can offer guidance and inspiration to all of humanity." 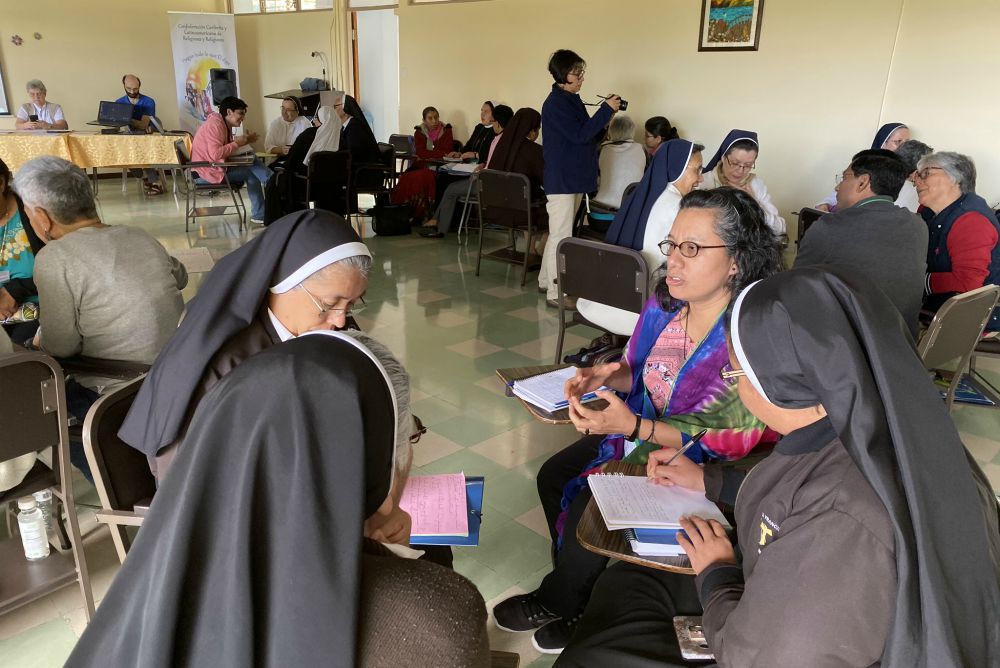 The Nov. 30-Dec. 2, 2019, CLAR gathering was an opportunity for religious involved in ecology in their respective Latin American countries to network and share experiences. (GSR photo/Soli Salgado)

Religious must be involved

Sr. Marleen Renders, a Missionary Sister of the Immaculate Heart of Mary from Belgium, has been ministering in Guatemala since 1986. She's spent much of the last decade accompanying Guatemalans who have been resisting a mining operation on their land outside Guatemala City.

"It hurt this community that the church wasn't present on this issue," she said, noting that parish priests hesitated to get involved because some in the community were in favor of the mine. In 2012, locals then turned to Guatemala's conference of religious, CONFREGUA, for which Renders was then the secretary.

A few times a week, Renders joins the protests that take the form of overnight campgrounds in the middle of the street to prevent the mining trucks from reaching the pueblos.

"Those fights are never just about the people today, but about future generations, the animals dying in exchange for gold extraction," she said. The more time she spent with them, Renders added, the more she understood the overlap between the Earth and their spirituality.

"I've been a part of so many experiences like these, where you see people who are willing to put their lives on the line for their environment, for their community," she said. "As religious, we can't be on the outside looking in." 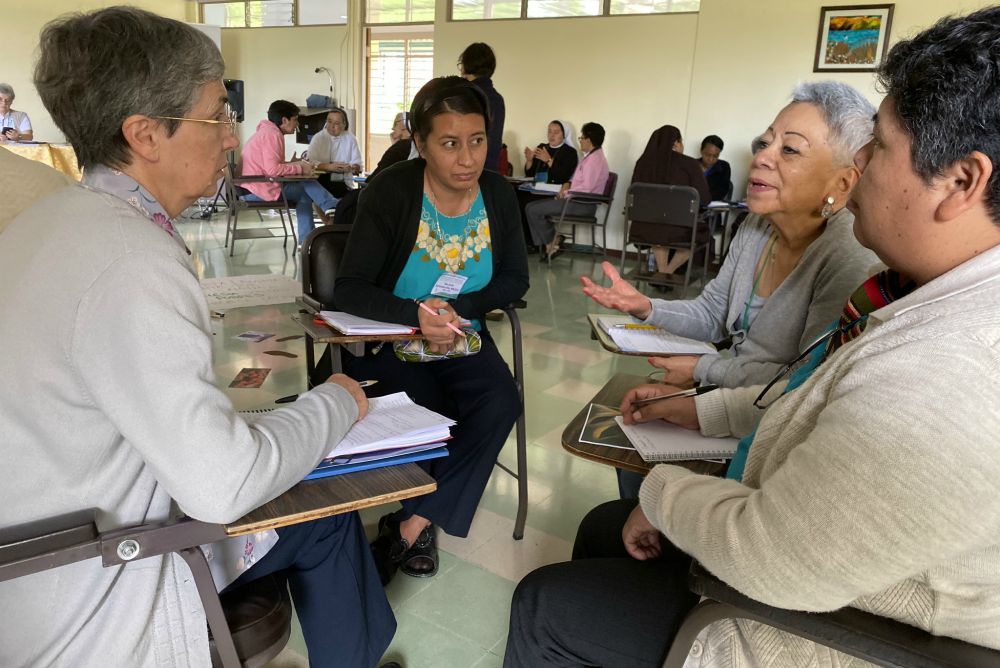 Participants discuss their countries' issues at the Nov. 30-Dec. 2, 2019, gathering of the Confederation of Latin American and Caribbean Religious. (GSR photo/Soli Salgado)

Even though the focus of the synod was the Amazon, Renders said, "you still feel Guatemala's indigenous in all of this, the people who live in the ravines.

"You can't look at the Amazon like one specific place in the world. The conversation is bigger than that. We're talking about all the territories who share those problems and concerns," she said. "And I have a lot of hope."

Moving forward, CLAR's role in supporting the religious in the Amazon, Cannavina said, will be through strengthening the Panamanian ecclesial network, REPAM, ensuring that "the process that was lived in the synod does not fall through the cracks, but that it continues to mobilize us." She added that CLAR will also reflect on and revisit its structures, such as how they can expand their presence in the regions where it's needed.

At the synod, Pope Francis encouraged creativity and novelty in addressing the challenges before the church, which Cannavina emphasized as a key takeaway but, ultimately, an ongoing process.

"Creativity isn't just born in a few days of meeting; it's all the possibilities that come from the reception of the synod," she said. (The CLAR gathering concluded with a final document summarizing the group's reflections and calls to action, available here in Spanish.)

"We as a church have to be allies with the people who are most exploited, who are most in need of a presence to walk beside them," she said. "With that alone, we have a lot on our plate."

The synod more than anything demonstrated "emerging points," Cannavina said, such as developing formation houses inspired by Amazonian cultures, an observatory for Latin American research, and for religious life to see themselves as pilgrims in a process that is at once intercultural, intercongregational and itinerant.

"I'll never forget at the synod when the pope was told he is not alone in this, that there were many of us accompanying and supporting him," Cannavina said. "It was like an invitation for the pope to keep paddling, to keep sailing inland because we'll go with him — a church in communion. We're all in this process of looking for a new way of being a church." 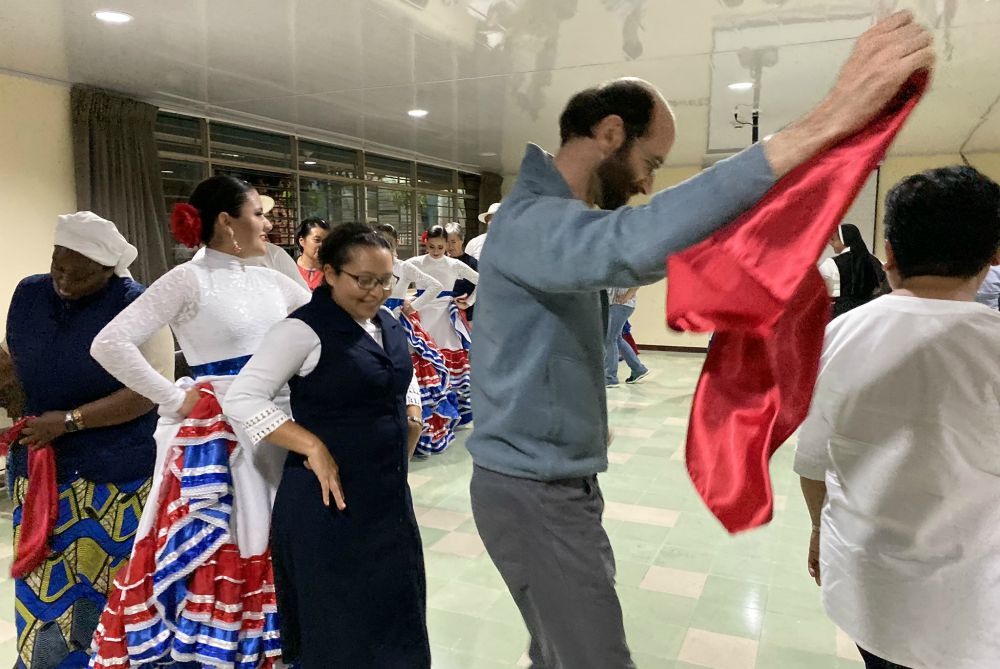 Like after all CLAR gatherings, the group wrapped up the three days in San José, Costa Rica, with a cultural party, this time with a local Costa Rican dance troupe kicking off an evening of music and dance. (GSR photo/Soli Salgado)