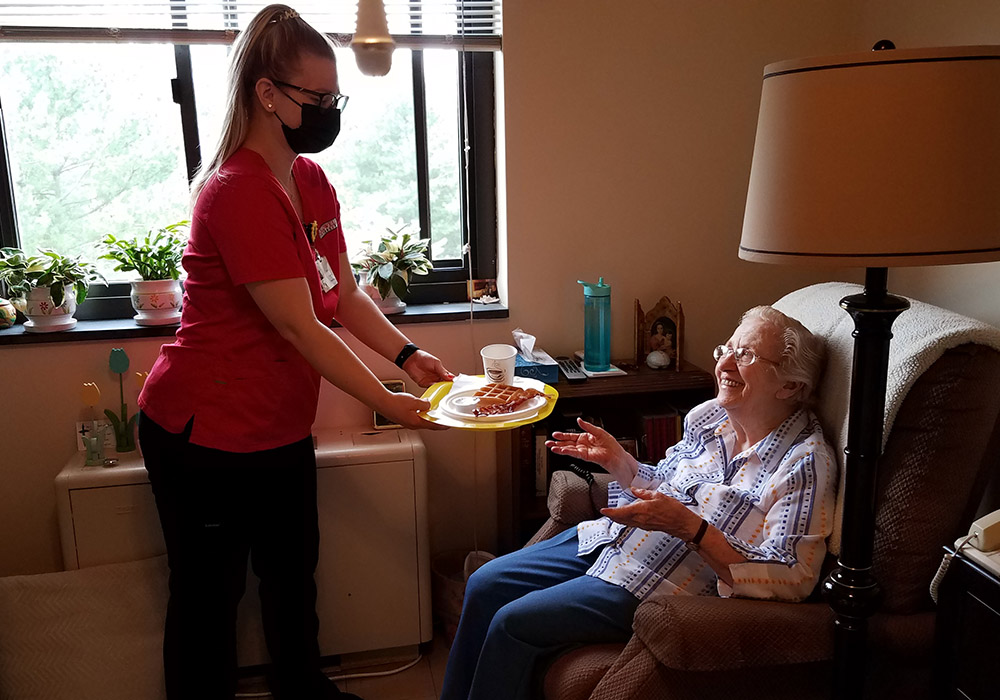 Elizabeth Ann McChesney's shift begins at 8 a.m., when the Caldwell University nursing incoming senior clocks in at the St. Catherine of Siena Convent, a continuing care facility and home of retired Dominican Sisters of Caldwell, New Jersey. After getting a rapid COVID-19 test, she heads upstairs to help the sisters with breakfast before getting a cup of coffee and making her rounds.

She begins tidying up some of the sisters' rooms and makes a few trips to the laundry room before they get dressed and go to morning Mass at 11:30. After Mass, the sisters head to lunch, marking the near end of McChesney's daytime shift.

On her first day at St. Catherine's in January, "I was terrified because I've never had clinical experience," McChesney said. "Olga, who I work with on Thursdays, was training me. She told me to make a bed, and I told her I didn't know how because we only did it one time in lab."

Compared to her first day, working at St. Catherine's is now "a walk in the park."

McChesney and Caldwell incoming nursing senior Stephanie Zaldivar were hired to work at St. Catherine's as nursing assistants during the Spring 2021 semester. After the semester ended, they chose to continue working at the convent. 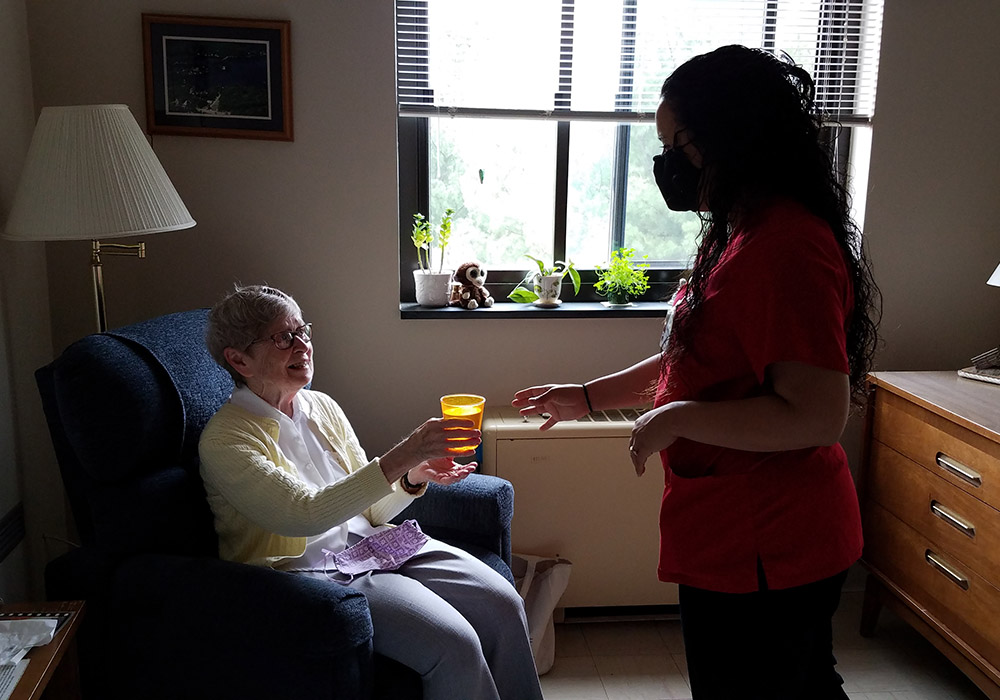 "The more time you spend there, the greater the bond is that you make with everyone," Zaldivar said. "The sisters get so happy when they get to see you. They have so much love for all of their nursing assistants and staff. It's just a good environment to be in."

She and McChesney discovered the job at St. Catherine's during winter break via an email from Caldwell's nursing department.

"Since we have the nursing school and St. Catherine's on campus, we were trying to figure out how we can get the students involved more with St. Catherine's," said Donna Naturale, associate dean of nursing and public health at Caldwell University.

"The nursing students could work with the sisters and learn not only about nursing, but also about the Dominicans and the history of the university," she added.

"I've always dreamt of that happening," she said. "I entered the Sisters of St. Dominic about 53 years ago. I was a registered nurse then. As a postulate novice, I worked quite a bit in the infirmary, which was just sisters at that point, some aged but also some critically ill sisters. They liked being at home instead of going into a hospital."

Beirne contacted Naturale before Christmas, saying that St. Catherine's needed some nursing assistants who could work with Ellen Kane, the head nurse.

"Absolutely," Naturale responded. "I would just need a job description."

"We were focused on the junior-level nursing students who just finished that first semester of nursing," Naturale said. "The students were just learning how to interact with patients, so we had to go through some of the tasks that would be appropriate for them." 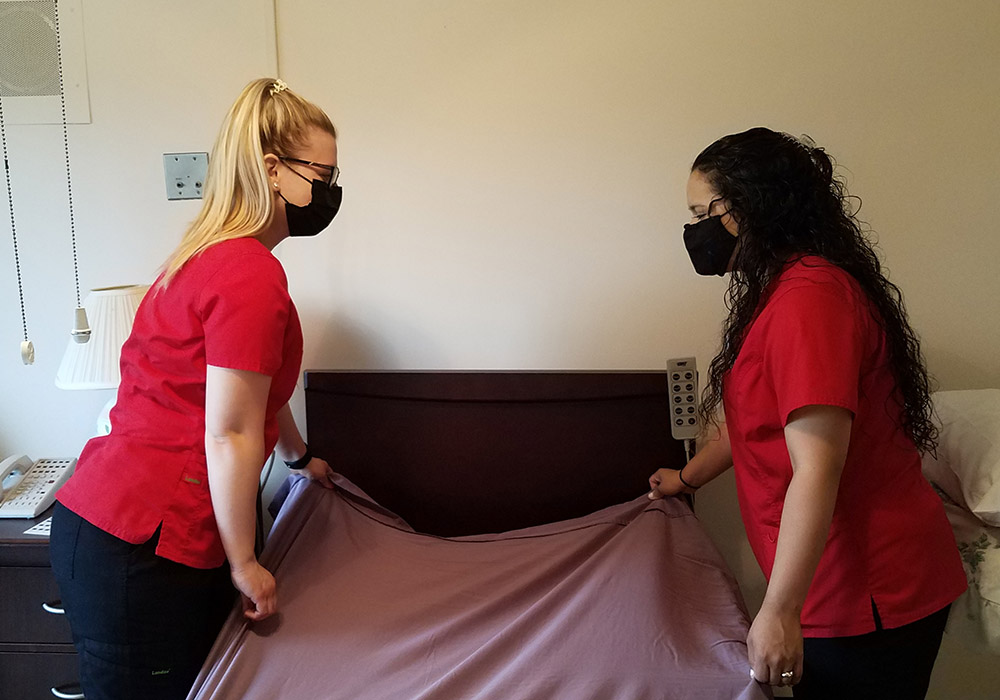 A few days after New Year's, she emailed the junior and senior nursing students to evaluate interest. Four or five students applied within the first day, Naturale said.

When Kane received news of the opportunity, she said she was overjoyed.

"Because of the pandemic, it's difficult to replace people who resigned," said Kane, who has worked at St. Catherine's for nearly 12 years.

"During the pandemic, people were frightened to come out and get a job at elderly facilities because of the news, so it was hard to find somebody to come work. So the student nurses were a perfect match," she added.

Due to COVID-19, the nursing students couldn't conduct in-person clinical hospital rotations during the fall semester.

"They wanted some practical experience with caring for real people, not in a lab, and so it just worked out," Kane said.

She said watching McChesney and Zaldivar progress over the past months has been rewarding. 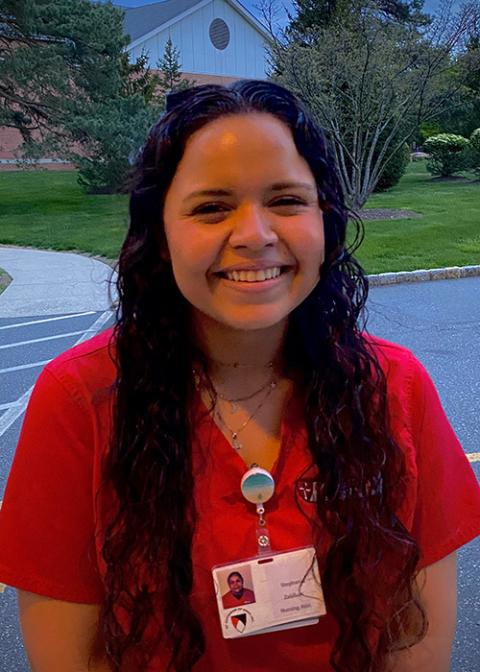 "They had that reserved nature about them when they first came," Kane said. "Now, they come on the floor, and they're grabbing this pile of laundry that needs to be done and going off and making sound decisions. I've also seen their confidence grow with their studies. They've said how during their practical labs, they've done better because of the hands-on experience."

Zaldivar and McChesney said working at St. Catherine's has impacted their faith. Recently, Zaldivar said she spoke with one of the sisters about vocation and God's plan.

"She was telling me about how she knew what her calling was at 16, and she joined the convent," Zaldivar said. "She then compared it to my calling to be a nurse."

The sister reassured her that she'll know her calling the minute she hears God's calling.

"It gave me shivers in my spine," Zaldivar said. "It was a tough year, so it was great to hear someone explain to me more about faith and how she knew what God's calling was for her."

McChesney said she never used to go to church. Since working at St. Catherine's, she goes to morning Mass on Thursdays with the sisters and has incorporated more prayer into her life.

In March 2021, she found out her dad developed cancer. They were shopping in a Nike outlet store, and she read his MRI report. She told the sisters at St. Catherine's about her dad's health status when she returned to work.

"I started crying, and I told [one of the sisters] that I don't like crying in front of people," McChesney said.

"Let's sit and talk with God," McChesney said she replied. 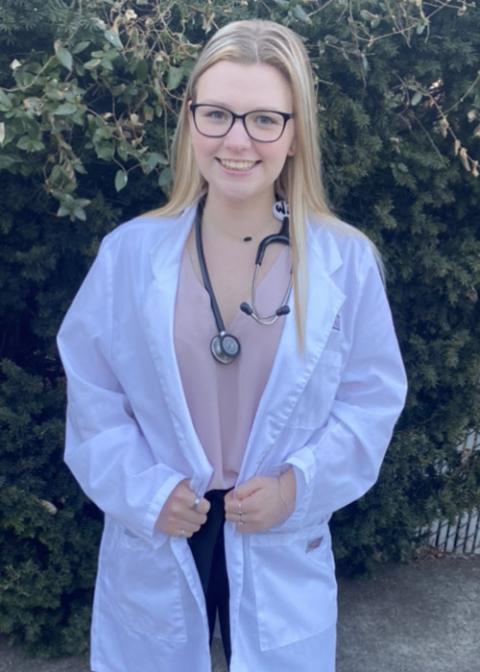 "The sisters taught me that prayer is like a conversation with God. You're talking with him and not to him," McChesney said.

Zaldivar said hearing the sisters' stories is what she loves most about working at St. Catherine's.

"It's something that I try not to take for granted, just because you can always learn something from them," she said. "I think that's something I enjoy, hearing what they have to bring to the table."

Another dream of Beirne's is to have St. Catherine's as a permanent clinical site for the university's nursing program. Kane is also in support of that dream, although the authority is reserved for the convent's administrator.

"I think it would be wonderful," Kane said. "The nursing students bring a freshness. They're young and eager, and they bring a new perspective. The sisters love them. They love seeing youthful people in the building. I would vote for that."

Naturale said if St. Catherine's has any staff vacancies heading into the fall semester, the nursing department would encourage students to apply.

"I will continue to maintain contact with Ellen Kane and hope that as they have any needs that they will let us know," she said.

While Zaldivar and McChesney continue working at St. Catherine's through the summer and into their senior year, they face some decisions as their final year of undergrad approaches.

Zaldivar is considering pediatrics and OB-GYN. However, her experience at St. Catherine's has put the idea of working with the elderly on the possibilities list.

McChesney would like to become a transplant or flight nurse. She said she never saw herself working in geriatrics before working at St. Catherine's, but she is thankful for her job.