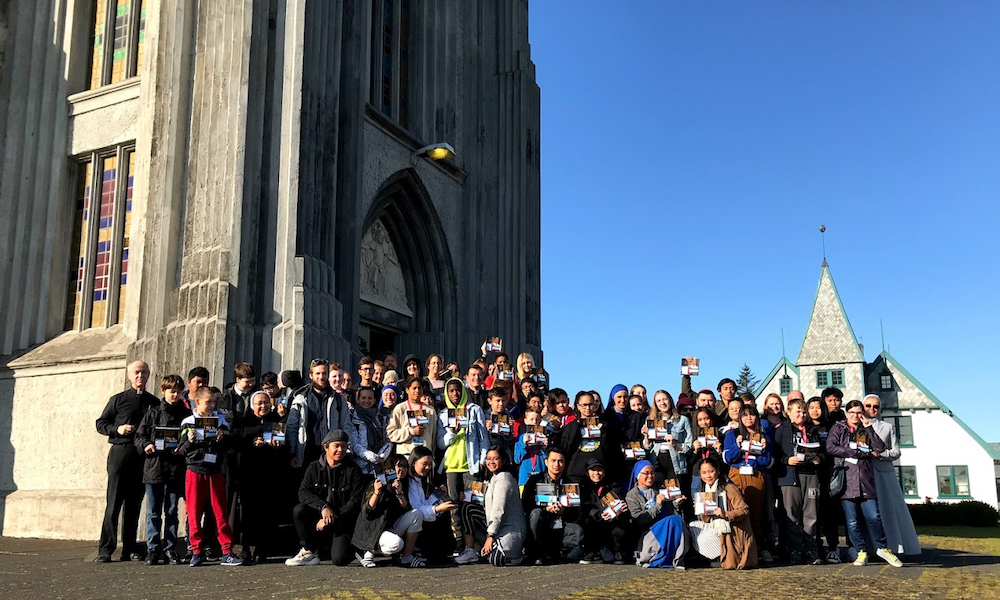 A gathering of Iceland's Catholic youth in Reykjavik, Iceland, for World Youth Day 2019 (Courtesy of the Reykjavik Diocese)

In a harsh and wild landscape where frozen glaciers exist alongside steaming lava fields, religious sisters sent from around the world share their faith with a multicultural community of Catholics.

There are currently 14,500 registered Catholics in Iceland, around 4% of the country's total population. Most of the Catholic community in Iceland is made up of people from other countries, largely from Poland, Lithuania and the Philippines, with more than 50 other countries such as Ireland, France, Argentina and Slovakia also represented. An estimated 2,000 native Icelanders are Catholic, according to Ivan Sovic, pastoral and project manager at the Reykjavik Diocese.

Although Iceland is a wealthy country, the Catholic Church there is poor: Iceland levies a church tax to subsidize religious groups and pays only 90 euros per year per each registered Catholic to offset church costs, Sovic said. This is too little to maintain places of worship, meeting centers and other needs. The church relies on charity to survive, according to the diocese.

Sister M. Celestina of the Most Holy Trinity is one of a group of Carmelite Sisters of the Divine Heart of Jesus tasked with spreading the faith through catechism.

Sister Celestina is an ethnic Croatian from Bosnia. She has been in religious life for 44 years and has spent 34 of those years doing missionary work. She previously spent 15 years in Brazil, a place she dearly loved and intended to make her permanent home before she unexpectedly found herself volunteering to go to Iceland 19 years ago.

"I just loved being in Brazil. I could not imagine leaving Brazil. I had promised the people to die among them," said Sister Celestina. On trips to Croatia, she dreamed of being back in Brazil and would ask her superior every week for permission to return. Her life-changing journey to Iceland was the result of an unexpected and sudden change of heart, which she credits to God.

"When the question of Iceland arose, and I was asked if I could go, I just said: 'When and where am I going to show up?' " Sister Celestina said. "Up to now, I myself can't believe it was so easy. But God can do that, and he did it."

Now, she is based with a group of Carmelites at Akureyri in the rugged northern region of Iceland. The community was founded in 2001. There are only four sisters total: Sister Celestina, two sisters from Brazil and one from Nicaragua.

Sister Celestina's special task is providing catechism instruction to children, some located across regions as far as 125 miles. For four hours on Mondays and three on Wednesdays, the 64-year-old uses Facebook and Skype to connect with students and other members of Iceland's diverse Catholic community across distances of ice caps, mountain ranges and vast rugged tundra. 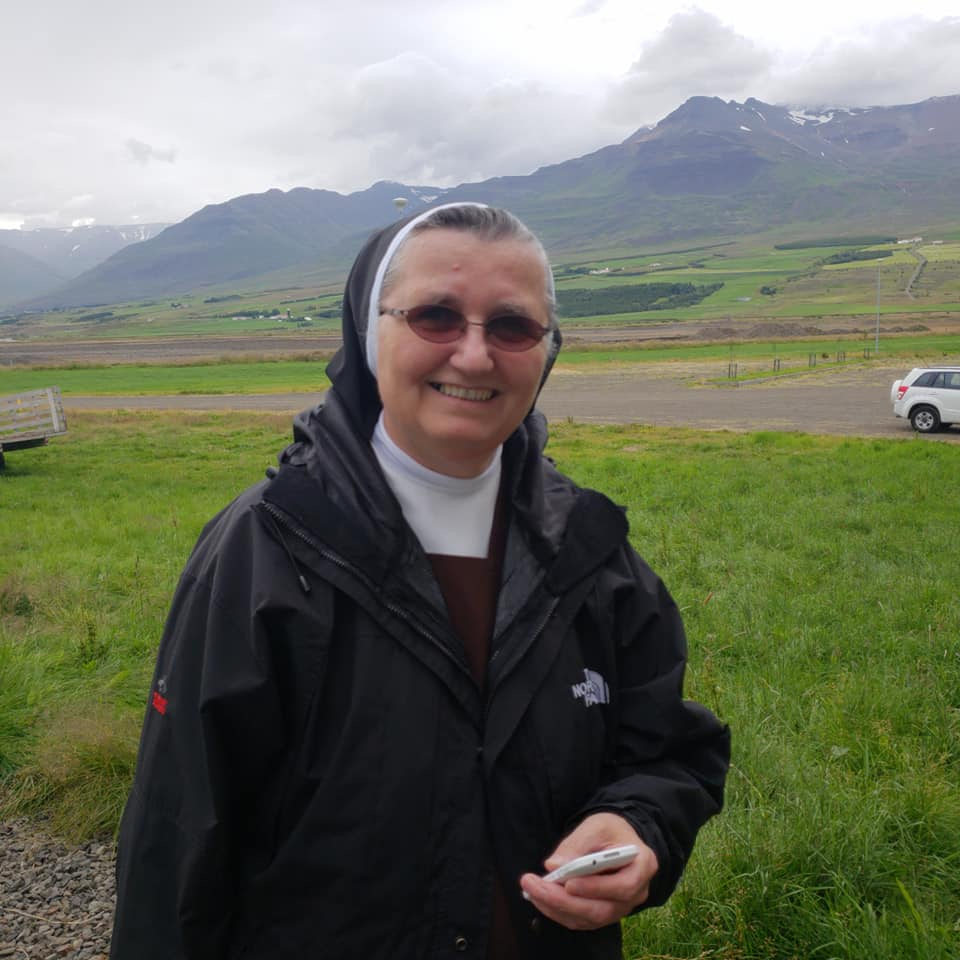 GSR: Why did you decide to become a sister?

Sister Celestina: There is no easy answer to this question, for it is known only by him who chose me. I grew up during times of communist government in former Yugoslavia and as a child believed what we were told at school. When Jesus decided to let me know that he is real, he is there, at that same instant, he wanted me to become a religious sister. Also, he gave me a big grace to never put to the test my reason for being a sister. Never ever did I get a thought to abandon my vocation. And there are people thinking there are not miracles. They should think twice before saying such things.

Who are your favorite patron saints?

My patron saints are the Carmelite ones: first of all, our foundress, Blessed Maria Teresa of St. Joseph, and my name saint, St. Pope Celestine V. Also, there are the patron saints of the countries of my origin and of my mission, countries that God himself gives me.

What work does your group do in Iceland?

The charism of our congregation is to put the contemplative spirit of Carmel of St. Teresa of Avila to the direct service of the needs of the church. We do that through prayer life, home visits, missionary and pastoral work, managing day care for children, visiting homes for the youth and elderly, and retreat centers.

We do pastoral and missionary work in collaboration with the parish priest. We run a day care for up to 10 children from ages 1 to 2. It is not "Catholic" day care — it is just day care for children whose parents are working.

What do sisters in your community enjoy about life in Iceland? How do you find the weather and climate?

We enjoy natural beauties and everything we do. The Icelandic climate is not for everybody. Some sisters do not like it, but there is always someone who appreciates it. One of us has been here in Iceland since the beginning of our community, one for 15 years, another for eight years, and another sister came to Iceland just last January.

What is your job in Iceland? Please describe a usual day for you.

I do mission work, manage catechesis and work in the kitchen. It works very well in a nice comprehensive community as mine is: If I need to let housework fall behind due to missionary or pastoral work, it's all right. I find it finished when I am back!

My day starts at 4:45 a.m. Then, before we gather to prayers, I prepare breakfast for everyone. Then comes morning prayer known as lauds, half an hour of meditation, and then holy Mass. After breakfast, children begin arriving for day care at 7:45 a.m. I cook and, in between, prepare for catechesis. At 11:50 a.m. is lunch. The children go home at 4 p.m. Then we do half an hour of spiritual reading and private prayers that include the daily rosary and stations. At 5:30 p.m. is vespers and half an hour of meditation before supper. At 7:30 p.m., we have community sharing, which we call recreation time; we can also use the time for language-learning. Completorium is the last community prayer of the day, usually at 8:30 p.m. It is a community schedule. We have a recollection day every month and a week's retreat a year.

I personally teach four hours of catechesis at a distance through Skype and Facebook on Mondays and three on Wednesdays. One group of catechesis children comes here in person at Akureyri on Fridays, and five groups come to the filial chapel 44 kilometers [27 miles] from here on Saturdays at the village of Dalvík. I usually arrive there in advance by Friday evening.

Tuesday is a day for visiting the Skype catechesis children, some of them as far as 200 kilometers away. The only exception is once a month, when we visit other Catholics, families or friends. This also happens in wintertime under weather conditions, which means sometimes, we cannot go.

We also accompany our parish priest on Sunday afternoons to far-off communities for holy Mass. Since I am a catechist, I always go on these trips. Other sisters take turns.

With regard to catechesis, another sister teaches two groups, and the parish priest at Akureyri teaches another three. I am in charge of all long-distance catechism teaching. 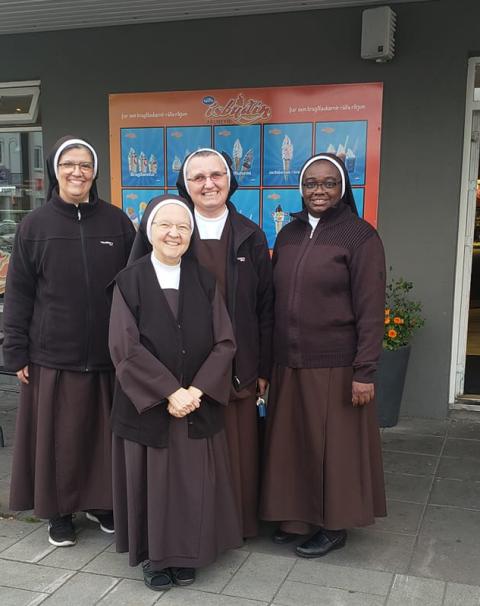 The Carmelite Sisters of the Divine Heart of Jesus in Akureyri, Iceland (Courtesy of the Reykjavik Diocese)

What are some of the big differences about Icelandic culture that you have had to learn and adapt to?

The cold culture and mentality of modern individualism, present all over the world, especially in first-world countries, is very strong in Iceland.

Recently, a man passed away who was a friend of ours who joined into full communion with the Catholic Church. He was ill with cancer for years, and this summer, the battle came to its high point.

I came to know about it through Facebook. Since he was in a hospital in our town, I visited him every day. I also let our parish priest know about him, and he visited the man.

The fruit of this visit was that the man received the sacraments of confession, Communion and anointing of the sick. All the time, he looked calm, serene and smiling.

One day, he told me: "This [illness] is going its own way." Then he was transferred to a little hospital in his village.

After a week, I did not get any news on him. After 10 days, I wrote to him: "Did you get home, or are you still in the hospital?" Then his wife answered me: "This morning, he died in the hospital."

What I was repeating to myself for days was: "Almost 20 years in Iceland, and I still did not get to the Icelandic soul." In other countries I got to know, the people would speak to us openly.