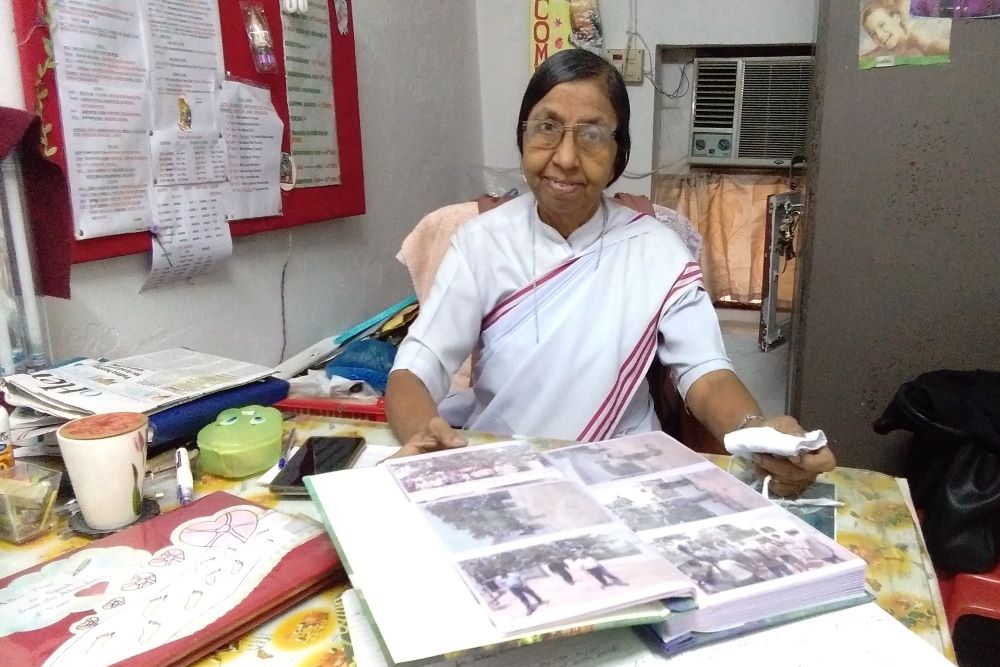 Sr. Judith Meckado of the Franciscan Missionaries of Christ the King displays a photo album with pictures of "A Pilgrimage of the Heart" at her office in Old Goa, western India. (Lissy Maruthanakuzhy)

Sr. Judith Meckado works for "A Pilgrimage of the Heart," a sound and light program that helps pilgrims visiting the Basilica of Bom Jesus understand Catholic faith and saints. The basilica in Old Goa, the former capital of the Portuguese colony in western India, holds relics of St. Francis Xavier.

The member of the Franciscan Missionaries of Christ the King joined the program in 2003. Previously, she created the backdrops for the venue of the eucharistic celebration during the once-in-a-decade exposition of St. Francis Xavier's relics.

Since joining the sound and light project, she has collaborated with her team members to bring more animation to the figures in the show and enhance the program's quality.

The hourlong program highlights the lives of Jesus, St. Francis Xavier and St. Joseph Vaz, a Goa native who worked in Sri Lanka in the 17th century.

Meckado, who lives in Panaji, the capital of the western Indian state of Goa, shared with Global Sisters Report how she uses the program to strengthen people's faith. 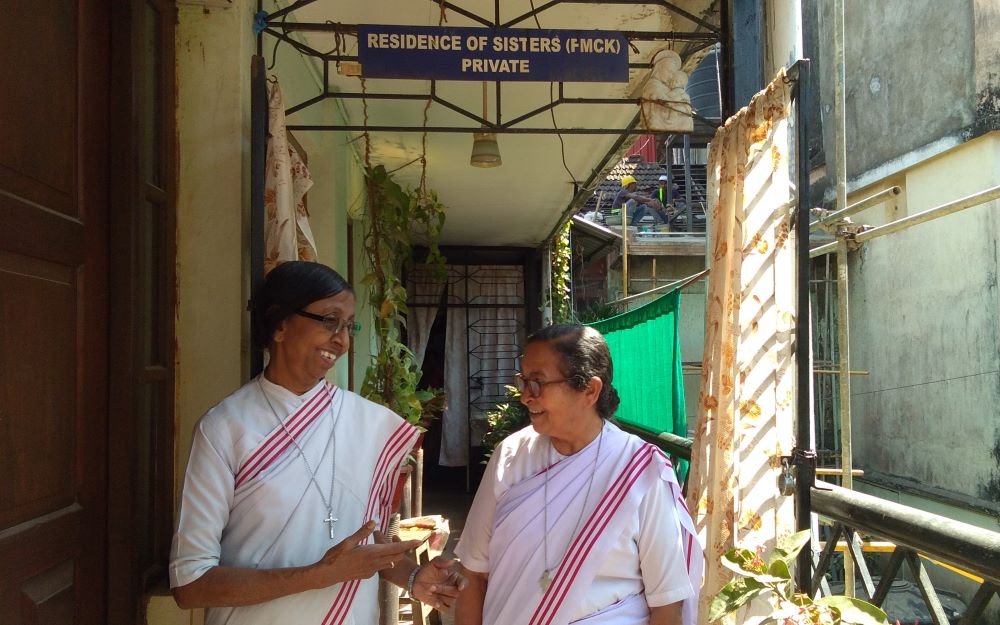 Sr. Judith Meckado of the Franciscan Missionaries of Christ the King talks to another member of her community at their convent in Panaji, capital of Goa state in western India. (Lissy Maruthanakuzhy)

GSR: What were your thoughts when asked to join "A Pilgrimage of the Heart"?

Meckado: I felt that God wanted me to use my talents for his kingdom. I was also happy that my superior general trusted me with this mission. Fr. Valeriano Vaz [the program director] was very welcoming and encouraging.

I see the program as a means of evangelization and spiritual nourishment for all visiting the basilica. Even my daily journey from Panaji to Old Goa [about 6 miles] for work contributes to this mission. I also evangelize myself as I share our faith with people. I learn a lot while talking with people, and I am inspired to help those in need.

What is "A Pilgrimage of the Heart"?

"A Pilgrimage of the Heart" is inspired by Archbishop Filipe Neri [Ferrão] of Goa-Daman, who wanted to give a spiritual perspective to those visiting the basilica. Most visitors are just tourists.

The archdiocese wanted to carry forward evangelization in the present times. The gallery aims at offering the visitor an experience of faith through art and technology. It is the result of work by experts in theology, arts and technology. After about two years of preparation, it was opened to the public in 2002. Father Vaz and Fr. Joaquim Loiola Pereira, secretary to the archbishop, are among those who planned the program.

The program lasts one hour and is made up of 17 scenes depicting some important features in the life of Francis Xavier and Joseph Vaz in addition to the life of Jesus. Journeying through these scenes helps visitors know their lives and missions on Earth. 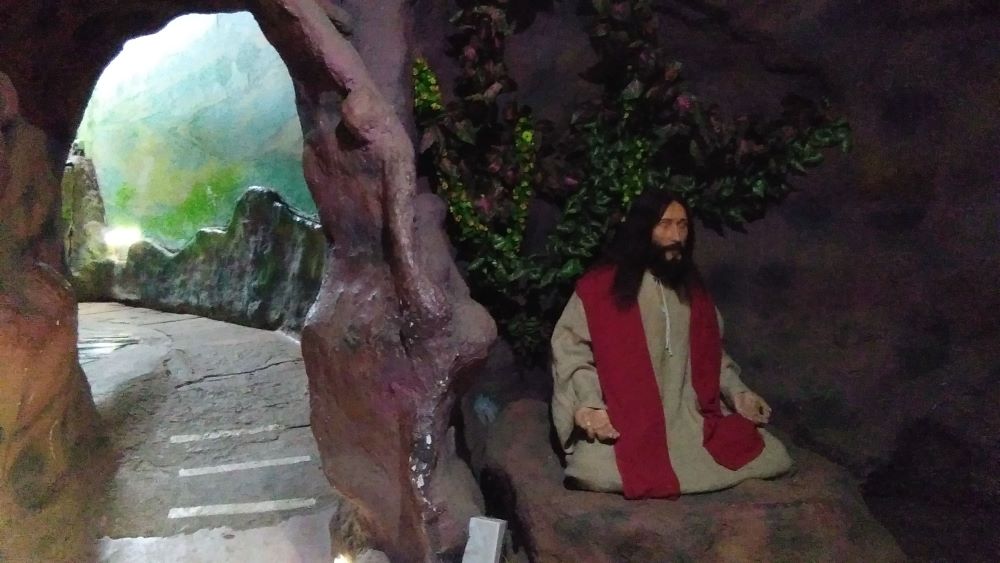 A statue of Jesus, wearing traditional Indian clothes, in prayer in "A Pilgrimage of the Heart" at the Basilica of Bom Jesus in Old Goa, western India. (Lissy Maruthanakuzhy)

Eleven scenes explain the life of Jesus: birth, baptism, beatitudes, transfiguration, Jesus at prayer in a cave, Jesus at Jerusalem, the crucifixion, the tomb of Jesus, the parable of the tree, a market scene where Jesus speaks to the men and women of today. When the archbishop wanted something to mark the Year of Mercy, I suggested to add the Samaritan woman at the well. It was accepted at once.

Two scenes are on St. Joseph Vaz: his childhood and a painting of his journey to Sri Lanka, where he spent most of his life.

A committee of priests and technicians meet regularly to maintain and improve the project.

What changes have you brought to the program?

The statues installed here were made of fiber and brought from Mumbai [approximately 365 miles north]. The dresses and coverings for the statues were made of thick clothes in Goa. Some statues are mounted on tracks for mobility; for example, Jesus meeting a blind man. In the program, they meet each other as the commentary goes on.

The whole setup includes paintings, statues, video and 3D images. We use different colors of focus lights according to the dialogue to give meaning and expression to each scene. Each scene is set up in a separate room in the shape of caves, mountains or hills. Each room can accommodate 15 visitors at a time.

A visitor can visit any of the three stories or all. People are generally happy with the show. They also donate generously for the upkeep of the program.

Initially, coarse garments were used for the statues. I have changed many to lighter clothes of different shades. We wash them regularly. We have two sets of dresses for each statue.

After I joined, we added more movements to the statues according to the dialogue. It required a lot of planning, teamwork and cooperation. It was all possible with the support and encouragement of the initial team that set it up. Without their consent, I could not make any changes.

For example, there is the statue of Francis Xavier sitting under a tree reading on the university campus. Now, the statue stands up in full stature with the open book in the hand when the students come out on the veranda on the first floor of the university building. The technicians did it according to my direction. It took a lot of thinking.

The Last Supper scene had only plates initially. Now, each plate has bread made of thermocol and glasses with wine. Jesus raises his hands with the bread and chalice. The movements were not up to the mark because the bread and the chalice were made of fiber and heavy. I had to change them at least three times as they kept breaking. Finally, I made a plastic chalice and thermocol bread. They will last a long time. The figure of Judas had no movements earlier. Now, he turns his face so the visitor understands the person who betrays Jesus.

At the scene of the crucifixion, the movement of the soldier piercing the side of Jesus is another change I have added. The scenes such as the earthquake at the death of Jesus and the shower of rain when Joseph Vaz prays for rain at the request of the king are very attractive to the visitors. Once, a bishop got wet in the rain from the show. He was thrilled by the experience, although his clothes were fully drenched.

I have also set up a village resembling the one at the time of Joseph Vaz in Sri Lanka.

Who are some prominent people who have watched the program?

Since its opening in 2002, two nuncios and several bishops from Australia, Bangladesh, China, Congo, India, Malaysia, Singapore, Sri Lanka, Tanzania, Thailand and the United States have visited the program.

"Inspiring," "memorable," "edifying" and "excellent" are some comments from the visitors. A technician from Mumbai who visited the show recently said, "You have developed it so much." 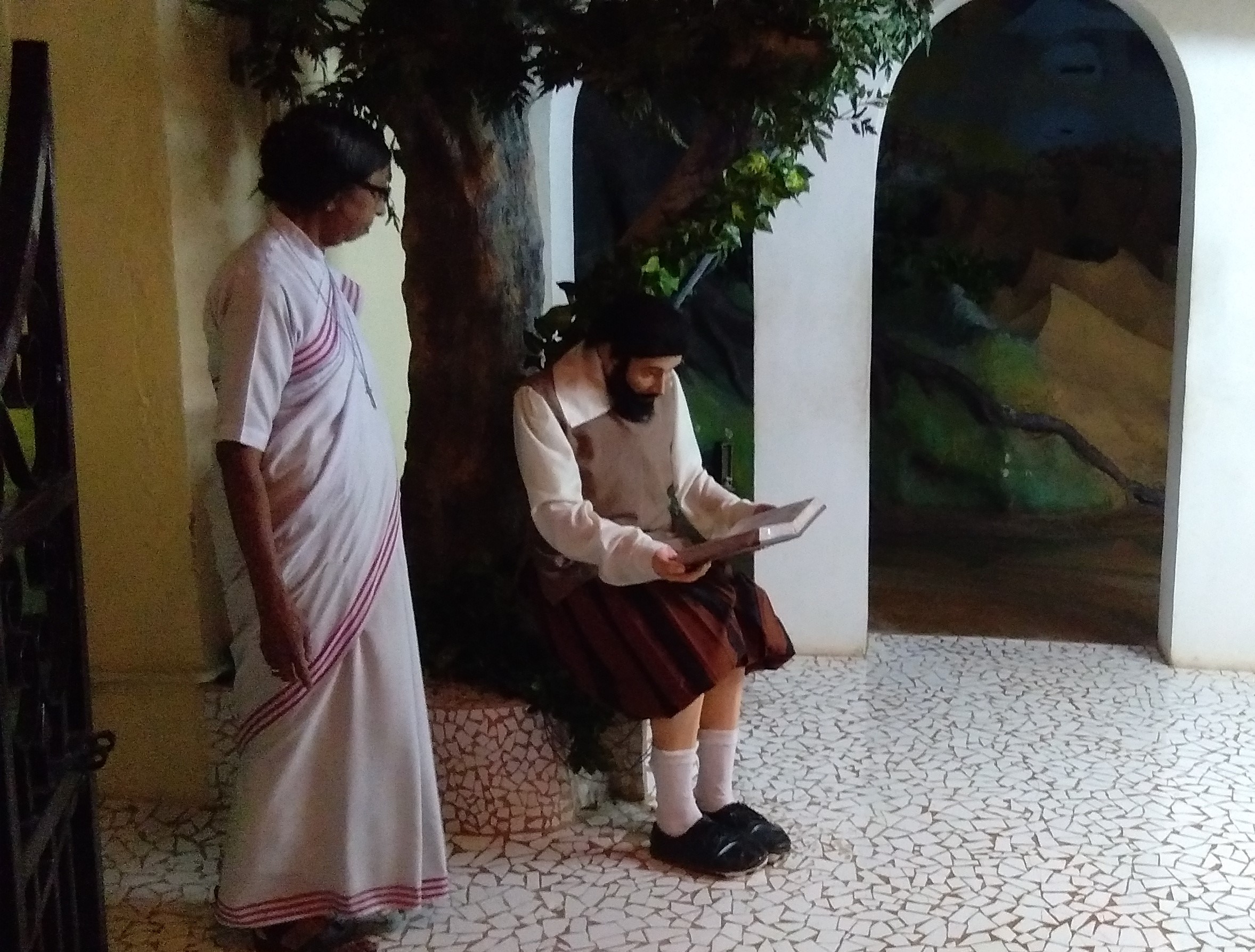 Sr. Judith Meckado of the Franciscan Missionaries of Christ the King looks at the seated statue of St. Francis Xavier in the show "A Pilgrimage of the Heart" at the Basilica of Bom Jesus in Old Goa, western India. (Lissy Maruthanakuzhy)

What have you learned and experienced in the past two decades?

I have learned to be patient, to tolerate each other's ideas and suggestions as we work in a team. And to be firm when it is necessary. We get visitors from around the world, so we have to be cordial and gentle with them to make them feel at home.

The visitors' comments in the book show us how much the program has impressed them.

I also accompany and guide the visitors. Once, a woman knelt down in prayer after the scene of crucifixion. She felt it was real as she experienced the earthquake.

Who are the visitors?

People of all age groups and religions visit the show. Those visiting the relics of St. Francis generally want to learn about his life. Some come with their families.

Before COVID-19, the basilica used to organize retreats for youth and children. They also visited this program.

How has COVID-19 affected the program?

Only 30 groups of 10 people each can watch the program in a day. The floors of the rooms where the scenes are set up are also made people friendly. Even people with handicaps can be brought through.