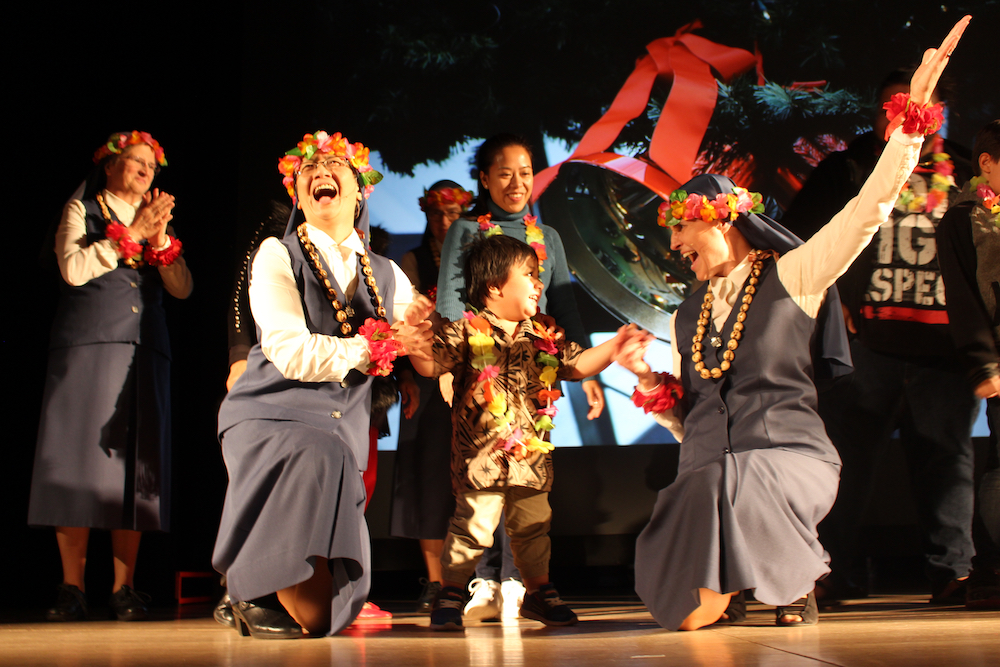 Two-year-old Paniana Avea and his dad, Lipine Avea, danced with the sisters onstage when they asked if anyone wanted to join them. Paniani quickly stole the show — and everyone’s hearts. (Heather Morrison)

As the lights slowly turn on, reflecting off glittery scarves and microphones, nine Catholic sisters, known as the Daughters of St. Paul Choir, begin singing.

"Come on, Jesus, and rescue me," the sisters sing, "Jesus-ifying" the hit rhythm and blues song, "Rescue Me," written and originally performed by Fontella Bass and popularized by Aretha Franklin.

The Daughters of St. Paul Choir's "He is Born" concert is in its 25th year, but it gets bigger and more elaborate each year.

"When I started, we were just standing there with books and not moving at all," said Sr. Nancy Michael Usselmann, director of the Pauline Center for Media Studies in Los Angeles and singer with the group for 24 years. "Slowly over the years, we let go of the book and started trying to get [the sisters] to move a little bit."

This year's concert is in eight cities across the U.S., including Boston, New Orleans and St. Louis.

The sisters are also known as "media nuns," often working and using various forms of media to share their work and the Gospel. They aren't professionally trained singers or dancers, and there's not even an official audition process — it's mostly through word of mouth.

Putting the three-hour production together starts early in the new year. But with all the sisters living in various parts of the country, they don't come together to practice until August.

That's when the hard work starts. For two weeks, the sisters rehearse the songs, choreography and presentation. They also record an album and find the right "outfit" for each song.

"We don't actually change our habits," said Sr. Tracey Matthia Dugas, from New Orleans. "But we do accessorize."

They also have two sisters who work as a sound engineers and to put together their background videos and lighting. The sisters work with tech teams in the cities they are performing in to make sure everything is up to standard. Typically, these teams are predominately staffed by men.

"When the sisters come in and start showing them and talking tech with them, they are just flabbergasted," Usselmann said laughing.

The sisters all come together again in November. And that's it before their first performance. 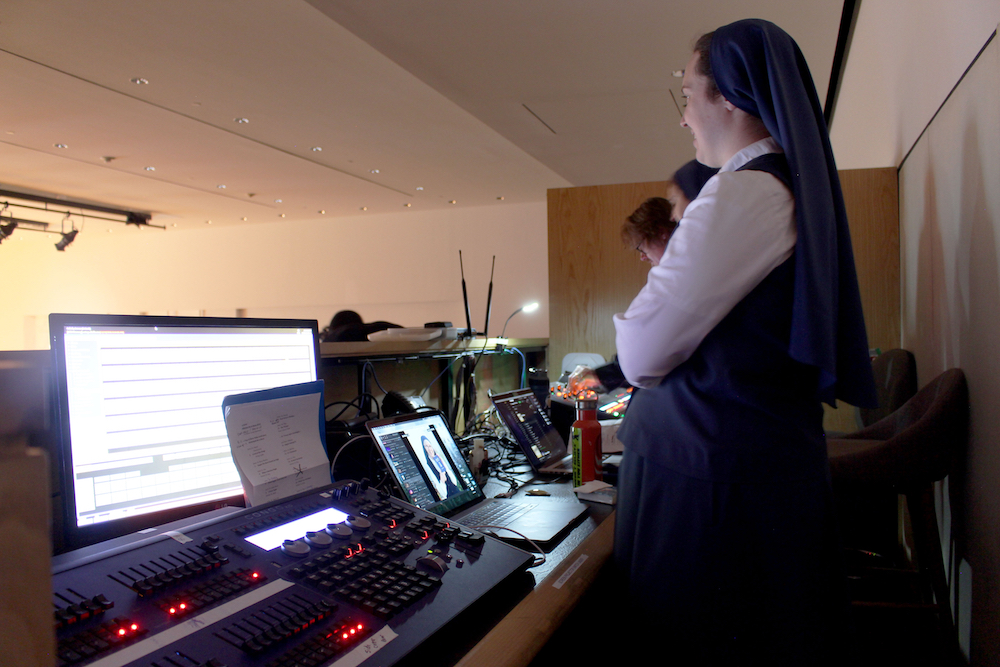 Srs. Carly Paula Arcella and Chelsea Bethany Davis work the tech booth during the cross-country "He is Born" concert tour. The sisters work with the teams on the ground at each location to make sure lighting and sound are up to their performance standards. (Heather Morrison)

"We have this fear that we have no idea what we're going to do next year," Dugas said. But "before you know it, we're performing a full show and with some wild and crazy ideas."

This year one of those "wild and crazy ideas" was to sing Aretha Franklin songs. They also added in a few songs with more difficult choreography, especially during songs led by Sr. Fay Josephine Pele, introducing movements from her childhood in Samoa.

This caught the attention of 2-year-old Paniana Avea, who had traveled about two hours from Riverside, California, with his parents to see Pele and the show. When the sisters asked if anyone wanted to join them on stage, he jumped at the chance — and stole the show.

"It just made my heart burst," his mother, Heaven Allison said, adding he loves the spotlight and is a natural born dancer.

Like all big stars, the sisters have a ritual before each performance: prayer.

"We really pray for all the people we encounter at the concert, that their hearts may be open to receive the message of Christ," said Dugas. "That they may find some elements in that concert that will really give them a little more hope and a little more joy in their lives."

Like they say in their Aretha Franklin mashup, which includes the song "I Say a Little Prayer," prayer is a big part of their performance.

"That's exactly what our concert really is about," said Usselmann. "We pray for all those people we encounter." 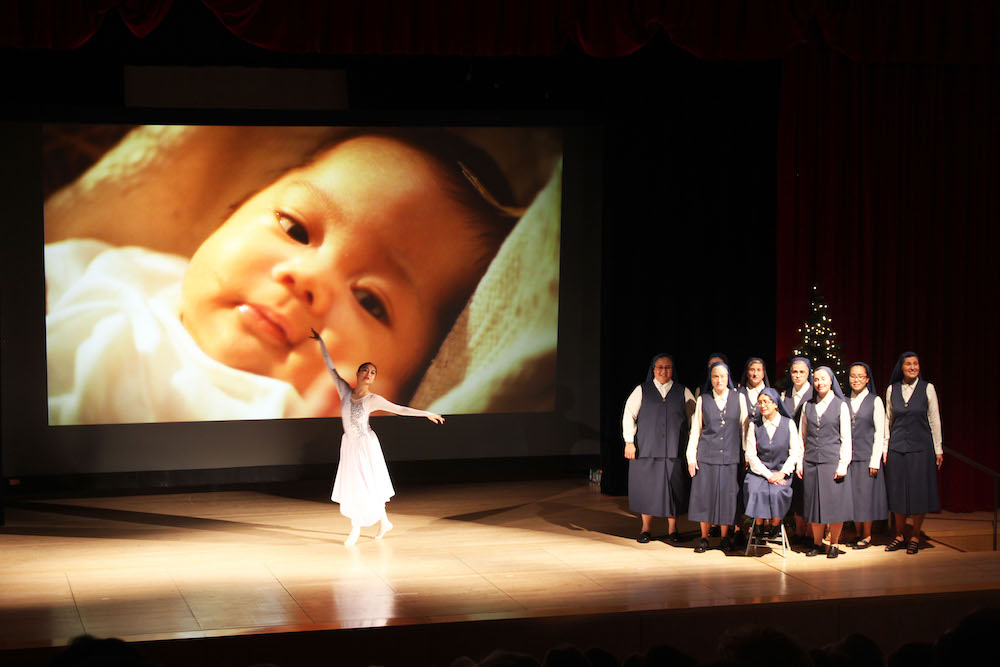 Stephanie Torre, a local ballet dancer, joins the sisters during the "He is Born" concert at Christ Cathedral campus in Garden Grove, California. (Heather Morrison)

People come up to them before shows, after shows and while they're traveling in airports to ask for prayer. And that's exactly what they want people to do.

"We let people know that that's one of our main objectives in meeting them is to be able to pray for them," said Dugas.

She remembers one year a man came up to her after the show and said he had experienced his deepest sorrow and my greatest joy that day. The joy being the show but the sorrow being the fact that his daughter had just had a baby and the baby died.

"I was very humbled by that," she said. "Somehow we were communicating to him something that connected with him even though he had dealt with something so difficult."

Dugas said she stayed in touch with the man and continues to get updates on him and his family and prays for them.

"We're cognizant of the fact that for many people, this is not the easiest time of year," Dugas said. "And yet you still find that there's joy that can transcend even if you're living in difficult times." 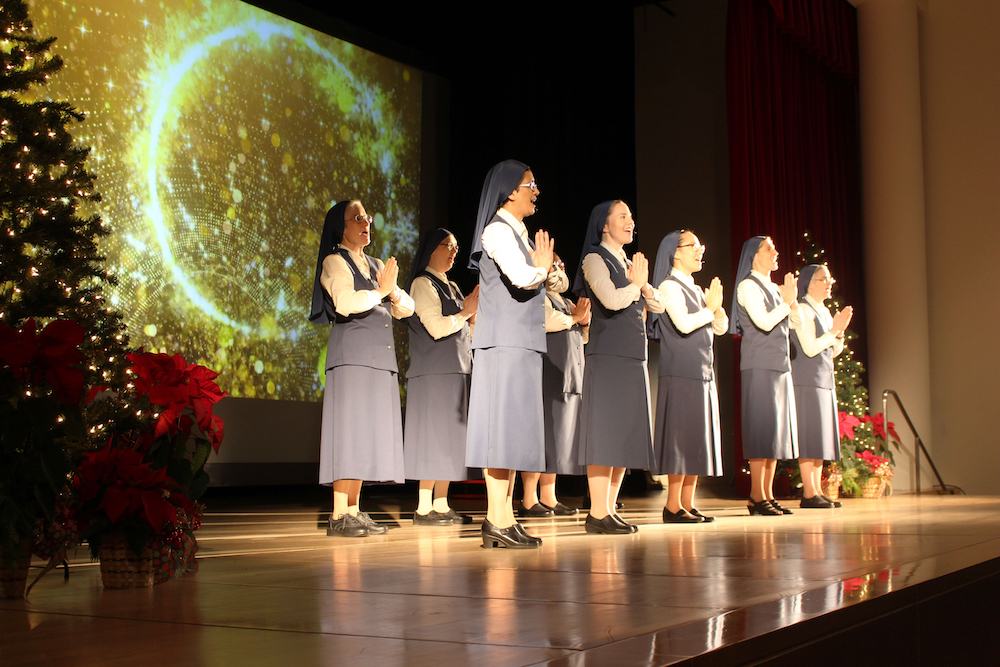 A file photo of a group of Catholic sisters, known as the Daughters of St. Paul Choir, sing and dance during a performance at Christ Cathedral campus in Garden Grove, California. The performance is part of a cross-country Christmas tour. (Heather Morrison)

Some of that joy comes from simply discovering these sisters aren't any more special than the people sitting in the audience.

"God can encounter his people through the reaching out of an ordinary person who is just carrying a belief in him," Dugas said.

And for these sisters that way of reaching people is through music.

"Music is a powerful," she said. "Music has that power to reach down deep in the soul and transform somebody."

[Heather Morrison is a freelance reporter based in Los Angeles.]