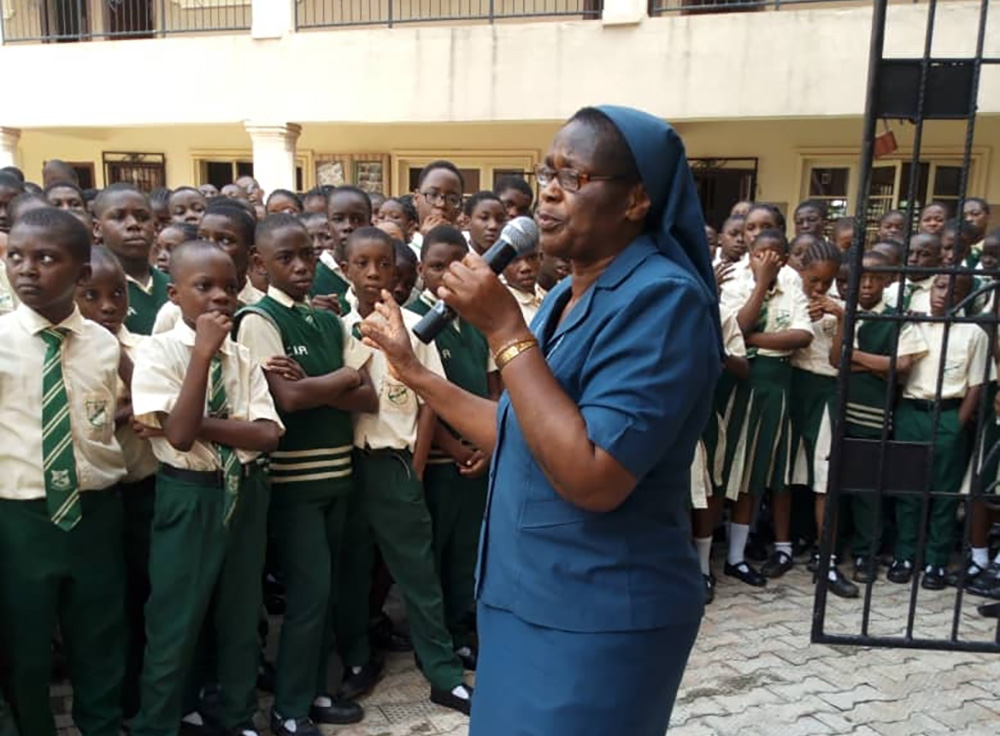 Sr. Bibiana Emenaha of the Daughters of Charity of St. Vincent de Paul speaks to students in February 2019 at a rural school in Edo, Nigeria, on the dangers of trafficking. (CNS/Courtesy of the Committee for the Support of Dignity of Women)

No one thought it could be done. But through sustained advocacy engagement, what was thought impossible became a reality.

For many years, Edo state in Nigeria earned a badge of dishonor as the epicenter of human trafficking in Nigeria. Thousands of young women were taken out of the state, with promises of job opportunities, enviable income and a better life, only to end up as trafficked victims in the hands of their prospective employers.

These predeparture rituals kept the victims in bondage, and even when they had the chance to escape, they remained trapped in their misery out of fear of the terrible things that would happen to them and their families.

From early 2017, and over a period of 30 months, the Africa Faith and Justice Network trained and mobilized a group of committed Catholic sisters to tackle this menace. The network began its activities at the grassroots, conducted town hall meetings, met with the traditional rulers, conducted advocacy activities in secondary schools and met with the association of market women.

These grassroots engagements achieved two things. First, it gradually empowered the communities to talk openly about what was happening in their communities. Second, traditional rulers who had difficulties uniting the communities to address this issue now saw the community unite behind them. This led to the closure of a famous brothel named the A-1 Hotel that served also as a transit for trafficked victims; the brothel owner and his family were ostracized from the town.

The sisters reported these complaints to the state commissioner of police, who summoned the officers to hear the complaint lodged by the sisters on behalf of the local communities.

Following their findings, the sisters moved their advocacy to the governance structure of the state, the governor and his deputy, the minister for youth and special duties, the attorney general, the commissioner of police, advocacy letter to the paramount ruler of the state, the Oba of Benin (the traditional ruler of the Edo people), and religious leaders, and a convention of major stakeholders in the state.

These activities at the local and state levels led to the establishment of an anti-trafficking task force by the state governor. The governor appointed one of the sisters to serve in the task force, which was chaired by the state attorney general.

The sisters conducted statewide sensitization programs for youths and local communities, and produced radio and TV jingles to highlight the plight of trafficked victims. Rescued trafficked victims were brought to youth gatherings to tell their stories.

Because the sisters were focused on achieving their objective rather than on highlighting their activities through press coverage, most people do not realize the role the sisters played in bringing the issue to light, in empowering community leaders to act, and in the introduction and passage of the state anti-trafficking law.

At the Africa Faith and Justice Network's convening of stakeholders in Edo state in November 2019 to strategize for statewide action on human trafficking following the passage of the law, the state attorney general personally told us that she had 20 traffickers in custody, thanks to our network's activities. We then asked the attorney general to simplify the new legislation such that it is available to, and understandable by, the average citizen.

While other organizations played a part in policy changes at the state level, most do not realize the leading role the sisters have played. Under the umbrella of the African Faith and Justice Network, they helped build a grassroots coalition and conduct the comprehensive advocacy activities at state levels that led to these changes. State officials, traditional rulers, and religious do recognize it!

Recent reports show a drastic drop in the number of people trafficked from and within Edo state. The Vanguard news site on Sept. 27, 2021, quoted the wife of the governor of Edo state as saying that Edo state has dropped from the No. 1 state in Nigeria in the number of its trafficking cases, to No. 5 due to advocacies, thanking her husband for responding to this issue. She noted that if Edo state has gotten it right, the rest of Nigeria should get it right.