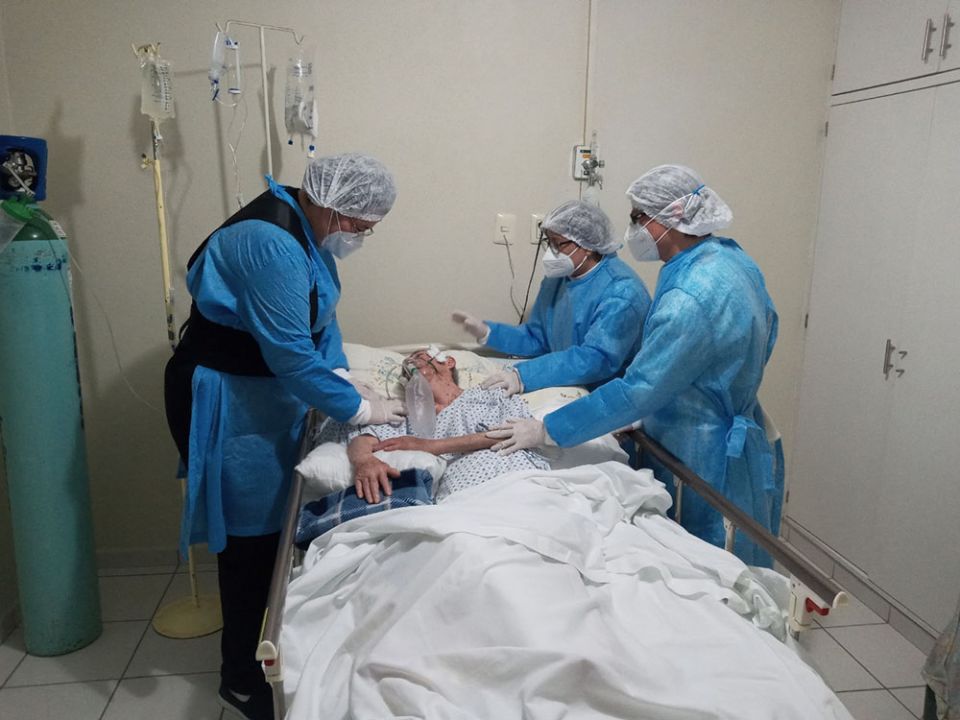 Members of the Daughters of Mary Immaculate of Guadalupe tend to a COVID-19 patient in the sisters' health service. (Courtesy of the International Union of Superiors General)

In the face of a global health pandemic that is worsening in some countries, it is up to the universal church and Catholic sisters to continue and intensify efforts to get people vaccinated, says a sister heading the health task force for the Vatican COVID-19 Commission.

During an April 27 webinar sponsored by the Rome-based International Union of Superiors General (UISG), Sr. Carol Keehan of the Daughters of Charity said the health task force believes those "who daily serve people who live in poverty and who have their trust" are the "best hope for safe and fair distribution of vaccines as well as the best tool for convincing people of the safety and importance of taking the vaccines."

Catholic sisters and other representatives of the church tend to have more credibility at the grassroots than, say, scientists or government officials, Keehan said, because they have been "caring for others before the pandemic, during the pandemic and will be there after the pandemic."

"This gives us a privileged place and the responsibility to help people understand from voices they trust what they need to do to protect themselves and their families," said Keehan, former director of the Catholic Health Association of the United States.

Keehan was among the speakers at the UISG webinar, which focused on health and the economy. It was the second in a series of UISG-sponsored online meetings called "Sisters Empowering Women" that focuses on themes arising from Pope Francis' encyclical Fratelli Tutti.

The global pandemic dominated the two-hour webinar, which more than 300 people attended.

"None of us have ever dealt with anything like this," Keehan said. "In fact, most of us thought our very sophisticated world was beyond the possibility of a pandemic."

The webinar came at a critical point in the pandemic. Vaccinations are continuing in some countries, like the United States, but are moving slowly in others.

For example, The New York Times reported April 27 that slow vaccination efforts in India are hampering the country's efforts to counter the pandemic. Fewer than 10% of the population has received one vaccine dose, the report said, and less than 2% have been fully vaccinated.

"India is now recording more infections per day — as many as 350,000 — than any other country has since the pandemic began," the Times reported.

"Hospitals have been completely swamped. People are turned away by the thousands. Medicine is running out. So is lifesaving oxygen. The sick have been left stranded in interminable lines at hospital gates or at home, literally gasping for air."

Though a global collaboration successfully produced COVID-19 vaccines and diagnostics, a funding shortfall is the cause of vaccination gaps throughout the world, UN News reported April 23.

World leaders "face a choice: invest in saving lives by treating the cause of the pandemic everywhere, now, or continue to spend trillions on the consequences with no end in sight," Tedros Adhanom Ghebreyesus, the head of the World Health Organization, said in an April 23 press release.

Given the magnitude of the global pandemic, Keehan said during the UISG webinar, the Vatican health task force had to quickly focus on two goals: equitable distribution of vaccines and treatments, and reducing resistance to getting the vaccine.

She said there is still "a high percentage of people who have refused to take the vaccine for many reasons."

There are often "exceptionally good reasons for their skepticism," she said, including low-quality or even fraudulent vaccines for other diseases and spotty vaccination efforts by corrupt governments in the past.

On a recent call with African health care personnel, she said, one worker told her that if that country's government was in charge of vaccination efforts, "we wouldn't come."

In a follow-up email to Global Sisters Report, Keehan said the health worker told her, "If the government offered the vaccinations, people would not go to get them. They would not trust the medication and also would think the government was trying to make money."

Given those realities, "helping to assure a reliable infrastructure and combating counterfeit and fraudulent vaccines is a critical step," Keehan said. "Working closely with groups who have the trust of local people because of their history with them is essential."

One-on-one contact between sisters who are not physicians or nurses and people who are skeptical about getting vaccinated should not be underestimated, she said, nor should accompanying people to get vaccinated.

"There are just so many ways sisters can help in the effort," said Keehan, who suggested the sisters getting vaccinated themselves sends a powerful message.

A resource toolkit available on the COVID-19 commission's website provides information about vaccinations and church teaching for sisters, parishes and others. 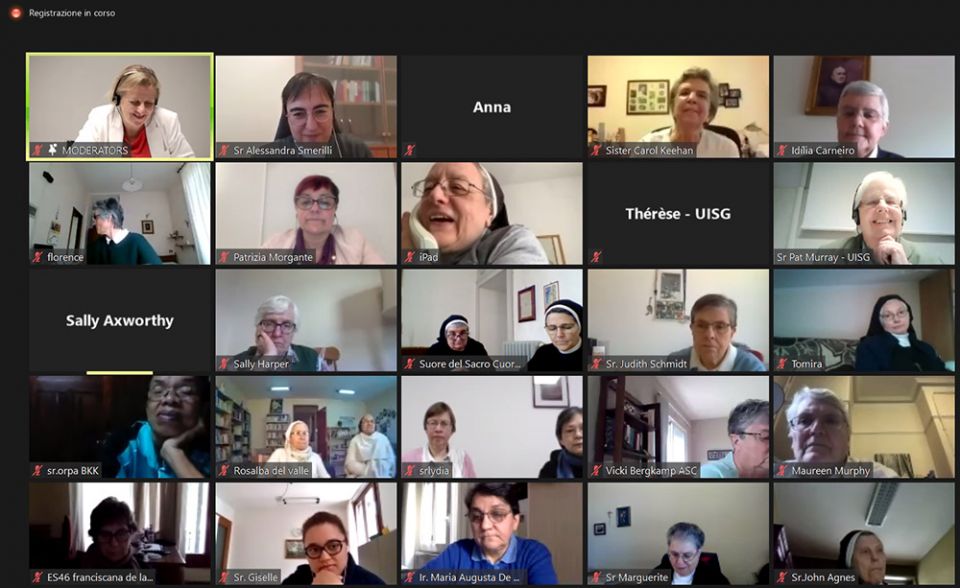 As she did in an April 7 World Health Day symposium, Keehan addressed concerns about the ethics surrounding the vaccination by noting that most vaccines today are made from or were tested using stem cells that originated from a fetus aborted more than 40 years ago.

"Almost all of us have had a vaccine made in this way," Keehan said.

While the church maintains in its ethical teaching that "better ways of testing and producing vaccines should be a goal," she said, "taking these vaccines or administering them to children is not participating or cooperating with the evil of abortion."

"Pope Francis has been very clear that it is a moral responsibility to take the vaccines and protect oneself, one's family and one's community from this deadly disease," she said.

The pandemic was not the only focus of the webinar, which was moderated by Sally Axworthy, the British ambassador to the Holy See, and explored questions of economics and development as well as health.

"We are faced with a sick and divided world that needs healing, communion and solidarity," said Sr. Alessandra Smerilli, undersecretary at the Dicastery for Promoting Integral Human Development. "How can we generate something new? Through new ways of working and following a synodal approach: listening, connecting, inspiring, confronting everyone, inside and outside the church."

Smerilli, an economist and a Salesian Sister of Don Bosco, praised the work of some 2,000 young people of all religious faiths who met online in November for a summit focused on Francis' call for a more just economic model.

In a statement released by UISG after the webinar, Smerilli cautioned against "the rhetoric of recovery," saying that returning to pre-pandemic realities would mean affirming "what was already unjust and unsustainable, a world based on already-existing injustices" in which the most vulnerable suffer the consequences.

"Instead, we prefer the term 'regenerate' — to generate something new, something that brings life and justice for all," Smerilli said in the statement. "And it is not a utopia, but a possible dream. Our hope is that through our work and a rich collaboration with so many other entities and organizations, the cry of the earth and the poor can be heard as the basis for regeneration."

Keehan echoed those concerns, noting in the statement that the four task forces of the Vatican COVID-19 Commission — which focus on economy, ecology, security and health — recognize that before the pandemic, those who were economically impoverished as well as migrants and those being trafficked were more vulnerable than others. As a result, they "have a greater challenge to deal with after the pandemic."

That is why, Keehan said, "Pope Francis wants his commission to look at a broad spectrum of areas that needed to be improved, not just that pertaining to health, in order to create a more just and caring world."